How Israelis are reckoning with Trump’s behavior

Will Trump's popularity in Israel wane after violent unrest rocked the Capitol? 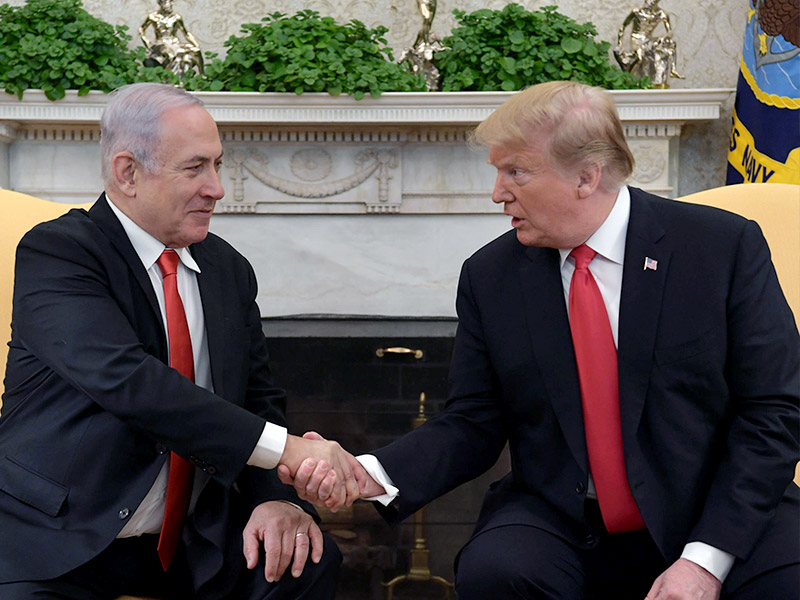 As the world reeled from the shocking scenes of violence broadcast from Washington, D.C., yesterday, Israelis were glued to news of the events with decidedly mixed feelings.

Israel has consistently been one of the countries with the highest level of support for Trump, and Israeli Prime Minister Benjamin Netanyahu has been a noted and dependable ally. Netanyahu has called Trump “the best friend Israel has ever had in the White House.” But were the events this week a step too far for even Trump’s most devoted Israeli admirers?

At a press conference in Jerusalem Thursday morning alongside Treasury Secretary Steven Mnuchin, Netanyahu condemned “the rampage at the Capitol yesterday” as a “disgraceful act,” without mentioning the president by name. But in remarks from the same event released separately by his office, Netanyahu praised “Trump and all of you in the administration for all you have done and are doing for peace.”

Former Israeli Ambassador to the U.S. Michael Oren told Jewish Insider that over the past four years, “Israel has faced an impossible dilemma: how to embrace the historic achievements of the Trump White House while disassociating from its incendiary domestic acts.” He noted the remarkable timing of this week, during which “at the same time that the administration brokered a treaty between Israel and Sudan, Trump supporters were storming the Capitol.”

“Israel must welcome the first while deploring the second,” Oren added.

Former Israeli Consul General to New York Dani Dayan, a past leader of the Yesha Council settler movement, made his feelings very clear in a radio interview Thursday morning.

“To call a settlement in the Golan Heights after Donald Trump was a step too far from the beginning,” Dayan told Army Radio about the largely symbolic “Trump Heights” settlement established in 2019 in recognition of the president. “It was embarrassing. I did not enjoy publicizing that in New York.” And keeping that reminder around now, Dayan said, “is extremely embarrassing.”

Dayan admitted that when it came to policy on Israel, “Trump was a diplomatic miracle.” But when it comes to American democracy, “not only now but from the beginning [of his candidacy], it has been a train wreck.”

Former Knesset Member Dov Lipman, who now works as a reporter and Israel advocate, told JI that Israelis were shocked and horrified by the events in Washington this week.

“Israelis were very, very clearly very shaken by it,” said the American-born Lipman. “But I still believe that Israelis are able to make a distinction between that and being thankful for things that Trump has done for Israel.”

But Lipman suggested that talk in Israel of naming landmarks after Trump may now dissipate, “because everyone feels that what happened yesterday is such a horrible thing.”

Lipman stressed that he does not take sides in American politics, and would not state if Trump is personally responsible for the violence in the Capitol this week. “Anytime that I’ve said anything positive about him it wasn’t in any way reflective about him as the president of the United States or as a person, it’s just being thankful for things he has done for Israel.”

Opposition Leader Yair Lapid was one of the first Israeli officials to weigh in on the shocking scenes of violence emanating from the Capitol on Wednesday.

“I’m deeply saddened and shocked by the images from the United States,” he tweeted. “My thoughts are with all my friends in Washington tonight. We hope to see order restored and the transition of power completed. America needs to go back to being a role model for democracies across the world.”

Diaspora Affairs Minister Omer Yankelevitch tweeted on Thursday that the scenes of violence “shocked all those who believe in the basic principles of democracy,” and issued a call to “remain united in condemning violence and protecting the rule of law.” Asked to elaborate on the events’ potential impact on the Israeli-U.S. relationship, Yankelevitch declined to comment.

Former Justice Minister Tzipi Livni, whose future political career is the subject of much speculation, tweeted in Hebrew on Wednesday that: “it’s crazy what is going on right now in the U.S., but the good guys won in a democratic election, and the inconceivable violence of mass incitement will be relegated to history,” adding in English: “Democracy will prevail.”

Shmuel Rosner, a journalist and New York Times contributing opinion writer, told JI that “Israelis understand that this was a shameful event — and now must do what people with good sense always do: see that things are complicated, and that a president that was great for Israel is problematic for America.”

“Leaders aren’t black or white, they are often both,” Rosner added. “I assume most Israelis are mature enough to see this.”

But Marc Zell, the chairman of Republicans Overseas Israel, denied that Trump was responsible for the “outrageous and disgusting” behavior that took place in the Capitol.

“I don’t think he was encouraging violence,” Zell told JI, blaming the riots and looting on “a small group of provocateurs” who only served to distract from Trump’s efforts “to take action to remedy the problems of the election.”

Zell said he feels that most Israelis are grateful to Trump for his actions in support of Israel over the past four years.

“I think most Israelis would probably identify with what the prime minister said today about the violence in Washington,” he added. “The prime minister was careful not to blame the president — and so am I.”