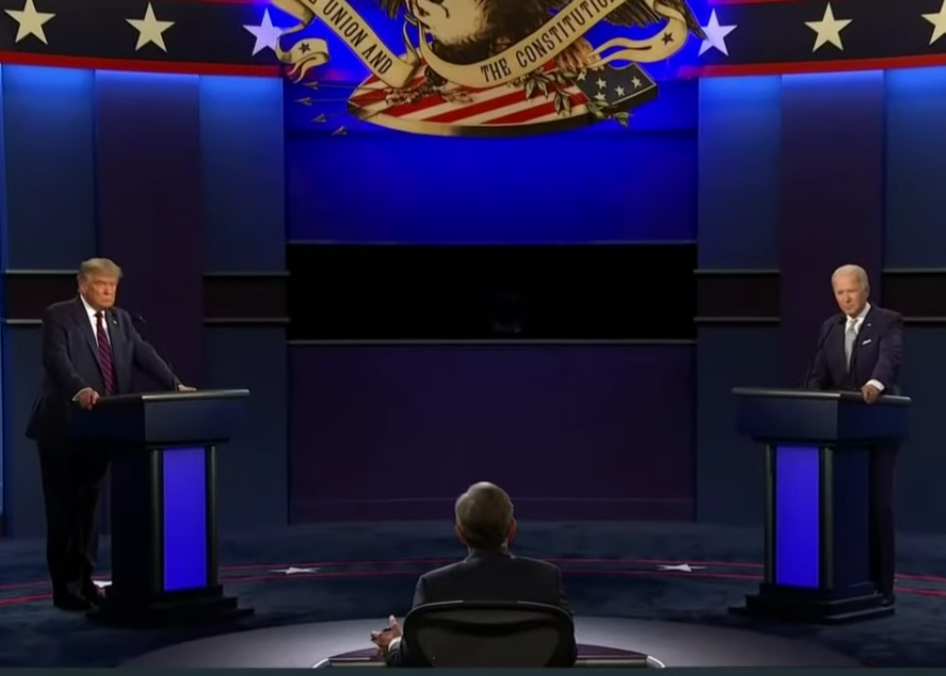 President Donald Trump and Democratic presidential nominee Joe Biden repeatedly talked over each other and traded personal insults in the first televised presidential debate in Cleveland, Ohio, last night. Trump repeatedly and insistently interrupted both his opponent and the moderator, while Biden told the president to “shut up” and referred to him as a “clown.”

Key moment: When pressed by moderator Chris Wallace to condemn white supremacists, Trump demurred. “Sure, I’m willing to do that,” the president said, adding, “I would say almost everything I see is from the left wing not from the right wing.” When pressed again to say he condemns them, Trump asked: “What do you want to call them? Give me a name, give me a name, go ahead, who do you want me to condemn?” Wallace responded: “White supremacists and white militias,” and the president answered: “Proud Boys, stand back and stand by,” referring to a far-right group classified by the ADL as a violent hate group.

How it played: Axios executive editor Mike Allen described the debate as a “hot mess of name-calling and rude interruptions, wildly out of control and incoherent.” New York Times reporters Jonathan Martin and Alexander Burns labeled it “a chaotic” debate between two major party nominees who “expressed a level of acrid contempt for each other unheard of in modern American politics.” CNN anchor Jake Tapper remarked: “That was a hot mess, inside a dumpster fire, inside a train wreck.” Conservative commentator John Podhoretz posited that as the underdog, “Trump was incredibly unpleasant to watch, and Biden wasn’t.”

Reaction: Republican pollster Frank Luntz told Jewish Insider after moderating a panel of undecided voters: “Our undecided voters found this debate a real turnoff. It is discouraging people from voting. Tonight, millions of Americans will go to sleep with tears in their eyes and a hole in their soul.” Former Rep. Steve Israel (D-NY), a Biden campapign advisor, called Trump’s “’stunning refusal” to unequivocally repudiate neo-Nazi and white supremacist groups “chilling.”

Heard yesterday: During a panel discussion moderated by Aaron David Miller of the Carnegie Endowment for International Peace earlier Tuesday, CNN contributor Amanda Carpenter expressed her amazement that foreign policy has not been played up as a major issue in the presidential election. Some of the most important political events during the Trump presidency, she said, “had been firmly in the foreign policy wheelhouse,” pointing to the Robert Mueller probe into Russian intervention of the 2016 election and the Ukraine scandal that led to Trump’s impeachment. “What is really interesting to me, from my vantage point as a never-Trump Republican, is that the only times that his supporters on Capitol Hill — who are also responsive to constituents and voters — the only times they have really broken with him have been on foreign policy and election issues,” Carpenter explained.

An issue of debate: Carpenter noted that Trump has some foreign policy achievements to “brag about” in a debate with Biden, in particular the Israel-UAE normalization deal, the relocation of the U.S. Embassy to Jerusalem, the U.S. withdrawal from the Iran nuclear deal and the killing of Iranian Gen. Qassem Soleimani. “[Trump] would be sort of silly not to present that framework,” she said. “That doesn’t mean Joe Biden doesn’t have responses to that. But that would be what a healthy foreign policy debate would look like, from a president with the powers of incumbency and achievements to talk about.”