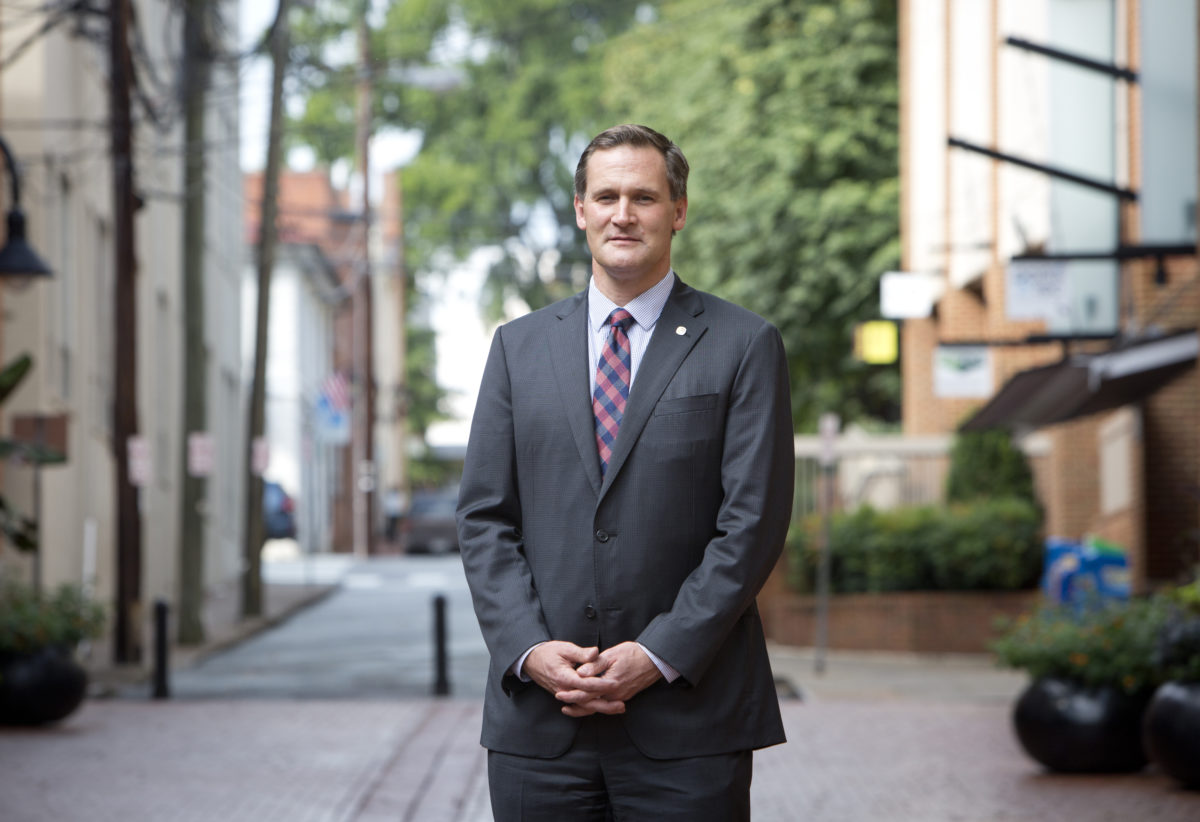 Charlottesville Mayor Michael Signer poses for a photo in the city in August 2017.

Former Charlottesville Mayor Mike Signer saw the ticking time bomb in the weeks leading up to the deadly “Unite the Right” rally on August 12, 2017.

It started in the spring of that year, when white nationalist Richard Spencer led a torch-bearing protest against the City Council’s decision to remove a Confederate statue. That was followed by a violent protest organized by the Ku Klux Klan in July, six weeks before the infamous rally where James Fields drove his car into a crowd of counterprotesters, killing Heather Heyer.

“All of these forces and the national spotlight that was trained on Charlottesville, and both forces on the left and the right being galvanized to come in to either attack or defend [the city] in pre-military fashion, were going to combine to create a catastrophe, which is what happened,” Signer said in an interview with Jewish Insider marking the third anniversary of the neo-Nazi march.

Signer, who served as mayor from 2016-2018, detailed the events surrounding the rally in a recent book, Cry Havoc: Charlottesville and American Democracy Under Siege. “It was, hopefully, a wake-up call on how dangerous this movement needs to be and how much more we need to focus on it using the levers of government,” Signer said.

Fast forward three years, and Signer sees multiple reasons American Jews should be “extremely concerned” about the rise in online hate and antisemitic violence. Pointing to the deadly attacks in Pittsburgh, Poway and New Jersey in recent years, Signer said targeted attacks carried out by lone wolf assailants who are radicalized online is “just one phenomenon that we should be gravely concerned about.”

The recent clashes between police and racial justice protesters also create a challenge to a “functioning democracy and a safe, civic space from political violence,” Signer said. “And my grave concern is that we’re slipping into an arena where it’s becoming more common to have open street fighting, unmitigated conflict and clashes with police, and anarchism across the board.”

His third concern is a slow and reactive policy by online platforms against homegrown terrorism, hatred and extremism and violent speech. Signer told JI that as a Jewish public official he still gets daily antisemitic threats on Twitter.

In 2016, Signer argued against the electoral college handing over the presidency to Donald Trump after the election. And he said he “took it personally” when Trump said there were “very fine people on both sides” of the 2017 rally.

“When he talked about neo-Confederate sympathizers as good people, there was a reason that he was doing that, which is that it helps him with his base dispersed among these states that he eked out a win with the electoral college with — and he likes playing the people who see white nationalism as their cause,” Signer said.

The former mayor told JI he was “deeply encouraged” to see former Vice President Joe Biden use Trump’s response to the August 2017 protests as a key theme of his presidential campaign. “I was glad to see him situate Charlottesville so prominently as the case study of what is to be feared most, if we go further down the road of Trumpism.”

Signer, 47, only embraced his Jewish identity later in life. “As I got older, I found myself gravitating toward Judaism on many levels, in terms of faith and practice and my view of Israel,” Signer told JI. “As I grew public, there were junctures where I had to make decisions about how much this was going to be a first-glance part of who I was in public.”

The first time he spoke publicly about being Jewish and about facing antisemitism as a child was in his State of the City address in January 2017. Following that speech, Signer said, Spencer and David Duke and other white nationalists started highlighting his Judaism, which prompted the national media to pick it up and ask about it.

“It was one of those interesting class points where you say this will be a part of my public identity going forward on a national stage,” Signer recalled. “That was something that 20 years ago would have frightened me for the same reasons that I was an assimilationist as a kid, growing up in the D.C suburbs in a very WASPy area.”

Signer said that visiting Israel in 2008 and 2013 and studying the Bible led to a point where his Jewish identity “no longer scared me. I felt very comfortable now that I had a model of toughness, resilience, fortitude and pride.”