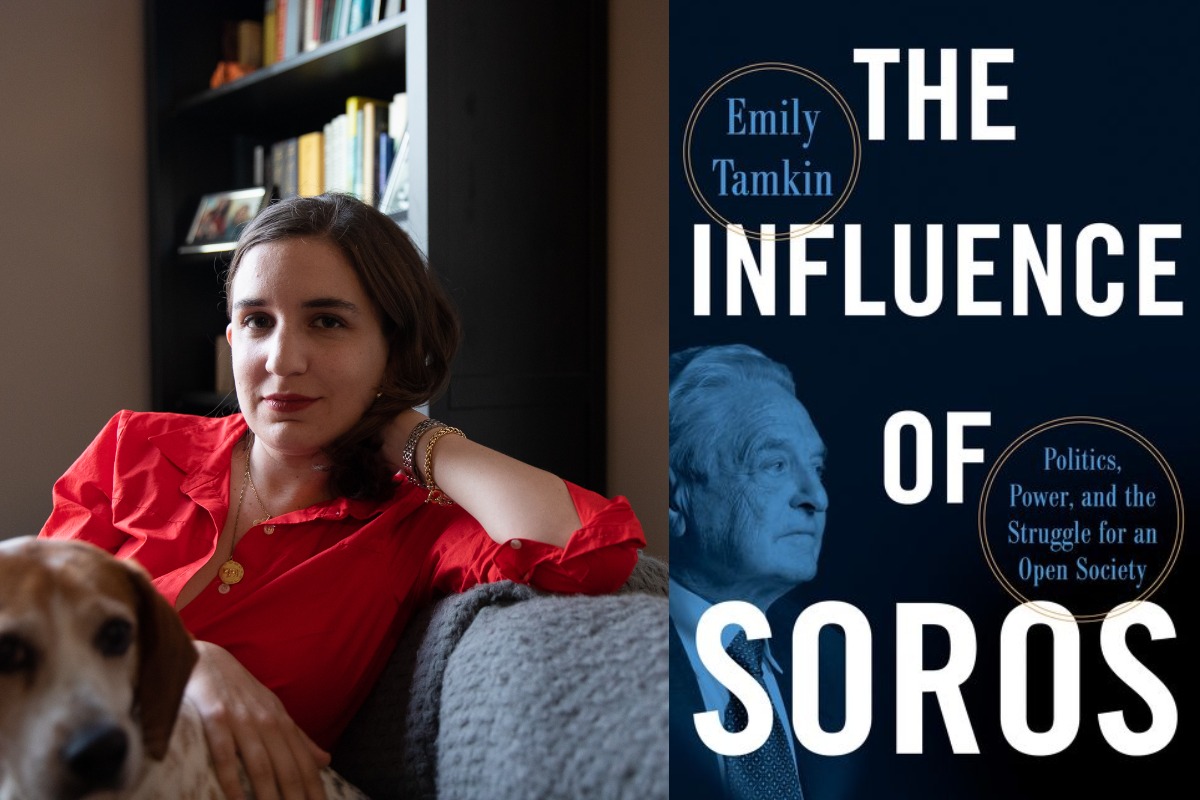 If you believe the many conspiracy theories, George Soros is a very busy man.

For years, Soros has been accused of toppling governments, sowing unrest, financing protests, colluding with foreign regimes and working toward global domination. In reality, the 89-year-old billionaire hasn’t quite managed to do everything he has been accused of. But he has worked, extensively, for more than 40 years to spread his beliefs in countries around the world.

In her debut book, The Influence Of Soros: Politics, Power, And The Struggle For An Open Society, Emily Tamkin takes a look at the extensive activities of the billionaire financier and philanthropist over many decades.

Tamkin, the U.S. editor for The New Statesman, traces the arc of Soros’s life and career as a hedge funder, currency trader, philanthropist and social activist. Along the way, she wrestles with the idea that Soros’s immense power and influence have enabled him to have an outsized voice in many countries, movements and debates — directly contradicting the core tenet of the “open society” he promotes. He has, by Tamkin’s account, poured over $32 billion — more than the GDP of dozens of countries — towards promoting his ideals around the globe.

“The rumors, lies, outright conspiracy theories, and even sweeping statements about 89-year-old George Soros are so omnipresent and overwhelming that they threaten to obfuscate the truth,” writes Tamkin in the introduction to the book, “which is that George Soros has wielded and continues to have tremendous influence — just not in the ways that his most famous detractors would have us believe.”

And even since Tamkin began working on the book in early 2019, the conspiracies surrounding Soros have continued to pile up.

“In the past two months, as we’re gearing up for publication, all of a sudden you have that Soros is somehow profiting from COVID-19, that Soros is behind the Black Lives Matters protests,” the author told Jewish Insider in a recent interview. “There’s always some new conspiracy theory, but what I will say is that, though they are new, there are strains of the familiar in them.”

The Influence of Soros dedicates more space to examining what Soros has done than debunking all of the things he has not. Tamkin explores his early life in Hungary, his funding of political dissidents and university scholarships, his vault to infamy in 1992 as the “man who broke the Bank of England,” and the establishment of his network of Open Society Foundations around the world. The book goes into detail about his humanitarian work in Sarajevo, his turn toward partisan politics in the 2004 U.S. presidential election and even his establishment of the only U.S.-based Open Society field office — in Baltimore — to influence drug policy.

Tamkin also traces the antisemitism Soros has faced throughout his life, from his youth in Hungary during the Nazi occupation to the campaigns waged against him everywhere from Slovakia to Malaysia, Turkey and — after he poured money into the 2004 election in an effort to defeat President George Bush — the United States.

The most insidious of these theories, she posits, is the debunked claim that Soros collaborated with the Nazis when he was a 14-year-old boy in Hungary.

“Every time somebody says that to me I kind of am shocked anew,” Tamkin said. “To accuse somebody who had to hide out as a very young teenager under a different name and whose father secured documents for his family and for friends as they just tried to survive this atrocious moment in history — to then say to that person, ‘oh well you were collaborating with the Nazis,’ is just so ugly to me.”

In the book, Tamkin also explores Soros’s reluctance to fund Jewish organizations, stemming, she believes, in part from an experience with The Jewish Board of Guardians in London in the late 1940s. Soros was first turned down for assistance by the charity, and then successfully lied to them in order to receive funds.

“He had this negative experience early on with Jewish charities,” Tamkin said. But more broadly, she pointed out, his spending habits reflected the lessons he took away from the persecution he experienced both before and during the Holocaust in Hungary. “His takeaway from being persecuted for his identity was to look at universal suffering,” the author said. “To him, that was his understanding of ‘this is what my Jewish identity means. It means that I was persecuted and I want to help others who are persecuted regardless of their race, religion or ethnicity.’”

Soros made a rare exception in 1992, when he gave $50,000 to a Jewish humanitarian organization in Sarajevo, reports Tamkin. But, the head of the organization noted, Soros made him promise that the funds would benefit Jews and non-Jews alike.

More recently, Soros has also given small sums to left-wing Israeli groups, including J Street and the New Israel Fund. He has been harshly critical of Israeli activity, labeled Israel as a “perpetrator of violence” and has called on the U.S. and Israel to recognize and negotiate with Hamas.

It is that activity that has fueled criticism and sometimes conspiracy theories from Israeli Prime Minister Benjamin Netanyahu and other Israeli government officials. Netanyahu, Tamkin says, was the one who introduced Hungarian Prime Minister Viktor Orban — who has waged a long, antisemitic campaign against Soros — to Republican political strategist Arthur Finkelstein, who helped craft Orban’s anti-Soros messaging.

Tamkin is careful to note that Netanyahu’s support of Soros-bashing does not mean the conspiracy theories are not antisemitic.

“When someone like Netanyahu gives the green light to Orban to use antisemitic conspiracy theories, it basically says that there’s one understanding of how you can be a Jewish person,” said Tamkin. “And if you’re not that, then we can use this language against you and not feel like it’s our responsibility.”