‘To argue that the prime minister of Israel was not supportive of the decision of Trump to recognize Jerusalem is ridiculous,’ former Israeli Ambassador to the U.S. Ron Dermer told Jewish Insider 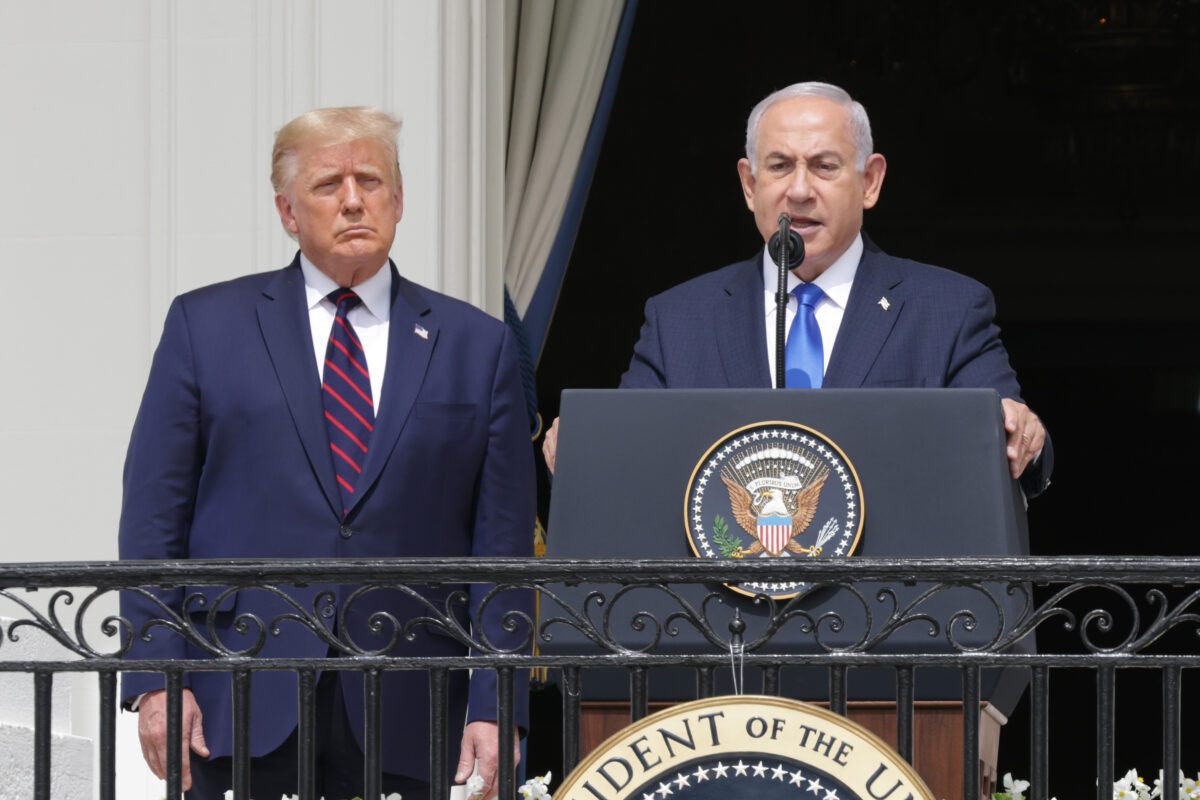 Prime Minister Benjamin Netanyahu speaks as President Donald Trump looks on during the signing ceremony of the Abraham Accords on the South Lawn of the White House September 15, 2020, in Washington, D.C.

Speaking to Jewish Insider last week after Breaking History: A White House Memoir, Kushner’s 500-page recollection of his time in the White House, hit shelves, former Israeli Ambassador to the U.S. Ron Dermer and, separately, a former Trump White House official, who asked that his name not be used so he could discuss sensitive matters, concurred that even the strongest relationships can experience miscommunications or disagreements. Throughout Trump’s four years in office, both former officials emphasized, communication was good and relations very warm.

“I think Jared was trying to relay this ultimate sentiment in his book,” said the former Trump administration official, who worked closely with Kushner in the White House. “The idea was that even though there were moments of discomfort and disagreement, we did accomplish some pretty amazing things together.”

A large portion of the book deals with the Abraham Accords – the establishment of normal relations between Israel, the United Arab Emirates and Bahrain two years ago and the follow-up agreements with other Arab and Muslim-majority states, which are largely credited to Kushner.

However, Kushner, who is also Trump’s son-in-law, also recalls two specific incidents when Trump and Netanyahu appeared to be at odds despite public perceptions that both were populist politicians who shared a similar approach and worldview.

The first was in December 2017, ahead of the U.S. decision to recognize Jerusalem as Israel’s capital and move its embassy there from Tel Aviv; the second was when Netanyahu, Kushner said, shocked Trump and Kushner by declaring his intention to annex parts of the West Bank as the administration rolled out its Israeli-Palestinian peace plan.

In describing events leading up to Trump’s decision to move the U.S. Embassy, Kushner recounts a phone call the president made to the Israeli prime minister: “On December 5, the day before the planned announcement, Trump called Bibi and told him the news,” he writes, using Netanyahu’s popular nickname. “Bibi said he’d support the move, if that’s what the president wanted to do, but he didn’t sound overly enthused.”

“As he continued his conversation with Bibi, he wondered aloud why he was taking this risk if the Israeli Prime Minister didn’t think it was important. Trump’s voice hardened into a stern tone: ‘Bibi, I think you are the problem,’” writes Kushner.

Some reviews of Breaking History have noted Kushner’s recollection is in keeping with a belief that the embassy move was more for Trump’s benefit – a gift to his evangelical Christian supporters – and less for Israel, but with Kushner’s retelling of that call, some are now suggesting that Netanyahu was actually against the move.

“I haven’t read Jared’s book, but to argue that the prime minister of Israel was not supportive of the decision of Trump to recognize Jerusalem is ridiculous,” Dermer told JI in an interview. “We made it clear that we supported this decision from beginning to end.”

Dermer, who served in Washington from 2013 until 2021, admitted that moving the embassy wasn’t necessarily Israel’s top priority at the time – that would have been Iran – but, he said, “We were fully supportive of this decision.”

Netanyahu appearing “lukewarm” in this specific phone is a “subjective” impression, Dermer continued. “Maybe he [Trump] got the wrong impression,” Dermer said.  “When I read [the reports] about Jared’s book giving the perception that Netanyahu didn’t really want this decision to happen – that is totally false.”

The former senior White House official, who told JI that Dermer was most likely not on that specific phone call, said, “Jared was on a call and he did notice some hesitation on the prime minister’s side, which caused the president to not be sure if he should go forward with it.”

The source said that Kushner had been working hard to convince Trump to override the advice of intelligence officials that moving the embassy might spark violence in the region and press ahead with the move, which fulfilled a Trump campaign promise and was a technicality based on legislation passed by Congress in 1995 but not acted on by previous presidents.

“Ultimately, the president did decide to do it,” continued the former official, adding, “I understand why Ron would think any doubts about the prime minister supporting it were ridiculous because he knew Netanyahu to be a strong proponent of it.”

In reference to Netanyahu’s announcement that Israel would apply its sovereignty to 30 percent of the West Bank – land that Palestinians hope will one day become part of a national state – Kushner describes the incident in the chapters focusing on the Peace to Prosperity plan, which the Trump administration hoped would solve the decades-old intractable Israeli-Palestinian conflict.

During Netanyahu’s speech at the White House on Jan. 28, 2020, as the plan was first unveiled, Kushner recounts his own surprise as the Israeli prime minister congratulated Trump for being “the first world leader to recognize Israel’s sovereignty over areas in Judea and Samaria that are vital to our security and central to our heritage.”

“This was not what we had negotiated,” writes Kushner in the book. “Under our plan, we would eventually recognize Israel’s sovereignty over agreed-upon areas if Israel took steps to advance Palestinian statehood within the territory we outline. The two hinged on each other, and it would take time to flesh out the details.”

As Netanyahu spoke about immediately annexing the Jordan Valley, as well as portions of the West Bank, Kushner describes how “I grabbed my chair so intensely that my knuckles turned white.” He adds that he had been expecting to spend the afternoon “selling the peace plan through media” but was now “worried about damage control.”

Kushner lays the blame for the “misunderstanding” (the title of the following chapter) at the feet of U.S. Ambassador to Israel David Friedman, whom he says had “assured Bibi that he would get the White House to support annexation more immediately.”

Dermer told JI that the misunderstanding was likely connected to the timeline of Israel’s application of sovereignty over areas already designated in the plan to be under Israeli control and whether or not Netanyahu agreed to establish a Palestinian state in exchange for annexation.

“What Netanyahu had to agree to, specifically, was to negotiate on the basis of the Trump peace plan, which he said he was prepared to do,” said Dermer. “He agreed with a plan that would be a pathway to a Palestinian state, should they [the Palestinians] abide by what is in the plan and negotiate an actual peace with Israel.”

What a lot of people got wrong, Dermer continued, was agreeing not to touch areas designated for the Palestinians for a minimum of four years, but not the 30% of the territory that would become part of Israel under the plan.

He also said that a misunderstanding stemmed from the timeline. “I think that Jared may have believed that the decision was going to take several months before it was brought to the government, whereas in our view, and what was agreed, was that within days we were going to move ahead,” said Dermer, recognizing that there were still no detailed maps for the territory because those were still in the process of being finalized.

“What we were going to do was to pass a decision in principle on the 30%, subject to the mapping, and then go back to the government once there was a specific, detailed territorial plan,” he recalled. “It might have been that Jared believed the actual decision by the Israeli government would take place only when all of these maps were concluded, which could have been several weeks, if not several months.”

The former senior White House official told JI also that the misunderstanding — which is how Kushner characterizes the incident in his book — did indeed stem, in large part, from the timing.

“There is no question that the president was amenable and that we were pushing forward with annexation. The only question was about the timing of said annexation,” the former official told JI, confirming reports that there had been an exchange of letters between Trump and Netanyahu assuring White House support for annexation.

“The prime minister clearly believed that he was entitled to do it immediately,” said the official, noting that U.S. officials at the time could not see how it was possible for him to do so during an election campaign – Israel at the time was locked in a cycle of general elections – and believed that it would be more of a long-term process.

“In my personal opinion, however, this was the best thing to ever happen to the U.S.-Israel relationship, because it lit a tremendous fire that pushed us to find a way to rectify relationships [with the Arab world], which ultimately led to the Abraham Accords,” concluded the official.