The secret chords that sounded in the Sinai 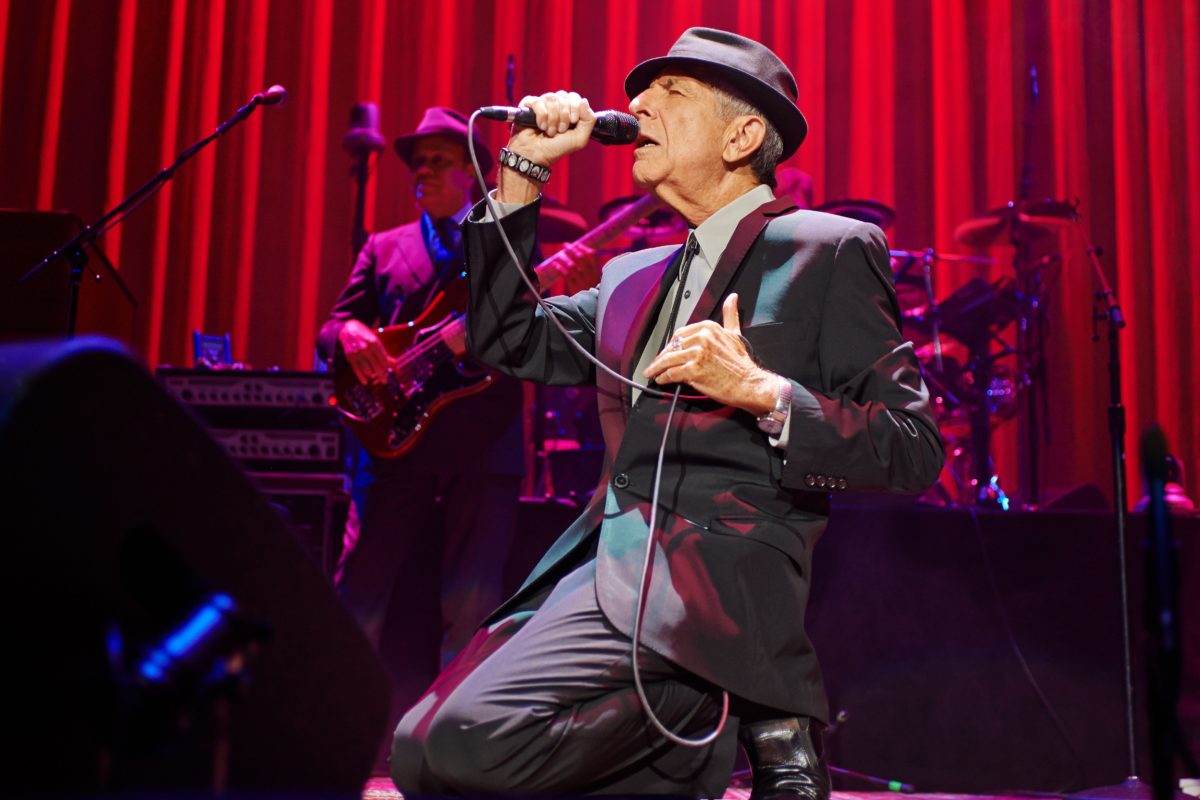 Leonard Cohen performs on stage at Leeds Arena on September 7, 2013, in Leeds, England.

It is difficult to think about a present that doesn’t include the melancholy, haunting music of Leonard Cohen, the dark and sultry edges of “Hallelujah,” the words of a young man grappling with his faith in “Lover, Lover, Lover.”

But that present almost didn’t exist. In October 1973, the 39-year-old singer-songwriter was living on a Greek island, mourning what he considered to be the end of his career.

And then the Yom Kippur War began.

Cohen hopped a boat to the mainland, and then a flight to Israel, where he found himself wandering in and out of Tel Aviv cafes before being recognized by like-minded musicians. Cohen was soon on the road, where he and the other wartime entertainers — most of them Israelis — traveled from army base to outpost to camp to raise the spirits of disheartened fighters on the brink of catastrophic loss. Less than a year later, he would release one of his most acclaimed albums.

“I think that, for him, our crisis here in Israel was, in some ways, a way out of his own personal crisis, which might have been a more pressing crisis for Leonard Cohen,” Matti Friedman, author of the new book Who By Fire: Leonard Cohen in the Sinai, told Jewish Insider in a recent interview.

The tour has become a historical event of its own, encapsulated within a much bigger historical event, and despite the myriad writings, films and documentation surrounding the war, little was recorded about Cohen’s tour through the desert. He is mentioned in passing in news articles from the time, and some who saw him perform have photographs, but no concert video exists.

Enter Friedman, the Israeli-Canadian writer and journalist, who has for years chronicled little-known events in modern Israeli history. His Pumpkinflowers reflects on his own experiences in the First Lebanon War; Spies of No Country spotlights the young Mizrahi men who undertook dangerous missions across the region to help secure Israel’s independence in the 1940s.

The former Associated Press reporter made aliyah in 1995, when he was 17, but grew up in Toronto. Cohen was from Montreal. “I grew up, of course, with Leonard Cohen playing in the background, a kind of childhood soundtrack,” Friedman said. “It’s really my parents’ music, but I just had ‘Sit Down,’ ‘Bird on the Wire,’ and those songs were always on. If you’re Canadian, and certainly if you’re a Canadian Jew, you don’t have a lot of cultural heroes. So Leonard Cohen looms very large.”

In 2008-09, Cohen staged a comeback tour to recoup some of the losses sustained after his manager — who later was sentenced to 18 months in prison for harassment — stole upwards of $5 million from the singer. The tour stopped in Tel Aviv.

An Israeli newspaper covering the concert mentioned Cohen’s 1973 tour through the Sinai, sparking Friedman’s interest in a story that was nearly lost to history.

“I understood that Israelis felt a deep personal connection to Cohen, that it was beyond this, ‘Look at this cool star coming from America.’ It really felt like they know him. In some ways they feel like he’s Israeli, which is very weird. It’s not true of all Jewish artists; they don’t feel that way about Bob Dylan, for example, or Paul Simon. They do feel that about Leonard Cohen, and it had something to do, I realized, with this shared experience that they had had with this guy.”

Friedman set off to learn more about Cohen’s Sinai tour, clipping news articles and eventually talking to soldiers who remembered catching — or just missing, as was the case with one exhausted medic who couldn’t summon the energy to chase the music he was hearing on the base — a performance. Interviews with once-young soldiers led Friedman to one person, and then another, and then another who caught a “show” — often no more than the musicians playing for a group of several dozen exhausted young Israelis.

Who By Fire — originally a line from the Yom Kippur liturgy “Unetanneh Tokef” and, millennia later, used as a song title on Cohen’s first album in the post-war years — is interspersed with entries from Cohen’s 45-page manuscript recollecting his trip as well as pocket diaries he kept during the tour. The singer’s estate gave Friedman permission to read and use Cohen’s journals. The entries, largely unedited, present an account of the singer’s travels through the Sinai

“It felt a bit weird, because I’m not sure what he’d think about people seeing, you know, behind the curtain, but I had the really incredible pleasure, for someone who loves Leonard Cohen, of looking through these notebooks, for example, and seeing drafts of his songs as they come out of his head,” said Friedman. “I saw the draft of ‘Who By Fire,’ [as it’s] being written down and the draft of ‘Lover Lover,’ literally the first time it is written on paper, and words are scratched out… ‘Chelsea Hotel [#2],’ there’s a few rough fragments of ‘Chelsea Hotel’ where he is still messing around with the words. So that’s an amazing thing.”

The diaries also contained, Friedman noted, Cohen’s “raw thoughts about this experience, before he had the opportunity to really polish them, or decide not to publish them, which is what ultimately happens. He writes a whole manuscript about the experience, which is a very strange and remarkable document that is written down really in the heat of the moment. He comes back from the war, sits down and writes this account of it, which is not the average account of a war. It’s not exactly a journal, but it feels very real, and very unfiltered.”

“It was quite amazing to sit with it and to be able to quote it,” Friedman added. “I just let Leonard Cohen speak to us about what this feels like.”

Who By Fire provides an unfiltered window into Cohen’s mindset and moments of self-awareness. At one point, he sees injured young soldiers being taken out of a helicopter and is overcome with emotion.

“Helicopter lands,” Cohen wrote. “In the great wind soldiers rush to unload it. It is filled with wounded men. I see their bandages and I stop myself from crying. These are young Jews dying.”

In the next sentences, Cohen faces reality: “Then someone tells me that these are Egyptian wounded. My relief amazes me. I hate this. I hate my relief. This cannot be forgiven. This is blood on your hands.”

The year after the Yom Kippur War, Cohen would release “New Skin for the Old Ceremony,” featuring “Lover, Lover, Lover.” The album relaunched his career and set him on a path to global celebrity.

“It’s got some of his best songs on it. He’s never going make it easy for us,” Friedman said. “He never says, ‘The war restored my faith in my music.’ He never says that. So we’re kind of guessing. But I think it’s quite clear that that’s what happened.”