Gov. Asa Hutchinson, who also teased a return to national politics, is in Israel for the Smart Mobility Summit in Tel Aviv and meetings with Israeli officials 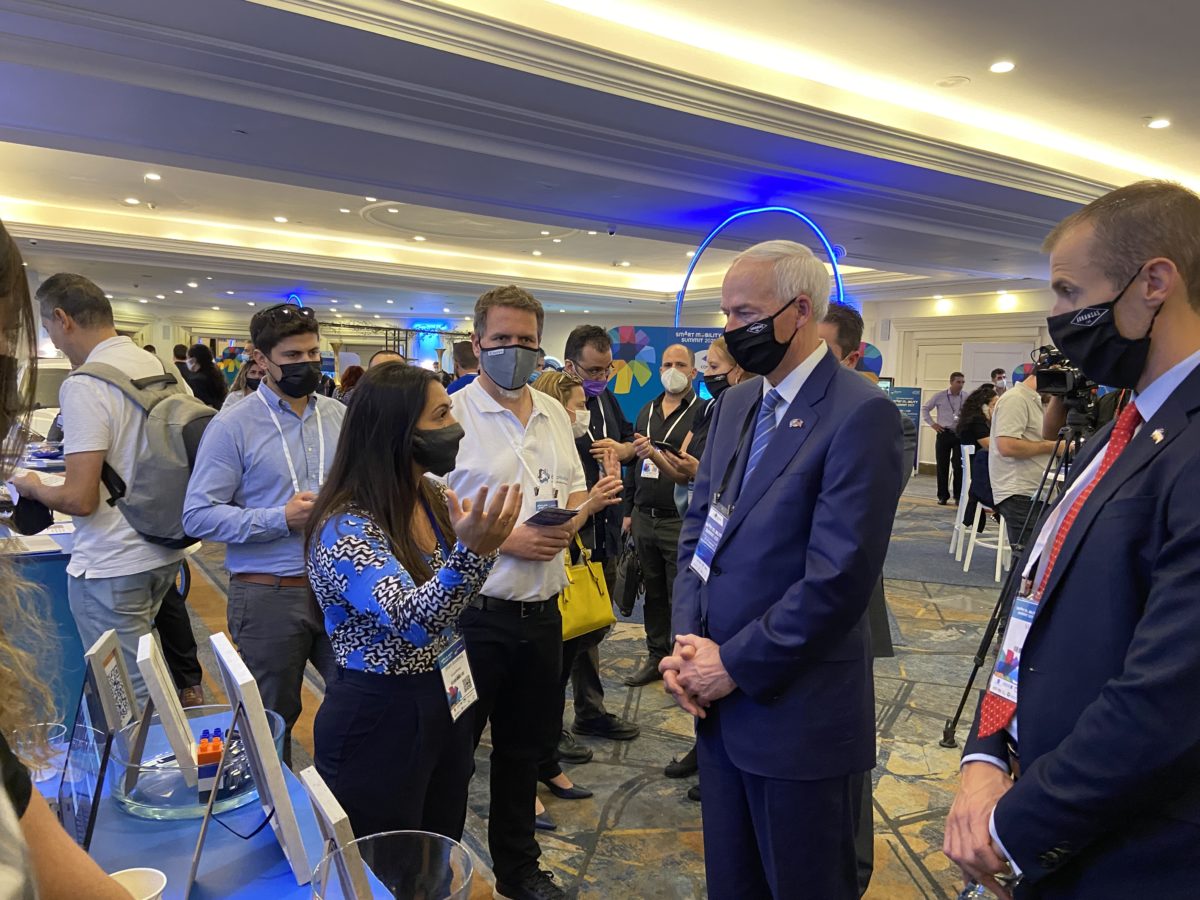 A day earlier, in Bentonville, Ark., home to the retail giant’s corporate headquarters, Walmart and Silicon Valley firm Gatik announced the successful pilot of autonomous, self-driving trucks — with no human on board — to ferry shipments from warehouses to its retail stores.

“Something I am concentrating on is smart mobility, from autonomous vehicles to drone deliveries, which Walmart is also engaged in, and Israel has startup companies in all of those areas,” the governor told Jewish Insider in an interview at the expo on Tuesday. “One of the things I am taking back with me is how Israel has become a leader in innovation and invests in new technologies that benefit the entire world. We must invest more.”

Hutchinson, who arrived in Israel Sunday and met with Prime Minister Naftali Bennett, President Isaac Herzog, Foreign Minister Yair Lapid and Transportation Minister Merav Michaeli during his stay, told JI that the focus of his trip was on strengthening partnerships and learning from Israel’s booming technology and innovation sector.

In his address at the conference, Hutchinson spoke about the Walmart-Gatik pilot, declaring it “the world’s first fully driverless delivery service.” He outlined how he cut through bureaucracy and changed legislation in his state to allow driverless vehicles to become a reality, addressing supply shortages and reshaping the future.

The governor then toured the summit’s exhibition hall, viewing the latest in autonomous vehicles, cybersecurity software for automobiles, sharp-vision road safety cameras and delivery drones. He listened to pitches and collected business cards.

Some 5,000 people from about 60 countries participated in the two-day event, which featured presentations from Bennett, Michaeli, Minister of Energy Karine Elharrar and Minister of Innovation, Science and Technology Orit Farkash Hacohen, as well as representatives of the traditional vehicle industry and the smart mobility world.

As the governor of a deep-red state with a sizable evangelical Christian population, Hutchinson is well attuned to the issue of Israel’s security. The state plays a key role in building Israel’s renowned Iron Dome missile-defense system.

Hutchinson, himself an evangelical who has visited Israel three times previously, said he believes that supporting Israel is “a fundamental part of American culture, history and of the ties that we have between Judaism and Christianity.”

“From a practical standpoint, Israel is our strongest ally in this region, a very dangerous part of the world and it is a friendship that helps keep America safe,” Hutchinson said, pointing to his state’s law that prohibits investment in companies that advocate a boycott of Israel, including Unilever, the parent company of ice cream maker Ben & Jerry’s, and its involvement in producing the Iron Dome.

“We’re in the supply chain,” he said of his state’s alliance with Raytheon Missiles and Defense, which last year partnered with Israel’s Rafael Advanced Defense Systems, to build Iron Dome batteries in East Camden, Ark.

“The prime minister said to me, ‘Make sure you tell the people in Arkansas how much we appreciate their support for our defense,’” Hutchinson said of his meeting with Bennett.

He said that several Israeli leaders also expressed concerns about the Biden administration’s plans to reopen the U.S. consulate in Jerusalem, which traditionally worked with the Palestinians but was shuttered by former President Donald Trump in 2019.

“It is understandable that this is being met with objections,” Hutchinson, a Republican who served in Congress from 1997-2003, added. “I, of course, appreciated President Trump’s decision to move the embassy to Jerusalem. That is the right pattern for the United States.”

Hutchinson, who is term-limited and will leave the governor’s mansion in 2023, told JI that he definitely plans “on being engaged in the national debate, on the direction of my party, as well as our country” after completing his second term.