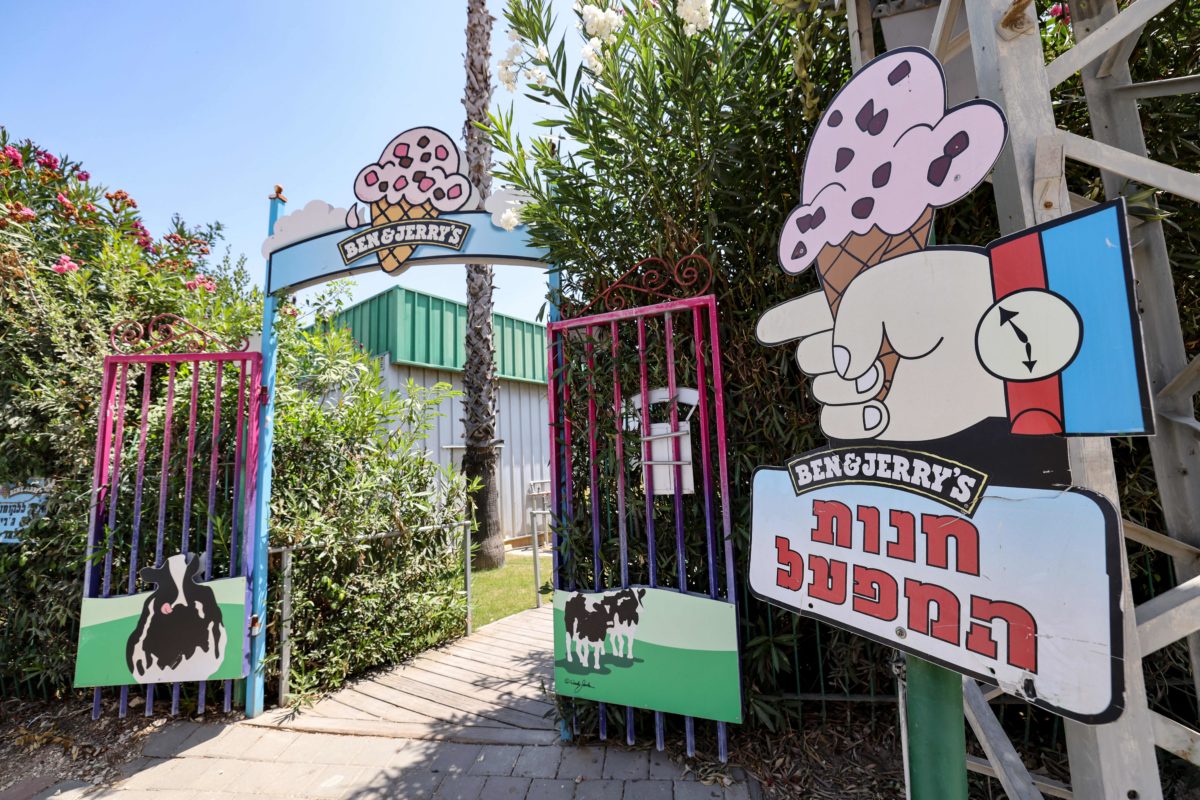 A view of the entrance of the ice-cream shop inside the Ben & Jerry's factory in Be'er Tuvia in southern Israel, on July 21, 2021.

At least four states with laws targeting the Boycott, Divestment and Sanctions movement are assessing whether the recent decision by Ben & Jerry’s and its parent company, Unilever, to cease selling the ice cream company’s products in the “Occupied Palestinian Territory” runs afoul of anti-BDS legislation enacted in recent years.

Officials in New York, Florida, Illinois and Texas are looking into whether Monday’s announcement forbids them from including the companies in their pension portfolios.

In Florida, New York and Texas, officials are also looking into whether the legislation forbids the states from signing contracts with Ben & Jerry’s and Unilever, the latter of which provides a broad range of food and cleaning products to state-run properties, including prisons, government offices and state universities.

The assessments come as American Jewish organizations mount a united effort to push states to implement the anti-BDS laws that have been adopted by 33 states since 2015. On Thursday, the Conference of Presidents of Major American Jewish Organizations sent a letter cosigned by a number of national groups to the 11 governors whose states have passed laws addressing pension portfolios. Jewish Community Relations Councils, local federations, Christians United for Israel, American Jewish Committee, StandWithUs, B’nai B’rith and Hadassah were all part of the effort to reach out to governors, Conference of Presidents CEO William Daroff told JI.

Jake Adler, director of Jewish affairs for New York Gov. Andrew Cuomo, told Jewish Insider that “New York State is currently doing a legal review” to assess what, if any, measures need to be taken in response to the 2016 executive order signed by the governor that called on the state to divest public funds that support the BDS movement.

“The governor takes all of this very seriously, which is why he signed that executive order back in 2016,” an individual with knowledge of the review said. “He takes the whole thing seriously.”

In Illinois, an individual familiar with state boycott efforts confirmed to JI that “Illinois’ board has begun its process to investigate Unilever,” referring to the independent state body, the Illinois Investment Policy Board, that determines whether companies run afoul of its boycott laws.

In Texas, Comptroller Glenn Hegar announced Thursday that his office will review state law to determine if Ben & Jerry’s or Unilever had taken “specific action” that would violate Chapter 808 of the Texas Government Code, which was enacted in 2017 to address companies that boycott Israel. The law defines a boycott as “intended to penalize, inflict economic harm on, or limit commercial relations specifically with Israel, or with a person or entity doing business in Israel or in an Israeli-controlled territory.”

Each state has its own process by which to determine whether a company has violated state laws regarding BDS. Some states, like Illinois, have an independent board to determine which companies are in violation of the state’s laws regarding boycotts of Israel, as well as other state laws involving Sudan and Iran. The board lists more than three dozen companies that are prohibited from state investment, though a handful are, according to the board, in talks with the IIPB on the issue.

Daroff noted that he spoke to corporate executives at Unilever on Tuesday about the potential fallout from the decision to pull Ben & Jerry’s products. “It was very positive,” he said of the meeting. “They were very much trying to assure us that it wasn’t Unilever [that made the decision], that it was this board at Ben & Jerry’s, and they were somewhat apologetic but also mostly in listening mode.”

Unilever may be able to override the decision by the Ben & Jerry’s board, according to a proxy statement filed with the Securities and Exchange Commission at the time of the corporation’s acquisition of the ice cream company in 2000.

Citing the license agreement, the statement said that “Unilever has agreed to undertake activities related to the ‘social mission’ of the Company in connection with the Unilever Affiliates’ activities under the Ben & Jerry’s trademark” and lists a number of activities, including commitments to purchasing fair-trade products and using unbleached paper products, that could fall under that agreement.

If Unilever is in breach of the agreement, according to the filing it must pay an 8% royalty to Ben & Jerry’s, a 3% increase from the percentage agreed upon by both parties.

That clause, Daroff said, provides an out for the parent company. “This seems to me to be a way for Unilever to pull off the Band-aid, and do away with this obviously, radically extreme Ben & Jerry’s board,” he said.

A number of anti-BDS laws have faced court challenges, with some found to be constitutional, but to date no piece of legislation focused on pensions has been successfully challenged.