NYTimes reporter bowled over by Judaism

Roving journalist Nellie Bowles details her ongoing conversion to the Jewish faith in a newsletter, ‘Chosen by Choice’ 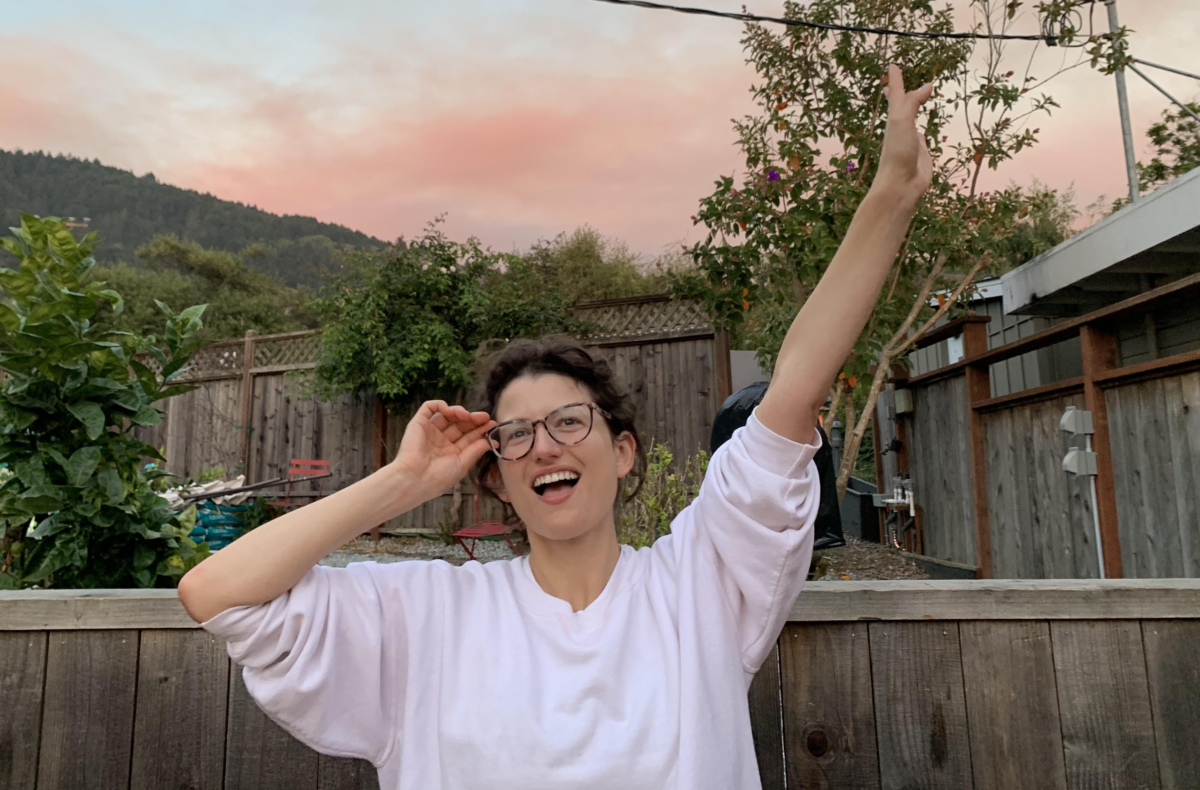 As a roving tech and culture correspondent for The New York Times, Nellie Bowles has earned a reputation as a witty and gimlet-eyed observer of the strange trends, mores and personalities cropping up in Silicon Valley and beyond. Since 2017, when she joined the paper, Bowles has trained her caustic pen on such bizarre phenomena as dopamine fasting, divinity consultants and millennials who live with nuns. In perhaps her most memorable profile, the Canadian self-help guru Jordan Peterson claimed that witches “certainly exist” and live in swamps.

Despite her japing approach, Bowles, 32, often demonstrates a deeper truth about how the human search for meaning and purpose can, at times, manifest in bizarre and quasi-religious displays that border on the messianic. In her private life, Bowles, who lives in Los Angeles, is embarking on her own religious quest — albeit one that is notably more timeless than the curious spiritual fads she has covered in her day job: converting to Judaism.

Ever the reporter, Bowles, who grew up in the Greek Orthodox church, has been documenting her journey in a charming newsletter, “Chosen by Choice,” launched in late December. The immediate inspiration for Bowles’s conversion is her partner, the journalist Bari Weiss, who is Jewish. But converting, Bowles makes clear, has by no means been a perfunctory endeavor. In her weekly dispatches, she reveals how the process of becoming Jewish has in many ways changed her approach to life and work.

“This is going to sound strange, but it’s made me much more confident,” Bowles told Jewish Insider in a recent interview. “Before this, my religion was my work. I lived for it. I worshiped it. Now, I see work as separate from my soul. And that allows me to be stronger and braver at work, less anxious about pleasing everyone all the time. Because my soul is safe. My center is working on something else.”

Bowles is such a big fan of Judaism that she wants others to try it too. In the following email exchange, she discussed her preference for Mizrahi food, her struggle to memorize Hebrew prayers and her strongly held — though controversial — belief that Jews should evangelize.

The interview has been lightly edited for clarity.

Jewish Insider: When did you decide to convert and how much longer do you have until the process is complete?

Nellie Bowles: I decided to convert a little over two years ago. I took a 101 course and joined a Jewish community, met for months one-on-one with my rabbi, Noa Kushner, and have finished most of the challenges laid out for me. Which is to say, I could “complete” the process this month if I wanted. My reasons for dragging it out: I want to learn more. I want to challenge myself more. I took my courses at a progressive shul, and I want to explore and learn now from a more Conservative or even Modern Orthodox lens. I don’t think the process will ever be complete, really. I think I’ll always be deepening my knowledge and becoming more Jewish. But for sure at some point I’ll dunk in a mikvah.

JI: At least anecdotally, it seems as if converts often become even more punctilious about religious details than those who are simply Jewish by birth. Do you think that’s the case, and if so, does it apply to your relationship?

Bowles: Absolutely. 100%. I am the Shabbat enforcer. You give me rules and I’m going to follow them!

JI: You’ve mentioned that you’ve had trouble with memorizing some of the prayers. How’s that going?

Bowles: They’re going OK, but I rely on the bencher a lot still. I want to spend a month or two soon just focusing on prayer memorization — the newsletter will be boring those weeks, but memorization is a really good skill and an important thing that our educational system ignores now (memorizing is not trendy so much as critical thinking). But memorizing is a way of internalizing and bending oneself around text. The poems I know by heart are part of me in a different, richer way than the ones I was told to read quickly and write an essay analyzing.

JI: You say in your inaugural entry that “Mizrahi and Sephardic food is simply much better than Ashkenazi food.” You’re not an enthusiast of brisket, chicken liver and gefilte fish?

Bowles: At the risk of getting myself in too much trouble here, I am just in a state of near constant shock about Ashkenazi food. You guys. You guys. Israeli food is an incredible treasure. A delicious and healthy cuisine. It’s time to bring over that cultural heritage — the spices! the tahini!

JI: Are you keeping kosher, and if so, do you plan to keep kosher after your conversion is over?

Bowles: This has been really tricky. I already never eat pork (pigs are deeply intelligent — smart as a dog, basically smart as a toddler). Meat in general is easy to do away with, so a vegetarian home is a good shortcut to kosher. But shellfish is a really hard one to give up. I’m from San Francisco, and I love clam chowder. I love oysters. We’re thinking maybe we just keep a vegetarian home? It’s an ongoing conversation right now.

JI: How does your family feel about your conversion?

Bowles: My mom is quite devout, goes to church a couple times a week, etc., so I think for her it was surprising at first, or maybe just a little awkward. My mom is so kind and loving, she would never say that, so I’m really projecting here.

We’ve done Shabbats now with my parents and with my extended family, and they see what it is and see how much Judaism is bringing into my life. And they love it. My mom texts me “Shabbat shalom!” I started the blog in large part to share with my family more of the things I was thinking and feeling. And I get lots of wonderful notes from them about it.

JI: These questions are arriving in your inbox the day after Shabbat. Any new insights or revelations to share after your day of rest?

Bowles: My big observation: People get annoyed when you don’t text back for a day! There’s a sense now that one should be constantly available — to friends, colleagues, landlords. And to not text back for 25 hours is like crazy. That was what Saturday night made me realize this week.

JI: You say in the newsletter that you’d like to write a book about conversion, perhaps with Bari. Can you describe what that might entail?

Bowles: Your guess is as good as mine. But I read and loved Anita Diamant’s oeuvre on conversion and living a Jewish life. I could see trying to add to that conversation. We both really feel that a Jewish life should be made more accessible to people who want in.

JI: In your latest entry, you mention that a planned trip to Israel was canceled because of the pandemic. Do you think you’ll visit when it’s safe to do so? And, more to the point, do you feel as if your identification with Judaism is tied up at all with any sort of identification with or connection to Israel?

Bowles: YES! I cannot wait. As I mentioned: the food. I plan to eat a lot there.

Now in terms of identifying with the land and feeling connected to Israel — I think it’s too soon to expect myself to understand that dynamic. I don’t yet feel particularly connected to Israel, and I know that going there and learning more is a huge part of my conversion that I’m excited for.

But, and I’m going to write about this on the blog: the anti-Zionism and hatred I’ve felt from people (some even who I know very well) for not immediately disavowing Israel as a place or an idea has been shocking.

Now, to caveat, I travel in extremely left-wing circles, since I was born in San Francisco and now work in media.

In many parts of these worlds, to not immediately say Israel as a Jewish state ought to be disbanded… or to disagree that the very existence of that nation is the number-one violence being perpetrated on the world, far worse than the existence of America… well, I’d be lying if I said I hadn’t already had conflict in my social world over this point.

I’m going to write a lot more about all that one day. But first I gotta go there!

JI: Do you have any connection with Jewish values like tikkun olam and social justice?

Bowles: I very much connect with that. In the conversations around social justice now, people talk a lot of talk. Being performatively progressive has never been easier! What I love about the idea of tikkun olam is that it is about repairing. Repairing is not posting a meme. It’s not an ideology that sounds beautiful but might or might not result in suffering. It’s actual, tangible work of making the flesh-and-blood world better for the people in it. At least that’s how I see it. And it can be seen in broad political ways, but because of my work I can’t engage with activism, so I focus on the ways tikkun olam might feature in my little life. So: I have a dumb habit tracker journal and one of the boxes I have to fill in every day now is “did good thing for someone.”

JI: You’re currently collecting conversion stories for a Tablet piece. How’s that going so far — anything of note you’re at liberty to share?

Bowles: I’ve gotten wonderful, wonderful notes from converts. People don’t often hear Jewish converts’ stories, and I think there’s a lot of desire from my cohort to share. And people should send me more!

JI: Your entry on Holocaust jokes — and how feeling comfortable with them is relevant to conversion — was slightly reminiscent of the Seinfeld episode in which Jerry resentfully suspects that his dentist, Tim Whatley, is converting to Judaism simply for the jokes. Not to suggest that you’re converting for the jokes! But are you familiar with the episode? And are there any ways in which you’re engaging with Jewish culture — both past and present — in an effort to better understand what “being Jewish” might mean?

Bowles: LOLOL. Yes. I’ve now seen the episode, and it’s brilliant. And of course I’m diving into Jewish cultural traditions — I’ve found that the best way to do that is by falling in love with a Jewish woman and spending time with her family.

JI: Another related question: You write that “becoming Jewish is a cultural transition. It can’t be taught so much as lived.” Have you gotten to a point at which you feel entitled to any sort of cultural ownership over Judaism?

Bowles: I have definitely gotten to the point where I feel I am more Jewish than not. If someone asks me if I’m Jewish, I say yes proudly! But I feel no sense of cultural ownership, if what is meant by that is exclusivity.

JI: You argue that “Jews need to evangelize.” That would seem to be a radical view! Care to elaborate?

Bowles: It is radical, but it shouldn’t be. The vast majority of non-Orthodox Jews who do marry, marry non-Jews. Unless people are comfortable with Reform Judaism disappearing after a generation or two, then I would start with converting the spouses!

And also: Why not convert people? Judaism is wonderful. Living a Jewish life is a good life. The world would be better if more people lived more Jewishly. So I’m all for evangelizing.