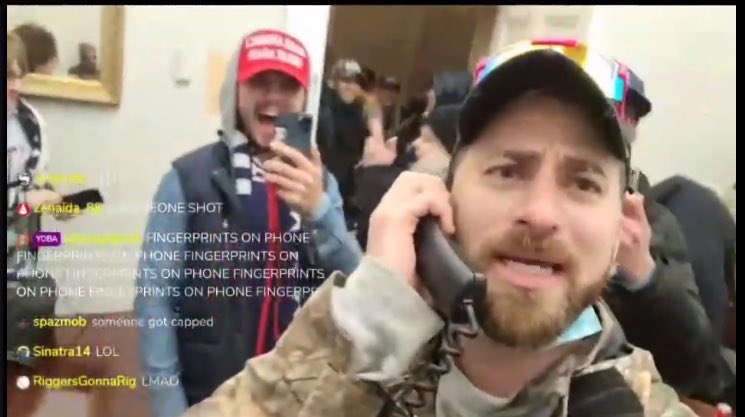 Anthime Gionet, also-known-as Baked Alaska, during a livestream from inside the Capitol.

I can’t say I was surprised to spot Anthime Gionet — the white nationalist internet troll and failed rapper better known by his online alias, Baked Alaska — among the horde of rioters who stormed the Capitol last week as Congress met to certify the Electoral College vote. Like so many of his alt-right associates, Gionet, 33, came to prominence during the 2016 presidential election for his role in organizing a series of pro-Trump flash mobs that he giddily livestreamed from his Periscope account, gaining a sizable fan base.

So, when Gionet filmed himself breaking into a senator’s office on Wednesday afternoon — all the while raking in digital tips from his thousands of followers — I imagined that he felt right at home. The gravity of his actions did not seem to weigh on him as he pantomimed a fake call about overturning the election results from a desktop telephone.

Still, I found myself doing something of a double take. Gionet — the subject of a thought-provoking new column by New York Times media scribe Ben Smith — had virtually disappeared from public view after he was banned from YouTube last year and Twitter three years before that, losing two of the loudest megaphones in his social media arsenal. I imagined that Gionet must have felt some perverse sense of gratification that he had managed to go viral once again as he made his way into the Capitol — even if he had put himself in legal jeopardy to do so.

When I met and interviewed him nearly four years ago in Los Angeles, while on assignment for a New York Times Magazine story about a former fashion photographer out to cast the figureheads of the radical right as heroes rather than pariahs, Gionet seemed to think of himself as a brave truth-teller testing the limits of free expression.

He was about to self-publish a book, Meme Magic, detailing his self-proclaimed mastery of digital persuasion (it was later removed from Amazon because of a copyright violation). He often referred to himself in the third person, and boasted of his 145,000 Twitter followers. He seemed addled and completely self-absorbed as he clutched his smartphone — no doubt his most valued possession — with an energy I recall as unnervingly twitchy.

“Every 12 hours now, there’s a new article about me,” Gionet told me in February 2017, sitting in front of a vanity mirror at a Culver City studio before participating in one of the strangest photo shoots I have witnessed. His bleach-blonde mullet was jarring to behold under the fluorescent lighting. “I’m on heavy rotation. They have someone at every news organization that’s just like, ‘Watch Baked Alaska’s Twitter account. Whenever he tweets, write a story about it.’”

He was overstating his infamy. Though Gionet had earned some press attention during a time in which mainstream media organizations were still sussing out the alt-right as a social phenomenon, he was more well-known within the loose-knit cohort of online reactionaries who emerged from the bowels of the internet during Trump’s first campaign. But even among such miscreants, Gionet — who squirmed his way into right-wing circles as a tour manager for Milo Yiannopoulos — was then finding himself persona non grata thanks to a recent series of antisemitic tweets including one in which he declared that “Jews control the news.”

For his indiscretion, Gionet was banned from the Deploraball, the alt-right celebration held on the eve of Trump’s inauguration at a moment when the president’s most extreme supporters were convinced that they had helped install their man in the White House. Keeping him there, by whatever means necessary, would come later.

I didn’t tell Gionet I was Jewish when we spoke at length in the Culver City dressing room. It wasn’t that I found him particularly menacing. To the contrary, he seemed rather desperate for approval, and I got the sense that if I had mentioned his past comments he would have claimed that they were taken out of context and that he held no ill will toward the Jewish people. I wasn’t in the mood for such guile. At any rate, his antisemitism would soon enough present itself even as he tried to mask it with sarcasm.

Later in the day, Gionet was expressing his distaste for the American Civil Liberties Union, arguing that the organization was no friend to the right. I objected, so he asked me defiantly if I could name an instance in which the ACLU stood up for free speech. Knowing my audience, I made reference to one cause I was certain he could get behind: that the civil rights group had defended the Nazis of Skokie, Ill., in the late 1970s.

Gionet seemed taken aback. “They defended the Nazis?” he said with apparent awe. “Really? Huh. I did not know that. That’s a good fact. I love the ACLU! Wow.”

Gionet was born and raised in Anchorage, though perhaps more intriguingly, he spent a year and a half of his adolescence, he said, in Petropavlovsk-Kamchatsky, a city in eastern Russia. His parents, missionaries who deliver medical supplies to orphanages, moved there temporarily in the early 2000s.

“It was pretty intense,” Gionet recalled. “The main thing that was different is there’s not really a rule of law there, and I think that’s maybe where I get some of my chaotic nature, I guess. You could just, like, burn a fire in the middle of the street, and nobody would care. It wasn’t really — cops didn’t do anything.”

Later, Gionet moved to California, got his bachelor’s degree in marketing from Azusa Pacific University and worked briefly at BuzzFeed’s entertainment division in Los Angeles — a job at which he claims to have been singled out for his pro-Trump political views, though this account has been disputed. “All this social justice-type stuff started rising up,” Gionet said. He left BuzzFeed in 2016, suggesting that he was alienated by an increasingly censorious culture that he believed was out to muzzle the right.

“Some of the greatest content that’s coming out is from Trump supporters,” Gionet said while discussing social media bans by such sites as Twitter. “And the fact that they’re openly censoring them and favoring the other side is absolutely ridiculous, especially from a business perspective. It’s like, you should want as many users as possible doing their thing as long as they’re not being violent.”

It feels quaint now to think back on that moment — before the “Unite the Right” rally in Charlottesville, before the Capitol breach in which five people died — and wonder if Gionet had any idea what he was getting himself into. I won’t pretend that I have any special insight into his motivations, and I suspect that Smith was onto something when he speculated, in his most recent Times column, that Gionet is the product of a troubling digital culture in which social media incentivizes bad actors to become ever more extreme as they seek validation from their followers.

“And so Mr. Gionet’s story isn’t quite the familiar one of a lonely young man in his bedroom falling down a rabbit hole of videos that poison his worldview,” writes Smith, previously the editor in chief of BuzzFeed News. “It’s the story of a man being rewarded for being a violent white nationalist, and getting the attention and affirmation that he’s apparently desperate for.”

At the photo shoot, Gionet cycled through a number of strange props, one of which included a black pitchfork affixed with a laser sight that he was told he could use to go after crooked politicians.

“That is so legit!” Gionet said. “Soros?” Posing with the makeshift weapon, Gionet then adopted a more defiant tone: “Revolution!” he yelled.

Back then, his rallying cry seemed like a bad joke. In retrospect, it feels more like a warning.