'The real test will be moving beyond Hanukkah,' said David Zilenziger of Pastrami Queen 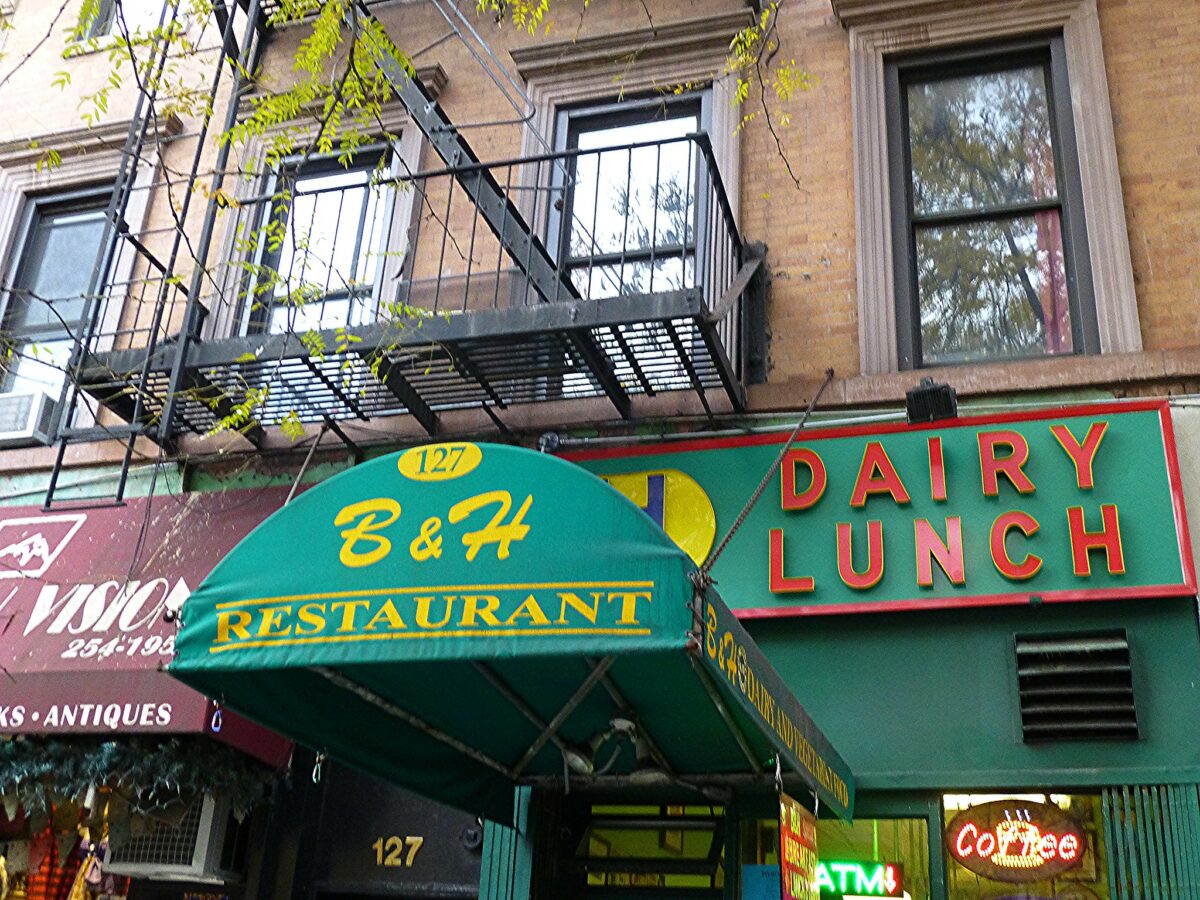 B&H Dairy in the East Village.

As indoor dining in New York City came to an end on Monday, Jewish food establishments were bracing for a long, hard winter, even with the prospect of widespread COVID-19 vaccination on the horizon.

The ban, ordered by New York Gov. Andrew Cuomo, restricts customers from eating inside for at least two weeks as coronavirus cases and hospitalizations in the city continue to rise — a period reminiscent of the first wave of the pandemic in the spring, when Cuomo limited restaurants to takeout and delivery as new COVID cases skyrocketed.

With the onset of the colder months — and the imminent possibility of a snowy winter season — eateries have increasingly come to rely on seating their customers indoors at the mandated 25% capacity, a reprieve granted in September after a June order allowing outdoor dining.

“Dining in helps a lot,” Henry Sinchi, a manager at Kasbah Grill, a kosher restaurant on Manhattan’s Upper West Side, told Jewish Insider in a brief phone conversation on Monday evening. “Now we have no people here today. It’s empty, and outside it’s too cold. It’s not enough.”

“I feel deeply disappointed,” said Dean Jankelowitz, co-owner of Jack’s Wife Freda, a South African-Israeli bistro with locations in SoHo, Chelsea and the West Village, adding that he was caught off-guard by Cuomo’s announcement on Friday. “Taking away the indoor dining really sucks out the energy of the space entirely, and then relying on outdoor dining in this season — it’s hard for the staff, it’s hard for the customers and the community.”

“It’s going to be a lot more difficult as the weather turns and the days get darker,” Jankelowitz added. “God help us.”

Noah Bernamoff, a restaurateur in New York who is affiliated with Black Seed Bagels, Celestine and Grand Army, sounded a similar note of frustration in a text exchange with JI, arguing that he was not opposed to shutting down indoor dining but that he believed the government’s approach to the pandemic has failed to prioritize service workers even as they have put themselves at risk in order to work amid the pandemic.

“I’m completely in favor of austere policies that protect public health and safety,” he told JI, “but we can’t ignore the reality that certain business categories and employee sectors have paid the highest cost throughout this pandemic, economically and medically, with ostensibly zero guidance, zero advance communication and federal stimulus debt that couldn’t be more poorly designed for our industry and the circumstances at hand.”

Melissa Jones, the bookkeeper at Sarge’s Delicatessen and Diner in Murray Hill, echoed that view. “The employees that are getting really screwed don’t have a lot of options in the restaurant business,” she said, noting that because of the indoor dining ban, Sarge’s has had to lay off two busboys and four waitresses.

It isn’t all doom and gloom, however. Though Sarge’s has lost most of its daytime deliveries because its lunchtime clientele largely included office workers who are now confined to their homes, business has picked up a bit lately.

“Hanukkah has been unusually busy,” said Jones, adding that service seemed to be busier than last year during the same time. “Thank God for the holidays.”

“The real test will be moving beyond Hanukkah,” said David Zilenziger, who manages Pastrami Queen’s two locations on the East and West Side.

Pastrami Queen’s West 72nd Street spot, which opened last week, replaced the kosher restaurant Fine & Schapiro. According to Zilenziger, business has been going well because, he posits, cooped-up New Yorkers take comfort in ordering Jewish delicacies like brisket, corned beef and matzoh ball soup during trying times, much for the same reason they appear to have relied on pizza joints and liquor stores throughout the pandemic.

“I think it works in the best and worst of times,” Zilenziger told JI.

Still, as the pandemic takes its toll, restaurants in New York have been fighting for their lives.

Since the pandemic hit, at least two Jewish delis in the city have closed permanently, including Jay and Lloyd’s in Sheepshead Bay and Pastrami Masters in East Williamsburg. Ben’s Kosher Deli in Manhattan is “temporarily closed until such time COVID-19 is tamed” or “a vaccine is made available,” according to a voice recording.

For many restaurants, the suspension of indoor dining is a major setback — one they may not all overcome.

“We are a tiny restaurant,” Fawzy Abdelwahed, co-owner of B&H Dairy in the East Village, told JI. “We can only put three tables out in front, and have only two safely spaced tables inside. We don’t have the big outdoor spaces like other restaurants. We fear we will not survive the pandemic at this rate. We need every table. If restaurants are being asked to stop indoor dining, then give us something in return. Help us!”