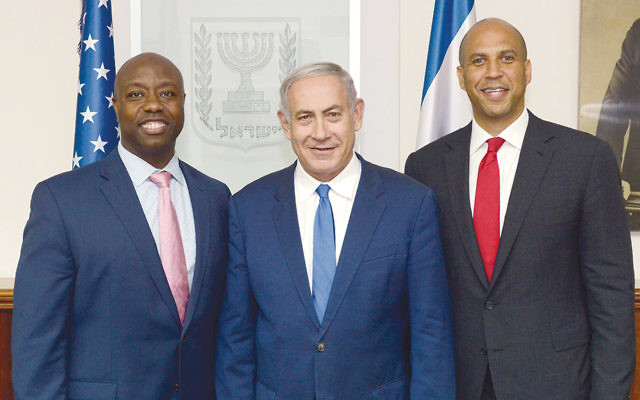 Sen. Cory Booker (D-NJ) expressed his support for Israel’s right to defend itself, blasting Hamas as a terrorist organization that is hurting the Palestinian people on Monday. The New Jersey senator was reacting to the latest round of violence between Israel and Hamas in Gaza in an interview with CBSN Live.

“We support Israel’s right to defend itself, full stop,” Booker said. “You have a terrorist organization that actually suppresses its own people, conducts acts of violence and human rights violations against people who live in Gaza. And so Israel has a right to defend itself and it should do that. But for the people that live in Gaza, this is not about them. It’s about the terrorist organization that is attracting such violence, that is using children hospitals and schools as shields for their insidious aims, which is the destruction of the state of Israel.”

At the same time, Booker, a 2020 presidential candidate, said that the U.S. should also be mindful “of the defense and the self determination of the Palestinian people.”

“That terrorist organization is like a cancer undermining the security of both Gazans as well as Israelis,” Booker said about Hamas. “And so I support the defense of the state of Israel, but I also support the human rights and self determination of the Palestinian people. I don’t think there’s any conflict there. I think we need to continue to work for peace in that region and work towards a two state solution.”

President Trump said on Sunday that the administration supports Israel “100 percent in its defense of its citizens.”

Booker contended that “there was no empathy for the struggles of Palestinians in that region” in the president’s statement, further criticizing the administration’s handling of the Palestinian issue.

“One thing that people should know,” he stressed, “from before Donald Trump, from before I was a senator, I stand with the right of the state of Israel to exist and to defend itself, and I will always be one of those people that stands up for the human rights of all people.”