Michigan redistricting sets up close races across the state 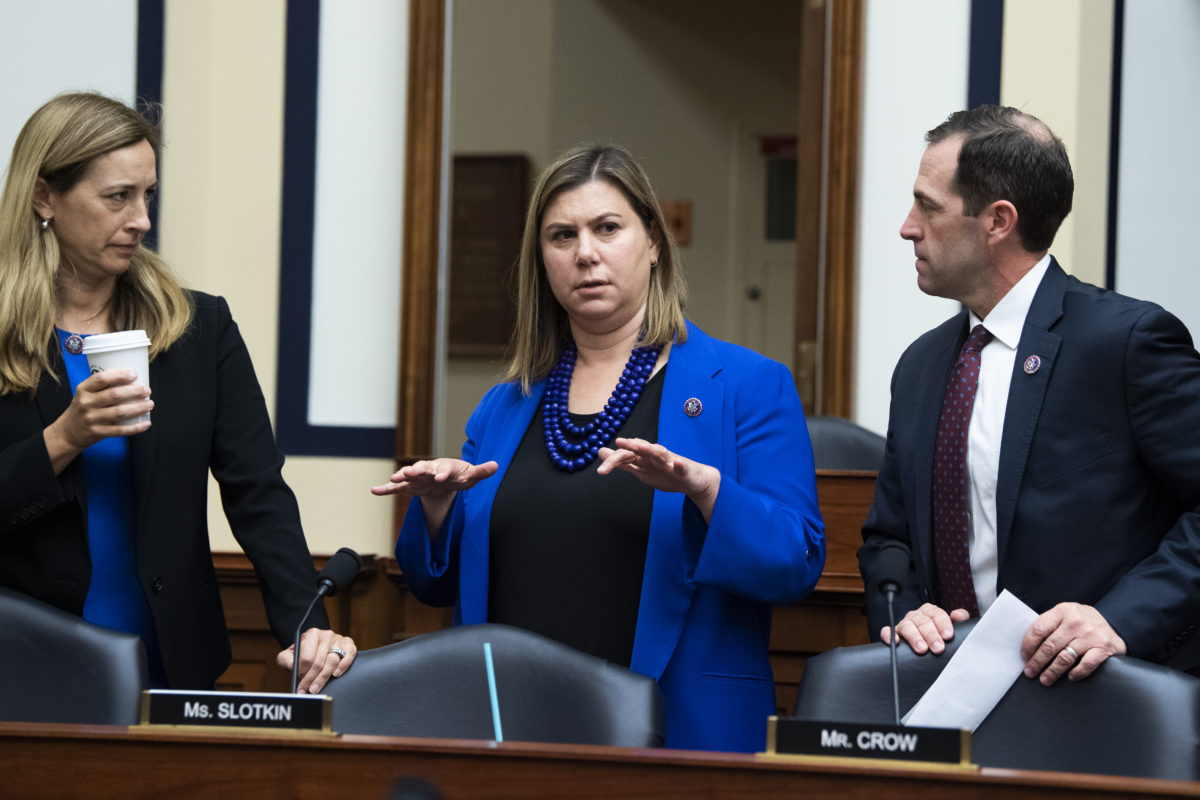 Michigan’s loss of a congressional seat in this year’s redistricting process has scrambled district lines across the state, promising hotly contested primary races among Democrats in the Detroit area and a range of other close races across the state.

Reps. Elissa Slotkin (D-MI) and Peter Meijer (R-MI), who each won swing districts in 2020, are set for another round of tight races in their new districts. In the southwest corner of the state, Michiganders are waiting to find out if they’ll see a member-on-member primary between Reps. Fred Upton (R-MI) and Bill Huizenga (R-MI). And elsewhere in the state, Rep. Dan Kildee (D-MI) faces strong Republican headwinds.

Slotkin’s new district, the 7th, shifts further west away from Detroit and includes more rural areas than her previous one, but includes more of the Lansing area, which leans towards the Democrats. Strategists who spoke to JI said she’s still favored to win, despite unfavorable electoral conditions for Democrats in the midterms. The nonpartisan Cook Political Report rates the race as a toss-up.

“[Slotkin] was made for that district,” longtime Michigan strategist Ed Sarpolus told JI, citing her previous victories in a conservative-leaning district and her background as a Defense Department and CIA official. “She understands things a lot differently than the average candidate does… Slotkin is somebody I would say was prepared to take on that challenge.” 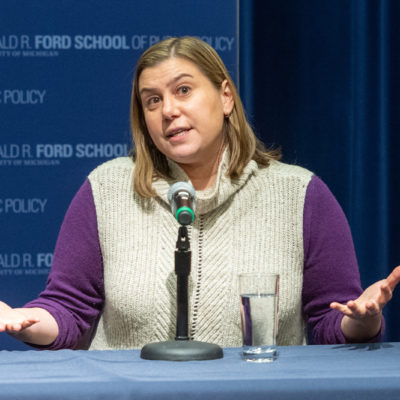 Political strategist Adrian Hemond noted that state Sen. Tom Barrett, a Republican who is running in Slotkin’s new district and is a former client of Hemond’s firm, will have to “consolidate support from all of those rural areas and to be able to capture enough independents,” given that Slotkin is likely to dominate in Lansing and the more suburban parts of the district.

Corwin Smidt, who chairs the political science department at Michigan State University, was more skeptical of Republicans’ chances to unseat Slotkin, arguing that they have yet to consolidate around one challenger.

Slotkin, who is Jewish, took to Twitter last year to lambast colleagues’ objections to supplemental funding for Israel’s Iron Dome missile-defense system as “devoid of substance and irresponsible” and driven by a “desire to attack something — anything — related to the State of Israel”; she was part of a group that pushed House leadership for a quick stand-alone vote on the funding.

She was endorsed by both J Street and the Jewish Democratic Council of America in 2020.

Slotkin has also established herself as a crusader against domestic terrorism in her new role as the chair of the Homeland Security Committee’s Intelligence and Counterterrorism Subcommittee during her second term in Congress.

Further west, Meijer’s district, Michigan’s 3rd, is more compact than his previous one, centering around Grand Rapids and pulling in more of the city’s outskirts. While the new district leans slightly to the left — unlike his previous district, which had a GOP advantage — Meijer, who voted to impeach former President Donald Trump last year, is also seen as the current favorite, if he can survive the GOP primary. Trump endorsed his primary opponent John Gibbs in November. Cook rates Meijer’s general election race as a toss-up.

In the general election, Sarpolus described the new district as “the best” possible outcome for Meijer.

“He can win a Democratic district because of who he is,” Sarpolus said. “Because the district becomes more moderate — and the other thing is it could be easier because there will be fewer Republicans, fewer conservatives in this district, Meijer can play to his moderate base.”

Meijer, the scion of an eponymous grocery store chain, also has strong name recognition in the region because of his family’s business, Hemond noted. Democrats, according to Smidt, are likely to rely heavily on mobilizing minority voters in Grand Rapids and Muskegon to have a shot at unseating Meijer if he survives his primary. 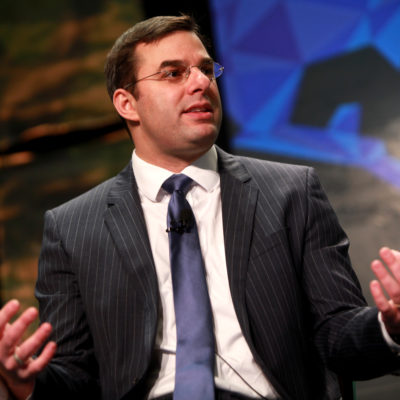 The race to succeed Rep. Justin Amash heats up

Hemond, who was less bullish about Meijer’s chances in both the primary and general elections, said that if Democrats “get the right candidate, they could back-foot him,” but that “the fact that it’s a midterm election and that he does cut a pretty moderate profile probably squeaks him through.”

Rabbi Asher Lopatin, who leads the joint Detroit-area Jewish Community Relations Council/American Jewish Committee organization, said that the Jewish community has a “very good relationship” with Meijer and that “he’s been very responsive,” including joining Zoom calls and programs with the Jewish community.

He noted, however, that the Western Michigan Jewish community “is not monolithic” and that Jewish Republicans in the area “might be divided between different Republican candidates.” Overall, he said, the area’s Jewish community is more evenly divided among conservatives and liberals than the predominantly liberal Detroit-area Jewish community.

In the southwest corner of the Wolverine State, Reps. Fred Upton (R-MI) and Bill Huizenga (R-MI) may face off in the new 4th District, which is largely made up of territory currently represented by Upton, who has not yet announced if he will seek reelection.

Upton, who has been in Congress since 1987 and chaired the House Energy and Commerce Committee when House Republicans last held the majority, has been ostracized by some in the party for his vote to impeach Trump.

Upton’s decision will likely come down to his estimation of his current place within the party. “If he does stay and run, if he wins, will he have a committee chairmanship or a position in leadership? Or because he’s so far more moderate, [will he] basically be a backbencher? And he may not like that,” Sarpolus said.

Michael Traugott, a political scientist at the University of Michigan’s Center for Political Studies, said that the “increasingly hostile environment” in Congress to bipartisanship and compromise, which Upton has prioritized during his career, is also likely playing into his decision-making.

Given that Upton currently represents most of the new district, has served in Congress for decades longer than Huizenga and has traditionally been a strong fundraiser, Hemond sees him as having an advantage if he throws his hat into the race.

In the eastern part of the state, Kildee’s new district centers around Flint, as his previous one did, and retains its close balance of Democrats and Republicans. Cook rates the race as a toss-up.

“This district is trending the wrong way for Democrats,” Hemond said, noting that Trump “performed quite well here” in both 2016 and 2020, and Republicans have picked up state legislative seats in the area.

“A quality Republican candidate could be [a threat]” to Kildee,” he continued.

In Kildee’s favor, Hemond noted that Kildee’s uncle, Dale Kildee, was a popular congressman from the area for 36 years, and Kildee carries an advantage as the incumbent.

Kildee has been endorsed by J Street in previous races and was one of the few Democrats who defended Minnesota Rep. Ilhan Omar (D-MN) from accusations of antisemitism stemming from February 2019 comments that support for Israel is “all about the Benjamins,” saying in an interview at the time, “I wouldn’t take it as antisemitism.”

“We ought to be careful not to construe that in anything other than a concern about the fact that money has undue influence on political decision-making,” he added.

The final uncertainty on the map will be the new, Republican-leaning 10th District, north of Detroit, which Cook rates as “Likely Republican.” No incumbent member is running in that district. Eric Esshaki, who lost to Rep. Haley Stevens (D-MI) in the area by 2.4 percentage points in 2020, has announced his candidacy, but Republicans are also attempting to recruit two-time failed Senate candidate John James to run for the seat. James is reported to be “seriously considering” a bid.