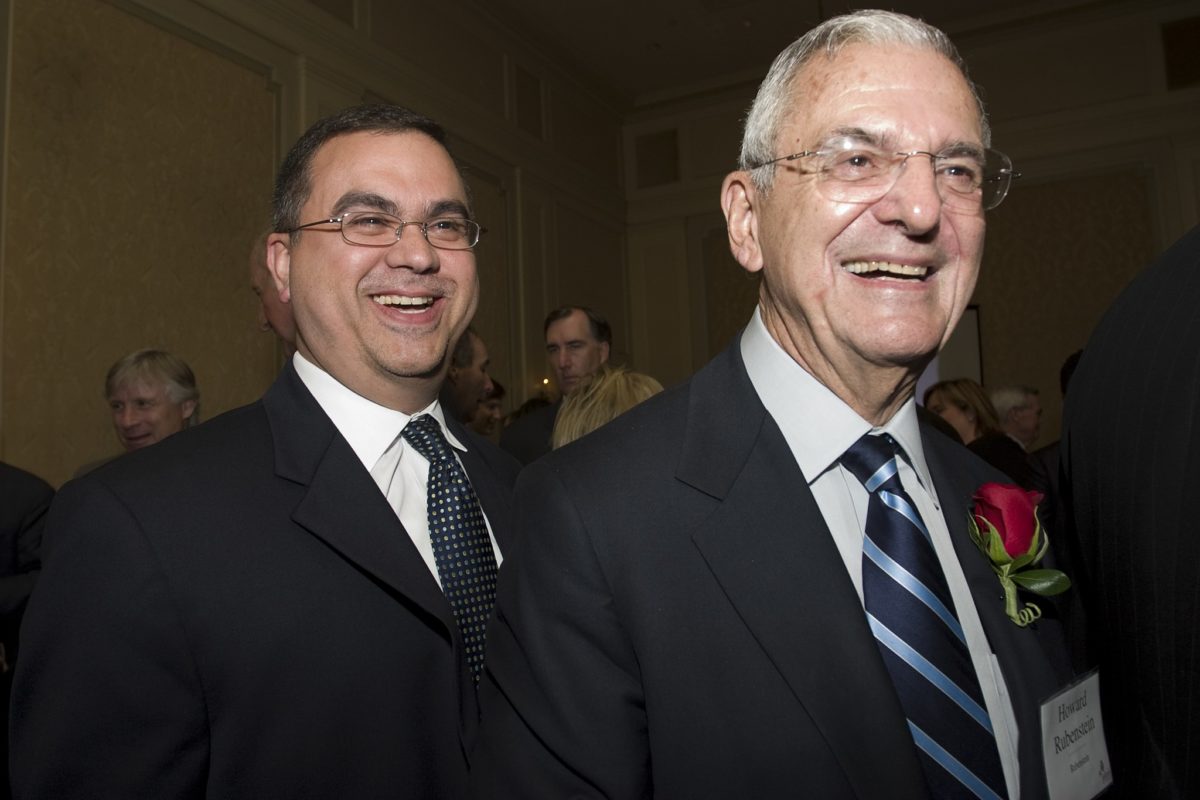 Howard Rubenstein was remembered this week as a master publicist whose creativity and brilliant instincts helped him respond to all kinds of public relations challenges and to orchestrate some of the city’s most memorable fundraisers and protest demonstrations on behalf of the Jewish people.

Rubenstein, who died last Tuesday in his Manhattan home at age 88, believed the public relations firm that bears his name was successful because “he did things the right way, he was ethical and straight, and he had a very strong moral compass,” said Rabbi Haskel Lookstein, rabbi emeritus of Congregation Kehilath Jeshurun in Manhattan.

In fact, Lookstein said, “every year he had an ethicist come in and address all of his employees. It reflected his strong belief that doing things right was not only good but also created the groundwork for success.”

For more than 65 years, Rubenstein was the “go-to guy” when trying to predict the public reaction to different events, recalled Jeffrey Solomon, a former chief operating officer of UJA-Federation of New York.

Rubenstein helped orchestrate one of the earliest protest demonstrations on behalf of Soviet Jewry on Jan. 17, 1965, after the Soviets “were stupid enough” to move their mission to the United Nations to East 67th Street across from the Park East Synagogue in Manhattan, according to Rabbi Arthur Schneier, the congregation’s spiritual leader.

Schneier said his Appeal of Conscience Foundation took out a full-page ad in The New York Times announcing the demonstration to protest religious repression in the Soviet Union. The Soviets quickly protested the planned rally to the U.S. State Department, “calling it a violation,” and Schneier said he then realized he “needed some PR guidance.”

The demonstration was ultimately allowed to go on.

“I couldn’t afford a major firm and someone recommended that I turn to Howard,” Schneier recalled. “We became very close friends and from then on, any major event I had at the synagogue for the Appeal or for when Pope Benedict came in 2008 — it was the first papal visit to a synagogue in the United States — Howard personally took charge. He came down and worked out all of the details. Later, when you walked into his office, there was a picture of Pope Benedict, Howard and me.”

“He was a gentle, kind man with grace and a man of integrity,” the rabbi added.

Rubenstein also helped orchestrate another demonstration on behalf of Soviet Jewry that was timed to coincide with an address to the opening session of the U.N. General Assembly by then-Soviet Premier Leonid Brezhnev on Aug. 26, 1972.

The Greater New York Conference on Soviet Jewry arranged with New York State officials and state lawmakers to be temporarily deeded tiny Belmont Island in the East River opposite the United Nations. The small man-made island — created from rocks and other rubble dug up for a subway tunnel in 1905 — was briefly renamed “Soviet Jewry Freedom Island” by activists who landed on the island by boat that morning with a 15-by-6-foot red and white banner proclaiming the new name.

The Soviets spotted the boat and the banner from their windows in the U.N. and complained to U.N. Secretary-General Kurt Waldheim, who filed a complaint with the New York City Police Department. The NYPD dispatched a police boat to the island, but officers backed off when the demonstrators showed them their deed to the island. Among the protestors was then-Bronx Borough President Robert Abrams; then-Manhattan Borough President Percy Sutton; and Sister Rose Thering of Seton Hall University, according to Malcolm Hoenlein, who was then the director of the Greater New York Conference on Soviet Jewry.

Catching all of the action were scores of reporters and camera crews aboard a rented tug boat Rubenstein had arranged to ensure maximum media coverage, Hoenlein recalled.

“We made the front page of newspapers from Hong Kong to Africa, and the major Chinese papers as well,” Hoenlein said. “It was such a putdown of the Russians and Rubenstein was in his office handling the PR. When he saw a good, creative idea for the Jewish people, he was always there.”

Zeesy Schnur, then the executive director of the New York Conference, credits Rubenstein “with helping us develop relationships with different reporters and journalists. I have tremendous respect for him; he was very special.”

Rubenstein also participated in conversatons to determine the site for the Museum of Jewish Heritage-A Living Memorial to the Holocaust at the southernmost tip of Manhattan opposite the Statue of Liberty and Ellis Island, and he later became vice chairman of its board, said George Klein, a co-founder of the museum.

“He was an extraordinary public relations person who loved the city and was deeply committed to the Jewish people and the community,” Klein said. “He was a mensch. Even if you had a serious discussion with him, everyone left the room as friends.”

Dr. Ruth Westheimer, a fellow board member of the museum, said Rubenstein was a “very important member of the board who was wonderful at board meetings. I learned a lot about PR from Howard that I used in my professional life.”

Judah Gribetz, another museum board member, said that at the early stages, “when we had to build the museum and the exhibitions, his staff was instrumental in helping our staff. He was wise with his contributions and his wisdom.”

David Marwell, a former director of the museum, said Rubenstein “had brilliant instincts about how to respond to any kind of challenge. He was famous for crisis communications.”

The Museum of Jewish Heritage was the closest cultural institution to the World Trade Center on 9/11 and although it was not damaged, the entire area was cordoned off in the weeks after the attack.

“We didn’t know what was going to happen to the neighborhood and we were planning a new addition to the museum,” Marwell said. “Howard said that since part of the message of the museum was about rebuilding life after a great tragedy, we could use that theme to help us. Howard was able to communicate that and when we reopened on Oct. 5, 2001, Gov. George Pataki and Sen. Hillary Clinton came. He helped us to organize the rebuilding in a way that was absolutely authentic and true to who we were.”

“We worked with him on a range of matters just to seek his guidance, including the annual Celebrate Israel Parade,” said Miller, who noted that Rubenstein was a JCRC board member and that his wife, Amy, took his seat when he retired. One of their sons, Steven, now holds that seat.

“He invited to the table his clients in the corporate world and even those who were not his clients but were associates of his,” said Miller. “He was the most networked member of the Jewish faith in New York. He knew everybody and he would pick up the phone and call the mayor and the governor. He did so much good behind the scenes that people were totally unaware of to assure the safety and security of the Jewish people. And he did it unassumingly.”

Miller recalled that Rubenstein kept hard hats in his office from all of the real estate moguls he represented over the years. When the Museum of Jewish Heritage was being designed, Miller made space for the museum staff to work from the JCRC office.

After the groundbreaking, Rubenstein gave Miller a silver shovel and hard hat from the event “as a way of saying thank you.”

After the appointment of Cardinal Edward Egan as the archbishop of New York in 2000, Miller said Rubenstein held a dinner in his home for Egan to meet with representatives from the JCRC. He also held a series of meetings in his home with authors, political figures and power brokers.

“He had better access to power brokers than anybody I ever met,” Miller said.

Solomon of UJA-Federation of New York recalled that Rubenstein was successful in getting many of his clients to “become honorees at UJA-Federation fundraising dinners, and they were very successful. I remember meeting with Howard to decide who we were going to honor one year and we chose Rupert Murdoch, who at the time was known for his strong pro-Israel views that were reflected in all of his media. The idea of having somebody who was not a traditional speaker at these events and who is not Jewish — it was an inspired moment.”

Rubenstein also arranged for then-New York City Mayor David Dinkins and the leadership of the Archdiocese of New York, which he represented at the time, to meet with the leadership of UJA-Federation at his home for a cocktail party, Solomon recalled. “The event was to express our appreciation to our major donors and some of those who came had never attended a UJA event. It was such a fun event and it was all Howard’s idea.”

Rubenstein is survived by his wife, Amy; his three children, Roni, Richard and Steven; and seven grandchildren.