Candidates take aim at Bloomberg during his debate debut 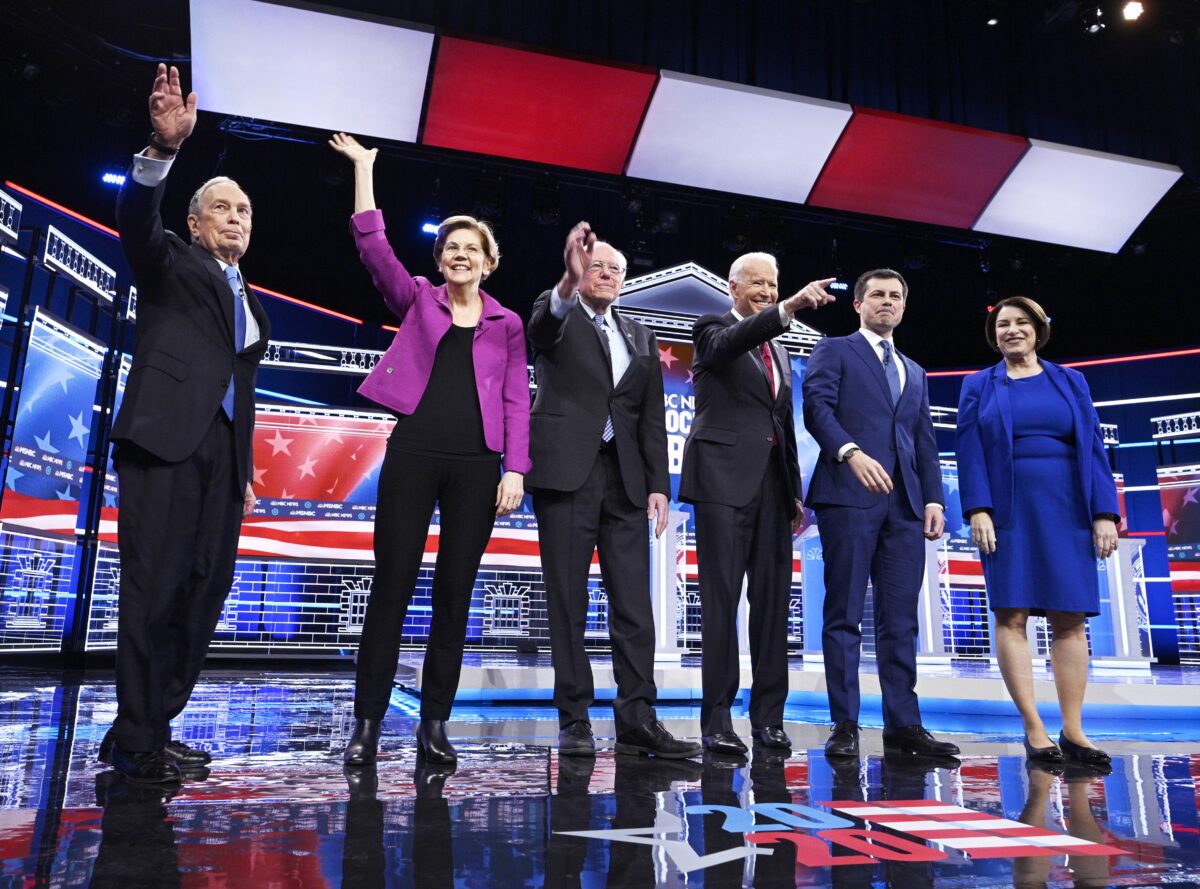 At a feisty and contentious debate Wednesday night, the 2020 Democratic presidential candidates aimed their fire at newcomer Mike Bloomberg, attacking him over not releasing his tax returns, his Stop and Frisk policies as mayor of New York City, his past comments about women and the NDA agreements signed by some of his former employees.

First timer: Bloomberg had a rough time early on during his debut debate performance in Nevada Wednesday night, stumbling over some answers, drawing fire from everyone on stage — as well as the moderators — and staying largely silent during repeated attacks. The former New York City mayor said he will release his tax returns in a few weeks, as they are too complicated to publish immediately: “Fortunately I make a lot of money,” he said, and “the biggest item is all the money I give away,” information he said is already publicly available.

Answering for the past: Sen. Elizabeth Warren (D-MA) slammed Bloomberg — “an arrogant billionaire” — repeatedly over his alleged past treatment of women, citing his comments calling members of the royal family “horsey-faced lesbian” and “fat broad.” She also called on Bloomberg to publicly release former female employees from non-disclosure agreements they signed after settling complaints, which he declined to do. In his defense, Bloomberg said he has “no tolerance for the kind of behavior that the #metoo movement has exposed,” and said it was possible that at times maybe some female employees “didn’t like a joke I told.”

Health matters: Bloomberg and Sen. Bernie Sanders (I-VT), the two oldest candidates in the race, who are both 78, also briefly sparred about their health. Asked by moderators about releasing his full health records, Sanders demurred, and then pointed out that he and Bloomberg have at least one thing in common: “You have two stents as well.” Bloomberg shot back: “Twenty-five years ago.”

Comeback: Bloomberg enjoyed a stronger moment when he contrasted his business background with the rest of the field during a discussion over economic empowerment. “I’m the only one this stage who started a business. Is that fair?” he asked, looking at his fellow candidates, who stood silently. He also highlighted that Sanders failed to fix the tax code as a member of Congress. “You have been writing the tax code, why are you complaining? You wrote the code,” Bloomberg told the Vermont senator. He also hit back at Sanders, saying: “The best-known socialist in the country is a millionaire with three houses. What did I miss?”

Spin room: Steve Grossman, the former chairman of the Democratic National Committee and currently a co-chair of former South Bend Mayor Pete Buttigieg’s campaign in Massachusetts, tells JI’s Jacob Kornbluh that Bloomberg had a “disastrous night” because he came into the debate “with high expectations” and “demonstrated pretty clearly that he was not ready for prime time.” Grossman maintained that his candidate stands to benefit most from Bloomberg’s poor performance because it “opened the lane for the centrist candidates in the race to regain momentum.” He added that Buttigieg — going after Bloomberg and Sen. Amy Klobuchar (D-MN) — demonstrated that “he can be tough and strong and go after another candidate who is rising” while still being “thoughtful and inspirational.”

Bloomberg’s campaign manager, Kevin Sheekey, noted that, “it took him just 45 minutes in his first debate in 10 years to get his legs on the stage. He was just warming up tonight.”

Mike the mensch: Former Miami Beach Mayor Philip Levine, a surrogate for the Bloomberg campaign, explained that the former NYC mayor was “acting as a gentleman” in his first-ever presidential debate. “When you have a gang of five going after you, it’s a challenging situation,” Levine told JI following the debate, comparing it to a boxing tournament pitting five boxers against one rival. “They tried everything in their power to get under his skin and I think Mike handled it well. It was very clear that they are incredibly threatened by Mike Bloomberg,” Levine added. “I think the person that most enjoyed the evening was Donald Trump, because what he wants more than anything in the world is to be able to go up against Bernie Sanders.”

Friendly advice: Levine acknowledged that going into the next debate in South Carolina, Bloomberg will need to up his game: “He needs to speak more from his heart. He needs to swing, he needs to punch and need to counterpunch.”

Israel angle: There was little-to-no discussion of foreign policy during the two-hour debate. But in defending her knowledge of international affairs after not being able to name the Mexican president, Sen. Amy Klobuchar (D-MN) boasted that she’s well aware of many facts about foreign governments, including that the Israeli Knesset has 120 members. Former South Bend Mayor Pete Buttigieg conceded that he “actually didn’t know how many members are in the Knesset, so you got me there.”

Case to Jewish voters: Buttigieg surrogate Grossman — who served as the president of AIPAC from 1992-1996 — said Buttigieg was at least being honest in his answer. “In all of the conversations that Pete and I have had — we’ve had many — I think Pete’s unshakable commitment to the strength and importance of the U.S.-Israel relationship is something that means a great deal to me. Pete, to me, is a candidate who will be there in good times and in bad times… As you and I both know, Israel’s enemies will be looking for a lack of commitment, a lack of strength and lack of resolve when it comes to the U.S.-Israel relationship.”