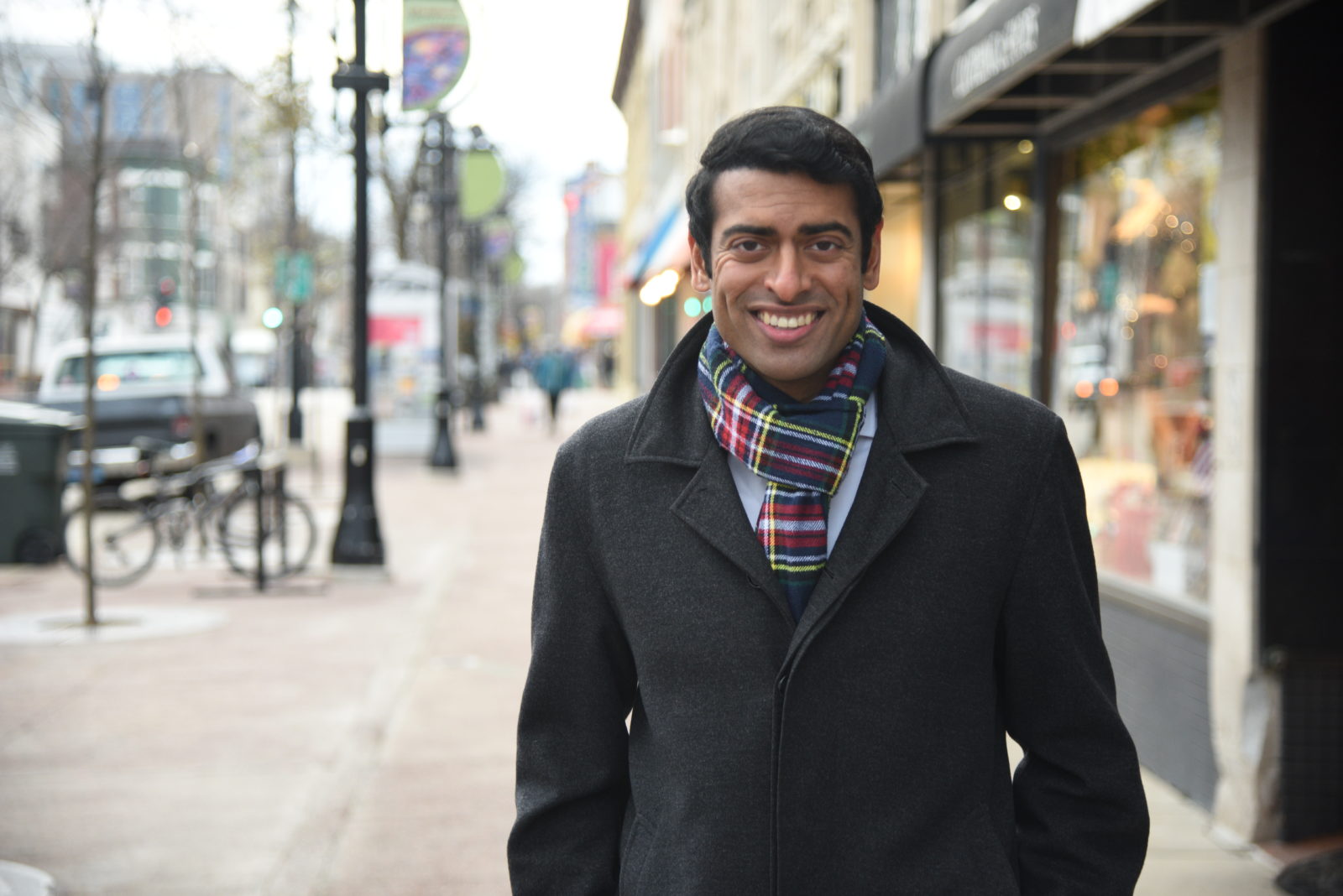 MADISON, WISC. — Steven Olikara, a 31-year-old political activist from Milwaukee, is likely the only Democratic candidate in Wisconsin’s crowded Senate primary who once played guitar in a Klezmer band — a personal tidbit that, on first glance, may seem largely irrelevant to his current campaign.

But on a recent afternoon in downtown Madison, he suggested that his experience communing with Jewish folk music was by no means trivial. Olikara pulled out his iPhone and shuffled through a few of the tunes he had recorded as a high school student with his former group, the Red Squares, including a sprightly rendition of “Shalom Aleichem” — the sine qua non of any Klezmer repertoire — as well as an incantational “Hana’ava Babanot,” featuring hand drums and violin.

The music was raw and the mix was off at points, as Olikara acknowledged, but despite the winking band name, there was no denying a genuine sense of respectful engagement with the form.

While none of the band members were Jewish, Olikara noted, they all shared a mutual affection for Eastern European folk music after watching “Dr. Zhivago,” the romantic epic based on Boris Pasternak’s novel of the same name that had introduced the balalaika to an international audience in the mid-1960s. It was only a matter of time, then, until “Lara’s Theme” led them to “Hava Nagila.”

“One day, one of our biggest fans came over and said, ‘I’m going to pay for a full-page ad in the Milwaukee Jewish Chronicle for you guys,’” Olikara told Jewish Insider last week on a midday stroll through Madison’s Capitol Square, where he had just wrapped up a campaign event with the local Rotary Club. “We had a good number of gigs after that.”

Those days, of course, are far behind him. “We disbanded about 10 years ago,” he said, “but we were pretty big in the Milwaukee Jewish community.”

Olikara, who hasn’t held public office before, is the founder of a nonpartisan youth advocacy group, the Millennial Action Project, that aims to bridge political divides through involvement on such issues as voting rights, climate change and criminal justice reform. He says he is bringing a similar ethos to his Senate campaign, which he announced in September following a statewide listening tour.

But Olikara, who graduated from the University of Wisconsin-Madison with joint majors in political science and environmental studies, said that his musical forays with a variety of groups over the past couple of decades have proven equally instructive for him as he meets with voters across the Badger State.

“I’ve talked about this sometimes on the campaign trail, about how music is a powerful force to bridge a lot of the divides in our society,” he said, taking a seat on a nearby bench as he reflected on the driving ethos of his Senate bid. “When I was growing up playing music, I was connecting with all of these different cultures, and in many ways, I’m trying to bring that spirit of togetherness in music into our political sphere.”

Over the past few months, Olikara says he has incorporated live music into several of his campaign events, and he often brings his guitar with him on the trail, ever prepared for an impromptu jam session.

Though Klezmer was more than simply a passing fancy, Olikara said he first became interested in music when, as a second-grader, he saw a local rock band perform in Milwaukee and was immediately hooked. “I thought that was the coolest thing,” he told JI. Soon enough, he had convinced his parents to buy him a guitar, and joined his first rock band in fifth grade. He played his first show that summer.

Later, in high school, Olikara picked up the drums and began playing in “multiple jazz groups,” he said, influenced by such mid-century luminaries as Art Blakey and Philly Joe Jones.

It was jazz, the ultimate American art form, that would influence him most deeply as he began thinking about politics as a career path. “Jazz is the one that really formed me as a person and how I look at the world,” he said. “I think it’s because of the kind of spaces that jazz music creates. It all starts, first of all, with listening, which, I think, is the most important skill in jazz.”

The second building block, he said, is improvisation. “What that means is it invites you to be fully present in conversations,” he told JI. “It’s not about checking your ideas or your values at the door — it’s about bringing your full self.”

Third but not last is call and response. “I think our democracy, at its best, is a call-and-response political system,” Olikara said. “But right now, it’s devolved into more of a call-and-shut-down kind of conversation.”

Olikara has brought that ethos to the stump, where he likes to think of his speeches as jazz pieces. “There’s a head, an A section, a B section, then a C, and then you go back to the head,” he said. “Jazz has not only helped inspire this political vision,” Olikara ventured. “It’s the framework for how I engage day-to-day at all of our events and how I connect with audiences.”

“The skills I learned in jazz, which create these spaces rooted in empathy, dignity and respect,” he said, have undergirded not only the campaign but his work with the Millennial Action Project for nearly the past 10 years.

Despite that unique approach, Olikara, whose parents settled in Milwaukee from Kerala, in southern India, in the early 1980s, had long anticipated a different path for himself. “Like a good son of Indian immigrants, I figured I would become an engineer for most of my life,” he said. “Every male in my family did go into engineering.”

Yet primarily through music, “I became interested in people,” he said. “That led to an interest in public service, particularly how you can bring people together across lines of division.”

Olikara is among a dozen Democratic Senate candidates competing to replace Sen. Ron Johnson (R-WI), who has yet to announce if he will seek reelection in the midterms next year.

The limited publicly available polling suggests that Olikara likely has some ground to gain if he hopes to contend with apparent frontrunners like Mandela Barnes, Wisconsin’s current lieutenant governor, and Alex Lasry, who most recently served as senior vice president of the NBA’s Milwaukee Bucks and previously worked in the Obama White House as an aide to senior advisor Valerie Jarrett.

Alex Lasry’s full-court press for the U. S. Senate

But Olikara, whose most high-profile endorser so far is former Wisconsin Lt. Gov. Barbara Lawton, argues that he is gaining momentum. “Really where I think our campaign differentiates itself is we are activating what some researchers have called ‘the exhausted majority,’” he said. “People who feel disillusioned by politics right now, and who feel left out, and feel like politics is not responsive to their daily challenges.”

More specifically, Olikara says the Indian-American community in Milwaukee, with whom he has done several events, is receptive to his vision. “We were recently at a Sikh temple, and just looking at the photos from that, I remember thinking, that’s just an image that’s never happened before, where you have an Indian running for the U.S. Senate at a Sikh temple and wearing the head covering,” he said. “It’s been really powerful, and I think the Indian community is able to see that this is going to be really powerful for their children.”

Growing up Indian in a largely white city, Olikara told JI, “probably” played a role in shaping his message. “Yes, there was discrimination when I was growing up as a South Asian person of color,” he told JI. “But there were also moments of true community, too, so both are true at the same time, and I want to try and increase the positive associations we have with people.”

He is also gaining support from Jewish community leaders as well as pro-Israel advocates at the state and national levels. Among those who have contributed to his campaign, which has pulled in more than $160,000, are Moses Libitzky, a donor to Jewish causes in San Francisco, and Hannah Rosenthal, who was the Obama administration’s special envoy to monitor and combat antisemitism.

“My interest in supporting pro-Israel issues and supporting the Jewish community here starts with the people who I love most — my close circle of friends,” said Olikara, emphasizing that his engagement with Jewish issues extends well beyond Klezmer. “Hearing their passion for Israel has truly moved me on a deep level, and so we’ve had conversations over the years about a number of the pressing issues both facing Israel and the Jewish community here in the U.S.”

Olikara, who lays out his Middle East foreign policy approach in a position paper shared with JI, said he had been scheduled to visit Israel in 2020 through the Schusterman Foundation’s REALITY program — but the trip was postponed because of the pandemic. “They just sent the email out about restarting the program,” he said. “I look forward to visiting soon.”

“When we talk about dignity for all, that extends to a lot of the pressing issues in terms of peace in the Middle East,” Olikara said, adding that he is also focused on the Boycott, Divestment and Sanctions movement targeting Israel, which he describes as antisemitic, and addressing the recent uptick in hate crimes across the country. “My passion for supporting the Jewish community and Israel,” he explained, “really aligns closely with the core mission of the campaign.”

Olikara said there is “no single archetype that fully captures” his approach, though he does express a strong affinity for Rep. Ritchie Torres (D-NY), “especially when it comes to issues facing Israel and the Jewish community.” The 33-year-old Bronx congressman, who has described himself as “the embodiment of a pro-Israel progressive,” built a close connection with the Jewish community during his House campaign last year.

“In the Senate, I think Chris Coons is definitely a model,” Olikara said of the Delaware senator who chairs the Senate Ethics Committee and is well known for his extensive foreign policy experience. “He’s a true public servant,” Olikara said. “In Congress, you have people who are workhorses and you have show horses, and Chris Coons is definitely a workhorse.”

Olikara suggested that he would strive for a similar level of engagement if he is elected, though it will no doubt come at the expense of his other passion.

“I’m still playing music these days. I’ve been recording some stuff,” Olikara said. “But the campaign is pretty all-consuming.”