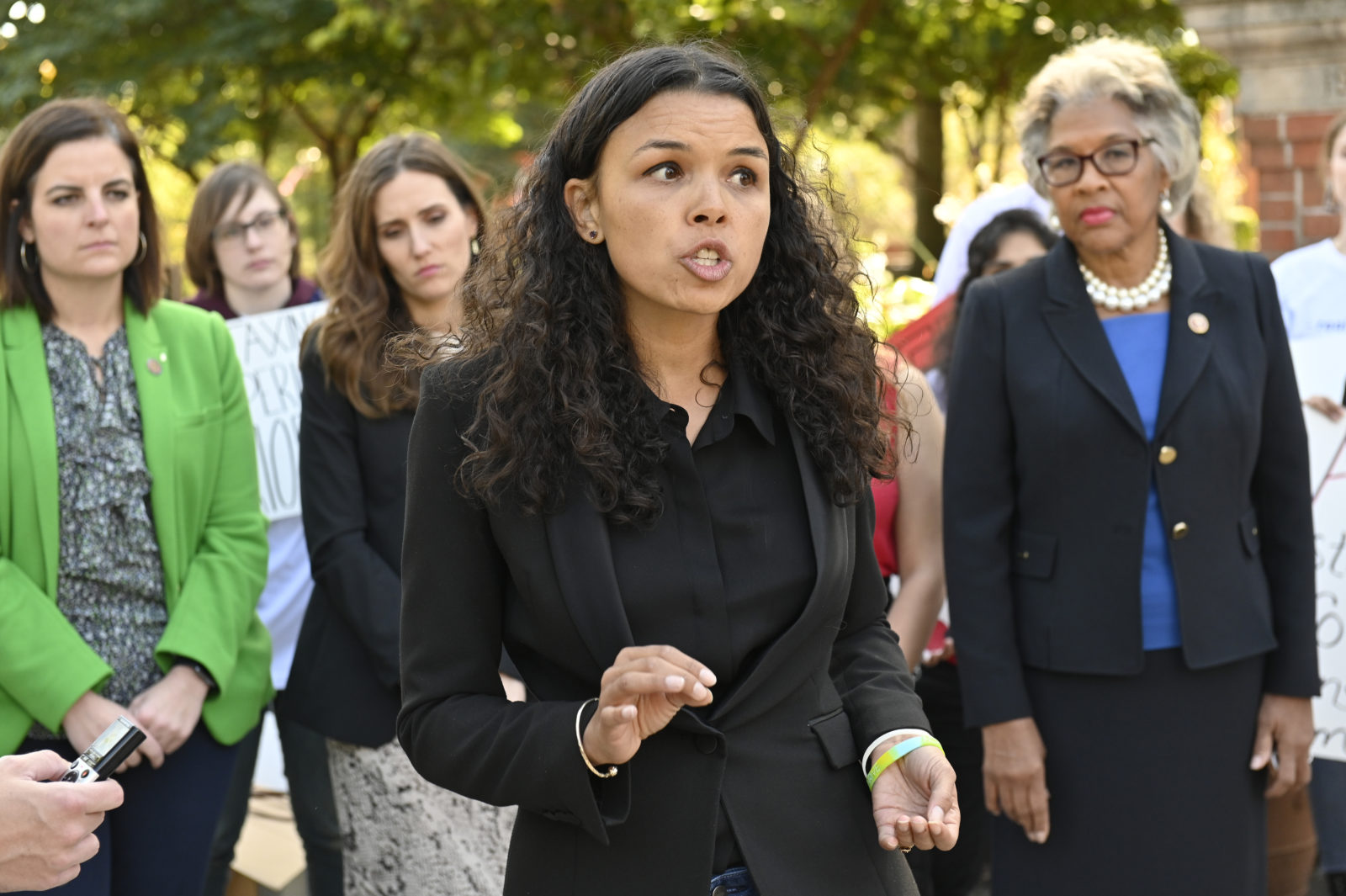 The former congressional candidate will go up against Rep. Tim Ryan (D-OH) in next year's Democratic Senate primary

Morgan Harper, a progressive Democrat who ran an unsuccessful campaign to unseat Rep. Joyce Beatty (D-OH) last year in Columbus, is now setting her sights on the Senate. On Wednesday, the former congressional hopeful declared her candidacy in Ohio’s upcoming open-seat election to replace Sen. Rob Portman (R-OH), who is retiring at the end of his term in 2022.

“Ohio needs fresh new leadership in Washington and a new game plan built from the ground up, door by door, block by block,” Harper said in a fiery campaign kickoff video. “They’re counting Ohio out. They’re counting me out,” she added. “But they don’t know the power that lies in you and the fight that lies in me.”

Her announcement, which had been expected, sets up a possibly contentious Democratic primary showdown with Rep. Tim Ryan (D-OH), the longtime Youngstown congressman who jumped into the race this past April. Until this week, he had been running unopposed while pulling in a sizable $3.1 million fundraising haul, according to the latest filings from the Federal Election Commission.

Still, Harper, 38, is facing potentially long odds as she mounts her first statewide bid, where she will need to build name recognition, rack up endorsements and overcome a steep fundraising deficit even as she abjures donations from corporate political action committees.

Last cycle, Harper ran an aggressive grassroots primary challenge against Beatty in Ohio’s solidly blue 3rd Congressional District, raising nearly $1 million while earning endorsements from prominent progressive groups like Justice Democrats and the Working Families Party. But she was still soundly defeated by a margin of nearly 37 points as the emerging coronavirus upended the election, which was conducted largely by mail.

Beatty, the powerful chairwoman of the Congressional Black Caucus, was one of several mainstream Democrats who rallied behind Brown in the hotly contested open-seat special election that came to embody a deepening rift between moderates and progressives in the House.

Whether the Senate primary will play out along similar lines remains to be seen. Earlier this month, amid rumors that Harper’s Senate announcement was imminent, Beatty threw her weight behind Ryan, a 2020 presidential candidate who is now attracting widespread support from the Democratic establishment.

But while Ryan, 48, is widely viewed as a centrist — having previously expressed resistance to such left-wing agenda items as Medicare for All and the Green New Deal — the Ohio-born Senate candidate “has worked to burnish his own progressive credentials in recent months,” according to Paul Beck, a professor emeritus of political science at The Ohio State University.

The congressman’s strong labor connections will no doubt be helpful as he seeks to maintain his advantage over Harper, a community organizer who casts herself as a champion of workers’ rights.

“From now through next November, Tim will be taking his relentless focus on workers to every corner of Ohio,” Izzi Levy, a spokesperson for the Ryan campaign, emphasized in a statement to JI on Wednesday, “building on the momentum he’s already earned and continuing to win the support of Ohioans in his fight to cut workers in on the deal in the U.S. Senate.” 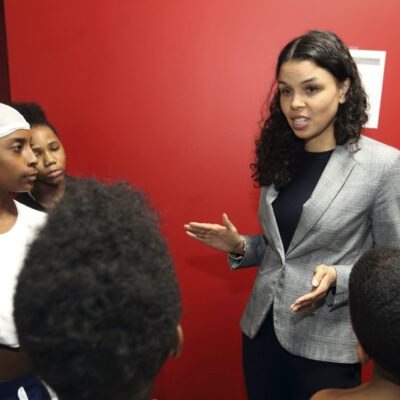 Harper, a graduate of Stanford Law School, previously worked as a senior advisor in the Consumer Financial Protection Bureau during the Obama administration. Before announcing her Senate run, Harper was a director of policy and advocacy at the American Economic Liberties Project and helped found Stand Up Columbus, a local activist group.

It is unclear if Harper will secure another endorsement from Justice Democrats, which could make the race more competitive while lending her campaign a veneer of institutional gravitas within the national progressive fundraising community. (The group did not respond to a request for comment from JI.)

But even without an imprimatur from Justice Democrats, Harper’s long-shot campaign shouldn’t be counted out, said Nathaniel Swigger, a political scientist at The Ohio State University at Newark.

“If Harper can raise money and she has a 20% chance at winning while she can highlight progressive issues, then it’s probably worthwhile,” Swigger told JI. “Ryan is the favorite, but he could stumble. Harper could tap into young voters. There’s so much money sloshing around in electoral politics right now that the standard for ‘viable’ is pretty low.”

While the Democratic primary field could expand as the race progresses, experts questioned whether any future candidates with enough standing to seriously contest Ryan would emerge.

In her first video ad, Harper indicated that she intends to focus in part on turning out Black voters in Ohio, a pivotal battleground state that represents one of a smattering of opportunities for Democrats to expand their razor-thin majority in the Senate next year.

The Columbus native, who is Black, positions herself as a staunch advocate for such domestic concerns as universal healthcare, racial justice and curbing climate change — the sine qua nons of any progressive platform. But her foreign policy views aren’t so plainly articulated, and she makes no mention of international matters of any sort on the issues page of her campaign site.

During her last campaign, Jewish community leaders in Columbus took issue with Harper’s seemingly ambiguous stance on Israel, not least because of her affiliation with Justice Democrats, which has characterized Israel as a “human rights violator” and supports conditioning American foreign security assistance to the Jewish state.

Despite repeated requests for clarification from JI at the time, Harper’s campaign would not confirm whether she agreed with Justice Democrats on Israel, in contrast to several of her far-left allies who are more openly critical of the Jewish state.

“She is not so clear on her positions when it comes to things like Israel,” Justin Shaw, director of Jewish community relations at the nonprofit organization JewishColumbus, said of Harper. “We don’t know much of where she stands solidly because I don’t think she’s clearly defined her positions.”

In an interview with JI last year, Harper expressed an affinity for the local Jewish community and said she was interested in visiting Israel. She also did not immediately rule out the possibility of attending AIPAC’s annual policy conference, which Sanders boycotted in 2020, accusing the pro-Israel group of providing a “platform” for “leaders who express bigotry.”

But she seemed reluctant to discuss her views on Israel in much depth, often resorting to vague bromides that revealed little of substance about her approach to the Middle East.

“I believe people in Israel have human rights and I respect that human rights are something that need to be preserved all over the world,” Harper said in March 2020 at a public library in Columbus after participating in a candidate forum. “My platform is primarily focused on the rights of those living in the 3rd District, but one of the tenets of my life, I would say, is that until all of us are free, none of us are free — and I am committed to making sure that rights are protected.”

As the conversation progressed, a spokesperson for Harper, sitting nearby, interjected. “She agreed to talk about the campaign and the race here in the 3rd District,” the spokesperson informed JI, though no such agreement had been made beforehand. “So if you could kind of allow her space to talk about what she’s planning to do for the people here and maybe save the foreign policy for when she’s elected, that would be our preference.”

Avoiding such discussions as a Senate candidate will presumably be more difficult for Harper. Asked directly by JI on Wednesday if she supports conditioning aid to Israel — as do several progressive candidates now running for Congress with backing from Justice Democrats — Harper ignored the question entirely.

“Israel has a right to exist,” she told JI through a spokesperson. “So does Palestine. I firmly believe in the peace process. Like many, I have been increasingly concerned about the actions taken by former Prime Minister [Benjamin] Netanyahu and his government that undermined the peace process, and I am also concerned about any exacerbation of violence. I am eager to see what the new government in Israel does to rectify past wrongs and move forward toward a lasting peace.”

Harper was somewhat more forthcoming on the topic of Jewish community outreach.

“The Jewish community has always been a part of my own community from an early age,” she said in written comments to JI. “Growing up on the east side of Columbus, I spent summers at the Jewish Community Center working with children with disabilities. I’m proud of the work we did in our last campaign to engage voters in the Jewish community, especially in the neighborhoods near where I grew up, for example, in Bexley.”

Still, the organized Jewish community in Ohio looks more likely to coalesce behind Ryan, described by local leaders as a strong supporter of Israel who has maintained close contact with Jewish voters throughout his time in Congress.

“The congressman has always had an open door,” Bonnie Burdman, executive director of community relations and government affairs at the Youngstown Area Jewish Federation, told JI. “We see eye to eye on many things. We don’t see eye to eye on everything. But he’s always been open to listening. He’s never denied us a meeting.”

In May, amid escalating violence between Israel and Hamas, Ryan condemned what he described as “the unjustifiable rocket attacks by Hamas” in a strongly worded statement. “Israel has the right to defend itself and take the necessary steps to stop the attacks,” he went on. “The events of the past days demonstrate the danger Israel faces every day. These Hamas attacks endanger the lives and safety of both Israeli and Palestinian civilians and only further highlight why we must continue to strive for peace.”

While the congressman’s comments sparked protests outside his district office in Warren, Jewish community members were “very appreciative” of his support for Israel, according to Burdman. “We let him know that.”

Howie Beigelman, executive director of the nonprofit Ohio Jewish Communities, said the Democratic Senate primary “is shaping up to be a fight between two progressive candidates,” only one of whom has established long-standing relationships with Jewish community members as an elected official.

“Ohio voters already know Tim Ryan,” Beigelman told JI. “For the Jewish community he’s someone with a voting record on Israel, as well as on Jewish community security needs, and on our other domestic policy priorities such as seniors, education, workforce and healthcare.”