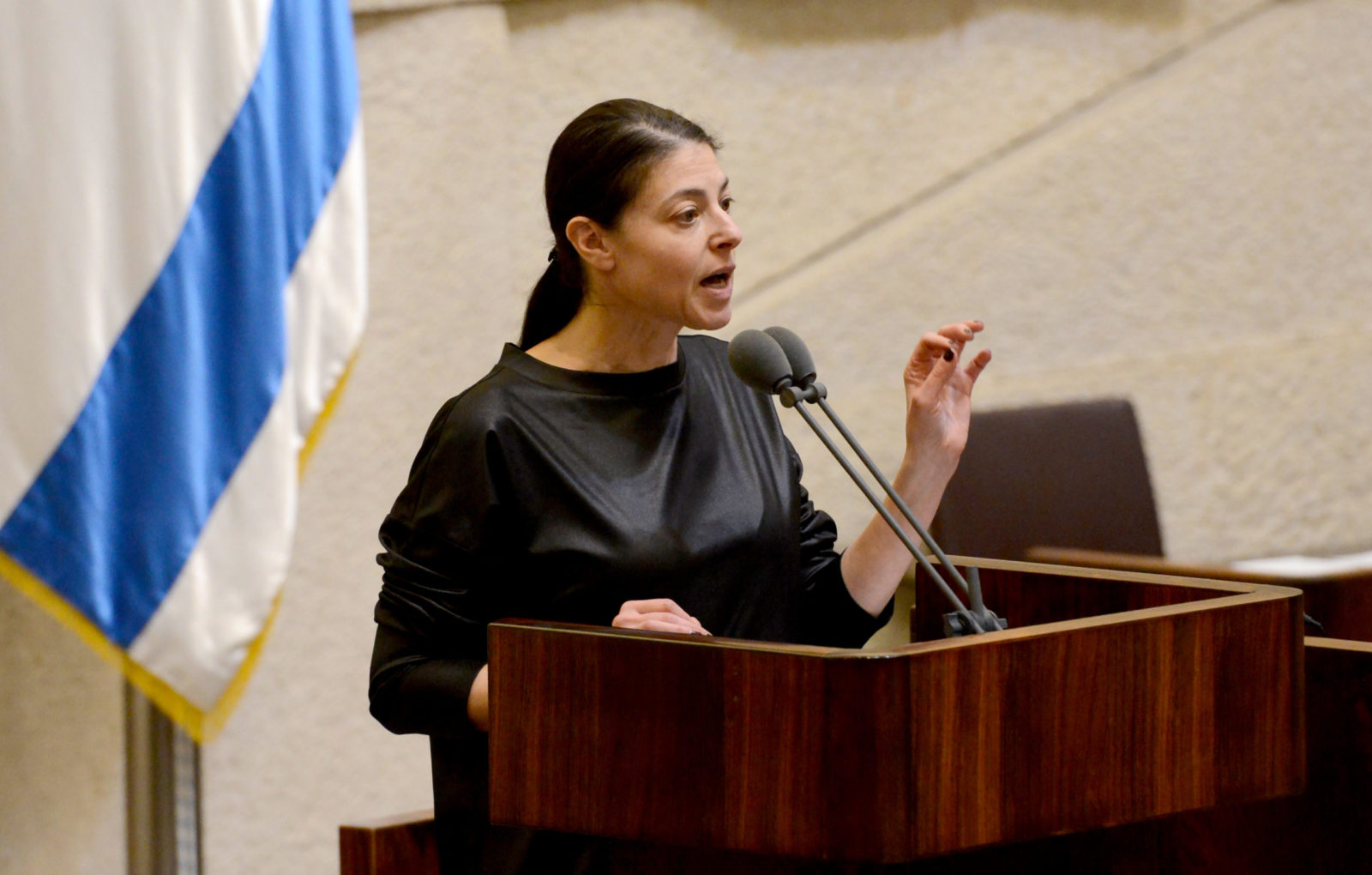 Merav Michaeli refused to let the Labor Party die without a fight.

Michaeli, who was elected head of one of the oldest and once-iconic political parties in Israel last month, battled it out just to be able to hold the primary race that led her to victory. Now, she is fighting to bring Labor back from the brink of irrelevance and turn it once again into the home of the Israeli left.

Can she succeed against the odds?

“The party was already considered to be dead and over and done with,” Michaeli told Jewish Insider in an interview this week. “The fact that it’s alive again is something that helps bring people together.”

Michaeli takes the helm of Labor following a particularly fractious period in the party’s history, after former head Amir Peretz joined Prime Minister Benjamin Netanyahu’s coalition government last year — despite his vow not to do so — while Michaeli remained in the opposition.

After Peretz announced he wouldn’t run in the upcoming election and moved to cancel the party-wide primary, allowing only an internal committee vote, Michaeli appealed to the Supreme Court, which ruled in favor of Labor holding a primary for both its leadership and its electoral list.

Michaeli is now the only female party leader in Israel. And the lifelong feminist activist is not surprised that is the case, even in 2021.

“I’m not surprised, because equality is yet far away from us,” she said. Michaeli posited that women “are educated from day one that power is not feminine,” which often dissuades them from pursuing elected office. And economic inequalities and unbalanced familial responsibilities make it “more difficult for women to be in politics, to have achievements in politics… it’s upsetting, and it’s enraging and we’re fighting against it — but it’s not surprising.”

Michaeli, 54, is a well-known figure in Israel, dating back to well before her political career. A journalist and TV host, she was a regular on Israeli television screens, including in several now-infamous clips of her alongside fellow TV personality-turned-politician Yair Lapid.

She was first elected to the Knesset in 2013, and has been a presence there ever since — with the exception of a few months in 2019. A longtime feminist crusader, Michaeli is known for her signature all-black wardrobe and her use of feminine plural words in Hebrew. She is now tasked with resurrecting  Labor, the once-dominant force in Israeli politics, which has dwindled to single digits in the Knesset, and appeared on the verge of extinction over the past three elections.

Michaeli won’t rule out sitting in a future government with ideological foes including Gideon Sa’ar, or with the haredi parties Shas and United Torah Judaism.

“I do not exclude any part of Israeli society,” she said. “Not Arabs, not Orthodox, not anyone.” While she vows to not sit alongside Netanyahu, Michaeli said when it comes to the other parties, “I cannot rule it out, because it’s obvious that if the outcome of the election is such that it will be a possibility to replace Netanyahu, I think everybody understands that this is a very, very important step for Israel.” In order to accomplish that, she said, “concessions will have to be made, and I may have to be a part of a coalition that contains parts of Israeli politics that I deeply, deeply disagree with.”

But Michaeli believes that, six weeks ahead of the March 23 election — Israel’s fourth in two years — such discussions are premature.

“What I want to focus on right now is convincing as many more Israelis as I possibly can that if they want to replace Netanyahu, but they want to replace him with a potential for the Israel they believe in — which is the home of the Jewish people with equality and a government and a country that takes care of its citizens and invests in the social services that the citizens deserve and that sees security as something that comes with peace, not only with far-away countries, which are very important, I voted for the [Abraham Accords], but also here at home with the Palestinians — then they do not need to vote for Gideon Sa’ar, and not for Naftali Bennett, and not for Yair Lapid, but rather for Labor, which has this vision, and is now on a course to growing again into a party that can one day make it happen.”

Political observers say Michaeli could be the one to steer Labor back to relevance.

“Michaeli is sort of the surprise of the left so far,” said Tal Shalev, political correspondent for Walla! News. “Nobody saw her rise coming, and they underestimated the value of the Labor Party, and thought it was a dead brand.”

Gayil Talshir, a political scientist at the Hebrew University of Jerusalem, said “it’s tough to be a woman leader or a woman politician in the Israeli environment,” especially with significant elements of Israeli society being “machoistic and militaristic… but I think she does have the stamina. I think she can stomach it.”

Talshir suggested that Michaeli may even benefit from being a female leader in this election cycle, when she is contrasted with “that daunting picture of 15 [party] leaders, all of them male, and not even one woman. I think this will have an effect, not just on women, but also on educated middle classes in general.”

Unlike many of the other current party leaders, said Talshir, Michaeli has avoided the trap of personality politics, “and was able to say, ‘Look, it’s not about me, it’s about rebuilding the social-democratic party.’”

Following her primary victory, Michaeli promised to work to merge with other center-left parties in order to build a united bloc. But, ultimately, those negotiations failed, and Ron Huldai’s The Israelis Party and Ofer Shelach’s Tnufa dropped out of the race, leaving Labor to run independently.

Talshir said Michaeli’s decision was understandable — but it could end up costing her.

“Her logic was, ‘This is the democratic party, I want to maintain the voice of the people,’” said Talshir, noting that Michaeli did not even use the option for the party leader to fill a reserved slot on the list. “But I think they would have gotten more than 10 or 11 seats” had they merged forces, she said. “And now she’s around six or seven” in the latest polls.

Shalev said Michaeli chose not to join with any other parties because “she wanted to preserve the [Labor] brand, and she understands the power she has in her hands. But long term, it isn’t necessarily the right decision. Joining with people like Shelach or Huldai could have strengthened her list.”

Michaeli told JI she was happy to see President Joe Biden win the U.S. presidential election, and hopes that Israel can return to being an issue with bipartisan support in the United States.

“President Biden and Vice President Kamala Harris are close friends of Israel and have a deep commitment to security and sustainability and [our] interest,” she said. “I can only hope that as long as Netanyahu is prime minister, he does not repeat the damage that he caused to the relationship with President Obama.”

Michaeli pointed out that “people speak a lot about the gestures that [former President Donald] Trump did, but the most expensive MOU [Memorandum of Understanding] that was ever signed with America was during the Barack Obama administration.” But those gestures from Trump — including moving the U.S. Embassy to Jerusalem and recognizing Israeli control over the Golan — are things Michaeli hopes will remain in place.

“I wouldn’t want anything that is considered to be good for Israel to be retracted,” she said. “But what I want is the things that I consider to be good for Israel achieved, and that is advancement towards a solution for the Israeli-Palestinian conflict, [and] dealing much better with the threat of a nuclear Iran and the rest of the challenges that Iran poses for us. I would want to see the relationship between Israel and both parties in America; I would want to see a good relationship become bipartisan again.”

Michaeli also hopes to “start rehabilitating the trust between Israel and American Jews.” Under Netanyahu, she claimed, “the delegitimization and the exclusion and the lack of rights that the Jews from America experienced is completely inconceivable and intolerable.”

Dealing with issues of religion and state in Israel, including recognizing conversions carried out abroad and allowing non-Orthodox prayer at the Western Wall, “is an Israeli interest long before it is an interest of American Jews,” said Michaeli, decrying the ultra-Orthodox control of the Chief Rabbinate. “If we ever want to have a government in Israel which really achieves pluralism and freedom of religion and genuine equality for all of its citizens, and all of the Jews inside and outside of Israel, then we have to build the political power of the center-left in Israel.”

The Labor Party platform tends to prioritize domestic concerns, including strong social welfare programs, the separation of religion and state, the establishment of civil marriage and an emphasis on equal rights and protections. But the party — and Michaeli — also firmly believes in restarting negotiations with the Palestinians in order to reach a two-state solution.

She decried the recent International Criminal Court ruling that it has jurisdiction to probe Israeli activities as “extremely problematic.”

“It does not promote peace in any way,” she said. “In fact it maybe even makes it more distant and difficult to achieve. When sides get entrenched in a legal process it’s usually more difficult to find a solution. And I believe in a peaceful solution [for] Israelis and Palestinians.”

The Labor Party is known for its high leadership turnover, and Michaeli is its fifth chair in just the past decade. But she believes she can restore the party to a position of respect and importance — no easy task.

“Members of Labor are yearning for someone that they can trust, who is speaking the truth and is standing where they believe they should be standing,” she said. “I’m experiencing the thirst there is for something that is genuine and that allows people to live with themselves, with their choices and their identities.”

Michaeli blames Netanyahu and Likud for leading a “delegitimization campaign” that has contributed to the decline of Labor and the Israeli left.

“Our political camp has been crushed completely,” she said, citing Netanyahu’s rhetoric “against Rabin and against Labor and against Oslo and against the Arabs and against democracy.”

And she warned that the kind of incitement that led to the violent riots at the U.S. Capitol last month is not alien to Israeli society.

“Incitement already brought the assassination of Yitzhak Rabin, the prime minister of Israel,” she said. “So it’s not about what may or might happen in Israel, it’s about what has already happened. And we must make sure it never, ever happens again.”