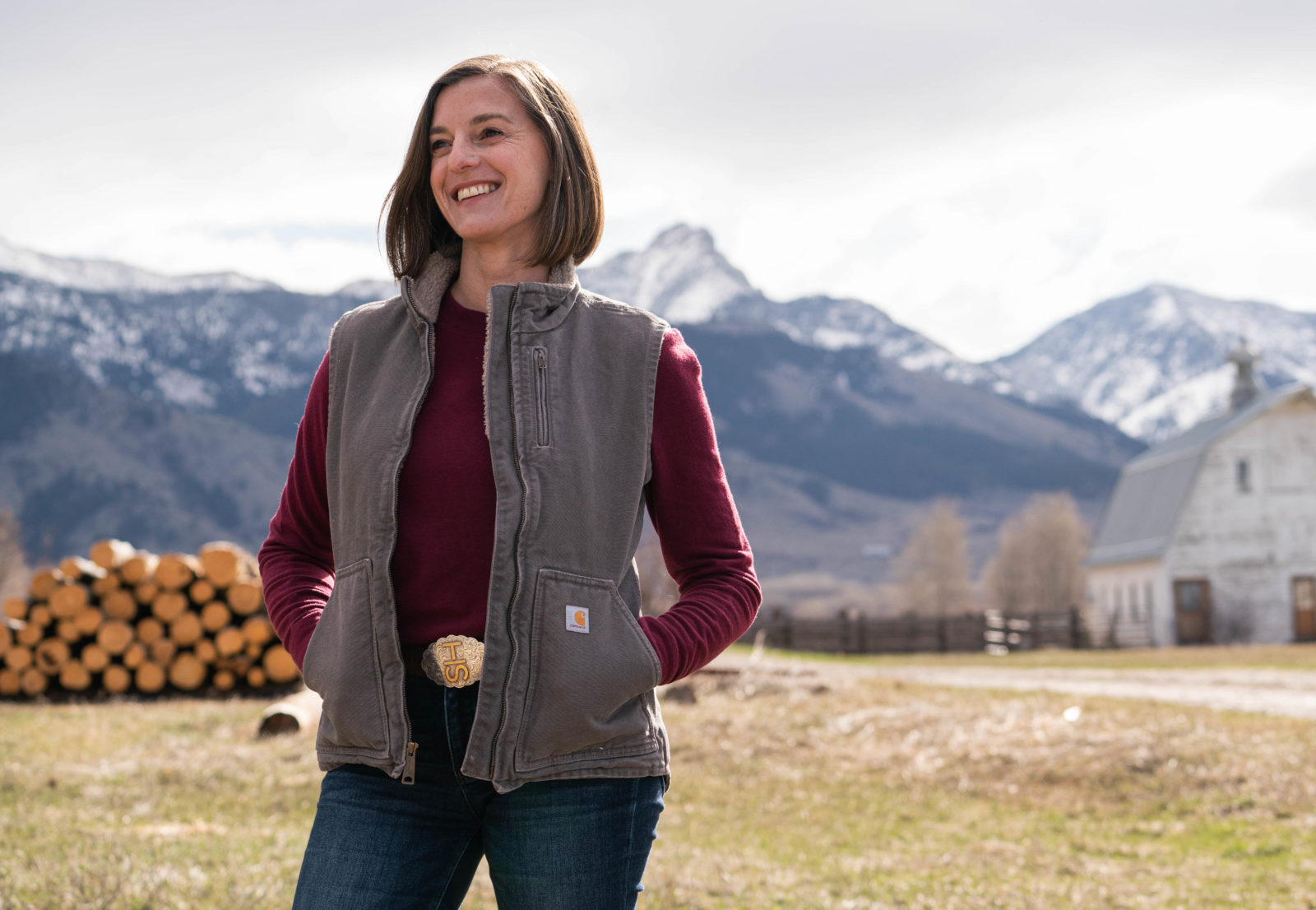 The public health leader got her start in global affairs in the Jewish nonprofit world. Now she’s brought it back to her roots with a run for Congress

The Jewish community in Montana is so small that for half a century,  the city of Bozeman — home to Montana State University — did not have a single operating synagogue until Congregation Beth Shalom opened in 2001.

Beth Shalom is now home to 120 families, but the temple’s president, Jake Werner, only knows of one person in the community who was raised in Montana: Cora Neumann, a Bozeman native who is now running to represent one of the state’s two congressional districts.

“Montana has always been my home,” Neumann told Jewish Insider in a recent Zoom interview. When the nonprofit executive and public health expert moved away for college in the 1990s, she spent more than two decades living far from home. But Montana remained her north star, she added: “It’s like the story of so many Montanans, where you grew up here, you leave for school and work, and you’re on your journey home the whole time.”

Neumann, a Democrat, is making her deep ties to the state an integral part of her campaign, which has centered on the state’s affordability crisis, brought on by wealthy remote workers who moved there since the start of the pandemic.

“In Congress, I’ll go after rich outsiders driving up costs,” she said in a voiceover of a campaign ad showing a private jet and multimillion-dollar mansions. What that really means, she told JI, is “making sure that Montanans have good jobs and wages, that they can afford the cost of living [and] making sure that our small businesses can succeed.”

Neumann, who briefly ran in the Montana Democratic Senate primary in 2020 until former Gov. Steve Bullock entered the race, faces long odds in making it to Washington. She’s running in the newly created 1st District, which covers the western part of the state; it’s the first time the state has had more than a single statewide district in three decades. And while it includes some Democratic strongholds such as the university towns of Bozeman and Missoula, the nonpartisan Cook Political Report has rated it as “Likely Republican.”

“The odds are slightly against her if you look at just the kind of Republican-Democrat stuff, but the candidate quality matters,” said Ed Stafman, rabbi emeritus at Beth Shalom and a Montana state representative. “Montana has a fierce streak of independence.”

Neumann, who is 47, has raised more money than her Democratic competitor, attorney and former Olympian Monica Tranel. But her chief Republican opponent, Ryan Zinke, the former Interior secretary who stepped down during an ethics investigation, has fundraised heavily and earned an endorsement from former President Donald Trump. And like Neumann, the Bozeman-born Zinke is no carpetbagger.

Still, central to Neumann’s pitch is that she understands the experience of locals and their challenges — the rising costs, the difficulty of finding good-paying work, the inability to access quality medical care within a reasonable distance. With a doctorate in international development and a career focus on public health, Neumann argues that her experience in healthcare is a crucial asset at a time when the state is still recovering from the COVID-19 pandemic. Beyond coronavirus, the issue of how to help people access good care is personal.

“The reason I went into public health was because my dad was a logger, and he died from injuries in a lumber mill accident when I was a baby,” Neumann recalled. Her mom became a widow at 21. “The community here in Montana, in Bozeman, raised us. It was a wonderful place to grow up. But what we went through, obviously, it was very traumatic. And if we had been closer to good care, he probably would have survived. So I just had a really early life lesson in the importance of public health and healthcare for rural communities and tribal communities.”

Her father was Jewish, and when he died, Neumann’s mom was committed to raising her and her brother in the faith. But a sense of Jewish community was hard to find in Bozeman at the time. The siblings spent each summer with their grandparents “who fled the Holocaust and ended up in Colorado,” said Neumann. Her grandfather, Alfred Neumann, practiced as an attorney in Vienna, but when he left Europe as a refugee, he trained in social work in New York. He went on to serve as executive director of Jewish Family and Children’s Service of Colorado for nearly three decades.

Neumann’s time with her grandparents sparked an interest in travel and global affairs. They spoke German to each other, and as a teenager Neumann participated in an exchange program to Germany and later studied at Oxford, where she earned her doctorate.

“I was raised with stories of geopolitical [importance] — of war, really understanding the power and the importance of leadership,” she explained. “That’s probably where that interest came from,  just the stories I heard growing up and the sense that I had of the importance of having really good leaders who are committed to democracy.”

That fundamental belief in democracy colors her approach to Israel. “I think it’s really important that we continue to strengthen and promote the democratic ideals that we share between the U.S. and Israel,” Neumann told JI. “I support the very strong, ongoing relationship and bipartisan relationship that the U.S. has with Israel.” She called for the U.S. to support Israel and the Palestinian Authority “in their work toward a two-state solution,” and also expressed support for Abraham Accords and the “growing, improving relations in the region, which is great for everyone.”

Neumann pledged to support the Biden administration’s quest to reenter the Joint Comprehensive Plan of Action “and make sure that Iran does not reach the capability of producing nuclear weapons.”

Early in her career, Neumann worked briefly in the Jewish professional world before earning her graduate degrees, first as a reporter at the New Mexico Jewish Link and then as a communications professional at the American Jewish Committee.

“I felt really connected to the Jewish side of my family, and I was really interested in learning and working with an organization that works globally, and then learning more about Israel and about international relations in general,” she said. Neumann has traveled to Israel twice with the Charles and Lynn Schusterman Foundation’s REALITY trips to the country.

“She came [to AJC] with a deep interest in global affairs,” the AJC’s director of media relations, Kenneth Bandler, told JI. Neumann was Bandler’s first hire after he started at the organization in the late 1990s. Bandler remembers her helping to organize a relief concert after a massive earthquake struck Turkey in 1999. The event, organized with the Turkish and Israeli consulates in New York, featured bands from both Turkey and Israel. “She had a very positive outlook,” he said.

While working on her doctorate, Neumann got on-the-ground experience at the intersection of global health and international development. She spent time doing research on the Thai-Burma border, and she later served as a senior advisor to the State Department’s Global Women’s Business Initiative, a program started by then-Secretary of State Hillary Clinton. Neumann also developed the Global First Ladies Alliance, which worked with the wives of leaders around the world to help them develop and implement their own priorities. “Nobody ever asked them what their opinion was, necessarily. They have never been treated with respect, to be honest, fully,” said Neumann, who helped create the program that convened first ladies to discuss how to make an impact.

Her interest in topics like women’s empowerment and equitable healthcare wasn’t politics but a sense of justice. “I was the kid on the playground who would get mad at the bullies,” she said. Later, in the course of getting her degrees, she worked with “rural communities, tribal communities, displaced populations, and witnessed just huge amounts of need,” Neumann said.

Living in Washington, D.C., it took years before Neumann and her husband, who grew up in Hungary and Germany, could both find opportunities back in Montana in their chosen fields. “My entire generation, the majority of us had to leave for work or school,” she said. “Being able to stay in Montana your whole life is often a privilege.”

The couple moved to Bozeman in 2015, when Neumann started a nonprofit that built coalitions with Native communities, conservationists, hunters and ranchers to preserve public lands. During the COVID-19 pandemic, she put her public health background to use. She had worked on the Ebola virus previously, and she knew a pandemic would be the most devastating for “our rural and remote and tribal communities,” noted Neumann. “That’s my expertise. So I wanted to just put myself to the best use possible to serve our communities during that time.”

The nonprofit she started, We Are Montana, worked with local leaders to bring aid and personal protective equipment to communities in need across the state. “People can have to drive five or six hours to get care. So we were also bringing supplies by plane to some of the communities and just making sure, trying to keep our ear to the ground and respond to the highest need populations in the state,” said Neumann.

Her discussion of public health on the campaign trail has not focused on COVID-19, which she noted will “become endemic.” But she called for a better national reckoning with the toll of the virus, and a stronger response to the mental health crisis that emerged in its wake. “We have, as a country and a world, just gone through a mass trauma event,” she noted. One result, she argued, is that “hate is on the rise in all forms,” and called for a multifaceted approach.

“Between political division and mass trauma and loss, we can’t wait. We need to make sure that people are getting the care they need on one hand, and that we’re protecting those that could be targets,” she noted.

Voters won’t see that political division or partisanship from Neumann. Her TV ads leave out her political party, opting instead for an image of a folksy, no-nonsense Montanan in a fleece-lined vest and a prominent belt buckle.

“I hate political ads, but I love my granddaughter,” her “Noonie” says in one ad, where the two women are chatting over cups of coffee. “Give ‘em hell, babe.”