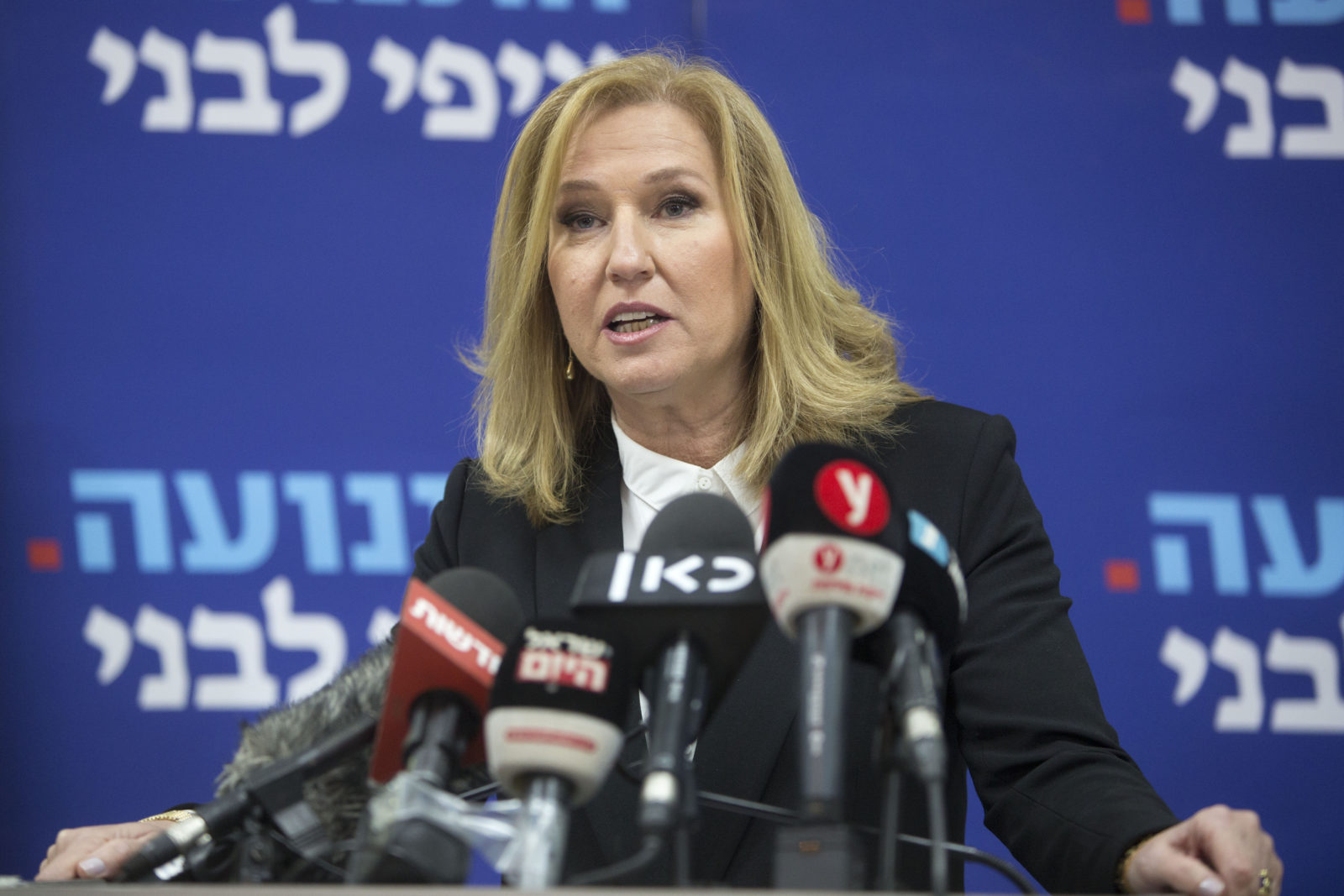 The former Israeli lawmaker, who retired from politics in 2019, held a variety of positions in the government between 2001-2014

Long before “Hatikvah,” Israel’s national anthem, played openly in Abu Dhabi or Manama, long before Israeli military jets took part in training exercises with Gulf countries, and long before normalization agreements were signed at the White House, there was one Israeli leader engaging in quiet, and very secret, diplomacy with the Arab world: Tzipi Livni.

Livni, 63, who served in a variety of Israeli government positions, including deputy prime minister, foreign minister and justice minister, between 2001 and 2014, also led the country through several rounds of peace negotiations with the Palestinians. It was this role – where she worked opposite the Palestinian Authority’s chief negotiator, the late Saeb Erekat – that led her to forge warm ties with multiple Arab leaders, some of whom are now at the forefront of the Abraham Accords, the U.S.-mediated normalization agreements between Israel and four Arab countries.

In a recent interview with Jewish Insider, the former Israeli lawmaker downplayed more than a decade of covert meetings and conversations with country leaders, foreign ministers and other representatives of the Emirates, Bahrain, Qatar, even Saudi Arabia. And while former President Donald Trump’s son-in-law and senior advisor Jared Kushner has twice been nominated for a Nobel Peace Prize as one of the architects of the Abraham Accords, it is possible that this entire process might not have happened if not for the groundwork laid by Livni.

“Truthfully, I didn’t think that Kushner could do this; it’s really a huge achievement. I mean, to have these agreements without the Palestinians, it really surprised me when I saw the news. It is a real game-changer,” Livni said during the interview at her Tel Aviv home. “[Kushner] deserves all the credit he is getting.”

Today, relations between Israel and the United Arab Emirates, Bahrain and Morocco are out in the open, even flourishing. Just this week, Israeli Prime Minister Naftali Bennett made history as the first Israeli premier to travel to the Gulf state of Bahrain. In January, Israeli President Isaac Herzog proudly met with Abu Dhabi’s Crown Prince Sheikh Mohamed bin Zayed, following similar visits by Bennett and Foreign Minister Yair Lapid to the United Arab Emirates.

Livni said that she was as surprised as anyone when the White House announced the agreements in August 2020, although, she noted, there were some signs of a regional sea change. She recalled two key incidents several months before that momentous announcement, and the subsequent signing of the Accords on the White House lawn in September 2020, that made her realize attitudes were shifting.

“In 2019, not long after I quit politics, I was invited to attend a conference in Bahrain,” Livni said. “It was an international conference, but the event was sponsored by Bahraini officials, and I arrived there openly with an Israeli passport.”

“For the first time ever, I held a public meeting with [Bahrain’s Foreign Minister Khalid bin Ahmed] Al Khalifa, and we even took a photo together,” she continued. “It felt very normal and that was something I was not used to.”

Livni stepped back from the Israeli political scene three years ago, heading shortly after to teach a course in diplomacy at the Harvard Kennedy School in Cambridge, Mass. It was there, at the tail end of 2019, that she once again noticed a shift in attitudes toward Israel in the Arab world. Former Norwegian peace negotiator Terje Larson reached out to her just prior to her return to Israel asking her to join him at an international conference in Abu Dhabi. As Livni waited for a direct flight to the UAE, ground staff called ahead to Abu Dhabi making sure officials there would accept an Israeli passport. The message was that they would.

“At the conference, there were leaders from all over the region, not only those who have now normalized relations with Israel, and we discussed all different matters, including the Israeli-Palestinian peace process,” said Livni, who was invited to join a public panel for the first time ever.

“That was before the Abraham Accords, when the Arab world was still saying it would not normalize ties without Israel first achieving peace with the Palestinians,” she said. “But the atmosphere was different. I was accepted and I sat openly with those whom I had met with in secret before.”

Nides to JI: People-to-people relations will build the Abraham Accords

Livni traces her covert meetings back to the period of the Annapolis Conference more than a decade earlier. It was her Palestinian peace partner, Erekat, who first lobbied Arab leaders on her behalf, urging them to meet with the Israeli leader.

Later, said Livni, Larsen stepped in, inviting her and other regional leaders to gather under the guise of his International Peace Institute (IPI). “The meetings were not public but there were others in the room from Arab countries,” she said, describing how she soon had the phone numbers of numerous Arab ministers and their assistants and began meeting with them regularly, informally, on the sidelines of international gatherings such as the U.N. General Assembly in New York and the Munich Security Conference in Germany.

“For many years I had these discreet meetings,” Livni mused. “And it was clear that if anything was leaked to the media then it would have been the end of these kinds of meetings, so I kept it completely secret.”

Among the meetings and relationships forged, Livni describes a 2008 visit to Qatar, for the Doha Forum on Democracy, Development, and Free Trade. Her appearance at the conference was made public, but while in Qatar she attended a more private dinner at the home of the country’s emir, Sheikh Hamad bin Khalifa Al Thani. There she met with the foreign ministers of Oman and other Arab states, as well and held a heated exchange with Turkish President Recep Tayyip Erdogan.

“We discussed Gaza, Hamas and what needs to be done,” said Livni of her meeting with the Turkish leader, whose attitude toward Israel shifted in the subsequent years. Two years later, Erdogan would expel Israeli diplomats following the Mavi Marmara flotilla incident. With the other Arab leaders at the Doha dinner, Livni said, “we discussed the situation in the region, the mutual threats, what was happening in Israel, with the Israeli-Palestinian peace process, and I was really impressed with how familiar they all were with Israel and Israeli politics.”

“It’s clear that this opened the door, it was the first understanding that we have mutual regional interests and there was the possibility to have a direct line, discreetly, to speak about these issues,” she continued. “There were also other lines [between the countries] but they were mostly on security. I was speaking with them on broader challenges.”

Throughout a decade of such meetings, Livni told JI that it was always made clear to her that normalization with the wider Middle East region – 55 Muslim and Arab states – would only come after Israelis and Palestinians made peace. For the Palestinians, she said, this backing was their main leverage.

However, she described a conversation with Erekat in 2014, during the last serious round of peace negotiations facilitated by then-Secretary of State John Kerry, after Palestinian President Mahmoud Abbas refused to respond to the deal being offered. “I told him, ‘Listen, this is the time to make a decision because the Arab world cannot just stay waiting for you like this,’” Livni said she warned him. Six years later, the normalization agreements were signed between Israel, the UAE and Bahrain, catching the Palestinians off-guard.

“Frankly, I was really happy when the Abraham Accords were signed and I am hoping that more countries will join, but when it comes to the Israeli-Palestinian conflict, we are now on a slippery slope towards a one-state reality,” she theorized.

The general who coined the Abraham Accords

While there is a possibility that the normalization agreements could make peace with the Palestinians more likely, Livni cautioned that the Accords are more likely to cause apathy on both sides. The process, she explained, has been used to sell the concept of “peace for peace” to the Israeli people. Now, she explained, that some will say, “‘What is the use of having peace with the Palestinians? We don’t need it.’ I am really worried about that.”

And Livni added, she believes it is unlikely that a U.S. administration will initiate another attempt to bring about peace or even that Israeli or Palestinian leaders would respond to such a gesture.

“In Israel, we have a government whose guidelines are not to touch this sensitive issue,” she pointed out. Even though her days as the country’s peace negotiator are now over and attitudes have clearly changed in the region, Livni said she has not given up on her vision for peace with the Palestinians.

“I believe peace is crucial for the future of Israel,” she said.