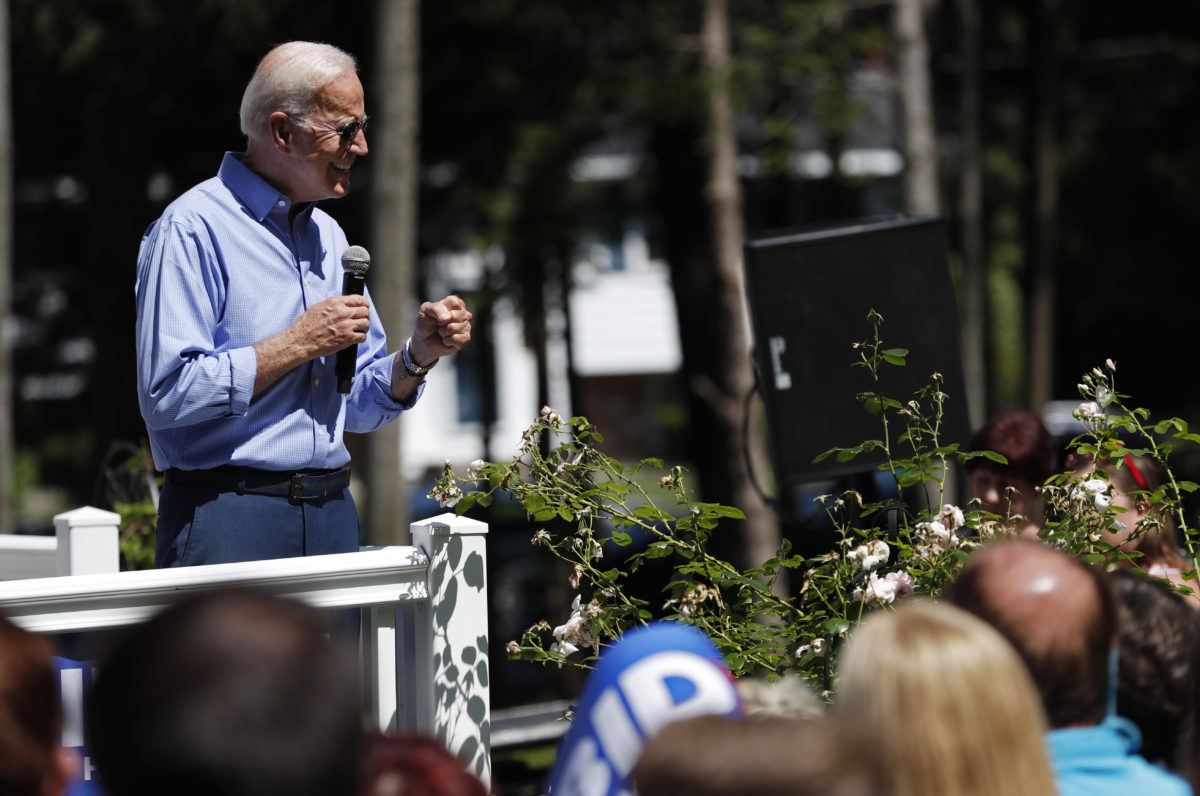 Biden was asked about the Israeli ‘occupation’ by an IfNotNow activist — identified as Elias Newman — during a campaign event in Atkinson, New Hampshire.

“I think occupation is a real problem, a significant problem,” Biden replied. “I think the settlements are unnecessary. The only answer is a two-state solution, number one. Number two: the Palestinians have to step up to stop the hate. So, it’s a two-way street.”

Asked if he would pressure Israel to end the occupation, the 2020 presidential candidate said: “You know anything about my record? You know I have.”

Read the full exchange below:

Elias Newman: I’m an American Jew, who is very concerned about what Netanyahu’s government is doing to Palestinians currently.

Joe Biden: “There’s no answer but a two-state solution.”

Newman: I am wondering if you think that the occupation is a human rights crisis, and if you’ll pressure Israel when you’re president?

Biden: “The answer is, I think the settlements are unnecessary. Here is the deal. The only answer is a two-state solution, number one. Number two: the Palestinians have to step up too to stop the hate. So, it’s a two-way street.”

Newman: Do you believe the occupation is a human rights crisis?

Biden: “I think occupation is a real problem, a significant problem”.

Newman: And will you pressure Israel to end the occupation as president?

Biden: “The answer is, you know anything about my record? You know I have.”

While greeting supporters, Biden also got into a heated debate with another IfNotNow activist over Israel. “As the heated discussion dragged on, Biden raised his finger at the woman, moved his face within inches of hers and slid off his thin-rimmed aviators,” the Concord Monitor reported. “I felt that he was trying to intimidate me,” the activist, identified as Sarah Kate Feferman, told the publication. “That, in combination with hearing him use the same talking point… it’s so disheartening.”

At a town hall meeting in Laconia, New Hampshire, South Bend Mayor Pete Buttigieg told another activist that, “The occupation has to end.”

Buttigieg pointed to comments previously made by former Israeli Prime Minister Ariel Sharon about the occupation in the West Bank. “Even people… associated with the Israeli right… like Sharon — towards the end of his life — recognize that this state of affairs is unsustainable. And the pathway to peace has to include Israelis and Palestinians living side by side with self-determination, and that is the right answer for our own security interest — in a stable Middle East — as well as for an Israeli future that is Jewish and democratic, and for the future of the Palestinian people.”

Buttigieg added: “There is, I think, frankly a healthier discussion happening among the American Jewish community today than there has been in some time, and frankly a healthier discussion in the American Jewish community than there is in the American Congress right now. But what we are starting to see is the awareness that in the same way that you can be pro-America without that meaning you have got to support our president. You can care about Israel’s future and believe in the U.S. relationship and alliance with Israel without being on board with right-wing policies by the Netanyahu government, which is now walking away from peace in a way that I think will harm the Israeli people, the Palestinian people, and in the long run, the American people. So I believe that as the most important ally that Israel has we need to do what you do when you have a friend who is doing something you think is harmful — put your arm around your friend and try to guide them into a better place.”