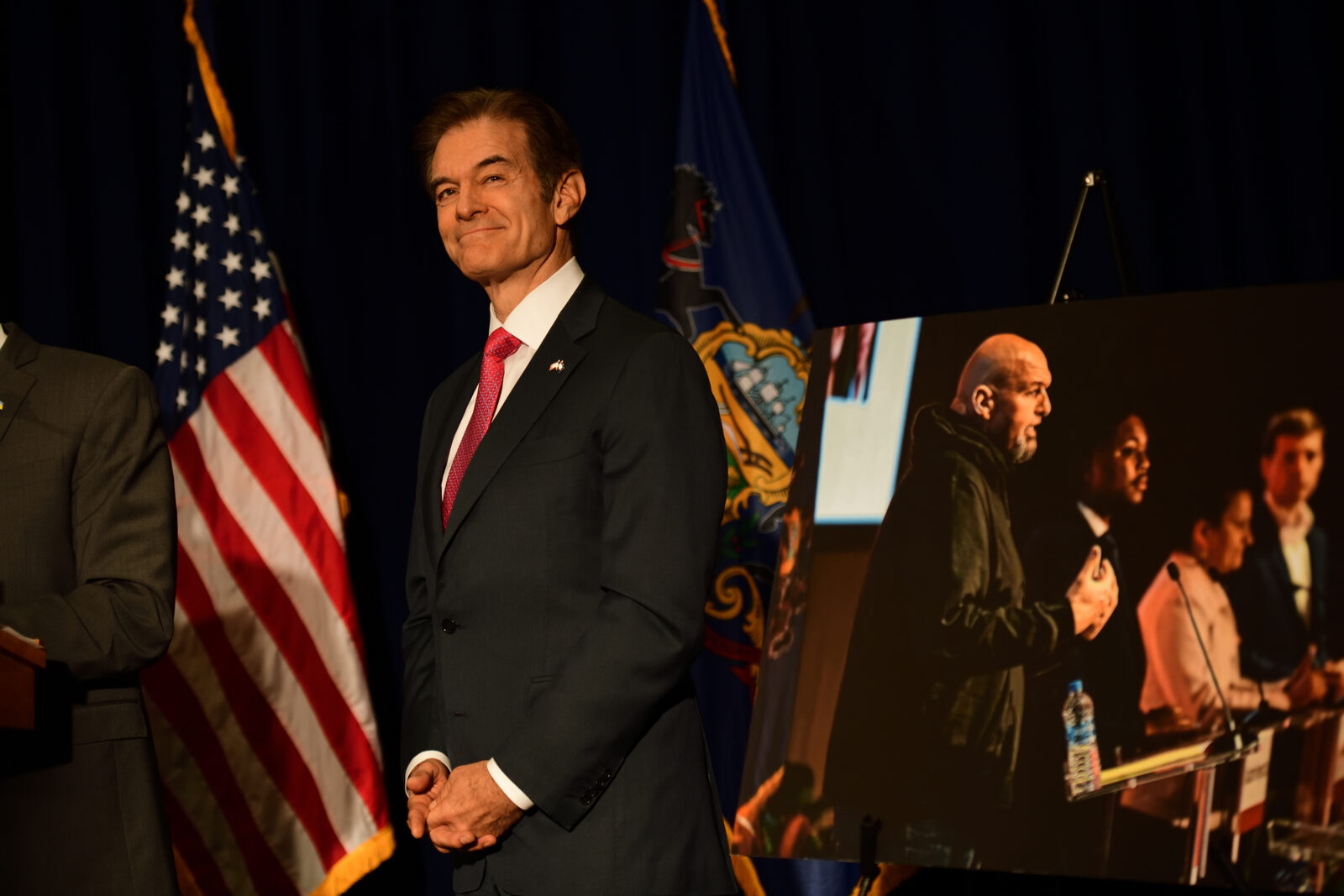 For many Pennsylvania Jewish Republicans, yes to Oz and no to Mastriano

Some Jewish voters in the state are expressing reluctance to vote for the GOP gubernatorial nominee, citing his associations with far-right figures and comparisons to the Holocaust

As one of the country’s deepest purple states, every vote counts in Pennsylvania, and candidates know it. Joe Biden beat Donald Trump by just over 1 percentage point in 2020, and four years earlier, Trump bested Hillary Clinton by less than a point.

And in a state with the nation’s fifth-largest Jewish population — a total that represents 3% of the state’s electorate — every Jewish vote counts too. In two key races in the state — an open Senate seat and the battle for the governor’s mansion — Jewish Republicans are straddling party lines, their loyalties tested. They appear to be unifying around Dr. Mehmet Oz, the prominent talk show host and the party’s Senate nominee. But they also appear to be leaving gubernatorial nominee Doug Mastriano behind, several Jewish Pennsylvanians told Jewish Insider.

“I think that Mastriano’s support in the Jewish Republican community isn’t zero, but it’s about as low as it — it’s pretty low,” said Jon Tucker, a Pittsburgh orthopedic surgeon who switched his party registration from Democrat to Republican in 2015. “Of all the people that I know, I mean, I probably only know one person who’s gonna vote for Mastriano, but he’s also an election denier and conspiracy theorist.”

Tucker, who went to medical school with Oz, was touching on some of the many controversies that have embroiled Mastriano’s campaign. The Pennsylvania state senator has come under fire for his presence at the Capitol grounds on Jan. 6, 2021, his support for election fraud conspiracies and his association with Andrew Torba, the founder of Gab, a social-media platform preferred by antisemites. Tucker called Mastriano’s association with Gab “a window into how he thinks, which is very rigidly right-wing, with not just Christian overtones, but religion before government and that’s antithetical to everything this country’s about.”

Mastriano’s critics have called him a “Christian nationalist,” a term he has not personally used. But he does speak often about Christianity and what he views as its important place in America, and the role of God in national affairs. At his campaign launch event last year, Mastriano appeared with a pastor dressed in a Jewish prayer shawl who blew the shofar. He also has a yearslong history of invoking the Holocaust when talking about his political opponents and policies with which he disagrees.

“No Jew can pull the lever for Doug Mastriano. I don’t know how any Jew could look themselves in the mirror and think that that’s a good vote,” said Steve Rosenberg, a self-described conservative who until recently was an executive at the Jewish Federation of Greater Philadelphia.

Mastriano is competing against Josh Shapiro, the state’s Democratic attorney general, who has made his Jewish identity central to his campaign and is banking on the support of Republicans to defeat his GOP opponent. In recent weeks, he has rolled out endorsements from prominent Pennsylvania Republicans, including former U.S. Reps. Charlie Dent and Jim Greenwood, and from unions such as the Philadelphia Fraternal Order of Police, which usually supports Republicans. (It also endorsed Oz.) Shapiro’s supporters like to point out that he earned more votes in the state in 2020 than Biden did.

“I think you’re going to have Republicans voting for [Shapiro] because they can’t bring themselves to vote for Mastriano,” said Jill Zipin, the co-founder of a group called Democratic Jewish Outreach Pennsylvania that is campaigning for Shapiro and John Fetterman, the state’s Democratic lieutenant governor who is challenging Oz. Roughly 70% of U.S. Jews support the Democratic Party, polling has consistently shown.

“I think among some Republicans who find Mastriano repugnant, the same Republicans don’t attach that same level of repugnancy to Oz. They just view him more as, like, a Toomey, if you want to call it, Republican,” said Zipin, referring to Sen. Pat Toomey, the state’s Republican senator who is not seeking reelection this year and whose views skew more moderate than Mastriano’s.

Public-opinion polling in Pennsylvania shows Oz performing better than Mastriano, although both candidates are currently polling below their Democratic counterparts. According to FiveThirtyEight’s average of recent polls, Shapiro holds a 10-point lead over Mastriano. In the Senate race, Fetterman holds a six-point lead over Oz, but the margin between the two has narrowed in recent weeks. Both Oz and Mastriano have been endorsed by Trump.

Oz has “done two things” since the state’s May primary to shore up support, said Berwood Yost, director of the Center for Opinion Research at Franklin & Marshall College, which has conducted polling in both races. “One is consolidated Republican support. Our last poll showed far more Republicans supporting him now than did in August.” The other, Yost added, is that Oz has “also made an effort to moderate his stance.”

In September, Oz said he would have voted to certify Pennsylvania’s electors in 2020, and that while he is “strongly pro-life,” he would support abortion in cases of rape, incest or to protect the life of the mother. Mastriano said in 2019 that he supported a so-called “heartbeat bill” that would ban abortion after a fetus’s heartbeat was detected, as early as six weeks, with no exceptions. When asked whether women who obtained an abortion at 10 weeks should be charged with murder, he said yes.

“Abortion is required [in Judaism] if it’s a threat to the life of a mother. It’s required. So a Jewish person that takes Jewish law seriously, halacha seriously, you really can’t vote for him. Jews believe all kinds of things on abortion, but certainly he’s well beyond the pale,” said Lou Weiss, a pro-Israel activist in Pittsburgh who usually votes Republican. This year he has a Josh Shapiro sign on his lawn. “I consider myself a conservative and a Republican, but there’s no way I can vote for [Mastriano]. I mean, just really off the charts, with the kind of stuff he’s saying.”

The Republican Jewish Coalition has declined to endorse Mastriano, and in July, the group’s executive director, Matt Brooks, said Mastriano’s campaign “unfortunately seems intent on sending a message of exclusion. Jewish voters expect candidates to condemn antisemitism whether it comes from the far left or the far right — and to shun those who espouse it.”

“There will be A LOT of Shapiro/Oz ticket splitting votes,” Brooks tweeted last month. The RJC has gone all-in for Oz; in August, the group hosted an event in which Oz appeared next to Trump–appointed U.S. ambassador to Israel David Friedman. Earlier this week, the organization’s affiliated super PAC announced a $1.5 million television ad buy that will target Black voters in Pittsburgh and Philadelphia with an anti-Fetterman message. The advertisements target Fetterman for a 2013 incident — for which he received significant criticism from Democrats in the Senate primary — in which he pulled out a shotgun to stop and detain an unarmed Black jogger. Fetterman was the mayor of Braddock, Pa., outside of Pittsburgh, at the time.

Fetterman has struggled in recent months since suffering a stroke in May, just before the general election campaign kicked off.

In July, he addressed Democratic Jewish Outreach in Pennsylvania, and attendees “could see the effects of the stroke,” said Zipin. She saw him speak again about a week ago. “He was much better than he was in July. He was able to use humor effectively, he was able to make his points effectively,” noted Zipin, who said he seems to be at “95%.”

Yost, the pollster, observed that Fetterman “just hasn’t been able to spend time doing rallies and meetings and all the kinds of things that he was doing before the stroke,” but suggested that his slowed-down campaigning has likely not led to Fetterman losing support. “Most of the changes that we’ve seen in the race since August hasn’t been Fetterman losing support. It’s been Oz accumulating support among Republicans,” Yost added.

“Fetterman at this point is going to need Josh Shapiro to have enough of a margin over Mastriano that he can pull Fetterman over the finish line,” said Larry Ceisler, a Philadelphia Democrat who runs a public affairs firm.

For Jewish voters, Shapiro is a familiar figure, even to Republicans. Jeff Bartos, a prominent Pennsylvania Republican, is co-chairing Oz’s Senate campaign, but his wife Sheryl recently hosted a fundraiser for Shapiro. The Shapiros’ children and the Bartoses’ children both attend or have attended Jack M. Barrack Hebrew Academy in Bryn Mawr, Pa., where Shapiro also went as a child (when it was called Akiba Hebrew Academy) — a school that Mastriano recently attacked as “one of the most privileged schools in the nation.” Mastriano characterized Shapiro sending his children there as an example of “him having disdain for people like us.”

The comment prompted CNN anchor Jake Tapper, also an Akiba graduate, to criticize Mastriano. “I don’t think I have ever heard Mr. Mastriano describe any other Pennsylvania parochial schools in that way, elite, exclusive, privileged, full of disdain for fellow Americans. Philadelphia has a ton of fancy prep schools, but Akiba Hebrew Academy was not one of them,” said Tapper.