the doctor is in

The GOP Senate nominee expressed support for maximal ‘autonomy’ for Israel to do as it sees fit without U.S. pressure 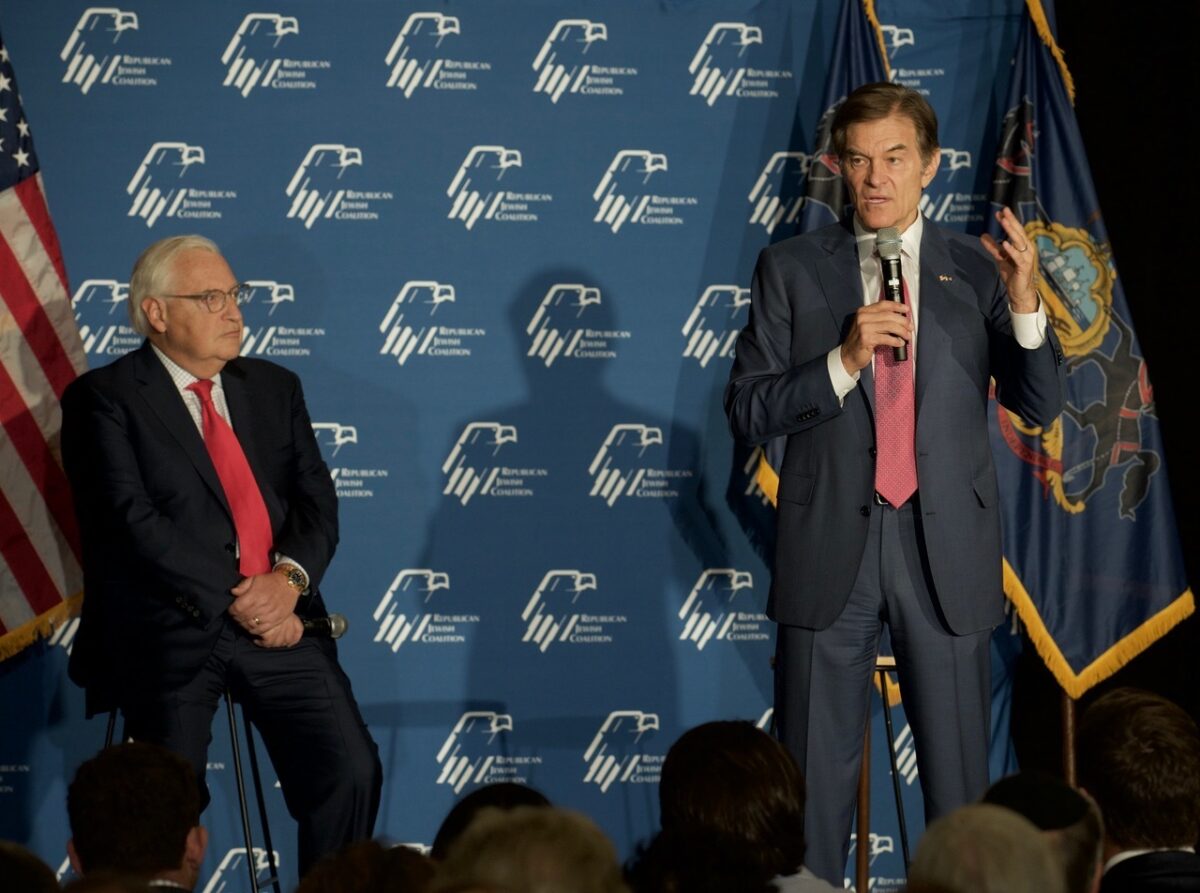 In remarks to the audience, Oz analogized his approach to Israel policy — allowing Israel to manage its affairs, particularly toward the Palestinians, as it sees fit without U.S. pressure — to the approach to health that he supported on his long-running television show.

“I believe that people should have autonomy to make the important decisions in their lives, like I do with your personal health,” Oz said. “I think people… should be able to do what they think is best for their countries. And I don’t think… that it helps our nation’s sovereignty for us to interfere with that.”

Oz called Israel a “force for good” that “brings light to the world,” and said that a family trip to Israel had nurtured a “respect” for the country and the Israeli people’s achievements. He specifically said that he “got goosebumps” from visiting the Western Wall, and criticized President Joe Biden for not visiting the site during his trip last month.

“I think it’s a special opportunity to go visit. These are important symbolic moves as well. It signifies that there’s something important here that we’re not just going to let go,” Oz said. “Strong leaders do that, and this is a particularly important time for America to do just that.”

“I believe America benefits tremendously as well when you keep allies like Israel strong and make sure that there’s no questions about where you are on where you are on these issues,” he added.

The Republican Senate candidate appeared at the RJC event alongside former U.S. Ambassador to Israel David Friedman. Friedman, who served as ambassador from 2017-2021, on Wednesday night called a two-state solution an “existential risk” to Israel and expressed support for “the rights of the Jewish people to live anywhere within their biblical homeland.”

During the event, Oz praised Friedman’s “brave moves” in the Trump administration, and said that he does not think Israel should “give up any territory,” garnering applause from the audience.

Oz expressed opposition to aid to the Palestinians, which had been cut by the Trump administration and partly restored by Biden, describing such support as a “virtue signal” and “throw[ing] money at them.”

“It hurts our allies, it shows weakness,” he said.

Oz, who described himself as a “secular Muslim,” credited the global Jewish community in part for the trajectory of his life, explaining that his father’s medical education in Istanbul and eventual emigration to the U.S. was made possible by an influx of Jews fleeing the Holocaust to Turkey.

Throughout the event, Oz sought to cast the Democratic nominee, Lt. Gov. John Fetterman, as hostile to Israel. Oz bashed Fetterman for receiving an endorsement from J Street and intimated — incorrectly — that Fetterman supports conditioning aid to Israel.

“He’s OK with the United States putting pressure on Israel to manage their internal affairs differently, specifically how they manage the Palestinian population within Israel,” Oz claimed. Fetterman explicitly opposed conditioning aid in an interview with Jewish Insider.

Oz also assailed Fetterman’s support for reentering the 2015 Iran nuclear agreement, expressing his own opposition to the deal.

The retired heart surgeon alleged that Fetterman and other progressive Democrats oppose Israel because it is “strong,” accusing them of holding a world view in which “whoever has power is bad because they have power and whoever is weak is good because they’re weak.”

Friedman, who formally endorsed Oz during the event, suggested that the candidate would have a “unique ability” to help expand the Abraham Accords. Jeff Bartos, who ran against Oz in the primary and is Jewish, said in his own remarks that he was struck by the “power that a secular Muslim United States senator could have advocating passionately for the U.S.-Israel relationship.”

Despite recent polling showing Oz trailing Fetterman, RJC Executive Director Matt Brooks told reporters after the event he feels “very confident” Oz “is definitely going to win,” predicting a final margin of “within one or two points either way.”

He said the race is RJC’s top priority in the Senate field, given the group’s concerns about “J Street John Fetterman… who will basically be another Squad member,” but declined to preview the group’s plans.