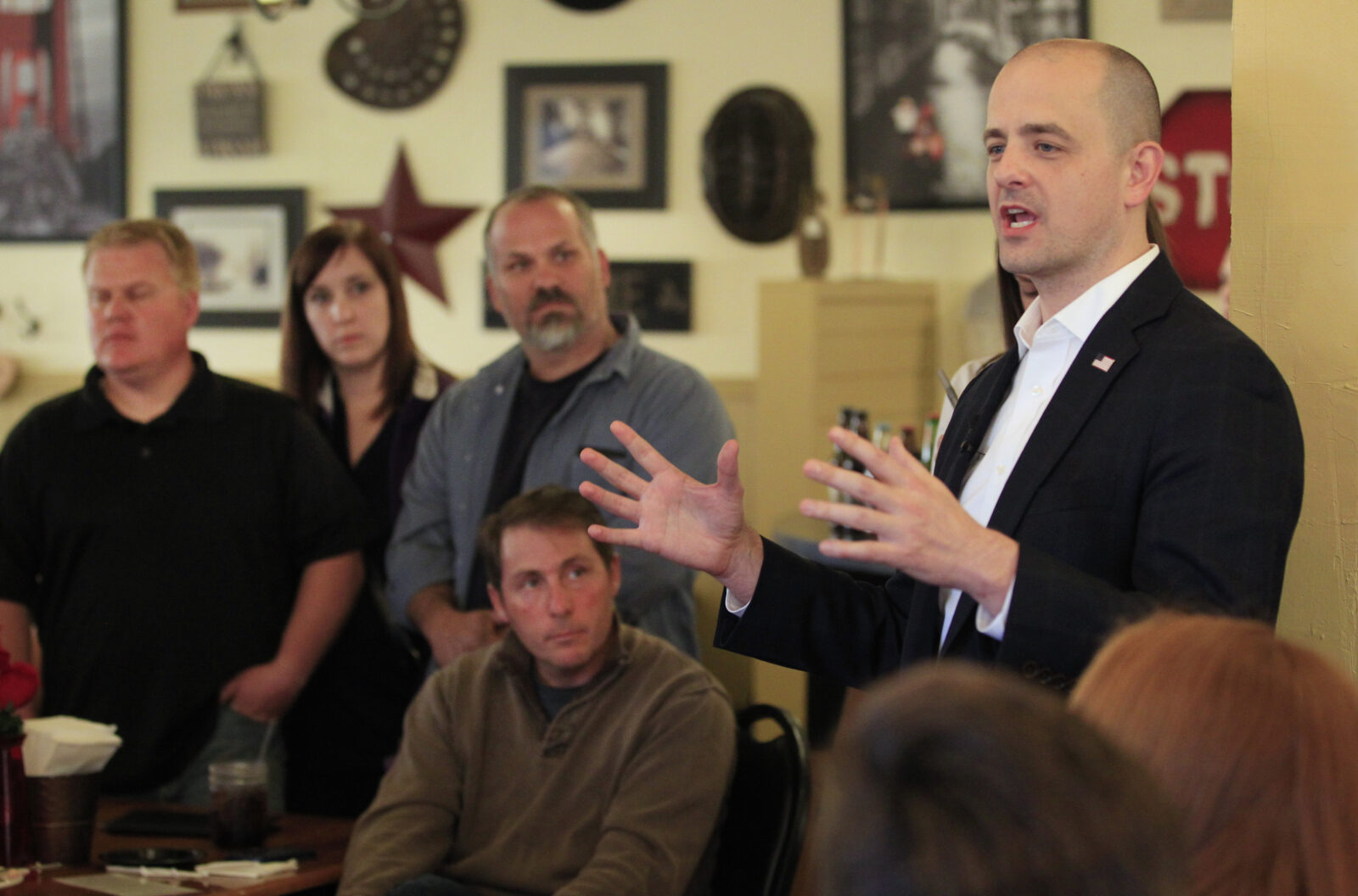 Evan McMullin is a conservative, but he is the Democrats’ pick for Senate in Utah. Running as an independent against incumbent Sen. Mike Lee (R-UT), the former CIA agent’s campaign is focused on threats to democracy in the U.S. In an interview with Jewish Insider on Monday in which he laid out his approach to U.S. policy in the Middle East, McMullin pledged to defend democracy abroad, too.

“I fought against violent extremism overseas and never thought I would see the kind of threats to American democracy that we do now see in America,” said McMullin, who served undercover in the Middle East after 9/11. “It’s absolutely critical that we maintain strong relationships with other democracies overseas. The world is experiencing now, I think, in the absence of American leadership, and recently, a rise in authoritarian regimes that are increasingly hostile and aggressive.”

“I have to agree that more oversight is required for those relationships, and for obvious reasons, so that we ensure that there are basic standards of human rights being met,” McMullin said. “Where there are such violations, I think it should cause reconsideration on our part.”

The Senate hopeful spoke about a need to balance national security needs with American values.

“We have to be realistic, and we have to put the security of our nation and of our allies in the free world first, and that certainly involves, at times, relationships with other countries that are less than ideal at times,” McMullin noted. “But I also think America needs to maintain a very strong voice for human rights, and I think we certainly should have additional scrutiny and oversight of relationships with foreign countries that are not meeting basic standards on human rights.”

McMullin spent 10 years in the CIA before working briefly for Goldman Sachs and then as a national security advisor to the House Committee on Foreign Affairs. He left the Republican Party and ran as a third-party candidate against Donald Trump in 2016, winning 21% of the vote in Utah. One of the most prominent public officials to back McMullin’s long-shot 2016 presidential bid was Lee, who is now an ally of the former president but in 2016 was fiercely critical of Trump as a candidate.

Lee, who is considered a foreign-policy isolationist, has sought to rein in presidential war powers. McMullin appears more eager for diplomatic engagement, but he has also expressed skepticism of presidential actions in the Middle East, particularly when that president was Trump. In 2020, after the Trump administration authorized a strike that killed Qassem Soleimani, head of the Quds Force of the Islamic Revolutionary Guard Corps, McMullin wrote a series of tweets criticizing the move. “No reasonable person is shedding a tear for Soliemani or Iran,” McMullin wrote at the time. “We question whether this unwell, self-serving president used good judgment and obeyed the law in launching an escalatory act of war.”

On certain issues, like abortion, the pro-life McMullin finds himself more closely aligned with Republicans. But he diverges from his former allies on some foreign policy matters.

McMullin, unlike congressional Republicans, said he is open-minded about nuclear negotiations with Iran. “I’m glad negotiations are happening again,” he said. McMullin opposed the 2015 Joint Comprehensive Plan of Action, arguing that it failed to keep Iran’s malign regional activities in check.

“I thought that we had more leverage than we used in that negotiation, and I was just disappointed it didn’t include anything to limit or stop Iran’s relatively unchecked support for terrorist organizations around the region and around the world, and also, it didn’t include anything on Iran’s development of missile technologies,” said McMullin. But, he added, it was “unwise” for the Trump administration to pull out of the deal in 2018 when “Iran was, by all reports, living up to its part of the deal.”

Since the U.S. unilaterally left the deal four years ago, McMullin noted, “it’s not easier now to strike the kind of deal I would like to see then than it was in 2015, but I’m glad, nevertheless, that an effort is underway and hopefully it will yield something of value.”

After weeks of progress toward a deal last month, nuclear negotiations with Iran are now on pause. But while negotiations were happening, senior officials in the Biden administration noted that the deal being negotiated would only include Iran’s nuclear program, and not other issues like its support for terrorism.

“If the commitment is to work on the terrorism side separately, that’s fine, as long as we truly are making progress on that front,” said McMullin. “What I don’t want to see is us squander any leverage we still have with Tehran in such a way that we aren’t able to negotiate effectively with them on issues related to terrorism as well.”

McMullin also broke with some Republicans by asserting that a two-state solution is the best outcome to the Israeli-Palestinian conflict, a position that has become increasingly uncommon among Republicans who don’t believe the U.S. should determine the outcome of the conflict. “I think a two-state solution offers the best prospects for sustainable peace in the immediate region and for Israel,” said McMullin.

During his undergraduate years at Brigham Young University, McMullin lived in Israel for six months in 2000, when he studied Arabic as a David L. Boren Scholar with the Department of Defense’s National Security Education Program.  “I think Israel plays a stabilizing role in the region, and we have a very important national security relationship with Israel that is indispensable, frankly, not only in the region, but elsewhere.”

In a position paper shared with JI, McMullin vowed to partner with Israel “to thwart Iran’s terrorist activity in the region and elsewhere.” In that same document, he pledged to fight against white nationalism and antisemitism, including “standing with Israel against the BDS movement.”

Recent polling paints a muddled picture of which candidate has the lead. In early September, Lee’s campaign released an internal poll showing the incumbent ahead by 18 points. But a poll from the McMullin campaign showed him leading Lee by one point. An independent poll conducted in July by Deseret News and the Hinckley Institute of Politics showed Lee leading McMullin 41% to 36%. Utah’s other senator, moderate Republican Mitt Romney, has opted not to endorse either candidate.