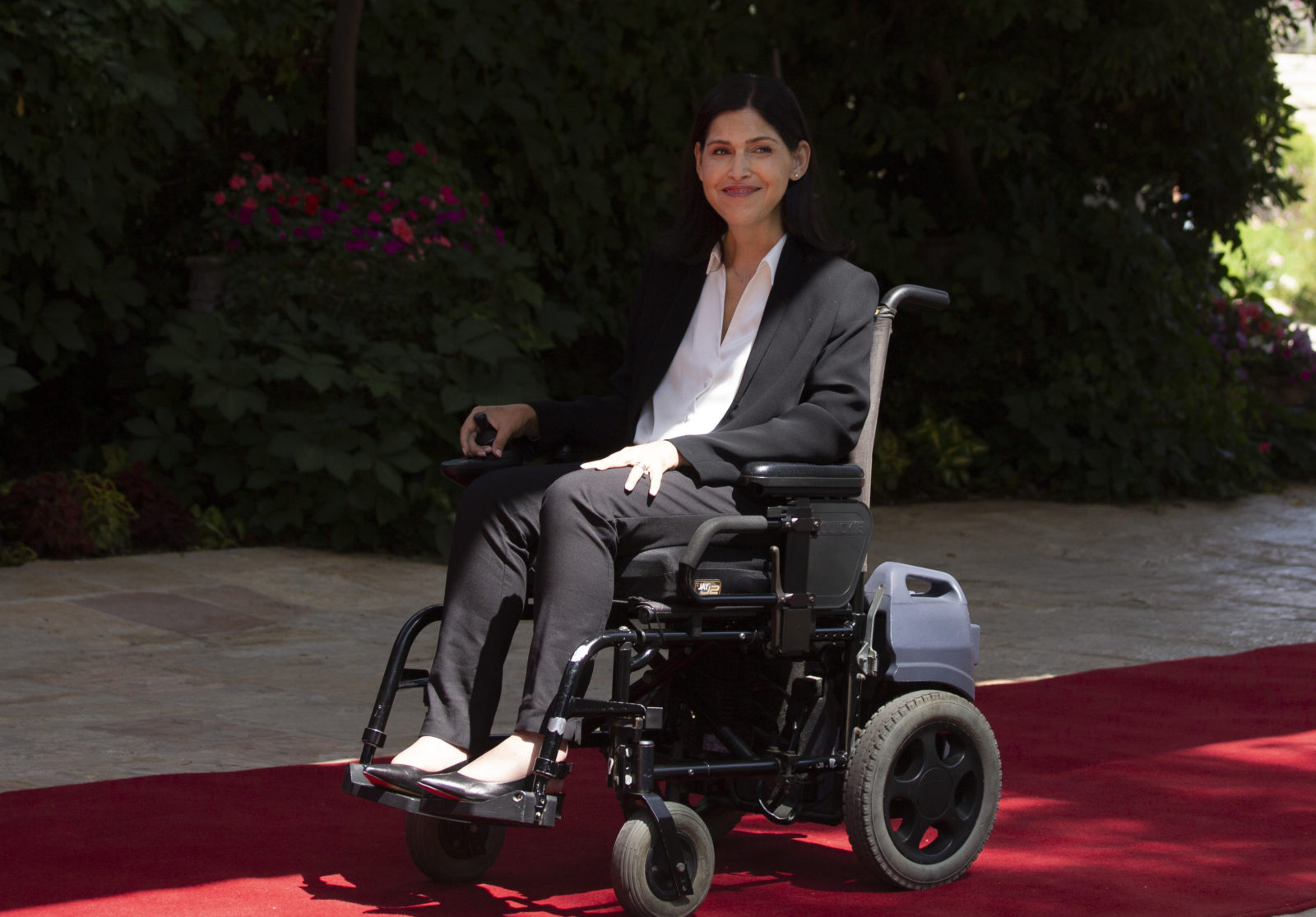 With the pressures of addressing climate change falling to politicians around the world, in Israel it is Karine Elharrar, a relative newcomer to environmental issues, who is feeling the heat.

The 44-year-old minister of national infrastructure, energy and water resources, who earned a reputation for championing social causes in Israel’s Knesset, is determined to figure out a way to have Israel pivot away from fossil fuels.

“From my perspective, Israel’s biggest challenge is in transitioning to green energy,” Elharrar told Jewish Insider in a recent interview, referring to the climate crisis. “We live in a region that is very reliant on old forms of energy — oil, gas and petroleum — and we need to become a green arrow in this field.”

Less than six months into Israel’s new government, and freshly returned from the United Nation’s COP26 climate summit in Glasgow, Scotland, Elharrar told JI that she has already begun to implement important changes in the country.

“The energy ministry deals with big infrastructure projects and we need to be looking far into the future,” she said. “Every step we take today deals with what will happen in ten years from now.”

But for some local environmental entrepreneurs and green activists the steps are not being taken fast enough. They believe that not enough is being done to challenge the old order and ease Israel’s regulatory burden or move to embrace clean energy practices.

Taking on the planet’s biggest challenges might seem like a surprising career swerve for a politician who, for the last eight years, focused more on matters of education, welfare and health but, when Yesh Atid received this portfolio as part of the coalition deal back in June, Elharrar, who joined the party in 2012, said it was the office that “spoke to me to the most.”

“I wanted something different,” she told JI. “It is an amazing ministry that involves issues of security, geopolitics, foreign policy [and] economics, and I felt it was an amazing opportunity, even though many people do not even know what we do.”

That looks set to change.

And Elharrar, who has muscular dystrophy and uses a wheelchair — and who made international headlines earlier this month after being unable to physically access the summit in Glasgow, Scotland — will be a key player.

“The conference was accessible, the entrance was not,” stated Elharrar in her clear and articulate manner. “They closed the streets around the conference, and were providing shuttles to the entrance, but those were not accessible to wheelchairs.”

Though Elharrar appreciated the security concerns for such a high-level event, “at the end of the day, a minister representing the government of Israel was not able to gain access,” she said.

“If that is how someone at my level is being treated, then just imagine what happens to others,” said Elharrar, who, accompanied by Bennett the next day, was personally welcomed by British Prime Minister Boris Johnson — from whom she received a personal apology.

“This should not have happened,” she said matter-of-factly. “And we need to make sure this kind of thing doesn’t happen again.”

Elharrar applies the same kind of sharp response to dealing with the climate crisis.

“Israel has some amazing innovators with incredible abilities, and we need to take advantage of this,” said Elharrar. “There are so many pioneers who get initial assistance here, but end up leaving for the U.S. or Europe to continue their work. We need to fix this problem and stop them from leaving.”

Elharrar believes Israel must break down bureaucratic barriers that prevent innovators from developing and implementing their work in the country, including access to land, permits and basic resources and create what she described as a “one-stop shop that can help innovators not only invent their ideas in Israel, but also develop and build them here too.”

Yosef Abramowitz, CEO of Energiya Global Capital and a pioneer in Israel’s solar energy sector, told JI that he was a good example of the country’s failure to harness its startup prowess.

“Together with my partners, I created Israel’s first utility-scale solar company and now I only invest in solar fields in Africa, not Israel,” he said. “There is not enough certainty for green energy investors in the Israeli market, mainly because there was no climate leadership under the previous government.”

Abramowitz said he is still waiting to see if the new government will make “any meaningful changes.”

“In Israel, there is a complexity associated with going green,” he said. “There are so many easy, tangible steps the government can take to advance green energy, but they have not yet advanced those steps.”

He explained that resistance was derived mainly from the country’s influential gas companies. “The current political decision is to reinforce the gas monopoly for another generation,” said Abramowitz.

But hopeful that the new government will chart a new course, he added. “Elharrar has the best values of any energy minister from the last 15 years, and we are hoping that those values will lead to real climate leadership.”

Already, Elharrar said she is implementing changes. She told JI that she was in the process of establishing a department for new energy, which did not exist previously. She also spent time in Glasgow meeting with counterparts from around the world to explore options for Israel’s move to cleaner energy. And, she’s excited about the prospects afforded by the normalization agreements Israel signed with the United Arab Emirates, Bahrain, Sudan and Morocco.

“I think the Abraham Accords are an incredible opportunity for Israel,” said Elharrar, who will travel to the Gulf on Nov. 22. “I think our nations are very similar. We are both young countries with a great deal of innovation.”

Yoni Sappir, chairman of Israeli grassroots green movement Home Guardians, said, however, that he has not yet seen too much change between the new and previous energy ministers.

“It seems like she is sticking with the same policies, even though she makes different announcements,” he said of Elharrar. “Israel still has about 200 fossil projects in the pipeline and the new minister has not stopped any of the projects initiated by the previous minister.”

“Israel needs to wake up, including Ms. Elharrar,” Sappir said. “She and her staff do not see the whole picture. They all need to turn the page and initiate a totally different concept for Israel’s energy market.”

Elharrar does appear to understand the urgency, however. Among the many people with whom she met at COP26 was Microsoft co-founder Bill Gates. She told JI that she asked the American businessman, innovator and philanthropist not for money, but for help in designing a new work model for Israel.

“We did not ask for funding; finding money is not the problem,” she said. “What is more important is how to apply that funding in an efficient way.”