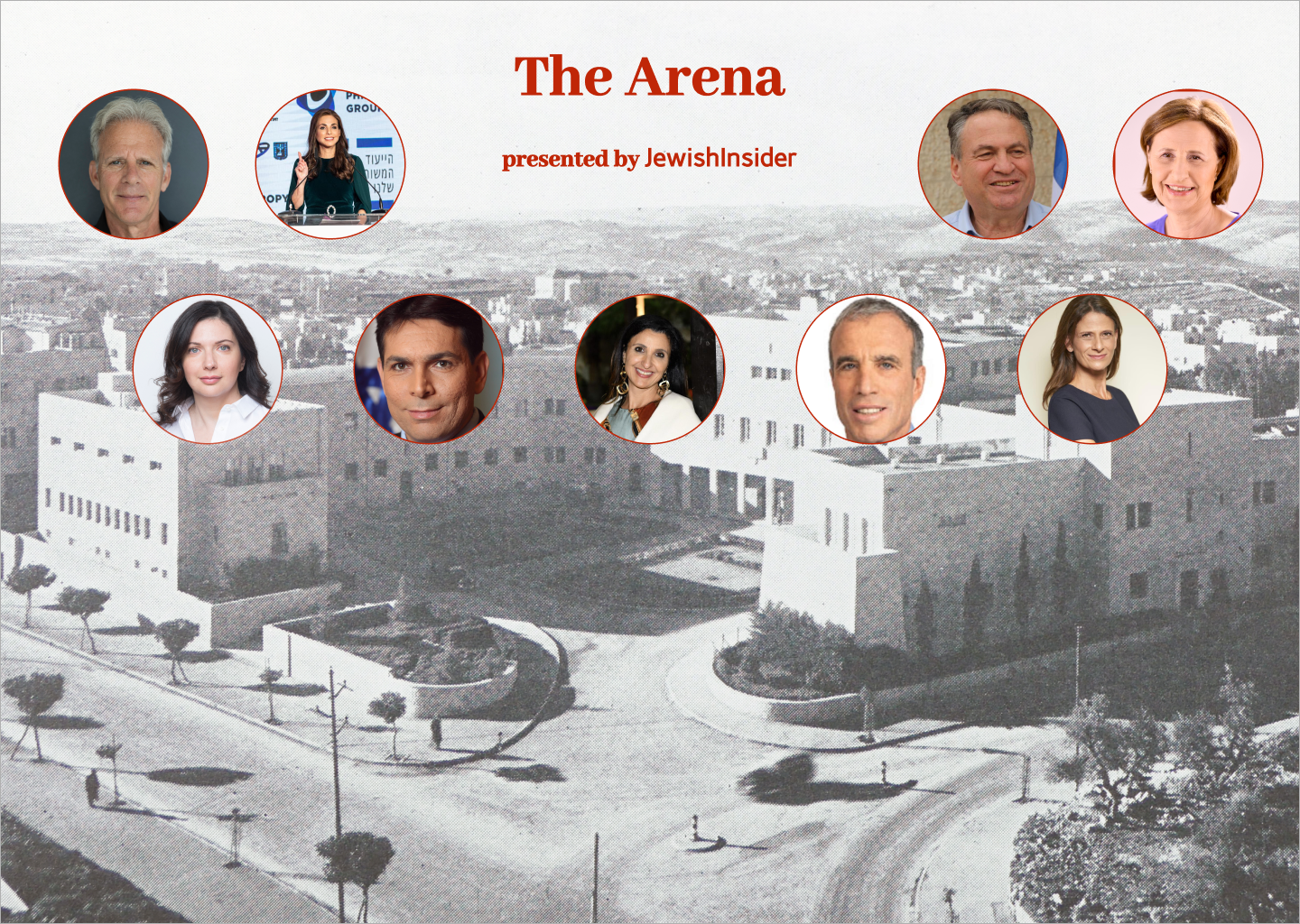 The battle for Jewish Agency head heats up

Race for bridge-builder between Israel and Diaspora is ‘Jewish politics of the highest order.’ JI gets the candidates on the record

October could be a fateful month for the organized Jewish community as the Jewish Agency for Israel (JAFI), the quasi-governmental organization with a budget of nearly $400 million that makes funding decisions on some of the thorniest issues in Jewish life, is slated to select its next executive chairperson. The politically charged race for the sensitive post of bridge-builder between Judaism’s often warring religious and political factions is already heating up.

The previous head, Isaac Herzog, stepped down last July to become Israel’s 11th president, and the battle for his replacement is fierce, with a crowded and competitive field of nine candidates currently in the running. Jewish Insider spoke to each candidate about their vision and why they want to head the 91-year-old agency (see their comments below).

It might also be just as much of a political battle.

Deciding who will lead the agency, which was founded in 1929 with the aim of assisting and encouraging Jews worldwide to help develop and settle Israel, and take on the biggest challenges facing world Jewry today, is a 10-member selection committee representing the three factions that make up JAFI – the World Zionist Organization (WZO), the Jewish Federations of North America (JFNA) and Keren Heyesod.

Headed by Yaakov Hagoel, chairman of the World Zionist Organization and the acting chairman of the Jewish Agency, the committee also includes Harvey Blitz, chairman of the World Mizrachi Movement; WZO’s Racheli Baratz Rix; Helena Glazer, chair of the Zionist General Council and past chair of World WIZO; and Rabbi Meir Azari, executive director of Beit Daniel, a congregation in Tel Aviv affiliated with the Israel Movement of Progressive Judaism (IMPJ); as well as JFNA’s Michael Siegel, Mark Wilf, Jeffrey Schoenfeld; and Steven Lowy and David Koschitzky from Keren Hayesod.

To claim victory, the winning candidate must have the backing of nine out of 10 committee members, who will then make a recommendation to the Jewish Agency’s Board of Trustees at the end of this month when the board is scheduled to hold its annual meeting. If there is no consensus among committee members, the process will roll over into next year. The committee is expected to hold meetings with each contender in the coming weeks.

In the past, the individual backed by the Israeli prime minister stood the best chance of winning the committee’s support, but that changed during the last selection, when Herzog was favored over then-Prime Minister Benjamin Netanyahu’s pick, former government minister Yuval Steinitz.

“This is Jewish politics of the highest order,” observed Jankelowitz. “The Jewish Agency has changed a lot since its inception. It is no longer just about aliyah, but about recognition and acceptance of all the streams of Judaism, as well as unity of the Jewish people in every corner of the globe.”

The post is also about being an effective fundraiser and manager of an often bureaucratic and bloated organization as it addresses the most potent challenges facing world Jewry. Whoever becomes the chairperson will be responsible for a core budget of some $365 million, including vast assets in Israel and abroad, as well as additional sums from the Israeli government for various targeted projects run jointly.

Backed by Israeli Prime Minister Naftali Bennett and Foreign Minister Yair Lapid, Israeli Minister of Intelligence Maj. Gen. (res) Elazar Stern is said to have the best chance of garnering the nine-vote quota, though reports have emerged of some resistance from certain members of the committee, most notably Hagoel. The acting chairman hails from the opposition Likud party and is said to be loyal to another candidate: Israel’s former U.N. Ambassador Danny Danon, who is now chairman of World Likud.

Also considered a top candidate, according to analysts closely watching the race, is Jerusalem’s Deputy Mayor Fleur Hassan Nahum, who has worked hard to boost the city’s image and is known as an effective fundraiser. Former Minister of Diaspora Affairs Omer Yankelevitch, also vying for the position, has the backing of Blue and White party head and Defense Minister Benny Gantz. Former Knesset member and Israel National Security Advisor Maj. Gen. (res) Uzi Dayan, who flew to the U.S. last week to campaign, is supported by Netanyahu.

Non-political candidates include Irina Nevzlin, chair of the board of directors of ANU – The Museum of the Jewish People, formerly known as Beit Hatfutsot; Israel’s former ambassador to the United States Michael Oren; Michal Cotler-Wunsh, another former Blue and White Knesset member; and Bar-Ilan University law professor Yaffa Zilbershats, chairwoman of the Planning and Budgeting Committee of the Council for Higher Education.

In interviews, several candidates stressed the necessity of reaching out to “the next generation,” amid increasingly fraying ties between Israel and the Diaspora community, and especially among younger Jews.

What follows are the candidates, in their own words, discussing their visions for the Jewish world’s top post. (The list is in alphabetical order.)

“The Jewish Agency is the singular most important platform connecting Jews in Israel and throughout the world,” said Cotler-Wunsh, an expert in international law and human rights. “That was what it was founded to be, and remains its mission. Implementing, enhancing and advancing existing plans and programs, it has the ability and responsibility to bridge growing gaps and heal deepening rifts, uniting Jews worldwide.”

“At this tumultuous time, marking nearly a century of leadership, the Jewish Agency’s continued stability is an important asset, enabling it to transcend real or perceived divides — of politics, geography or denomination; to listen to all communities; and to represent their voices in Israel, ensuring the nation-state of the Jewish people, its leaders and general public, recognize and prioritize this relationship.”

“I am honored that my name is being considered for this position. I got to know the Jewish Agency very well when I was an emissary for JAFI in North America and also in my position as chairman of the Committee on Immigration, Absorption and Diaspora Affairs in the Knesset,” said Danon, who previously served as Israel’s ambassador to the United Nations and as a minister in the Israeli government.

“I believe the agency has a significant role in tackling the challenges facing the Jewish people, mainly in connecting the younger generation to Israel and Jewish life. We care a lot about promoting aliyah; at the same time we have to make sure that we bring the next generation of Jews who, according to recent polls and reports, are distancing themselves from Israel and their Jewish identity, into the Jewish life.”

“It is important to do this work in Israel, as well as abroad, to bring the different communities around the world together with Israel and to let Israel take a leading role in promoting Jewish cohesion and unity.”

“I don’t differentiate between Israel and the Diaspora because we are all one family. Once we start with that premise, any disagreement is easier to solve.”

Hassan Nahoum, who made aliyah from Gibraltar and this year co-founded the UAE-Israel Business Council and the Gulf-Israel Women’s Forum, added: “As a former Diaspora Jew and new immigrant, I have a unique perspective. I understand what Diaspora Jews are looking for and what the challenges are for new immigrants to Israel. I am dedicated to helping improve the experience for both, building bridges and improving communication.”

Nevzlin, who immigrated as a child from the Former Soviet Union and authored a book on Jewish identity, said: “Being Jewish is a gift. We share the same roots and there is so much that unites us. I am a product of JAFI’s work, and I see this role as an opportunity to make sure that the Jewish people are united, and together, we can look forward to a shared future.”

“The most important work for anyone who becomes the chair of the executive is to engage the younger generation of Jews, to make sure they feel proud of being Jewish and to make sure they are connected to Israel. I know from my projects in the museum that this is possible to do.”

“The Jewish people are at a crisis point and we stand to lose a large segment of the Jewish people. There is no other organization that has the scope, staff and means to tackle this crisis,” said Oren, an author, historian and former deputy minister in the Israeli government who made aliyah from the United States.

“It is time to reexamine the ways we reach out to Jews in the diaspora with a Zionist message, particularly young Jews. We also need to reinforce the appreciation for aliyah among Israelis, this is a sensitive point and a huge challenge.”

“The Jewish Agency needs to look at the challenges of the Jewish world and needs the synergy to bring them together – this is essential. It is important to think outside the box and to do things that were not thought possible in the past,” said Stern, who headed the IDF’s Manpower Directorate, served as a commander of the IDF Officers Training School, and chief education officer.

“I want people to be proud of their Jewish identity. It is important, in this role, to be a bridge builder between different sectors in Israeli society, and also between Israeli society and the Diaspora,” said Stern, who initiated the army’s Nativ conversion project to assist immigrants from the FSU to convert to Judaism while serving.

“The Jewish Agency plays a critical key role in the alliance between the Jewish state and the Jewish people in the Diaspora,” said Yankelevitch, a lawyer by training who lived in the FSU as a child while her parents served there as emissaries for the State of Israel.

“For me, the issue of world Jewry is my mission, and this was reflected in my tenure at the Ministry of Diaspora Affairs and in the initiatives I led there. I was very involved in the connection between the different populations and communities, in Israel and in the Diaspora, and I think it is very important,” said the former minister, who has been deeply involved in the nonprofit world advocating for marginalized populations, particularly the Haredi sector.

“I think the Jewish Agency has an important role to connect all segments of Jewish people and connect the Jewish people in Israel and to Jews around the world,” said Zilbershats, formerly dean of the Faculty of Law at Bar-Ilan University and deputy president of the university.