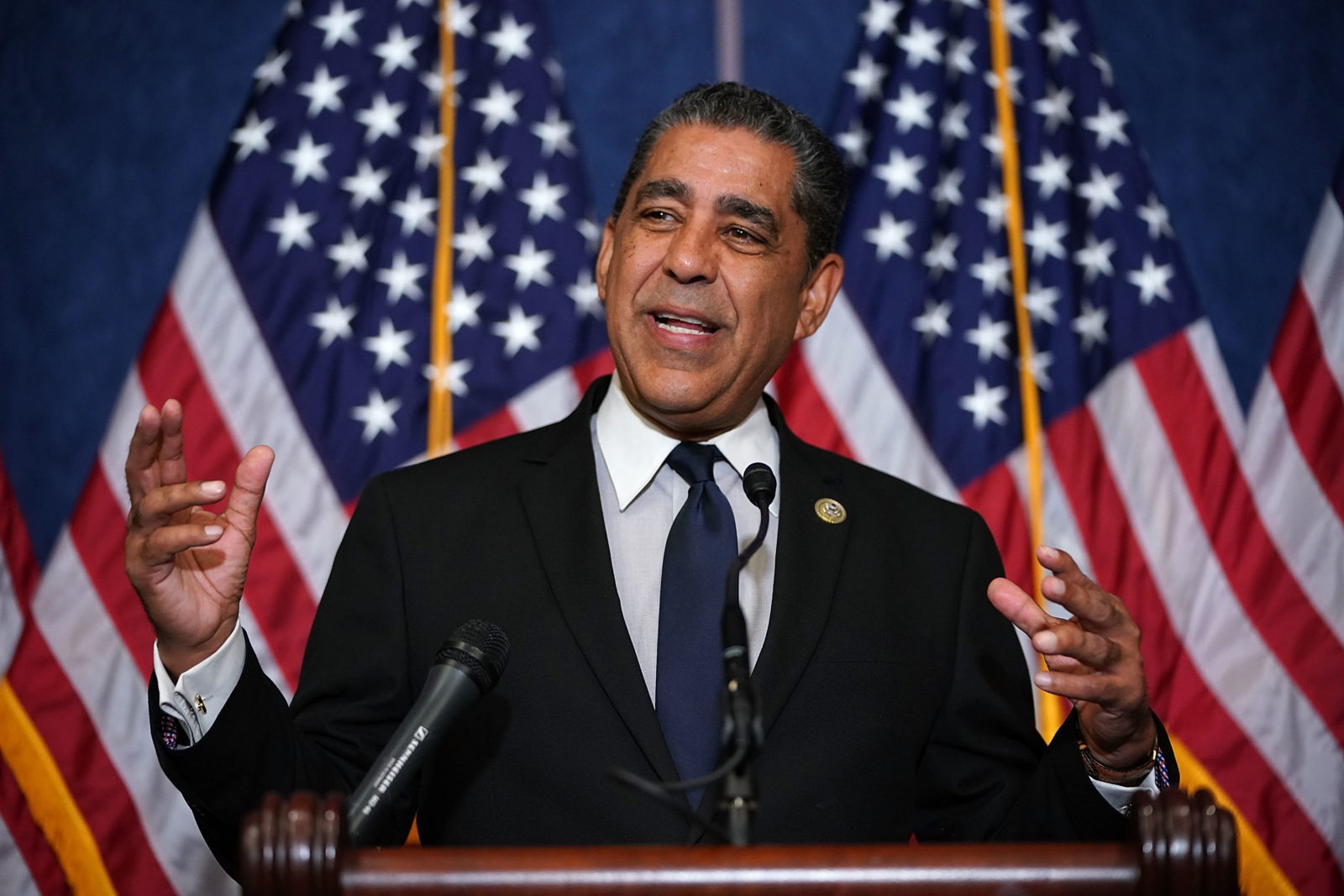 As Rep. Adriano Espaillat (D-NY) sees it, the Jewish and Dominican communities in his diverse Manhattan district have a lot in common. Both are diasporas: The Jewish community keeps close tabs on happenings in Israel, while Dominicans remain closely connected to their Caribbean homeland.

“Both are very family-oriented and religious. Both, of course contribute back home,” said Espaillat, who came to the U.S. from the Dominican Republic as an undocumented immigrant when he was a child. “Of course, they love politics back home, they follow it like a national sport. And as a result, I think because of those similarities, we have been able to build bridges.”

The 13th congressional district, located in New York’s Washington Heights neighborhood, is more than half Hispanic, but it also contains a sizable Jewish population centered around Yeshiva University that developed when German Jewish refugees arrived in the area (which some called “Frankfurt on Hudson”) in the 1930s and 1940s. Members of that community included Henry Kissinger and sex therapist Dr. Ruth Westheimer, who at 92 still lives in the neighborhood. A New York Times report from 2013 found that Washington Heights’ Jewish population had increased by 144% in the previous decade, and Hamilton creator Lin-Manuel Miranda immortalized the neighborhood in his first musical, In the Heights, set to be released as a feature film this summer.

“Back in the ‘90s, when crack was everywhere, and the city was in a tough situation and crime was really rampant in Washington Heights, the Jewish community stayed there, and built bonds and bridges with the Dominican community to push and help reduce crime,” Espaillat noted. The congressman has stayed in the neighborhood for the more than 50 years he has lived in the U.S. “Grew up on 153rd Street, went to 181st, now I live on 215th Street. I’ve been moving up,” he joked.

When he was elected to Congress in 2016, after 20 years in the New York State Assembly and state Senate, Espaillat, 66, joined a high-level effort to create ties between the Jewish and Latino communities. In a recent interview with Jewish Insider, Espaillat said that members of the Latino-Jewish Congressional Caucus, of which he is the co-chair, are the “guardians of that good relationship.” The caucus will soon officially relaunch in the 117th Congress, with co-chairs Reps. Mario Diaz-Balart (R-FL), Debbie Wasserman Schultz (D-FL), and Jaime Herrera Beutler (R-WA).

“Democrats and Republicans were not talking to each other, and [we thought] maybe as Latinos and Jews, they will find another space to establish these connections,” said Dina Siegel Vann, who serves as director of the American Jewish Committee’s Arthur and Rochelle Belfer Institute for Latino and Latin American Affairs and had the initial idea for the caucus.

The caucus’s work includes educating other members of Congress about the culture and history of each community. Vann noted that for Espaillat, a crucial part of that is the story of Sosúa. The coastal Dominican city accepted about 1,000 Jewish refugees from Europe in the 1930s and 1940s, in part because the Dominican dictator Rafael Trujillo wanted to curry international favor after he massacred 25,000 Haitians in 1937.

“It was controversial, because a dictator had opened the doors. But he saved 1,000 Jews,” said Vann, who noted that Espaillat “promoted the issue of Sosúa, the knowledge of Sosúa in American society, as an example, of course, of human solidarity, but also the connections between Latinos and Jews.”

It’s “these kinds of connections,” Espaillat said of Sosúa, that “make both communities work well with each other.”

Another key issue for the caucus is promoting immigration reform, which has failed to progress in Congress in recent years. The members are “trying to ensure that the narrative of this country as a country of immigrants and recognizing the contributions of immigrants to this country,” Vann explained. “That is something very important to the caucus, and that brings both communities together.”

In Espaillat’s experience, coming to the U.S. as an immigrant “shapes you into being someone that’s a little bit more sensitive about others,” and noted that he has worked to reunite immigrant families separated at the southern border. Yet when asked about the migrant surge that occurred in the early days of the Biden administration, resulting in some young people being separated from their families, he blamed Biden’s predecessor. “The Trump administration really left the entire system in shambles,” Espaillat argued.

After the results of the 2020 election showed that former President Donald Trump made inroads with Latino voters, Democrats have focused on outreach to those communities. Espaillat cautioned that the Latino community is “very diverse within itself, so it requires a special type of messaging.”

Republicans have also seen the political expediency of winning over Latino voters — and Espaillat admits they’re doing a good job. “I think the other side of the aisle has done a far better job of reaching out to what should be, to us, a very accepting constituency, one that probably should embrace us because of values that we have as a party,” he explained.

In New York, Republicans are looking to expand their base by capitalizing on Gov. Andrew Cuomo’s recent scandals, including alleged instances of sexual harassment and reports that his administration covered up information about COVID-19 nursing home deaths. Espaillat called for Cuomo to resign in March, along with nearly all of New York’s congressional delegation. He would not say whether he believes Democrats should put forth another candidate to challenge Cuomo if he seeks a fourth term in 2022.

Espaillat also recently walked back his endorsement of Scott Stringer, a New York City mayoral candidate accused of sexual impropriety by a former campaign volunteer. A spokesperson for Espaillat told JI that he would not comment further on the topic.

In Washington Heights, the congressman’s work bridging divides between Jewish and Latino communities has put him in a unique spot amid the city’s changing politics.

In recent years, the Democratic Socialists of America has exercised its growing clout in city politics by urging candidates in New York to condemn Israel and pledge not to travel to the Jewish state. “I haven’t felt any pressure” from the DSA, said Espaillat, a member of the Congressional Progressive Caucus. But, he pointed out, he is not an outsider to the group: “One of my mentors in college was Michael Harrington, who was the founder of that movement,” Espaillat explained. “I know the philosophy and the backbone of that movement, much of which I agree with, but I don’t think that being there and supporting Israel, or being against war and nuclear armaments — I don’t think that that’s mutually exclusive. I think you can be both.”

Espaillat “understands the importance of maintaining strong ties between the Hispanic and Jewish communities, and he does know that those two categories are not mutually exclusive,” said former Rep. Ileana Ros-Lehtinen (R-FL), who was one of the Latino-Jewish Congressional Caucus’s original co-chairs when it was created in 2011. “From his first days in Congress and even before, he refused to let groups drive a wedge between our two communities.”

“We all know that the DSA has their questionnaire for the New York City Council,” Miller told JI. “They ask two questions: ‘Do you support BDS and if not, why not?’ And the other is, ‘Would you pledge not to travel to Israel on a trip such as the trip that the JCRC takes?’ And I think that these trips are really crucial. You could hear it from everybody who’s ever traveled on these trips or wants to travel on these trips, how much they want to see Israel with their own eyes, and not just to be educated about Israel through the media or through affinity groups, through advocacy groups.”

Espaillat said his strongest memory from his trip to the region was the constant stress of the looming possibility of violence. “That is so intense, to wake up and live every day and go to school and go to work and do the things that you have to do with this tense feeling around you that anything could happen at any time. It’s very stressful,” he noted. “The Jewish people are very resilient. They do a great job under very adverse conditions, and I’m a strong supporter of Israel.”

Espaillat was not in Congress in 2015 when the body voted on the nuclear agreement with Iran, but he said he is urging the Biden administration to renegotiate certain aspects of the Joint Comprehensive Plan of Action. “I also think that this is a great opportunity to strengthen the previous agreement and to include any elements or provisions that were not included the first time,” Espaillat said. “The ballistic missile piece is one, and financing terrorist groups is another.”

Unlike other members of the Progressive Caucus, Espaillat did not suggest that Washington should move more quickly or offer more concessions to Tehran. But he suggested his stance is not at odds with progressives. “For peace to come, there must be a disarmament, and that includes, of course, the nuclear arsenal that Iran is trying to build,” Espaillat noted. “I think that’s very progressive.”

The bonds that Espaillat has nurtured with the Jewish community for decades are designed to build a lasting trust between the groups.

“The best outcome is the building of trust among leaders so that when there are moments of conflict or potential conflict or misunderstanding, that there is somebody you can pick up the phone and go and talk to,” said Arturo Vargas, CEO of the National Association of Latino Elected Officials, which worked with the AJC to create the Latino-Jewish Caucus.

On Monday, after Hamas began firing rockets from Gaza into Israel, Espaillat tweeted his support for Israel: “I condemn these rocket attacks on Israel, and all violence against civilians.”