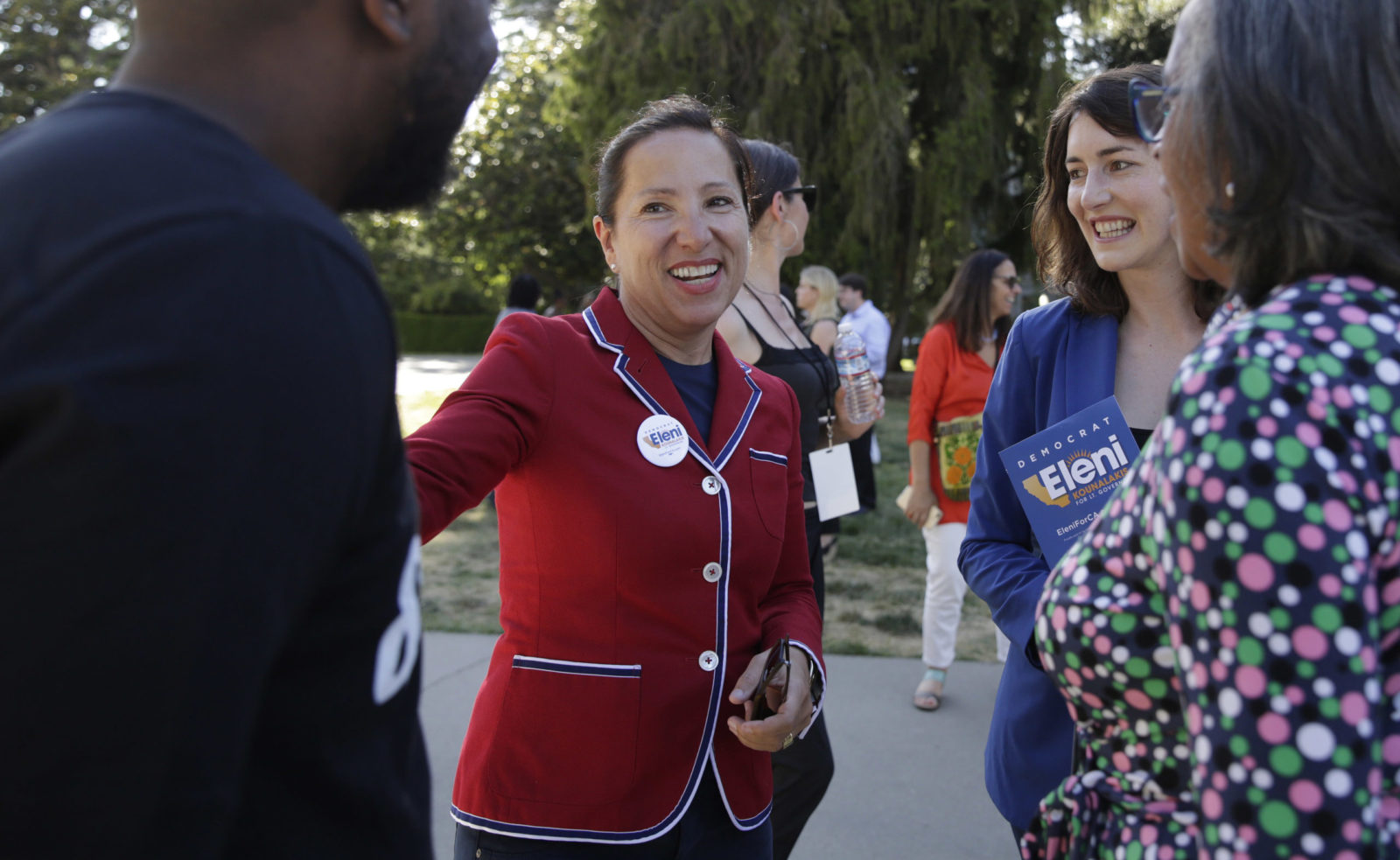 The California Lt. Gov who could soon end up in the U.S. Senate

As speculation swirls over California Gov. Gavin Newsom’s imminent pick to fill the Senate seat that will soon be vacated by Vice President-elect Kamala Harris, a number of likely candidates have emerged to replace her, including California Secretary of State Alex Padilla and Rep. Karen Bass (D-CA). Another potential appointee who has floated somewhat under the radar is Eleni Kounalakis, California’s first female lieutenant governor.

Since she was elected just two years ago, Kounalakis, a 54-year-old former business executive who served as U.S. ambassador to Hungary in the Obama administration, has lent gravitas to a position that is historically limited in scope. While she is regarded as a something of a dark horse in the race to succeed Harris — Newsom has faced pressure to select a woman of color — that Kounalakis has been mentioned at all augurs well for a leader who, strategists say, is well poised to advance to higher office down the line, particularly as rumors have spread that Sen. Dianne Feinstein (D-CA) may not finish the remainder of her term.

Kounalakis could be a favorite to replace the senior senator, though she appears to be in no rush to make that known, swatting away hearsay about any future appointments. “It’s the governor’s decision,” she told Jewish Insider in a recent interview, suggesting that she intends to run for a second term as lieutenant governor. “I’m sure he is going to weigh all the input that he’s received. But as for me, I’m very, very happy to serve as lieutenant governor of California.”

Mary Hughes, a political consultant and the founder of Close the Gap California, an organization dedicated to electing women to the state legislature, said that Kounalakis has established herself as a formidable leader who is focused on doing the job right rather than using her role as a way station on the path to a more high-profile position. “She ran for the office, she wants to do the work, she wants to know the people,” Hughes said. “She wants to understand the ramifications.”

During her short tenure as a statewide official, Newsom has given Kounalakis more substantive assignments than any lieutenant governor in recent memory, according to Dan Schnur, a professor at the University of Southern California’s Annenberg School of Communications who previously worked in politics. At the beginning of her term, the governor named Kounalakis as California’s trade representative, a position that brought her to Mexico, China and India before travel was restricted by the coronavirus pandemic.

“It’s something that he and I decided to do in partnership because I’m a former U.S. ambassador and have a lot of experience in trade issues as well,” said Kounalakis, who also holds influential roles in the higher education sphere, sitting on the boards of public universities in the state.

Kounalakis’s portfolio of responsibilities, coupled with her experience as a diplomat, “sets her up somewhat uniquely as a plausibly credentialed candidate for Senate in a way that most constitutional officers are not,” Schnur mused. “Most state constitutional officers don’t have a lot to do with international relations or foreign policy.”

For Kounalakis, the time she spent in Hungary — an experience detailed in her 2015 memoir, Madam Ambassador: Three Years of Diplomacy, Dinner Parties, and Democracy in Budapest — indelibly molded her political views. Having raised more than $1 million for Hillary Clinton during the 2008 presidential election, Kounalakis scored a foreign posting when Clinton took over the State Department. Though she knew little about Hungary and had expected to be in Singapore until a last-minute change, Kounalakis vowed to take the job in stride and approach it with rigor.

Shortly before embarking on her assignment in 2010, Kounalakis was handed a stack of books about the Holocaust, assembled by a close Jewish friend. At the time, Kounalakis was only passingly familiar with Hungary’s complicity in the genocide of its sizable Jewish population near the end of World War II. But as she settled into her new role, she found herself grappling, perhaps more than she had anticipated, with the dark and lingering legacy of Hungarian antisemitism.

“How could a society that was so advanced, so cultured, so sophisticated, participate in the murder of their own people, including children?” Kounalakis recalled wondering. “How is it possible that such a thing could happen? As I began to read the history and understand the story, what I found is that antisemitism is the first step. It leads toward a justified dehumanization of the people. That is what sets the conditions for neighbors to turn a blind eye.”

Those thoughts were no doubt relevant for Kounalakis during her time in Budapest, when she came to realize that Hungary had never properly reckoned with its direct involvement in deporting hundreds of thousands of Jews to the gas chambers, instead casting itself as a victim of Nazi Germany. Such whitewashing had consequences, Kounalakis concluded, as she witnessed Hungary’s autocratic prime minister, Viktor Orbán, consolidate power, dismantling the state’s democratic infrastructure and reshaping the national narrative to suit his agenda.

“Burying the past,” Kounalakis said, “allows people like Viktor Orbán to manipulate the truth.”

The Israeli-born author Ayelet Waldman has known Kounalakis for nearly 20 years and visited her in Budapest while researching a novel. According to Waldman, it was clear that Kounalakis had developed a nuanced understanding of Hungary’s tortured relationship with the Holocaust and was determined to bring that to light.

After her tour of duty came to an end in 2013, Kounalakis took a job as a State Department fellow, fully expecting to continue her service in a future Hillary Clinton administration. But when Donald Trump announced his candidacy, decrying the “fake news” media while espousing xenophobic rhetoric, Kounalakis shuddered.

“It alarmed me from the beginning,” she told JI. “The way that I was watching Donald Trump’s platform emerge had very strong parallels with what Viktor Orbán was doing in Hungary.”

Rather than standing idly by, Kounalakis — who had previously worked as president of a housing development firm founded by her father — resolved to run for office, embarking on a well-funded campaign for lieutenant governor in which she visited every county in California, a rare feat for a statewide candidate. “I became one of thousands of women across the country who were inspired by Hillary Clinton and who felt the urgency of running for office and other kinds of political engagement,” Kounalakis said. “I put myself forward for office not knowing, honestly, how it would go.”

With endorsements from Harris as well as House Speaker Nancy Pelosi (D-CA), Kounalakis prevailed over her Democratic opponent by 13 points.

In her two years in office, Jewish leaders in California have come to appreciate that Kounalakis is deeply attuned to antisemitism, thanks to her experience in Hungary as well as her own family history. Kounalakis, who grew up in Sacramento, is the daughter of Angelo Tsakopoulos, a wealthy real estate developer who lived under Nazi occupation in his native Greece during the war. Though she says her father’s experience “was different than the kind of dehumanization that was experienced by the Jews,” it has no doubt informed her worldview as the daughter of an immigrant who endured unbearable hardship before finding success in the United States.

“Her story mirrors the story of the Jewish experience in America,” said Richard Hirschhaut, regional director of the American Jewish Committee in Los Angeles, who first met Kounalakis about 30 years ago when he was the director of the Anti-Defamation League in San Francisco and presented her father with an award. “She has a heightened sensibility and sensitivity to antisemitism and to hate. I think it’s fair to say that she was prescient in calling out and identifying the danger that right-wing movements, nationalism, xenophobia and hate pose to democracy across the board, even before the current surge of antisemitism in America. She has had her finger on that pulse for a very long time.”

Kounalakis, who is married to Markos Kounalakis, a syndicated foreign affairs columnist, takes pride in pointing out that California was one of the earliest states to institute mandatory Holocaust education in its public high schools, and she noted that her office is now in the process of helping to create a K-12 curriculum around Holocaust awareness.

Kounalakis’s view of antisemitism extends to the Boycott, Divestment and Sanctions movement, which she found to be more widespread on college campuses in California than she had anticipated. “I do see a strong antisemitic component of the BDS movement,” she said, “and I know not everybody does, but I see it when I talk to people, and I’m concerned about it.”

The movement, she said, worries her because she believes it couches antisemitic tropes within a foreign policy argument that ignores other issues. “If a labor organization that is fighting for the BDS movement in California isn’t talking about China, isn’t talking about Russia,” she added, “I don’t think that they have a very valid case here that this is outrage over foreign policy.”

The lieutenant governor has been to Israel many times and says she has a close connection with the Jewish state. Her late aunt, a Greek-Orthodox nun, lived for almost 30 years next to the Church of the Holy Sepulchre in Jerusalem. “I would go visit her often,” Kounalakis recalled.

Jesse Gabriel, majority whip in the California State Assembly and chair of the California Legislative Jewish Caucus, said he had never met Kounalakis before she was elected but that he has found her to be a thoughtful representative as the caucus has prioritized combating antisemitism, working on legislation around hate crimes and community security. “She speaks our language,” he said.

“Her understanding of contemporary antisemitism and its links to BDS and all the experiences she had as a U.S. ambassador and the integrity and humility that she brings to the job just really impressed me,” Gabriel told JI, adding his belief that Kounalakis is in a strong position to seek higher office if she wants to. “I think she’s someone who has a really bright future ahead of her and somebody that our community should keep their eye on.”

Kounalakis is hopeful that President-elect Joe Biden will take a proactive approach to rebuilding international alliances that she believes have frayed under Trump. “I think that Joe Biden, with his decades of experience in foreign policy, is bringing a very serious team together to restore American leadership in the world,” she said, expressing her admiration for Tony Blinken, the incoming secretary of state whose father served as ambassador to Hungary under Bill Clinton. “They have a lot of work to do and they have to move very quickly. They’ll need to rebuild the State Department and improve morale.”

But Kounalakis is reluctant to discuss her own designs for the future — even as several state officials jockey for Harris’s seat and as Feinstein may be poised to bow out — opting instead to focus on the issues that have occupied much of her time as lieutenant governor, including the pandemic, climate change and trade opportunities.

Her reticence is largely in keeping, it seems, with the eye-on-the-ball approach she has abided by throughout her career in public service.

“One of the things that I think is particularly appealing is that when openings come up, there are people who are immediately mentioned and then there are other people who want to be mentioned,” Hughes, the political consultant, told JI. But Kounalakis, she said, “has none of the unappealing qualities of politicians in a hurry.”