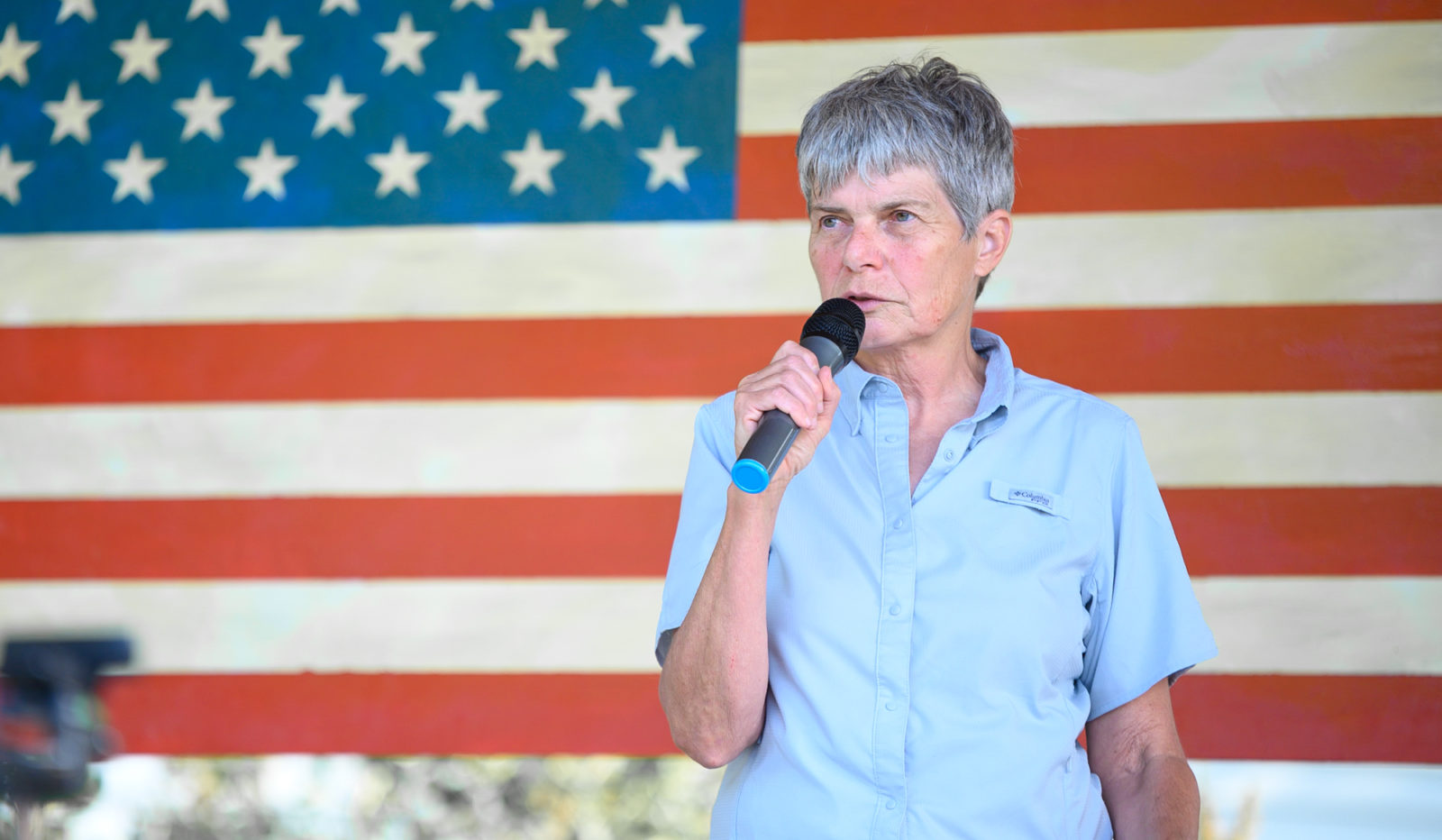 In every sense of the word, Merav Ben-David is an outlier in Wyoming politics.

A Jewish Israeli immigrant who speaks with an accent, Ben-David is running for Senate as a Democrat with a platform focused on climate change in a state that has not elected a Democrat to a federal office since 1976, has a minuscule Jewish population and is heavily economically reliant on resource extraction.

But despite the hurdles in her path, Ben-David believes her message is one that will resonate with Wyoming voters, as long as she’s able to reach them.

“I think the vision that I’m offering Wyoming is much more compelling to many,” she told Jewish Insider. “I’m not saying it’s gonna be easy. We knew that when we started, but I think that a lot of people were ready to hear a different message.”

Ben-David acknowledges, however, that she needs more money in order to disseminate her message to voters. Having spent most of the $81,000 she raised during the primary, she had just $22,000 on hand at the end of July, compared to the $413,000 her Republican opponent, former Rep. Cynthia Lummis (R-WY) had in the bank at the time.

Ben-David and Lummis are competing to replace longtime Sen. Mike Enzi (R-WY), who is retiring.

In an interview with JI, Ben-David laid out her vision to help bolster Wyoming’s economy, which includes shifting miners and oil workers to other fields, creating more work opportunities for young people and attracting remote workers to the state. She also backs several progressive policy priorities, including a federal jobs guarantee and universal healthcare.

But the issue Ben-David emphasized most — which lies at the heart of her campaign — was climate change. This topic, and Ben-David’s observations and research on its impact through her work as an ecologist and zoologist, spurred her to run for office.

“It’s not enough. I need to do more. That was the main motivation. I need to do more in terms of making sure that our younger generations have a livable planet,” she said. “But also specifically to the state that has become my home, to make sure that we are not reliant on an industry that is on the way out.”

Ben-David got her start in the sciences at Tel Aviv University — after completing her IDF service amid the 1982 Lebanon War — and earned a bachelor’s degree in biology in 1984 and a master’s degree in zoology in 1988.

She went on to spend five years as a wildlife tour guide in Kenya before making a drastic shift and relocating to Fairbanks, Alaska, to pursue a PhD in wildlife management.

“I just packed a few things in my suitcase and made it from the equator to nearly the North Pole in one week,” she said.

Despite moving from one of the world’s hottest regions to one of its coldest, Ben-David said she adjusted quickly, and quickly fell in love with winter sports.

“I really enjoyed living in Alaska,” she said. “The cold is something that is really easy to deal with. You just dress warmly, and have heating in your home. It’s the short days in the winter that are difficult to deal with.”

After earning her PhD, Ben-David remained in Alaska for several years and applied for permanent residency in the U.S. Her contributions to wildlife conservation in Alaska earned her support from Sen. Lisa Murkowski (R-AL), then-Sen. Ted Stevens (R-AL) and then-Gov. Tony Knowles for her residency application.

Ben-David said that, once she realized that work would keep her in the U.S., it was critical to begin the process to become a U.S. citizen.

“I’ve been engaged civically since I was a teenager in Israel, when we had all kinds of changes in Israel back in the 70s. I’ve been involved as a citizen,” she said. “You can’t let other people make decisions for you. If you want to be influential, if you want to make sure that things you believe in have a voice, then you have to be engaged.”

In 2000, Ben-David accepted a faculty position at the University of Wyoming. She explained that she settled in the state in part so that she could continue to enjoy winter sports. Around this time, she applied for citizenship, and became a naturalized U.S. citizen in 2009.

Ben-David has also cemented herself within Wyoming’s Jewish community, which has one of the smallest Jewish populations of any state — just 1,150 people, or .2% of the total state population in 2019.

“I think we all know each other personally,” Ben-David said of the state’s Jewish community, remarking that she usually makes matzoh balls for the local community Seders.

Having grown up in Israel, with family still living in the country, Ben-David would bring a unique perspective on the Israeli-Palestinian conflict to the halls of Congress should she be elected — for one thing, she would be the only person with Israeli citizenship ever elected to the Senate. Ultimately, she would like to see a two-state solution, including a shared capital in Jerusalem, she said in responses to JI’s candidate questionnaire.

Ben-David is an outspoken critic of current Israeli policies, which she said make a peace agreement more difficult to achieve.

“Expansion of West Bank settlements, unilateral annexation of Palestinian lands, demolitions of houses, forced relocations of Palestinian families, and continued violence contribute to escalation of the conflict,” she wrote in the questionnaire. “I believe peace can only be achieved if the Palestinian people are treated with dignity, provided with financial assistance to develop a sustainable economy, and their human rights and wishes for self-governance in their own country is guaranteed.”

She added that the Trump administration has likewise undermined peace efforts, and has “made support for Israel needlessly partisan.”

(Read Ben-David’s complete answers and those of other candidates on JI’s interactive map.)

If elected, Ben-David said she would work to engage both sides to pursue a peace agreement. She predicts that the imminent global climate crisis will serve as an impetus to force parties in the Middle East to come together to form agreements, as the impacts of climate change will be devastating for the region.

“It’s not anymore a question of Palestinians versus Israelis. It’s not Saudi Arabia versus Iran. It’s not Turkey versus Egypt anymore,” she said. “If we don’t work together as a humanity to solve our climate crisis, nothing else will matter.”

“Mother Nature doesn’t care about what we think or feel,” she continued. “It is happening right now… I think a lot of people are starting to pay attention. They have no choice. We have no choice.”

In the questionnaire, Ben-David called out increasing antisemitism across the U.S., both in terms of increasing hate crimes and antisemitic political rhetoric, including in her own primary race — where one of her opponents referred to her as a “fake Jew.”

“When antisemitism is virulent and explicit, we must immediately condemn it. When it is organized and violent, we must prosecute it,” she wrote. “But when it is inadvertent, education and compassion will be more effective.”

Ben-David added that she sees antisemitism as part of the broader issue of racism in the U.S.

Should Ben-David be elected, she would join several outspoken critics of Israel in the halls of Congress, some of whom have called to condition aid to Israel or expressed support for a one-state solution.

She told JI that she would tell those who support such measures that U.S. pressure has historically been an ineffective tool to change countries’ behavior, and that only diplomacy will be effective.

“We, the United States, have failed miserably in all attempts to force our vision on other countries. It doesn’t matter if you look at it from the war on drugs or involvement in Vietnam, Korea, Afghanistan, Iraq,” she said. “We failed because we did not use diplomacy as the main approach.”

She highlighted the 2015 nuclear deal with Iran as the government’s most prominent success in recent years.

“If we are willing and have learned how to exert influence through diplomacy with an enemy called Iran, there’s absolutely no reason why we can’t do that with our ally, Israel,” she continued.

Ben-David speculated that, if the U.S. sanctioned or conditioned aid to Israel, Israel would instead turn to the U.S.’s geopolitical opponents.

But Ben-David disputed the idea espoused by some in the American pro-Israel community that criticizing Israel is inherently antisemitic.