The projected primary winner said he is 'running to represent everyone in my district,' and reiterated his support for Israel 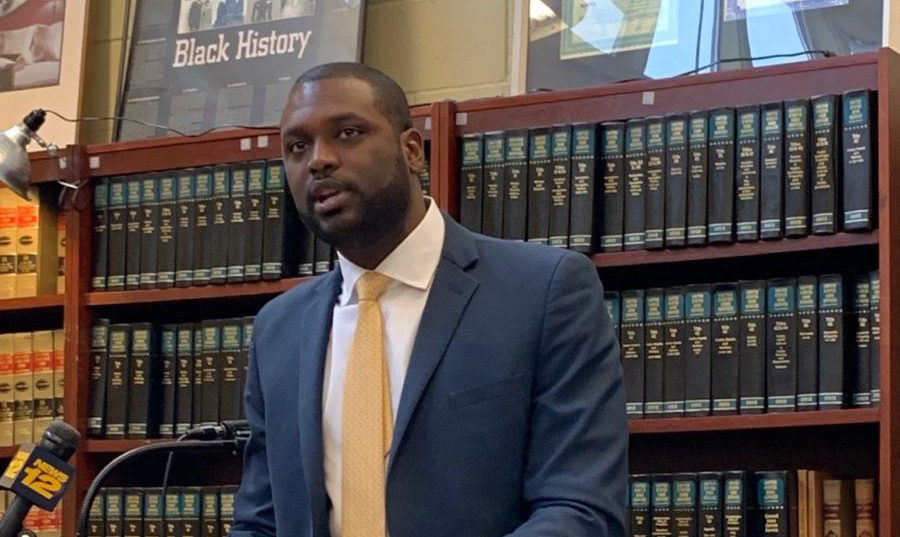 Last summer, Mondaire Jones became the first person to challenge Rep. Nita Lowey (D-NY), the long-serving congresswoman who chairs the House Appropriations Committee, in three decades. But after Lowey announced her retirement, he was joined by a number of candidates who hoped to capitalize on the open seat. But it appears Jones’s longevity as a candidate has paid off. Though he has yet to declare victory in Tuesday’s primary election — where the mail-in ballots remain uncounted — he has a solid lead in the race, having garnered about 45% of the in-person vote, putting him nearly 25 percentage points ahead of Adam Schleifer, who is in second.

In an interview with Jewish Insider on Wednesday afternoon, Jones appeared to be emboldened by his remarkably strong showing in the primary race, which Decision Desk HQ has called a victory for the 33-year-old attorney.

Asked how he feels about filling his predecessor’s shoes, Jones sought to differentiate himself while still adopting a deferential tone. “I wear a size 14, so I’m not sure whether our shoe size is compatible,” he joked during the phone conversation. “But I’m very much looking forward to relying on Congresswoman Lowey for insights. She has been an extraordinary member of the House of Representatives and a leader for this district, and I’m very grateful to her for her decades of service.”

“I think that I’m uniquely able to expand upon her legacy as someone who is poised to become the first openly gay black member of Congress,” Jones continued, “and who is able to go into communities that have been shut out of the political process and speak to their unique needs, to elevate those needs in our political discourse, and to involve them in the political process as part of a growing progressive movement in the United States of America.”

If he makes it to Congress, Jones will likely be one of two openly gay black congressman — the other is Ritchie Torres, who is projected to win his bid to succeed Rep. José E. Serrano in New York’s 15th congressional district, which encompasses the South Bronx.

Jones is poised to represent the 17th congressional district, which includes parts of Westchester and all of Rockland County, home to the largest Jewish population per capita of any county in the U.S.

The presumptive victor, a native of Rockland County, assured those concerned about his stance on Israel, despite being backed by progressive candidates such as Rep. Alexandria Ocasio-Cortez (D-NY) who have made controversial statements about the Jewish state.

“I have noticed that some people are speculating that I’m not going to be a friend to Israel because of certain endorsements that I’ve received by leaders in the progressive movement, and that is simply not true,” Jones said emphatically. “So I would like to clarify that egregious misconception that some of my opponents, it would appear, have been trying to propagate. I have been very public, in fact, of my support of a two-state solution and support of continued security assistance to Israel, and my desire for lasting peace and security in the region.”

“Of course, I want Palestinians to have equal treatment under the law and to receive humanitarian aid and things that I think most people, regardless of their religion, also want,” he said, while adding that he has been an “ardent opponent” of the Boycott, Divestment and Sanctions movement since his sophomore year of college.

When asked if he planned to work with the sizable Hasidic bloc in his district, Jones was unequivocal. “I am running to represent everyone in my district,” he told JI. “You cannot exclude large swaths of your constituency. So I will meet with anyone and everyone, and, frankly, given my progressive domestic policy agenda, I would hope to get support from multiple constituencies in this district who desperately need government to work for them as well.”

Jones supports Medicare for All, the Green New Deal and other policy points that have become rallying cries in the progressive flank of the Democratic Party.

He said he still feels the same sense of urgency that led him to enter the race last year. “It was never anything personal against the congresswoman, for whom I have tremendous respect, and my desire to defeat my opponents in this primary was never anything personal,” he said. “It was about a vision for this country, that this country could finally deliver a government that works for everyone, and not just the super rich and the well-connected in our society.”