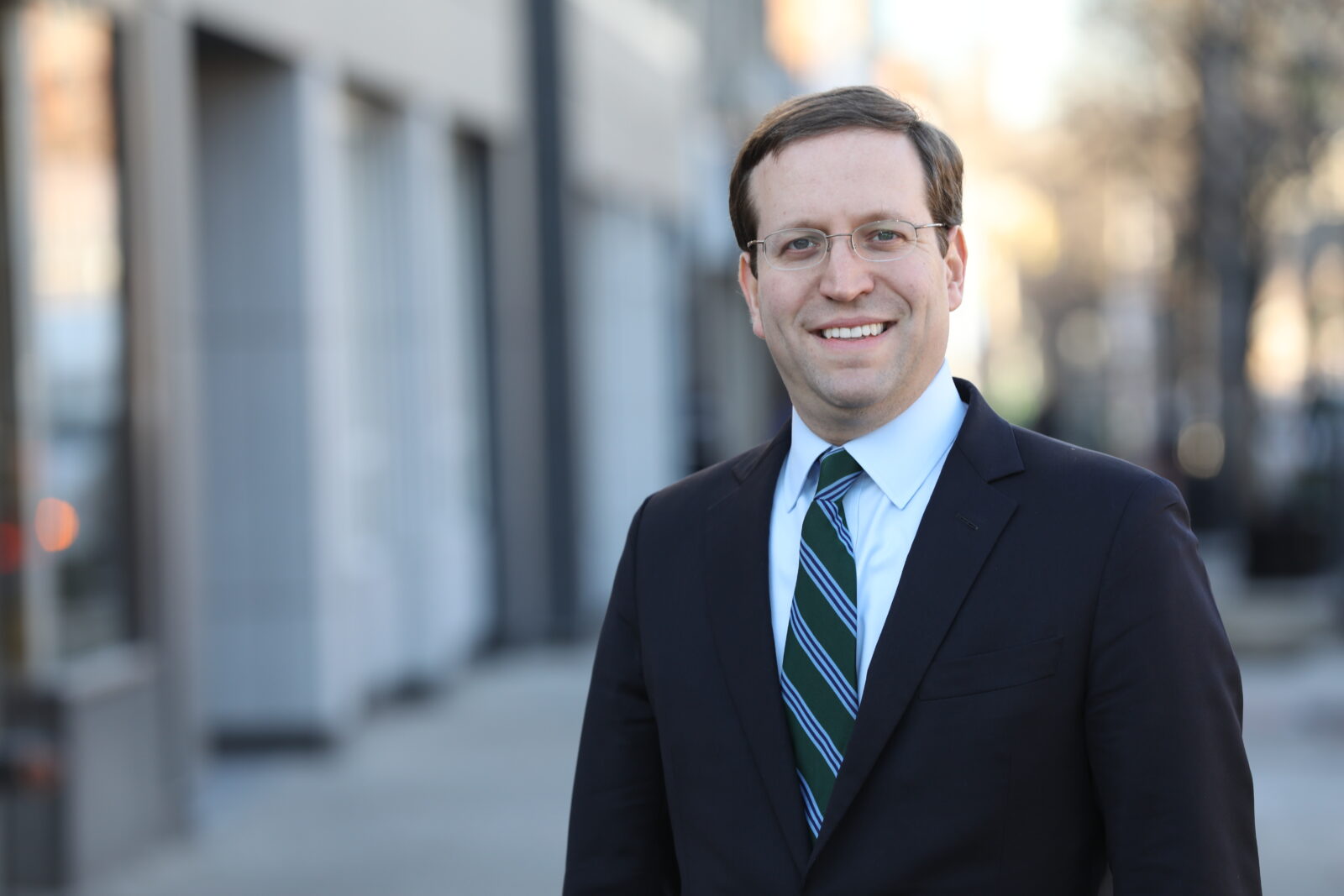 In the race to succeed Rep. Nita Lowey, David Buchwald wants to stand out from the pack

The New York State assemblyman is looking to carry on Rep. Nita Lowey’s legacy, but first he’ll have to come out on top in a crowded primary

This June, Democrats in New York’s 17th congressional district will have a number of candidates to choose from to determine who will succeed outgoing longtime Rep. Nita Lowey. Many of the congressional hopefuls have similar platforms: expanding access to women’s health services, tackling climate change, and tightening gun control regulations. But on one issue, David Buchwald stands apart from the pack.

“Unfortunately the option of going back to [the 2015 nuclear deal with Iran] to make it stronger is going back to a different deal,” Buchwald told the crowd at an NAACP-hosted candidate forum in January. “The question is, if you go back to that deal that was implemented, that deal on its own terms did not have contingent enough enforcement. It only lasted for a handful of years.”

Of the 10 candidates on stage that day, Buchwald was the only one who didn’t support the U.S. reentering the agreement.

No natural successor has emerged to replace Lowey in the office she has held for more than three decades. But Buchwald, 41, wants to convey to voters that he can continue the popular congresswoman’s legacy. After all, it was Lowey’s influence that led him to pursue a career in politics. “She’s one of my inspirations for having gotten involved in public service,” Buchwald, who interned for the congresswoman while a college student, said in a recent interview with Jewish Insider. “I think it’s extremely important that Rockland and Westchester counties have a strong voice in Congress, and I would speak to both further Lowey’s legacy and also try to build some of my own.”

In order to do that, he’ll have to rise to the top of a crowded primary field. Buchwald, a member of the New York State Assembly representing Westchester County since 2013, is one of 14 Democrats competing in the open seat. Other candidates include former NARAL chairwoman Allison Fine, former LA federal prosecutor Adam Schleifer, former Defense Department official Evelyn Farkas, New York State Senator David Carlucci, Westchester County Board of Legislators member Catherine Parker, and Mondaire Jones, an attorney who served in the Justice Department under former President Barack Obama.

Buchwald is the paternal grandson of Rabbi Baruch Rabinowitz, a seventh-generation direct descendant of Rabbi Israel Baal Shem Tov, the founder of the Hasidic movement.

Rabinowitz, the son of the “Brownsviller Rebbe” in Brooklyn, was one of 400 rabbis who marched on Washington in 1943 — three days before Yom Kippur — to ask President Franklin D. Roosevelt to save the Jews of Europe and increase the number of Jewish immigrants allowed into the U.S. A decade earlier, shortly after the Nazis rose to power in Germany, Rabinowitz — who traveled to Jerusalem to study under Rabbi Avraham Yitzchak Hakohen Kook — and a group of his fellow activists had climbed atop the German Consulate in Jerusalem and tore down its swastika flag.

“I am honored that that’s part of my family legacy, that at a time when, frankly, it was not considered typical for a rabbi to be conveying his views to the federal government, that my grandfather was one of the leaders making sure that we tried to live up to our country’s high ideals of being a refuge for people who are afflicted around the world,” Buchwald stated.

Buchwald is a legacy in many ways. His mother, Judge Naomi Reice Buchwald, was appointed to the U.S. District Court for the Southern District of New York by former President Bill Clinton in 1999. “I technically have the privilege of having the word ‘Honorable’ in front of my name, though my mom is the true Honorable Buchwald,” the New York lawmaker told JI.

Born and raised in Westchester, Buchwald had his bar mitzvah at Larchmont Temple. He is presently a member of the Jewish Community Center of Harrison, a progressive Conservative synagogue.

A public school graduate, he studied physics at Yale University, and went on to earn a law degree from Harvard and a masters in public policy from Harvard’s Kennedy School of Government. Buchwald then worked as an economics researcher on antitrust issues and as a tax attorney at the law firm Paul, Weiss. He entered public service in 2009, when he was elected to the White Plains Common Council. In 2012, Buchwald beat two-term Republican incumbent Robert Castelli by almost nine points to win his current State Assembly seat. In his most recent re-election bid in 2018, he received close to 70% of the vote.

It’s his popularity at the local level that gives Buchwald confidence heading into the June 23 primary. He told JI his campaign submitted more petition signatures — almost 4,000 — than any other candidate to qualify for the ballot. He is one of the leading candidates in the race when it comes to fundraising, according to the latest FEC filing. He raised more than $600,000 to date, putting him on par with Farkas and Jones, as well as Schleifer, who is self-funding his campaign, in total contributions.

“I feel like we have a lot of momentum,” he told JI. “We put out a pretty compelling case. I have both an existing base in the district, but also clearly the ability to reach beyond that base and one that the Democratic Party can unify behind.” Buchwald also touted his many local endorsements, including from five colleagues in the state legislatures. “Over 70 elected officials, friends of labor and Democrat groups have endorsed my candidacy,” he said. “I think folks don’t just have to take my word for where I stand. They can look at my actual record of success,” he stressed.

In Albany, Buchwald has made a name for himself by leading the charge against corruption in the state. In his first year in the Assembly, he put forward a state constitutional amendment to revoke taxpayer-funded pensions from corrupt public officials, a measure that was approved in a 2017 referendum. Last year, Buchwald spearheaded the New York TRUST Act, which enables Congress to request New York State tax records for top government officials, including the president. President Donald Trump is now suing to halt the implementation of the law.

Buchwald told JI his “guiding light” has been the advice given to him years ago by Lowey, when he told her it would be an honor to succeed her in Congress one day. “The best advice she had for me was to be as good an assemblyman as I can be,” Buchwald recalled. “I think Democrats will want someone who’s not just a fighter, but also someone who gets things done, and actually produces the results that make a difference to people’s lives,” he added.

Running in a district with a significant Jewish population, Buchwald understands the importance of proving he can build on Lowey’s legacy in supporting and defending Israel. Buchwald was among 74 co-sponsors of a resolution passed by the State Assembly rejecting the BDS movement and all activities in New York that “undermine efforts to achieve a negotiated two-state solution and the right of Israelis and Palestinians to self-determination.” He also co-sponsored a bill to prohibit the state from contracting with businesses that boycott Israel. “My approach [to BDS] as a Congress member would be consistent with my record,” Buchwald said.

Buchwald, who says he has more than 20 cousins living in Israel, first traveled to the country in 2010 on a mission with American Friends of the Hebrew University. During that trip, the lawmaker visited Mevaseret Zion, the sister city of White Plains, and had Shabbat dinner overlooking the Old City of Jerusalem.

A supporter of the two-state solution, “which would likely involve a trade of land for peace,” Buchwald said he hopes to be “an example for building up as much as possible the U.S.-Israel relationship.” He told JI that any Israeli withdrawal from the West Bank must be “Israel’s to determine,” and added that he supports the Trump administration’s recent declaration that “the establishment of Israeli civilian settlements in the West Bank is not per se inconsistent with international law.”

Buchwald cautioned against Congress taking measures that would condition military aid to Israel to pressure the government on settlement expansion or to halt plans to annex parts of the West Bank. U.S. assistance to Israel should not be used “as a bargaining chip” to force Israel into “taking risks that Israelis themselves don’t believe are justified by the circumstances on the ground,” the candidate said.

Addressing the Iranian threat, Buchwald explained his opposition to re-entering the 2015 nuclear deal. “Iran is the chief exporter of terrorism in the world,” he asserted. “There’s no doubt in my mind that Iran still wants to annihilate the State of Israel, and I think it’s imperative that we have a robust sanctions regime directed at Iran to bring them to the negotiating table.”

Buchwald said he was “frankly shocked” that the rest of the field was in favor of rejoining the Iran deal at the January candidate forum. Lowey, who announced last October that she would not be seeking re-election, voted against the Joint Comprehensive Plan of Action (JCPOA), but opposed Trump’s pulling back from the deal. “I would oppose re-entry in the Iran nuclear deal unless the deal, first, curtailed Iran’s ability to finance terrorist proxies around the region, and, second, it has to be a potentially long duration,” Buchwald added. “It’s been 40 years since the Islamic revolution in Iran without any indicated diminution of fanatical fever by its leadership. And so I don’t think there’s any reason under present circumstance to believe that any lesser period of a timeline in any arrangement with Iran would be successful.”

Buchwald’s position differentiates him from the rest of the field. Fine told JI on Monday that she is “in favor of re-entering negotiations based on the JCPOA framework to make sure Iran does not develop a nuclear weapon, while reserving the right to sanction Iran for its non-nuclear malign activities.” A spokesperson with the Farkas campaign told JI that the candidate supported President Obama’s deal in order to “remove the most pressing, volatile, and dangerous component of the Iranian threat and allow the U.S. and the international community to engage Iran more constructively on other issues.” The Farkas campaign added that any new agreement “must go further than the JCPOA did.”

Being a congressional candidate during a global pandemic, with voters confined at home, is a challenge. Nonetheless, Buchwald sees himself as addressing many of the issues he believes voters care about while still focusing on his day job as a state legislator during the COVID-19 crisis.

Buchwald said while his family has been following the stay-at-home restrictions, including postponing his five-year-old daughter’s birthday party, he has been traveling to Albany for votes and coordinating with area hospitals — in conjunction with state and federal public officials — to help constituents with healthcare, unemployment and other basic needs. “I recognize that my constituents elected me to do a job and I am very committed to that and to them,” he said.

While the campaign has shifted to online and remote outreach, Buchwald is confident voters will reward him for his work and choose him to represent them in Washington. “People recognize that right now what we need in government are folks who have the skill set to actually get things done and the commitment to serve.”