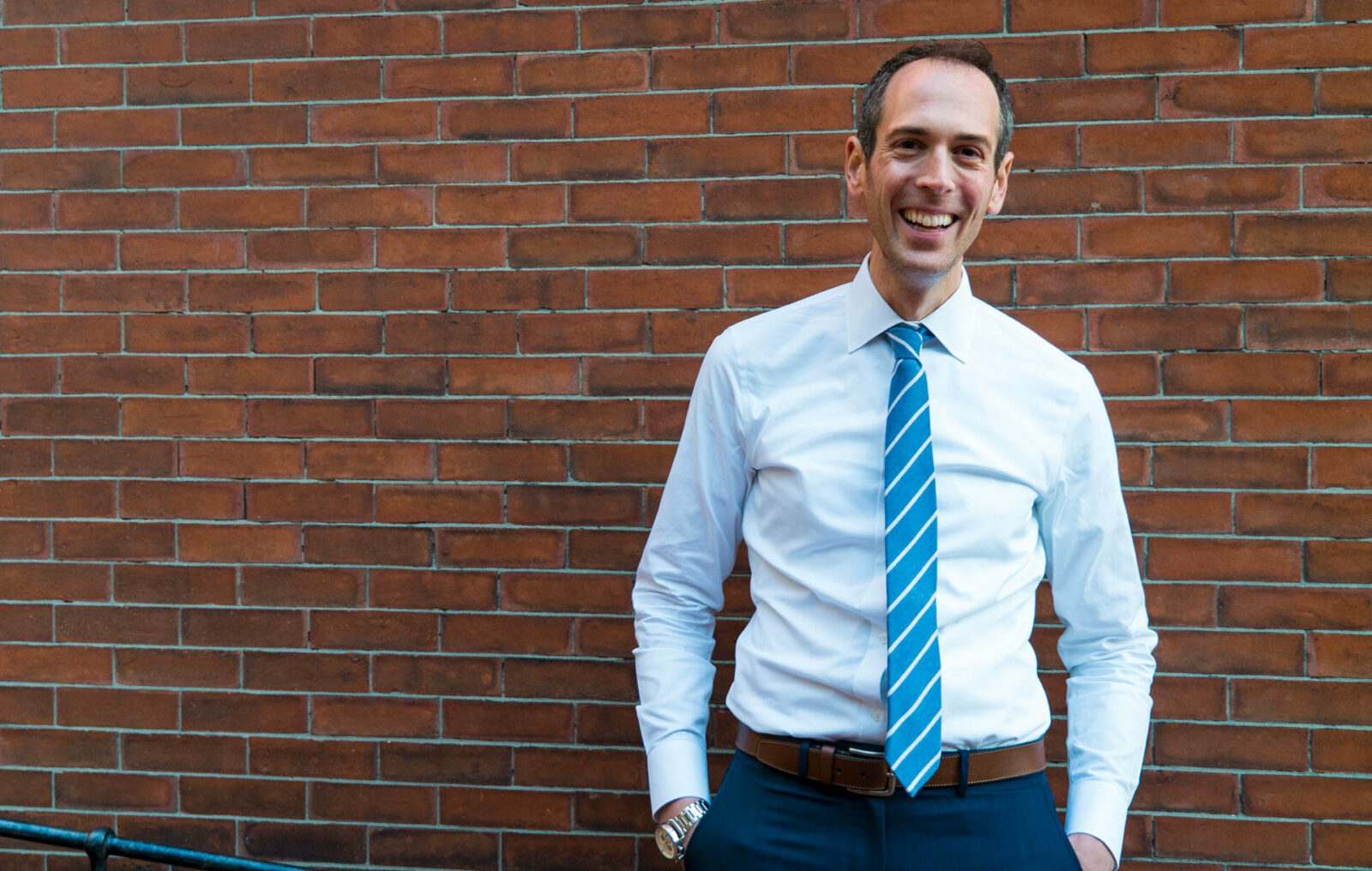 Amid a pandemic, a Boston physician takes on a popular incumbent in Congress

For physician and researcher Robbie Goldstein, the outbreak of the coronavirus pandemic comes at a unique moment, for both him and the country. Goldstein is seeking to unseat longtime Rep. Stephen Lynch, challenging him on the ballot when Democratic voters in Massachusetts’s 8th congressional district head to the polls on September 1. In a recent phone interview with Jewish Insider, Goldstein elaborated on his experience in the health care industry and the federal government’s obligation to protect Americans from this challenging disease.

Background: Goldstein, 36, was born and raised in Pittsford, a suburb of Rochester, New York. The son of a dentist, he had his bar mitzvah at Temple Sinai, a local Reform congregation. After graduating from college and medical school at Tufts University, he trained in internal medicine and infectious diseases at Massachusetts General Hospital, where he then stayed on as a faculty member. For the past five years, Goldstein has served as the medical director of the Transgender Health Program at Mass. General.

Popular incumbent: Goldstein is challenging Lynch, a socially conservative moderate Democrat, who has served in Congress for nearly two decades. Lynch, who represented the 9th district until restricting in 2010, won his 2018 re-election bid with 71% of the vote. The other challenger in the September 1st primary is Brianna Wu, a video game developer, who is trying her luck a second time after receiving 22 percent of the 2018 primary vote. There’s no Republican candidate on the ballot for the general election.

Prime issue: Goldstein sees health care as one of the most important issues for Americans. “People recognized in November and December that health care is the largest issue that we are facing right now as a country, and our ability to fix this broken system is up to the leaders we elect in this election year,” he explained. The coronavirus outbreak, he added, just turned it into a singular focus. Goldstein told JI he sees himself in a unique position — “with the experience and knowledge that’s necessary” — to lead on reforming the health care system.

Fighting COVID-19: Goldstein suggested that if the federal government had heeded early warnings as far back as January that the U.S. was susceptible to the pandemic, “we would have prevented the devastating impact that we’ve seen over the past week.” Goldstein pointed out that with advance notice, states would have been able to create a system that was prepared for large-scale virus testing and the federal government “would have been able to make sure that the economy was prepared to handle what may be a prolonged period of social isolation.”

Jewish heritage: Throughout college and medical school at Tufts University, Goldtein told JI he frequently attended Hillel events, and continues to join the Tufts Hillel community for High Holiday services. After medical school, Goldstein began to host Passover seders with friends in Boston, and prior to the COVID-19 outbreak, he told JI, he was attending Shabbat services at synagogues throughout the district to meet Jewish voters. Goldstein said he plans to renew these visits once the restrictions on social gatherings are over.

His case against Lynch: Looking to strike a contrast with his opponent, Goldstein cited Lynch’s vote against the Affordable Care Act in 2010 and opposition to marriage equality as a state senator. In 2013, Lynch was the only member of the Massachusetts delegation who did not sign on to a court briefing against the Defense of Marriage Act, which he blamed on an email glitch. Lynch has a varied record when it comes to reproductive rights, leading Goldstein to describe him as an “anti-choice” Democrat. Goldstein added that the real contrast he’s making is not just about the votes Lynch cast in office — but about “what he hasn’t done over the past 19 years.”

Lynch’s record on Israel: Lynch voted in favor — but wasn’t among the 351 co-sponsors — of last year’s bipartisan anti-BDS resolution (H.R. 246). He co-sponsored H.R. 326, which reaffirmed U.S. support for the two-state solution and included amendments reaffirming the “ironclad” U.S. commitment to the 10-year Memorandum of Understanding with Israel and committing to annual military assistance without new conditions. Lynch, chairman of the House Subcommittee on National Security, joined several congressional missions to Israel in recent years. In 2018, while visiting the Middle East, Lynch criticized President Donald Trump’s inconsistent policy on Syria and questioned the decision to move the U.S. embassy to Jerusalem, noting that it complicated relations with Jordan.

Trending: In the interview with JI, Goldstein compared himself to Marie Newman, a progressive candidate who defeated moderate Rep. Dan Lipinski (D-IL) in the Democratic primary in Illinois’s 3rd district earlier this month. “I absolutely see that there are changes happening all across this country and I think Illinois is a fantastic example in this election cycle,” he said. “There’s a limited space — and I would say no space — in the Democratic Party for an anti-choice Democrat, for somebody who is going to stand against what the Democrat Party feels is so important. But voters are also looking for people who are going to bring in new and fresh perspectives.” Goldstein also cited first-term Massachusetts Rep. Ayanna Pressley (D-MA), who is from the neighboring 7th district and defeated incumbent Rep. Mike Capuano in 2018.

‘Unwavering’ but willing to criticize: “I believe that we should be an unwavering supporter of Israel. I believe in Israel’s right to exist and to remain a secure and democratic Jewish state, and that does necessitate that we have a two-state solution,” Goldstein told JI. “We also have to recognize that just because we have an unwavering commitment to Israel does not mean that we don’t have the freedom to criticize how the Israeli government may use our aid and may use our support. We have a right and an obligation, I think, to speak up when we see an ally of ours use American resources in a way that goes against our own values as well as their own values.”

Not a fan: Goldstein said he did not support President Trump’s moves on the Jerusalem embassy and Golan recognition because it left America in a position “where our ability to support a peaceful solution to the Israeli-Palestinian conflict is weakened.”

No on conditioning aid: Goldstein said that he would not support conditioning military aid to Israel as a means to put pressure on settlement expansion or in the wake of West Bank annexation. “We need to make it very clear to Israel that we will support them, and conditioning aid to Israel, I think, does pull back on some of that support,” he explained. “But we also have to be very clear that there are consequences and there are lines that Israel cannot cross — they cannot violate human rights of others, we need to make sure that everyone has access to clean water, that no one is arbitrarily detained, that people have access to the flow of goods and services.”

Definition department: “I don’t think that I would say that anti-Zionism is a form of antisemitism,” Goldstein told JI.

Delayed flight: Goldstein says he has yet to visit Israel because he was in medical school at the time his sister tried to convince him to join a Birthright trip. “It has been challenging to find time to travel to Israel when I’m working 24 hours a day, and at maximum get seven days off during medical training,” he said. “I would love to be able to plan a trip to Israel. I think it might have to happen after the campaign.”

Diplomacy first: Goldstein told JI that he’s in favor of relaunching talks with Tehran about rejoining the 2015 nuclear deal, but any such agreement “may need to change to reflect what has happened over the past four years.” On maintaining a military presence in the Middle East, Goldstein said he would like to see the U.S. “transition from a military-led force to a diplomatic-led force.”

Views on the Squad: “I certainly don’t think they’re the face of the Democratic party,” Goldstein said about the group of four progressive congresswomen — Reps. Pressley, Alexandria Ocasio-Cortez (D-NY), Rashida Tlaib (D-MI) and Ilhan Omar (D-MN). “I think the Democratic party is a big tent party and we have many faces, many people who represent us. I think that they’ve been helpful in driving conversations, in bringing new experiences and new perspectives to Washington that we didn’t see before. So I want to give the Squad credit for really pushing forward a conversation that the Democratic party should be having right now.”

Combating antisemitism: The House candidate suggested that the federal government needs to do more to combat the rise of antisemitism in the U.S. and across the globe. Last year’s House resolution condemning antisemitism and all hate, he said, wasn’t adequate enough in addressing the concerns of the Jewish community. “We continue to see a rise in antisemitic attacks. We continue to see Jews all across this country feel unsafe at times when they’re going to synagogue or going to community,” he said. “So we need to be constantly vigilant and constantly improving our efforts to decrease antisemitism across this country.”

Smooth transition: Goldstein described the transition from medicine to politics as “eye-opening” but also “very comfortable.” There are “certainly things that happen in politics and happen in campaigning that I’m just not used to,” he told JI. “But there are other things that feel just like being in the hospital. I would say that the pace of campaigning is very similar to the pace of being in the hospital — the hours and the amount of work that needs to be done are very similar to my time as a medical resident and working in the hospital. I don’t mind not sleeping. I don’t mind getting called in the middle of the night and I don’t mind being on the go 24 hours a day. What’s been really helpful for me is that I get to talk about the things that I’ve talked about with my patients for so long and now we’re just talking about them publicly.” Asked how he’s balancing the time being a full-time physician and a candidate, Goldstein quipped, “The true answer is a lot of coffee.”

Fun fact: Goldstein says the theme of his bar mitzvah was Broadway musicals. “Each table was a different musical and each family member came up and sang a karaoke song from that musical with me as part of the bar mitzvah,” he recalled. “Which I think explains some of the conversations that we have in the long car rides that we have around the district and the music that I tend to listen to.”