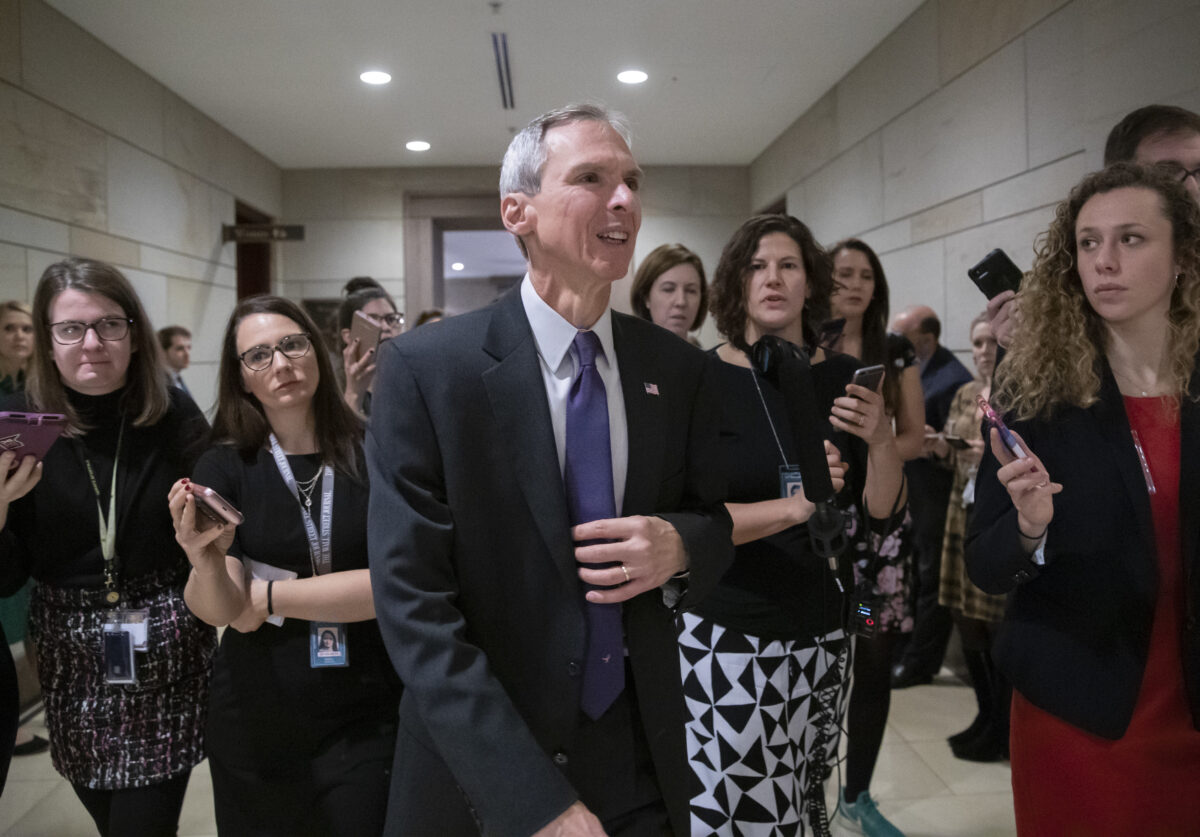 Rep. Dan Lipinski is met by reporters as he leaves the Democratic Caucus leadership elections at the Capitol in Washington, Wednesday, Nov. 28, 2018.

Details: Newman, who lost to Lipinski by a small margin in 2018, received 47% of the vote to Lipinski’s 45%, according to unofficial results. Rush Darwish, a Palestinian-American activist who went after the eight-term congressman and Newman for their support of Israel, came in a distant third with a little over 6%. Turnout yesterday was slightly higher than 2018 despite concerns that the campaign would be overshadowed by the growing threat of COVID-19.

Wednesday morning quarterback: Richard Goldberg, who served as chief of staff to former Governor Bruce Rauner (R-IL) and senior aide to former Sen. Mark Kirk (R-IL), blamed “pro-Israel Democrats” for abandoning Lipinski, who was outspent 3-1 by outside groups supporting Newman. “Congressman Lipinski is an advocate for a strong national defense, a stalwart supporter of the U.S.-Israel relationship, and an ardent proponent of efforts to counter the myriad of threats posed by the Islamic Republic of Iran,” Goldberg explained to JI. “Above all, he is a moderate who believes in bipartisanship and common sense. When a group like IfNotNow is celebrating a primary outcome, you know this is a big loss and embarrassment for pro-Israel Democrats.” Goldberg, who has served as an advisor to several winning campaigns in Illinois since 2004 — and recently served on President Donald Trump’s National Security Council — added that Lipinski “will be missed” in Congress.

Pushing back: Mark Mellman, CEO of the Democratic Majority for Israel, told JI that his group chose not to endorse in the primary because as “an organization of Democrats and like most Democrats, we do not believe the incumbent represents the values of the Democratic Party.” Mellman cited Lipinski’s pro-life and anti-LGBT views, opposition to Obamacare and stance against stem cell research as reasons not to support Lipinski, adding that “criticism by Republicans” like Goldberg “is neither surprising nor meaningful.”

Taking credit: Ben Shnider, vice president of political affairs at J Street, told JI that Newman’s win “demonstrates the momentum behind her pro-Israel, pro-peace, pro-diplomacy views in today’s Democratic Party. We were proud to support her and look forward to working with her in Washington.” Newman said she would support conditioning aid to Israel based on its policies toward the Palestinians. “The U.S. has a responsibility to examine how aid to Israel is used and that we should ensure that this aid is not used to support actions and policies that undercut our values.” She told JI that aid should not “support the Israeli occupation of the West Bank and the Israeli blockade of Gaza.”

Flashback: Talking to JI earlier this year, Newman stressed that all issues need to be agreed upon in negotiations between Israelis and Palestinians, and that the U.S. should play a strictly supportive role, not dictate policy. In her position paper, she wrote that Palestinians “whose homes in Israel and the Palestinian territories were lost as a result of the conflict have the right to reside in Israel or Palestine and that the resolution of the conflict should include a fair and just resolution of the rights and aspirations of Palestinian refugees and Palestinians in the diaspora in accordance with UN Security Council resolutions.”

Across the aisle: In the GOP primary for the 3rd district, Republican Will County Board Member Mike Fricilone earned his spot on the general election ballot, knocking out Holocaust denier Arthur Jones, who was the sole Republican candidate in 2018, who came in third place with 10% this time around.