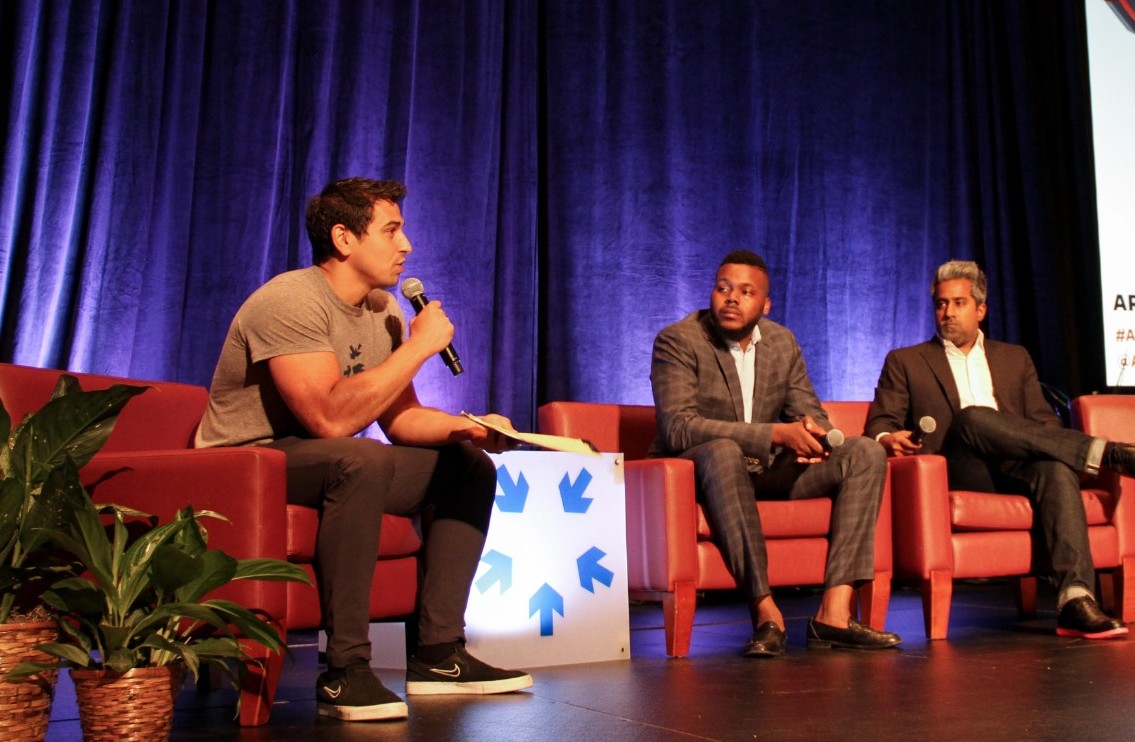 Ravi Gupta, a former Obama staffer, is the founder of Arena, a progressive political action group, and he’s not shy about supporting the Jewish state

On an evening in late January, a group of young progressives gathered in the Manhattan offices of Arena, an organization dedicated to supporting fledgling political candidates on the left. Arena hosts monthly meet-ups that are open to the public, and Ritchie Torres, the 31-year-old Bronx councilman and Democratic congressional hopeful, was introducing himself to the crowd that night. Torres has been gaining momentum since launching his campaign last summer — though he has a challenging primary race ahead.

Still, Torres can at least rest assured that he has the backing of a man who helps candidates thrive in such contests: Ravi Gupta, the former Obama campaign staffer who founded Arena in the wake of the 2016 election. Two years ago, Gupta launched several long-shot candidates into office, including Reps. Haley Stevens (D-MI), Lauren Underwood (D-IL) and New York State Senator Alessandra Biaggi.

Gupta, 36, is unusual in the sense that he carries himself like a politician even as he operates out of public view. He says he has no plans to run for office, but one imagines it would come naturally to him. He’s poised, well-read and speaks diplomatically on a wide range of issues. Gupta stands out, too, because he travels in progressive circles but holds some opinions that do not always mesh with modern left-leaning ideology. For instance, he is a vocal supporter of Israel — a nation not without its faults, he admits, but “created with a noble purpose” — and he does not hesitate to call out antisemitism when he sees it.

If Gupta’s beliefs aren’t nonexistent among progressives, they have become somewhat rare as the Boycott, Divestment and Sanctions movement has gained traction across the nation — a trend Gupta finds troubling. He has no reservations supporting Israel, approaching the topic in a thoughtful, engaging manner that helps “bridge the Israeli narrative with the progressive narrative,” according to Seth Cohen, the founder of Applied Optimism, a community design lab, and the former senior director of the Charles and Lynn Schusterman Family Foundation, which is dedicated to Jewish causes.

Gupta’s outsider status makes him a unique ally. “People like Ravi oftentimes can tell the stories of Israel in ways that Israelis and members of the American Jewish community can’t,” Cohen, who has been to Israel with Gupta, told Jewish Insider. The ease with which Gupta moves between different worlds also underscores, in a broader sense, his effectiveness as a political organizer who is capable of helping insurgent candidates cross over into the mainstream. “He is,” Cohen said, “a rare kind of boundary-spanner.”

Born in Brooklyn and raised on Staten Island, Gupta has always operated somewhat in-between — he has a white mother and an Indian father who emigrated to the United States in his early 20s. It was former President Barack Obama’s bi-racial identity — and the uplifting stories he told about himself — that would convince Gupta to suspend his studies at Yale Law School and join the Illinois senator’s presidential exploratory committee in 2007.

“I saw in him somebody who felt different than anybody else I’d seen in politics,” Gupta told JI in an interview on Manhattan’s Lower East Side. “Somebody who articulated a generous spirit about the American people, who believed in the capacity of people to come together and work through their differences.”

When Obama won, Gupta took a job as the special assistant to Susan Rice, then the ambassador to the United Nations — an experience that would further alter his politics. “What I witnessed at the U.N., especially in the General Assembly, was an obsessive focus on Israel from major human rights abusers that seemed to me super suspicious,” Gupta said. “Why are we talking about boycotting Israel?” he mused. “There are infinitely more horrible human rights abusers way ahead in line. A good example is China.”

That notion, he said, was thrown into sharp relief on trips to Israel with the U.N. and later through the Schusterman Foundation’s REALITY program. Gupta recalled visiting the Golan Heights. “The last time I was there, you see territory controlled by ISIS, Al Qaeda, the Syrian government — all forces that are explicitly hostile to Israel and to human rights generally,” he told JI. “And so, you start to think about the territorial integrity of Israel much differently than on paper.”

He is aware that his views set him apart in progressive spaces. “What makes me a little bit different than some of my friends in the work,” Gupta told JI, “is that I think I have a stronger feeling about the connection between” anti-Israeli sentiment and antisemitism. Gupta isn’t of the opinion that any opposition to Israel is inherently antisemitic — and he is no fan of Israeli Prime Minister Benjamin Netanyahu. “But I do think there are many people I know who are playing into the hands of people who are antisemitic.”

Gupta stayed with the U.N. for a little over a year. In 2010, he took a sharp turn in another direction, moving south to found a network of charter schools called RePublic. He wanted to make a difference in an area where educational opportunities were scarce — and after consulting with Nashville’s former mayor, Karl Dean, he got to work, establishing six schools in six years.

The day Trump was elected, Gupta was so shocked by the outcome that he wasted no time in coming up with a response, calling up friends and colleagues as he sat in the parking lot outside one of the schools at which he had been a principal. The idea for Arena was hatched from these discussions — and right away Gupta began making plans to move back to New York to get started.

Michael Simon, the Obama campaign’s former director of analytics, told JI that he was immediately impressed with Gupta’s vision for Arena. “Our first meeting was a bolt of lightning,” said Simon, a co-founder of the data analytics startup Elucd, who sits on Arena’s board. “The way he thought about the world was a bit of a shock to the system. He was thinking out loud about the biggest, thorniest problems that exist in the world that no one is solving and how we might solve them together.”

Arena — which has hundreds of donors, Gupta says, but whose biggest backers include the Silicon Valley couple Swati Mylavarapu and Matt Rogers — has become an estimable force thanks in part to its fellowships and training academies. In 2018, the organization supported 37 state- and congressional-level candidates through its fellowship program, 35 of whom won their primaries and 21 of whom ultimately made it to office.

“I think the work they have been doing has been really focused and really helpful and really additive in ways that hadn’t been present in American politics,” said Matt McLaughlin, the founder of Win, a political consulting and media agency, who has spoken at Arena events.

Of the many issues Gupta hopes to address this election, the rise of antisemitic violence in the United States is high among them. “The way we’ve looked at it is we don’t support any candidates who advocate hate based on racial or ethnic identity in any form, and we’re on the lookout for it,” he told JI. “I think we’re even more vigilant now, especially given what’s going on in New York,” where antisemitic hate crimes have skyrocketed in the past year.

Gupta is also alarmed by what he sees as a growing tolerance for antisemitism in the U.S. “There are candidates in [New York City] who have been flirting with antisemitism,” Gupta said, though he declined to name names. “I think we as an organization need to do more and play more of a leading role in saying that’s just not OK. I expect, when hate crimes occur in any form, candidates to forcefully speak out against them. As I looked around the city, there were many who were clear about it, and then there were some who weren’t. I think that is revealing.”

As the November election nears, Gupta and his team have their sights on legislatures in five key states — Texas, Michigan, North Carolina, Arizona and Florida — and he anticipates that Arena will work with more than 100 candidates in an effort flip those chambers. The group has scaled considerably since the last election and has since partnered with Future Now, a similar organization run by former New York State Senator Daniel Squadron.

For the moment, Gupta is tight-lipped about which candidates Arena will endorse this cycle, though some in New York have been announced, including Alvin Bragg, who is challenging Manhattan District Attorney Cyrus Vance; Adam Bunkeddeko, who aims to unseat Brooklyn congresswoman Yvette Clarke; and Torres, who is among more than a dozen Democratic candidates vying to succeed outgoing Rep. Jose Serrano.

Arena runs applicants through a rigorous vetting process before signing on with them. Gupta and his team ask most candidates to read Obama’s 2008 speech on race, “A More Perfect Union,” which reflects a vision of the world that Gupta still believes in. He wants to know if candidates are dedicated to “balancing the need to fight for progressive policy with the need to bridge across the progressive divide,” he said.

Though Gupta has shifted gears several times in his relatively short career, he has always abided by that ethos, which inspired him to join the Obama campaign 13 years ago. It may feel somewhat dated now in light of how much the political landscape has changed since 2008, but he thinks it is still relevant.

His belief in that message would suggest that he himself is an ideal candidate for Arena — and McLaughlin, for one, hopes that Gupta will choose to run for office someday. “I keep telling him,” McLaughlin said. “He always gives me the ‘no comment.’” For now, however, Gupta feels most useful operating behind the scenes as he travels the country meeting with candidates who, he hopes, can help narrow the yawning divisions in American politics.

“It’s a cathartic experience, in many ways, to be in the middle of this election, where you could feel a little bit hopeless and feel almost like a bystander,” Gupta said. “One of the great things about Arena, and being with Arena, is that, in some very small way, we’re helping to do our part to make sure the outcome in 2020 is better than 2016.”