The Arizona representative is the first Democrat to enter the race following Sen. Kyrsten Sinema's departure from the Democratic Party 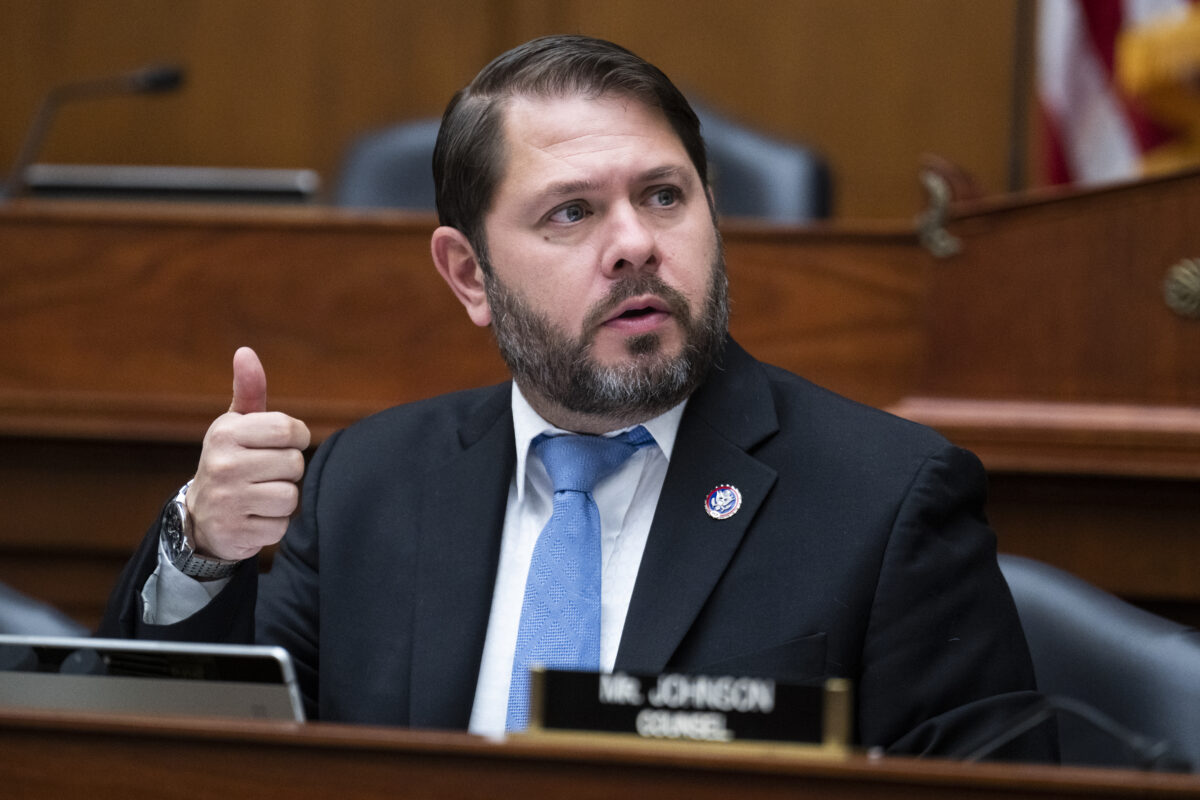 Rep. Ruben Gallego (D-AZ), a progressive congressman from Phoenix, said on Monday that he would run for the seat held by Sen. Kyrsten Sinema (I-AZ), whose high-profile defection from the Democratic Party last month drew liberal backlash.

“The problem isn’t that Senator Sinema abandoned the Democratic Party — it’s that she abandoned Arizona,” Gallego, 43, said in a statement. “She’s repeatedly broken her promises, and fought for the interests of big pharma and Wall Street at our expense.”

The announcement, which had been expected, sets up what is likely to be a hotly contested three-way race in a key battleground state, where Democratic gains have contributed to a slim majority in the Senate.

That majority grew even slimmer this past December, when Sinema, a former House member who in 2018 became Arizona’s first Democratic senator in more than two decades, left the party and officially registered as an independent, even as she has continued to caucus with the Democrats.

Sinema, 46, has yet to reveal if she will pursue a second term, and a spokesperson for her office did not respond to a request for comment on Monday in response to Gallego’s challenge. In a statement posted to Twitter from her Senate account on Monday afternoon, Sinema said she is “continuing to do what” she has “done for the last 20 years – deliver results for AZ.”

“Last Congress we delivered landmark laws to make Arizonans’ lives better,” Sinema added, appending a video in which she touted “bipartisan victories” such as the infrastructure bill. “I’m excited to keep up the momentum in the 118th Congress and secure even more wins for our state.”

The tweet was released hours after Gallego had posted his own campaign launch video in English and Spanish. The son of Mexican and Colombian immigrants describes his experience “growing up poor” in Chicago, affirms his commitment to the “American dream” and is pictured speaking to a group of veterans at an American Legion in Guadalupe, Ariz., among other things.

“Most families feel that they are one or two paychecks away from going under,” says Gallego, a Harvard graduate and Marine veteran who served in Iraq before he became an elected official. “That is not the way that we should be living in this country. The rich and the powerful, they don’t need more advocates. It’s the people that are still trying to decide between groceries and utilities that need a fighter for them.”

The five-term Democrat, who previously served as a state legislator, would be Arizona’s first Latino senator. His campaign did not respond to a request for comment on Monday.

As the first candidate from either party to announce a challenge ahead of the 2024 election, Gallego, who had long intimated that he was gearing up for a Senate bid, could ultimately benefit from an uncontested Democratic primary campaign. The race has so far drawn only limited interest from other Democrats in Arizona.

The congressman’s ex-wife, Kate Gallego, the Jewish mayor of Phoenix, had been eyed as a possible Democratic contender but told Axios that she isn’t planning to run for the seat. Rep. Greg Stanton, a Democrat whose district sits entirely within Maricopa County, had also been floated as a potential challenger until last week, when he took himself out of contention in a social media statement. Regina Romero, the Democratic mayor of Tucson, is another Senate prospect whose name has been mentioned in recent weeks, even as she has yet to reveal publicly if she is weighing a challenge.

Among the Republicans who are reportedly considering bids or who have been encouraged to run are Blake Masters, who failed to unseat Sen. Mark Kelly (D-AZ) in the midterms, and Kari Lake, the far-right election denier who has refused to concede her loss to Gov. Katie Hobbs, a Democrat, in Arizona’s gubernatorial race.

Two recent polls, including one conducted on behalf of Gallego, showed Lake, a former television news anchor in Phoenix, narrowly winning with a plurality of the vote in a three-way matchup with Gallego and Sinema. The hypothetical general election outcome suggests a possible scenario — as some political observers envisioned to Jewish Insider on Monday — in which the two losing candidates ultimately split the Democratic vote, clearing the way for a Republican upset.

In each of the surveys, Gallego was close behind in second place and statistically tied for first in his own internal poll with 4o% of the vote — just a point short of Lake. Finishing third in both polls, Sinema’s support was in the low teens.

Thomas J. Volgy, a professor of political science at the University of Arizona in Tucson, said it was too early to draw any firm conclusions about the race, which is nearly two years away. “We really have to see what unfolds in the next six months in Washington,” he told JI.

Still, a Democratic strategist in Arizona who is supporting Gallego but is not officially involved with his Senate campaign told JI that the congressman is likely to succeed in peeling a significant number of supporters away from Sinema as the race progresses — including “major donors” who feel that Sinema became uncommunicative when she entered the Senate, even as she has increasingly assumed a national profile.

In her home state, the strategist said that Sinema has “gone into a cocoon that has really hurt her,” alienating many longtime backers who had hoped to see more engagement. “It was like a light switch went off from over-communicating with her constituency and her supporters to not communicating at all,” the strategist, who asked to remain anonymous because of the sensitivity of the discussion, told JI. “She did not need to be in this position. This was self-inflicted.”

A spokesperson for Sinema did not respond to a request for comment.

Alan Zeichick, a Democratic activist and Jewish community member in Phoenix who is supporting Gallego, said he believed the Jewish community will “rally around” the congressman’s campaign, describing him as “very well-traveled within Jewish circles.”

Gallego, whose son is Jewish, has expressed personal consternation over the heightened security presence at synagogues across the U.S., where violent attacks have risen sharply in recent years. “It’s a very sad statement that that is a very common thing now that happens,” he said during a Helsinki Commission hearing on antisemitism in Washington, D.C., last month.

The congressman has also described his appreciation for the story of Israel as a “natural” consequence of his family’s immigrant background. “Israel has a better appreciation, I think, for immigrants and what they bring to the country,” Gallego said in an interview with Tablet magazine when he first ran for Congress in 2014, “and we’re starting to lose that here in the United States, especially in Arizona, and we need to start changing Arizonans more to the Israeli mindset of immigrants as an asset.”

“To the best of my knowledge, he’s been a very reliable vote for Israel,” said Zeichick, who sits on the board of the Jewish Community Relations Council of Greater Phoenix.

Zeichick cited, among other things, Gallego’s opposition to the Boycott, Divestment and Sanctions movement and his support for continued security aid to Israel, including supplemental funding for its Iron Dome missile-defense system. “He’s also been very fair in the way he’s treated Israel and the Palestinian issue,” Zeichick told JI. “The issues that are really important for Israel’s security, he’s been there, but he’d also like to see less tension.”

During the start of his congressional tenure, Gallego faced some scrutiny from pro-Israel activists who had lobbied for him to oppose the Iran nuclear deal as it was being negotiated by the Obama administration in 2015. While Gallego had initially signed a bipartisan letter in which he and most of his fellow House members in Arizona expressed mutual skepticism of the accord and laid out “requirements for a final deal,” he ultimately put his reservations aside and supported the agreement.

Sinema, for her part, opposed the Iran deal as a congresswoman.

In previous races, Gallego has earned endorsements from the political action committees of both Democratic Majority for Israel and AIPAC, whose political leadership conference he attended earlier this month in Washington, D.C.

“I support a strong U.S-Israel relationship because it’s actually in the best interest of the United States for us to have that relationship,” the congressman said in a video recently shared by AIPAC on social media. “We have common values, common interests and also a common heritage and history — and it’s one of our few partners in the Middle East right now that we can trust 100%.”