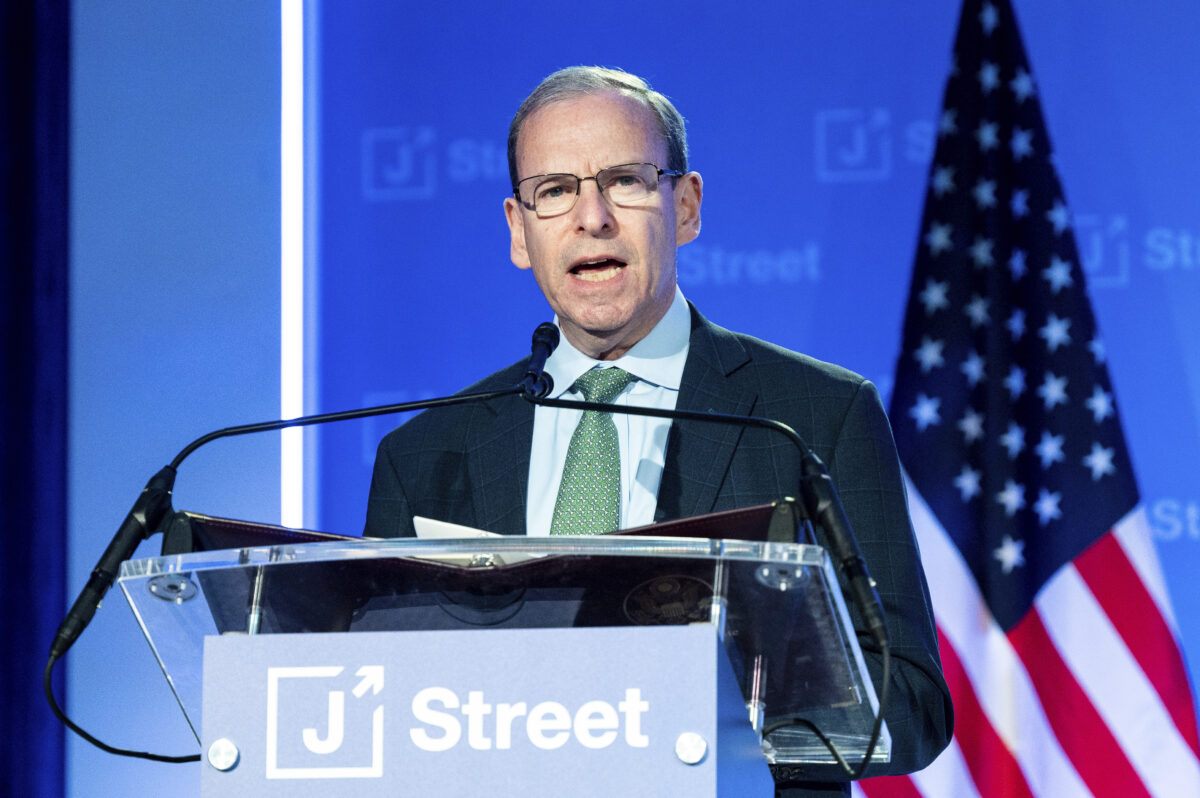 For three days, the lobby of Washington’s Omni Shoreham Hotel, just above the bucolic woods of Rock Creek Park, was the place to be for American Jews who are not pleased with the status quo regarding Israel. It was J Street’s first in-person national conference since before the COVID-19 pandemic, and after Monday night’s gala dinner, activists and policymakers hobnobbed with tuxedo-clad members of Congress who had come straight from the evening’s other big Washington event, the White House congressional holiday party.

But the excited “great-to-see-you” exclamations and the warm hugs belied an undercurrent of distress among the roughly 2,000 J Street supporters who showed up to the conference. The organization recently added “pro-democracy” to its tagline, alongside “pro-Israel” and “pro-peace,” and concern for the state of democracy in the United States and Israel set the tone of the event.

Speakers argued that the U.S. had dodged a brush with autocracy in the November midterm elections when Democrats exceeded expectations and, in key positions in several battleground states, defeated Republicans who denied the results of the 2020 election. For now, presenters and activists said, democracy was winning in America.

That contrasted with J Street’s attitude toward recent developments in Israel, which many speakers characterized as a democracy on the brink.

“We support Israel because we cherish its declaration of independence and all of the goals that it aspires [to]. But I cannot support [Israeli Prime Minister-designate Benjamin] Netanyahu’s efforts to undermine the very aspirations of the democratic state of Israel by marginalizing, annexing and compromising the rights of Arab Israeli citizens,” Rep. Peter Welch (D-VT), who was elected in November to the U.S. Senate, said at a Monday afternoon plenary session.

Speeches and panel discussions reflected J Street’s leftward shift in recent years, from its founding as a movement focused specifically on advocating for a two-state solution to an organization now deeply entrenched in America’s progressive movement, with far broader concerns beyond the Middle East.

At the gala, J Street awarded its Tzedek V’Shalom (Justice and Peace) award to Amy Spitalnick, executive director of Integrity First for America, the organization that supported the civil lawsuit on behalf of victims of the Charlottesville Unite the Right rally; American Federation of Teachers President Randi Weingarten and former NARAL Pro-Choice America President Ilyse Hogue.

None of the women work on Israel-related issues in a professional capacity, and each brought other progressive issues from their work into speeches that touched on abortion, transgender issues, education and unions. Their remarks mirrored a more domestic policy-focused approach from J Street overall, and a move away from attempts at previous conferences to answer big questions about the future of American foreign policy.

Rep. Jamie Raskin’s (D-MD) opening keynote speech on Saturday night exemplified the shift: He issued an impassioned message about the importance of democracy, with only a brief discussion of issues related to Israel.

Since its founding 15 years ago, the organization has faced criticism from more mainstream pro-Israel organizations like AIPAC. During the conference, AIPAC tweeted several times: “J Street is many things, but it’s not pro-Israel.” AIPAC also criticized J Street president Jeremy Ben-Ami for failing to offer any praise of Israel in his opening night speech to the conference.

The two groups publicly sparred throughout this year’s midterm elections, with J Street attacking AIPAC’s support for Republicans and AIPAC lambasting J Street for endorsing some candidates on the far-left who have flirted with support for the Boycott, Divestment and Sanctions movement and who frequently condemn Israel.

Meanwhile, some former J Street allies on the activist left have since turned against the group, arguing that the organization’s support for a Jewish state and its opposition to BDS mean it is out of step with their movement. (J Street, which organizationally does not support BDS, has advocated against legislation that condemns it.)

At a Sunday afternoon session about J Street’s role in the progressive movement, a senior staffer at Justice Democrats — the left-wing PAC best known for helping launch Rep. Alexandria Ocasio-Cortez’s (D-NY) political career, and for supporting other “Squad” members including Reps. Rashida Tlaib (D-MI) and Ilhan Omar (D-MN) — said that many progressives would like to give J Street the cold shoulder.

On Tuesday, J Street members went to Capitol Hill for lobbying meetings with members of Congress. One of the priorities, according to a fact sheet given to activists, was educating members and their staff about the new Israeli government, which is set to comprise ministers well to the right of Netanyahu.

“We’ll be providing a briefing on these new members and understanding why it is that they’re out of sync with our values and our priorities,” Ben-Ami told reporters on Sunday.

On stage and in private conversations, J Street supporters attempted to reckon with a Jewish state that they felt had abandoned some democratic norms — they pointed, for instance, to laws being discussed in Israel that would make changes to the country’s judiciary — and voted in politicians, such as Itamar Ben-Gvir and Bezalel Smotrich, whose value systems do not align with those of liberal American Jews. Activists questioned what it means to be “pro-Israel” when they disagreed with many of Israel’s actions.

“We are seeing politicians here and there in certain ways weaponize the hope that we all have for this country in an attempt to undermine the values that all of us in this room hold so dear,” Spitalnick said on Monday night.

Another key lobbying goal for J Street was urging members of Congress to consider placing restrictions on U.S. military assistance to Israel. But Rep. Betty McCollum (D-MN), a lead sponsor of a congressional bill that would place regulations on U.S. aid to Israel, received strong applause when she was introduced on Monday night, although J Street did not ask its supporters to lobby for her bill (or for any specific legislation).

In a Sunday keynote address, Secretary of State Tony Blinken spoke about the strong bond between the U.S. and Israel, and touted Washington’s $3.3 billion in annual military assistance to Israel. He received no applause when he called that security assistance “sacrosanct.”