In a speech at J Street’s national conference, Secretary of State Tony Blinken laid out the Biden administration’s approach to Israel as Prime Minister-designate Benjamin Netanyahu forms his coalition 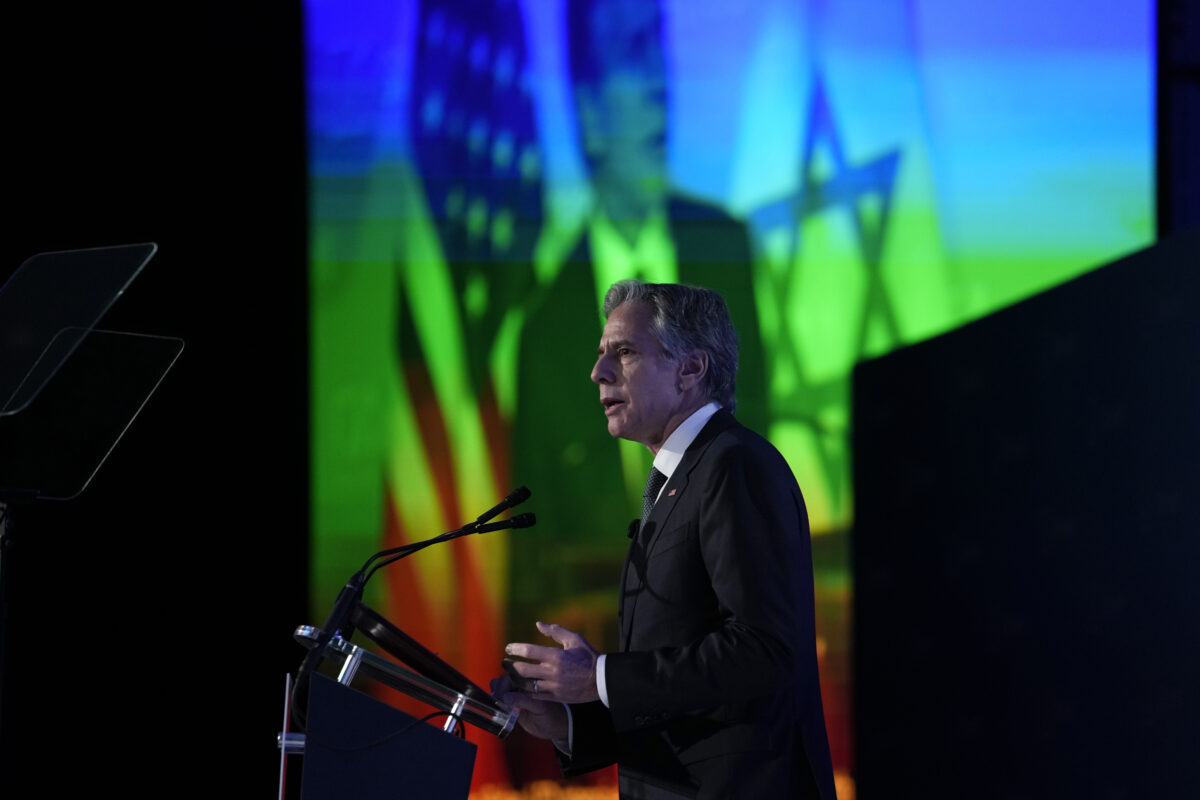 Secretary of State Tony Blinken speaks as his image in seen on a large screen behind him at the J Street National Conference at the Omni Shoreham Hotel in Washington, Sunday, Dec. 4, 2022.

Secretary of State Tony Blinken addressed J Street’s National Conference on Sunday, delivering a 30-minute speech that laid out the Biden administration’s commitment to a two-state solution, Israel’s security and expanding the Abraham Accords — and the most detailed comments yet on how the administration plans to deal with the new right-wing Israeli government.

“We fully respect the democratic choice of the Israeli people. We again congratulate Bibi Netanyahu,” Blinken said. He pledged to “gauge the government by the policies it pursues rather than individual personalities,” and also expressed a commitment to support “core democratic principles, including respect for the rights of the LGBT community and the equal administration of justice for all citizens of Israel.”

J Street has made opposition to some members of Israel’s expected incoming coalition a key focus of its three-day conference in Washington, which drew roughly 2,000 attendees at the Omni Shoreham Hotel. Speakers at Sunday’s plenary sessions warned of anti-democratic undercurrents in American and Israeli politics. A speech later on Sunday by Israeli Knesset member Ayman Odeh, leader of the the predominantly Arab Hadash-Ta’al party, said he worries “for those who speak out against occupation and apartheid, for all minorities, for my own children.” It is difficult, Odeh added, “to overstate just how dangerous this moment is.”

Blinken’s wide-ranging address, the keynote of Sunday’s programming, underscored the Biden administration’s preference for diplomacy in the Middle East — in resolving the Israeli-Palestinian conflict and stopping Iran’s nuclear program. He expressed support for the women-led protests in Iran but did not describe a change in U.S. policy vis-a-vis nuclear negotiations.

“The regime’s actions have only deepened our conviction that Iran must never be allowed to acquire a nuclear weapon,” said Blinken. “We continue to believe that the best way to ensure this is through diplomacy.” Top American and European diplomats have in recent months repeatedly said that prospects for a deal remain dim.

Blinken received the most applause when discussing the two-state solution, long a cornerstone of J Street’s advocacy and U.S. policy. The Biden administration has sought to emphasize its support for a Palestinian state and the Palestinian people, and called out hostile actors — both Israeli and Palestinian — who undermine that goal through violence.

“Anything that takes us away from two states is detrimental to Israel’s long-term security and its long-term identity,” said Blinken. “The prospects of a two-state solution feel remote” at the moment, he added, so Washington’s goal is “preserving a horizon of hope.”

In the meantime, he argued, Palestinian and Israeli leaders must work to improve the lives of Palestinians through expanding employment opportunities, strengthening civil society, building trust at the grassroots level and reforming the Palestinian Authority and its tendency toward corruption.

J Street, a vocal critic of former President Donald Trump, celebrated President Joe Biden’s victory in 2020. But the advocacy group and the Biden administration differ in their approach to some Israel-related issues.

Blinken spoke at length about the Abraham Accords, the 2020 Trump-brokered normalization agreements between Israel and the United Arab Emirates, Morocco, Bahrain and Sudan. “One of the most effective ways to bolster Israel’s security is to deepen diplomatic relations with more of its neighbors and with countries around the world,” he said. “That’s why we’ve worked relentlessly to advance and expand the Abraham Accords.”

J Street has only tepidly embraced the Accords, and Blinken’s comments on pursuing normalization were met with little applause. The crowd cheered, however, when he spoke about the Accords’ limitations with respect to resolving the Israeli-Palestinian conflict.

“For all of its benefits, normalization between Israel and its neighbors is not a substitute for building peace between Israelis and Palestinians,” said Blinken. “Israel’s growing integration and broad-based opportunities it creates – this is something that we can leverage to improve the lives of Palestinians in the West Bank and in Gaza.”

In a lobbying blitz on Tuesday, when J Street activists are set to meet with members of Congress on Capitol Hill, one of their priorities will be arguing that the Abraham Accords must be used to engage the Palestinians. “As this administration really tries to expand and grow regional normalization, that needs to be leveraged to actually bring the Palestinians in rather than to go around them,” J Street President Jeremy Ben-Ami told reporters after Blinken’s speech.

J Street activists will also be urging members to consider placing restrictions on U.S. military aid to Israel, a policy supported by J Street and some progressive lawmakers but opposed by the Biden administration.