changing of the guard

If the pro-Israel community wanted to create a Democratic leader for the future, we would create Hakeem Jeffries,’ former Rep. Robert Wexler said 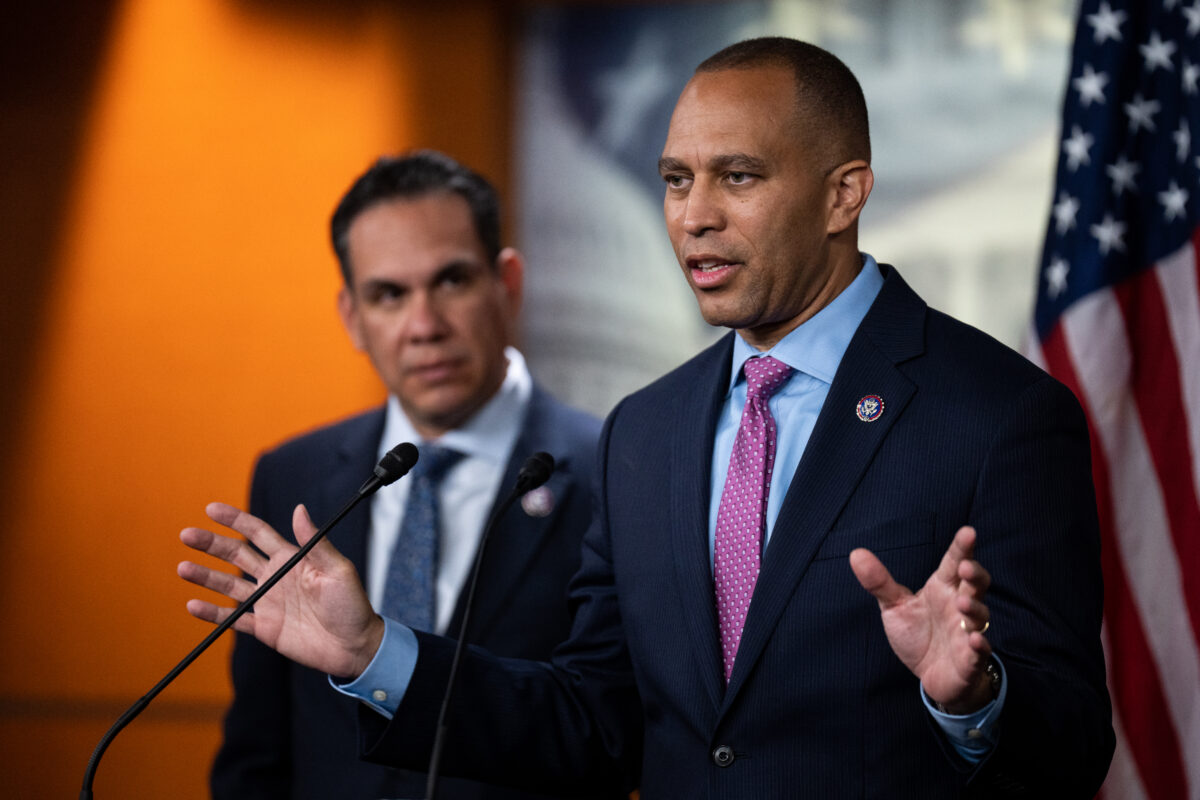 House Speaker Nancy Pelosi (D-CA) and House Majority Leader Steny Hoyer (D-MD) sent shockwaves through the political world with their announcements on Thursday that they will step down from Democratic leadership next year. But pro-Israel Democrats, who praised the two longtime Democratic leaders’ record on Israel and Jewish issues, said that the community is in safe hands with Rep. Hakeem Jeffries (D-NY) as Pelosi’s anticipated successor.

“The Democratic Party and the pro-Israel camp needs someone just like Hakeem to lead us into the future. In fact, I would say, if the pro-Israel community wanted to create a Democratic leader for the future, we would create Hakeem Jeffries,” former Rep. Robert Wexler (D-FL) told Jewish Insider. “Hakeem is not just interested in these issues, he’s devoted to them. He’s respectful of the American Jewish community. He identifies with it. And he’s just a really nice guy on top of it.”

Jeffries’ Brooklyn and Queens district includes a sizable Jewish community, including a large population of Russian-speaking Jews, and has touted the importance of the relationship between the Black and Jewish communities. Jeffries would be the first Black party leader in congressional history.

Former Rep. Steve Israel (D-NY), who served as the chair of the Democratic Congressional Campaign Committee when Jeffries was first elected in 2013, said that Jeffries is “completely consistent” with Pelosi and Hoyer on U.S.-Israel relations. Israel told JI in a 2020 interview that he was “immediately impressed” with Jeffries’ knowledge of the U.S.-Israel relationship even before he began his candidacy.

“He came to Congress as a voice of pro-Israel activism. And he served with the same voice and he has an ability to organize coalitions across a very diverse spectrum that will support U.S.-Israeli relations,” Israel said on Thursday. “So his continued leadership, assuming that the caucus comes to agreement on his candidacy, is a very positive and heartening step in the right direction for U.S.-Israeli relations.”

In addition to Jeffries’ local Jewish ties, he has also cultivated longtime relationships with figures in the national Jewish community.

Gideon Taylor, the CEO of the Jewish Community Relations Council of New York, described Jeffries as a “close friend” of the New York Jewish community. His ties with the JCRC go back “since he started in electoral politics” as a New York state Assembly member, Taylor said, when the group took him on his first trip to Israel. Jeffries has also been active on issues relating to antisemitism and hate crimes and supported funding for community safety, he added.

“It’s a wonderful thing when you have an official like him, who’s so connected both to the city and to the Jewish community, rising to the highest ranks in the Congress,” Taylor said.

“We’re very lucky to be, in all likelihood, getting him as the new leader of the Democrats in the house, because he too is a great friend of the American Jewish community and of the American-Israeli alliance,” said Norm Eisen, a former U.S. ambassador who served as a counsel on the House’s first impeachment of former President Donald Trump, who has known Jeffries for more than two decades.

Israel said he anticipates Aguilar and Clark to also “reflect the current leadership’s support for Israel.”

“I do not see any diminution of commitment and passion for U.S.-Israeli relations in the new leadership,” he continued. “What I do see is a new generation of leaders that will be around for the next 10 to 20 years that will build on the caucus’ commitment.”

As a party leader, Pelosi has often managed to keep her fractious and ideologically divided caucus together. Israel, who served for years in House Democratic leadership, said that Pelosi’s step back from leadership indicates that she feels Jeffries is a capable successor.

“I sat with Nancy Pelosi in 2012, ‘14 and ‘16 when she was considering turning the leadership over to others. And each of those occasions her No. 1 criteria for a successor was who could hold this dynamic and diverse caucus together,” he explained. “She wouldn’t be leaving the leadership today if she didn’t believe that the next generation had the skills and the ability to hold the caucus together.”

Jeffries, who describes himself as a progressive, has nevertheless found himself at loggerheads with far-left activist elements of the party, like Rep. Alexandria Ocasio-Cortez (D-NY) — who considered recruiting a primary challenger to Jeffries — and the Justice Democrats, the Sunrise Movement and the Working Families Party.

He also campaigned in person for Rep. Shontel Brown (D-OH), who was running against far-left Israel critic Nina Turner, specifically highlighting Brown’s support for Israel in a stump speech to a largely Jewish audience.

Pelosi, the first female speaker of the House, and Hoyer both built records as reliable voices in defense of the U.S.-Israel relationship during their combined decades in Democratic leadership, forging close ties with Jewish and pro-Israel Americans.

“Speaker Pelosi has a legacy decades long of staunch support for Israel,” former Wexler told JI, “for an unbreakable bond between the United States and Israel, and a devotion to the American Jewish community that could not be greater.”

Wexler applauded Pelosi’s work both on shepherding through funding bills to support security cooperation and having “kept the Democratic caucus united in support of a staunchly pro-Israel set of policies, even though there are obvious divisions within the caucus at times.”

Eisen praised Pelosi for “presiding over a period of expansion and great achievement in the U.S.-Israel alliance.”

“She has helped steer the majority of the Democratic Party to maintain and deepen that relationship,” Eisen continued. “She’s also been a beacon to American Jews on the issues that we care about so much, including the priority as a community that we place on social justice.”

Israel likewise praised Hoyer’s commitment to the U.S.-Israel relationship, including his tradition of leading biennial trips with members of Congress to Israel, traditionally sponsored by the American Israel Education Foundation. A Hoyer-led trip, Israel said, was his first visit to the Jewish state as a House member.

“One of Steny’s extraordinary legacies is how he organized members of Congress to support Israel with their votes as well as their voices,” he continued, predicting that Hoyer would also remain a prominent pro-Israel voice in the House despite stepping back from leadership. Hoyer said he plans to seek a seat on the Appropriations Committee, which controls government funding.

Wexler described Hoyer and Pelosi, longtime leadership partners, as having been “really an ideal duo for the American Jewish community.”