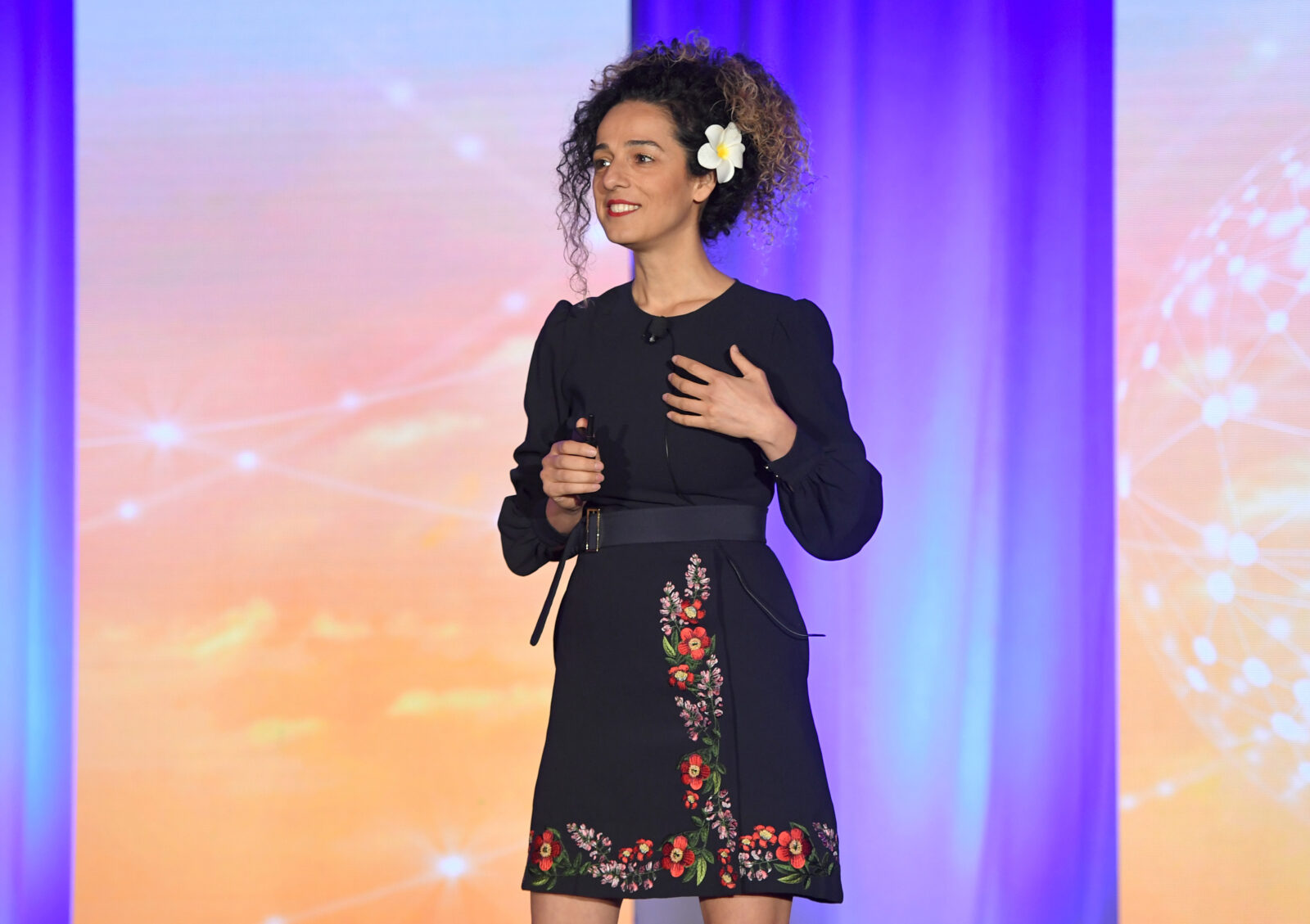 The Iranian dissident has attracted the regime’s ire for her passionate criticism of the country’s modesty laws. Now, she watches women march in the streets in Tehran while in hiding in the U.S.

Masih Alinejad is not marching with the thousands of women on the streets of Iran this week in protest of the country’s laws surrounding the wearing of the hijab. If she were, her massive curls — brown with streaks of blonde, often styled with a yellow flower behind her ear — would easily give her away.

But the Iranian-American journalist, who built her career around advocating for Iranian women who did not want to adhere to the country’s strict modesty standards, is stuck inside a safe house in the U.S. She has not been to Iran in more than a decade.

In July, a man with an AK-47 was arrested outside of Alinejad’s home in Brooklyn, a year after she was targeted in a kidnapping plot believed to be orchestrated by an Iranian intelligence network.

“I’m very pleased that I’m being protected. But at the same time, it’s frustrating living in hiding,” Alinejad told Jewish Insider last week. “It’s like being in quarantine, except there is no cure for this virus. The Islamic Republic, to me, it’s a deadly virus.”

Throughout her career, Alinejad, 46, has made an enemy of the Iranian ruling regime. Her brother spent three years in prison because of their relationship, and now they’re barred from speaking; her sister had to denounce Alinejad publicly.

“There are so many things that I was like, ‘Is it worth it? Am I doing the right thing?’” asked Alinejad, who has worked at Voice of America’s Persian service and for Radio Farda, the Iranian branch of Radio Free Europe/Radio Liberty. “But at the end of the day, I know that freedom is not free, and we all should pay the price if we really care about democracy and freedom.”

Since the kidnapping attempt last year, Alinejad has racked up more than 7.7 million followers on Instagram, with another nearly half million on Twitter. Lately, she’s been posting videos from the streets of Iran, showing women removing their head coverings and protesters clashing with police.

“The huge number of Iranian community in the West, in America, are against the Islamic Republic,” said Alinejad. “It’s clear that now, Iranians inside who took to the street … they are fed up with the regime.” So far, at least five people have reportedly been killed in the protests, with dozens more injured.

People in the country send her videos knowing that anyone who communicates with Alinejad could face stiff consequences, including jail time. “But anyway, people do that. People send videos to me,” said Alinejad. “I try to give them a voice. It’s unbelievable that this is a punishable crime.”

The protests started after the arrest of a 22-year-old woman named Mahsa Amini for allegedly violating the hijab rule. Shortly after her arrest, Amini died in police custody in Tehran. Officials said she suffered a heart attack, but others speculated — after seeing photos that showed her head bruised and bloody — that she suffered a concussion due to head injuries.

Here in the U.S., Alinejad defies easy political characterization. She is loudly opposed to the proposed nuclear deal with Iran, saying it ignores the country’s human rights violations, which has earned her plenty of conservative friends. (She supported the deal in 2015 until she saw that it didn’t improve human rights in the country.) She also criticizes progressive women who she thinks should be more vocal about Iranian women forced into wearing the hijab. “The Western feminists call the hijab part of your culture, and they don’t get it. We don’t have a choice. This is not our culture. This is a barbaric law when you don’t have a choice,” said Alinejad.

But five years ago, Alinejad also showed up to the Women’s March the day after former President Donald Trump was inaugurated. “I was so proud of myself, just holding a sign criticizing President Trump,” she recalled. “I remember, I gave a call to my husband and I said, ‘I cannot believe this is the first time in my life I’m taking to the street, nobody beat me up, nobody killed me. No one attacked me.’ I’m just happy shouting, ‘My body, my choice.’”

But as Alinejad sees it, American women’s support for bodily autonomy has limits. She pointed out that female American officials will usually don a headscarf to meet with Taliban officials. This week, when “60 Minutes” anchor Lesley Stahl interviewed Iranian President Ebrahim Raisi, she covered her hair. (“I was told how to dress, not to sit before he did and not to interrupt him,” Stahl told viewers. It was Raisi’s first interview with a Western reporter.)

To Alinejad, none of this is about politics. “They were trying to kidnap me when Trump was in power, but do they stop their terrorism? No. When Biden is in power? Not at all,” she said. “I see myself in a battle, which is not a fair battle, with the Islamic Republic, with the Taliban, with Islamic ideology, with Islamic terror, that I need to get support from both sides. I need them to understand that when it comes to a terrorist organization, a terrorist regime, you should see this as a bipartisan issue.”

Being so outspoken has at times made Alinejad suspect in the eyes of Western journalists, for whom objectivity, not activism, is the ultimate goal. “Sometimes I get bullied by some so-called liberal journalists, journalists from the left, saying that you are an activist, you’re not a journalist,” said Alinejad. But what, she asked, is journalism, if not telling the stories of people who can’t speak for themselves? “I give voice to those Iranian women who do not have any voice inside Iran,” she explained.

She compared her work as a journalist — advocating against human rights abuses in Iran by shining a spotlight on them — to what Americans in the U.S. did after George Floyd was killed. “All the journalists, they took sides,” Alinejad noted. “I see my journalism as a tool for my activism for human rights, for women’s rights, for our basic rights.”

Judging by her social media posts, which are mostly written in Farsi, Alinejad’s audience is the Iranian diaspora. It frustrates her that American outlets usually only cover Iran in the context of nuclear negotiations. “This is a topic in Washington, D.C., but for Iran, it’s not about nuclear deal. It’s about their daily life and their struggle,” she pointed out.

Alinejad appears regularly on American news broadcasts. She’ll speak to most groups who want to hear what she has to say. Last month, she gave an interview to Kan, Israel’s public broadcaster.

“I would love to go to Israel one day,” she said. As a kid growing up in Iran, Alinejad and her classmates were made to burn American and Israeli flags — the two countries Iran has called “Great Satan” and “Little Satan,” respectively.

Alinejad has partnered with American Jewish organizations who also work on the Iran issue due to their support for Israel. In June, the American Jewish Committee honored her with its Moral Courage Award.

The Jewish community was the “first victim of the Islamic Republic,” Alinejad said. “When they were oppressed, and we kept silent, we didn’t know that Islamic Republic would come after us. And now, this is a lesson for many Iranians.”

She reflected on the Iranian regime’s persecution of Jews in a manner reminiscent of German pastor Martin Niemöller’s post-World War II commentary on the Nazis. “First they came for the socialists,” he wrote, “and I did not speak out — because I was not a socialist.”