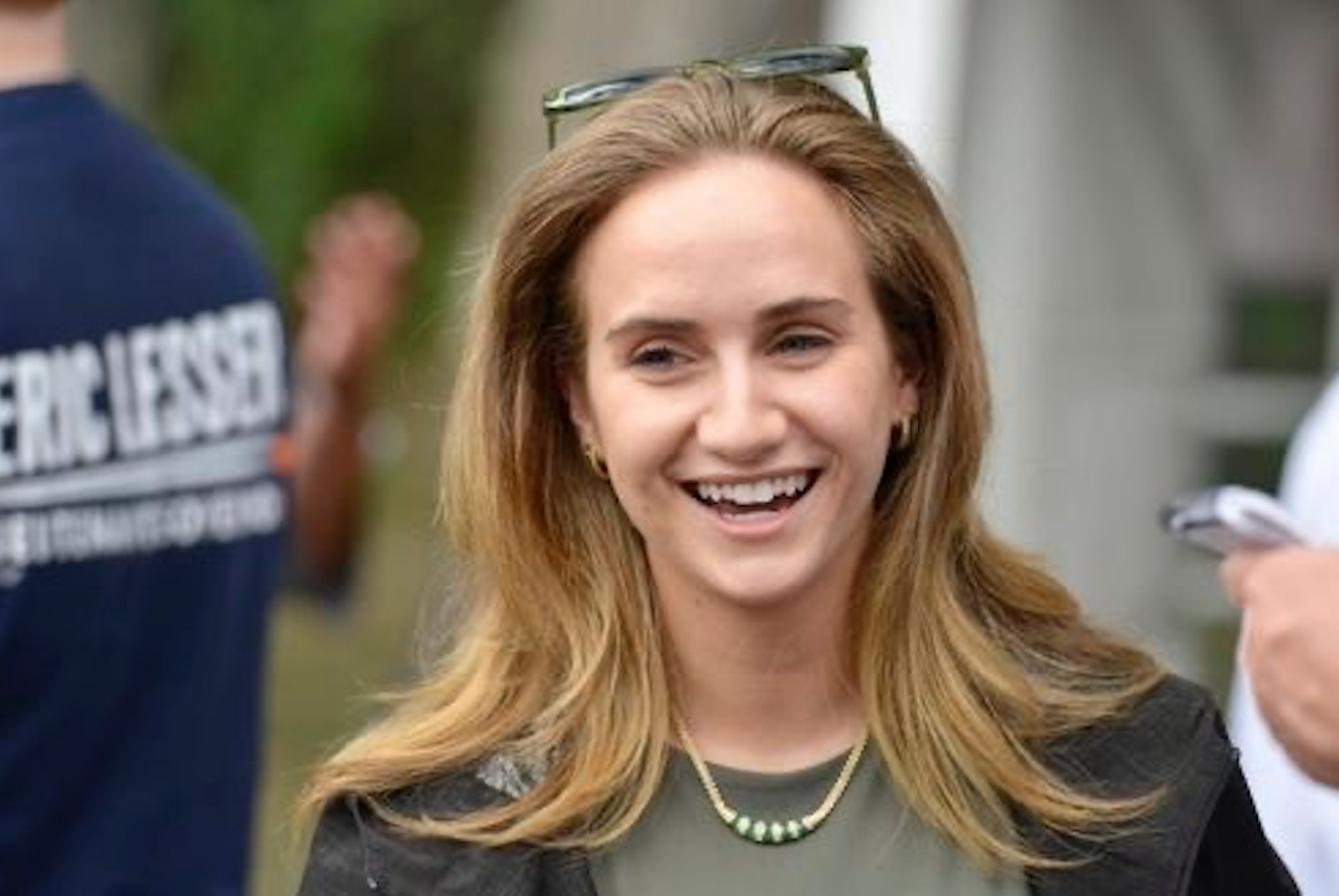 Sydney Levin-Epstein says she found her voice in politics advocating for the U.S.-Israel relationship while in college

Growing up in Western Massachusetts, Sydney Levin-Epstein had a unique weekend routine. Each Saturday morning, she went to Shabbat services in Springfield, a nod to her father’s religion. When the service ended, she would wait with her rabbi for her parents to pick her up and take her to Irish dance classes — a hobby inherited from her mother’s culture.

Now, after several years away in Washington, D.C., the 27-year-old Levin-Epstein is back in her hometown of Longmeadow, Mass., mounting a bid for the Massachusetts state Senate.

“Being raised in a Jewish household with Irish practices gave me this brutal and relentless attitude to life. I really can handle anything,” she told Jewish Insider over coffee in Boston, the city where Levin-Epstein hopes to work — and to disrupt — as a politician from the oft-forgotten western part of the state.

Levin-Epstein, a Democrat, hopes to follow in the footsteps of Eric Lesser, her longtime neighbor and the district’s current state senator, who bowed out of his seat to run for lieutenant governor in the Bay State’s Sept. 6 primaries. Lesser, who also grew up heavily steeped in the Jewish community around Springfield, was first elected at age 29.

When Lesser told her late last year that he was considering running for statewide office, Levin-Epstein began to consider making a run for the seat. But it took strong encouragement from a mentor for her to actually run, advice that made her face her fears of being a young woman in politics, constantly questioning yourself and knowing others might overlook you, too.

“One of my mentors, who is an elected official, looked me in the eyes right before Christmas and said, ‘Younger and dumber people have done greater things,’” she recalled. “There were very powerful people in Boston who were referring to me as ‘that girl in Western Mass., who does she think she is? What is she doing?’ And I took it as fuel.” If elected, Levin-Epstein would be the youngest member of the state Senate.

Her main competitor in what’s known as the Hampden, Hampshire and Worcester District is Jake Oliveira, who was elected to the Massachusetts statehouse in 2020. Levin-Epstein has a slight edge over Oliveira in fundraising — $86,000 to his $83,000 — but both have received a slew of local endorsements. Whoever wins will face small-business owner and former Granby town selectman William Johnson in November.

Central to Levin-Epstein’s campaign is a strongly held belief that Western Massachusetts is too often forgotten by the state’s power brokers on Beacon Hill, leaving much of the state isolated from the economic and cultural power in Boston.

“Massachusetts is one of the only states in the country where our economic, entertainment and political capital is the same city,” she said. “Boston has been leading in an egocentric way of keeping everyone in the same greater area, which has caused a traffic crisis, a housing crisis and the inability to access opportunities. Western Massachusetts has what we need to solve a lot of our problems.”

For Levin-Epstein and her family, the challenges are personal. Her family owned a sporting goods store that shuttered when she was in high school due to the opening of big-box stores such as Walmart and Dick’s Sporting Goods. Her father closed the store when the family could no longer afford health insurance. He got a job as a TSA agent at the nearby Bradley International Airport in Connecticut.

“It was at that moment when I understood how policy is personal,” Levin-Epstein recalled. She wanted to go to school out of state, but needed to save money first. She spent a year at a community college in Springfield while working odd jobs that included babysitting and even a stint in a Tweety Bird costume at Six Flags New England in Springfield.

She transferred to The George Washington University after a transformative visit to the campus and, as she puts it, a memorable experience at the Foggy Bottom Metro stop.

“I have this very vivid memory of visiting GW for the first time, not really knowing anything about the school, going up the escalator, and the light caught under the awning, and I see this glow of Whole Foods, but then Pennsylvania Avenue written not too far away,” she said, referring to the famed address of the White House. “I had this moment of, ‘Oh, my god, if you go here, you can figure out how to do something.’ And what that translated to me over time was the ways in which I could become a practitioner in political science in order to fight for working families like mine.”

Levin-Epstein quickly got involved in Jewish life at GW, and in particular pro-Israel advocacy on campus. Her father had made aliyah and served in the Israel Defense Forces after he graduated from college, but “I didn’t have an appreciation of this until I started to just deepen my understanding of what it means to be a Zionist, and to be a Jewish woman in the political space,” she said.

“I found my voice by advocating for the U.S.-Israel relationship as an undergrad, and it helped me understand the political landscape through different trainings that were available to college students,” she said, noting that she spent time with the campus chapters of both AIPAC and J Street, and on the student board of GW Hillel.

Levin-Epstein has tapped into the Jewish community during her campaign. In May, she participated in a virtual fundraiser with Joe Vogel and Noah Arbit, two other Jewish state legislative candidates in their 20s who are running for office in Maryland and Michigan, respectively.

After graduating from GW, Levin-Epstein stuck around and was hired for an entry-level position working for Sen. Ed Markey (D-MA), quickly moving her way up through the Washington ranks. She later held positions on Sen. Jon Ossoff’s (D-GA) 2020 campaign, and as the finance director for the Jewish Democratic Council of America.

“She’s a very Jewish candidate. She’s not hiding it,” said Susan Weiss Firestone, a business owner and the former president of the Jewish Federation of Western Massachusetts. “I think she’s a pro-Israel progressive in the way of [Rep.] Ritchie Torres [D-NY].”

As a state senator, Levin-Epstein’s work would hardly touch on Israel. But she has been upfront about her Zionism at a time when some other progressives have shunned the label.

“My political calculus has been just to stay true to who I am, and the values that I hold dearly,” she said. “To me, if I change my identity or change who I am because of political convenience, then how can I sleep at night? I am Sydney. I am proud of the young Jewish woman I am and I am becoming and will continue to fight for the values that I have.”

Jewish communities, including in Levin-Epstein’s hometown, have expressed deep concern about the “Mapping Project,” a project from a Boston-area Boycott, Divestment and Sanctions group that suggests there are sinister or even dangerous connections between Jewish and pro-Israel groups across Massachusetts.

“It is too easy to be able to target a religious or cultural center that serves the Jewish community,: she said, calling the project “horrific.” “The fact that this information in the wrong hands can be accessed on someone’s phone, let alone another device, increases the potential for harm to be done.”

She pledged to renew funding for the state’s Nonprofit Security Grant Program, which has grown from offering $100,000 in grants in 2018 to offering a pot of $3 million, which the state Senate approved in May. The money is used for houses of worship and other nonprofits to beef up their security.

“The fact that my Jewish community is in the Mapping Project personalizes this for me,” said Levin-Epstein.

Rather than attacking her Democratic opponent, Levin-Epstein has spent the campaign diving deeply into policy. She earned the endorsement of the Massachusetts Professional Firefighters after meeting with every fire chief in the district and hearing their concerns about cancers related to firefighting, like skin cancer resulting from the chemicals in the uniforms, and pledging to offer free cancer screenings to firefighters. Massachusetts is one of the most abortion-friendly states in the country, but Levin-Epstein wants to take things further by introducing a consumer protection element, to penalize “pregnancy care centers” that do not offer abortions but, in Levin-Epstein’s opinion, deceive women into thinking they’re a full-service health clinic.

“If you were selling me a kosher hotdog, and I buy a kosher hotdog, and then you hand me a pork sausage, that’s illegal in the state of Massachusetts,” she explained. Similarly, she argued, going to a care center that says it will give you all your options but does not explain how to access an abortion is false advertising. “Instead, I am given deceptive and misguided information that pressures me out of my right to choose. That’s legal in the Commonwealth of Massachusetts. I don’t think that’s OK,” she said.

Now that she’s back in Longmeadow, Levin-Epstein has come face-to-face with some of the problems she hopes to address. Many of her friends have moved away, seeking opportunity and higher wages elsewhere; and her attempts to buy a home in the district have so far proved fruitless. But she pledged to stick around even if she doesn’t win this race, and argued she’s in this for the right reasons.

“We have to stop living in a society where candidates are celebritized,” she said. “What leads us, what drives us and what our purpose is should be of much greater significance to our lives and the way that we contribute to our communities than a long job application, which at the end of the day, that’s what running for office is. You’re asking people to hire you for a job by means of a vote. But they should be doing that by focusing on your why.”