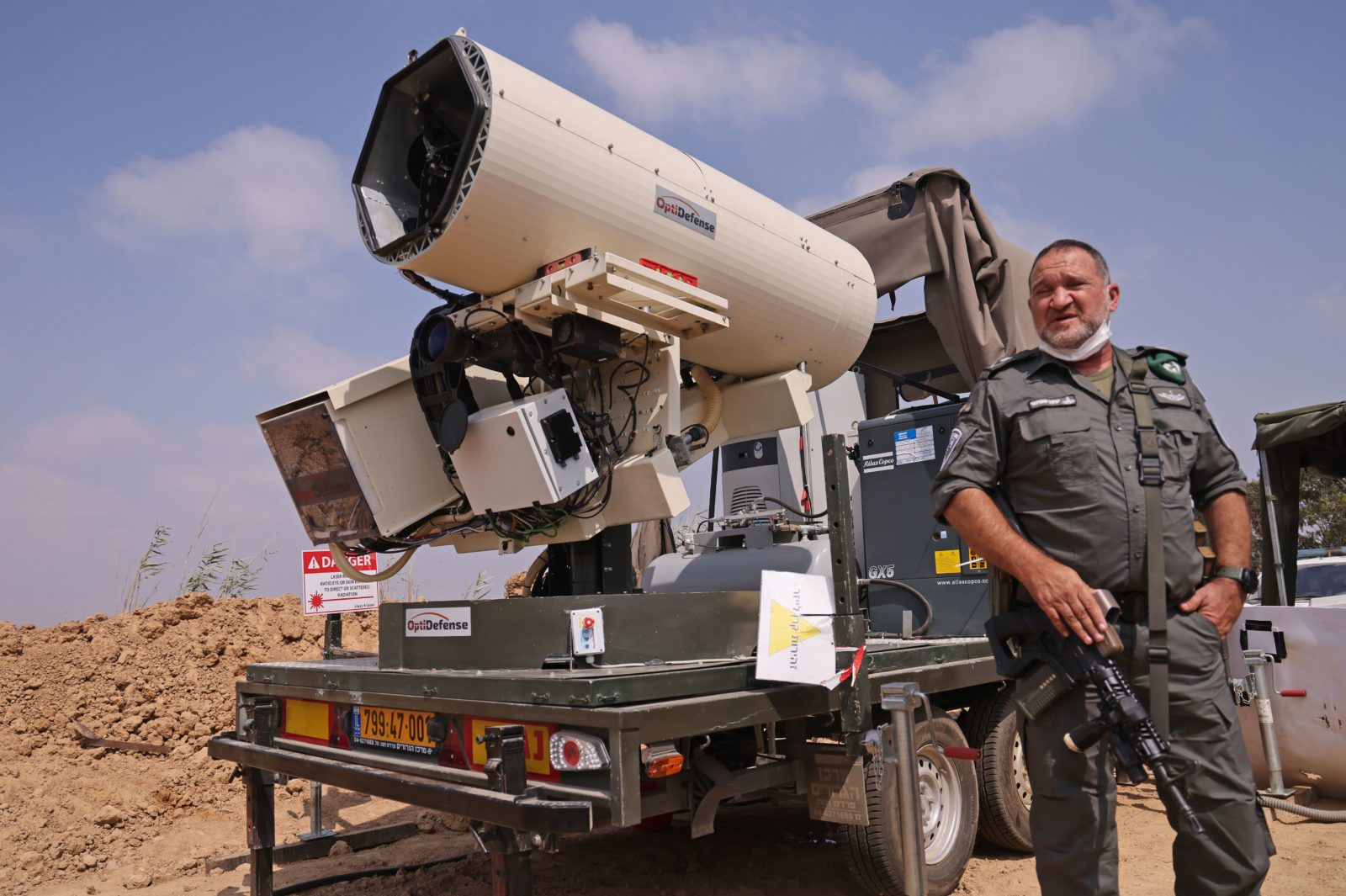 Israel is building a wall of lasers to defend against rockets. Will it work?

Israeli officials have described the technology as groundbreaking and a game-changer for Israel and the region, despite skepticism from some analysts

Earlier this month, Israel’s Ministry of Defense made a dramatic announcement – the successful test of a high-powered, ground-based laser interceptor system, able to defend Israel against UAVs, mortars, rockets and anti-tank missiles.

The April 14 announcement, which the Ministry of Defense sent out together with partner companies Elbit and Rafael, followed successful testing of a similar aerial laser system last June and was accompanied by a short video showing lots of cheers as a single laser beam lit up the night sky and sent a drone spiraling to the ground.

Smart lasers defending against the salvos of rockets that have become so familiar in recent years in Israel’s conflicts with Hamas in Gaza and Hezbollah in Lebanon would appear to be be revolutionary. Yet, those paying close attention to missile weaponry and defense systems sounded a note of caution.

Lasers, analysts and experts interviewed by Jewish Insider said, are particularly sensitive. They are severely weakened in certain weather conditions and until they are put into a real-life battle situation, it is premature to determine if they will be able to change the future of conflicts across the globe.

“It’s not a game-changer yet,” Seth Franzman, a Jerusalem-based analyst and author of Drone Wars Pioneers, Killing Machines, Artificial Intelligence, and the Battle for the Future, told JI. “It’s technology that has been worked on for many years, usually without success.”

He continued: “Once it’s operational and if they can put the technology on long-endurance drones, then we will see if it works on the battlefield.” That, he said, would most likely take a few more years.

Franzman, who also writes about Israeli defense technology for Defense News, added that he was surprised the announcement came before the system appeared to be fully tested in the field. “Usually, in military terms, promises should not be made unless the system and technology are fully there,” he pointed out. “We’ve been hearing about this for years, but how does it integrate with other systems and what type of threats does it work against?”

Both Gantz and Bennett, a former defense minister, have been touting Israel’s “laser-wall” building efforts for some time. Last June, following the successful test of the aerial laser system, Gantz said it was a “technological breakthrough” and a “milestone in the development of the multi-tier defense array of the State of Israel.”

At the annual Institute for National Security Studies Conference in Tel Aviv in February, Bennett said the entire system, including the ground system, would be ready in “about a year.”

“At first experimentally and later it will become operational,” he told the audience, highlighting that it would “break the equation” whereby Israel spends millions to defend against the cheap and crudely made rockets, drones, even incendiary balloons and kites, launched from Gaza and Lebanon by Iranian proxies that sit right on Israel’s borders.

“This will allow us, in the medium to long term, to surround Israel with a laser wall that protects us from missiles, rockets, UAVs [unmanned aerial vehicles] and other threats,” the prime minister said. “In fact, it will take away the strongest card the enemy has against us…we will have nullified the ring of fire that Iran has set up on our borders. The whole thing will no longer pay off.”

Bennett also emphasized such a defense would be attractive to Israel’s new regional allies – the United Arab Emirates, Bahrain and even Saudi Arabia – who also face threats from Iran and its proxies. “This is another way in which we will create assets, use them and give what we have to the world in order to gain support, create alliances and become even stronger,” he said.

Uzi Rubin, the founder and former director of Israel’s Missile Defense Organization and a senior researcher at the Jerusalem Institute of Strategy and Security, said Bennett was being “over-optimistic” about the prospects of a wall of lasers to seal Israel’s borders.

“Lasers have limitations,” he said, explaining how weather degrades their performance because they cannot penetrate clouds. “People think this is a country of eternal sunshine, but we have between 60 and 80 days of rain and cloud coverage and that renders this kind of weapons system unoperational.”

Rubin said that any laser-based weaponry would have to function together with Iron Dome and Israel’s other missile-defense systems such as David’s Sling, which can intercept short- and medium-range threats, and ­Arrow-3, to stop longer-range attacks.

However, he explained that unlike such mechanisms, which lock onto the target and explode them in real time, lasers take longer, needing two to three seconds to warm up, potentially slowing down the response time and making them less effective against large numbers of rockets.

“If the salvo of rockets is increased or they are heavier and longer-range, then lasers are less useful,” Rubin said. “This system will be good against drones and simple targets that do not need too much time to be disabled, but a rocket with a warhead or encased in metal, that’s another matter.”

He also questioned the assumption that it would have a financial impact, saying the guns needed to fire the lasers could be even more costly than replenishing the single-use Iron Dome interceptors.

Dore Gold, president of Jerusalem Center for Public Affairs and a former Israeli ambassador to the United Nations who has worked with Israel and the United States on developing laser defense systems in the past, said, however, that Bennett and Gantz’s “game-changer” assessment was not far off the mark.

“The main thing is to compare this laser tech with the previous technology that was tested, and what really stands out in this case is the incredibly reduced cost of each interception – it can make laser defense something which any defender can afford,” he told JI.

Gold said that when similar technology was tested in the past, there was a question of reliability – would it work in the rain or in cloudy weather – which prompted Israel to ultimately go with Iron Dome, which uses a kinetic system to knock rockets out of the sky.

Iron Dome is costly, continued Gold, with Israel spending between $80,000 per interceptor, which prompted the $1 billion push in Congress last year for additional funding to replenish the missile-defense system.

“If indeed the price per interception drops to a few dollars from being hundreds of thousands of dollars, then that’s a whole new game,” he concluded.