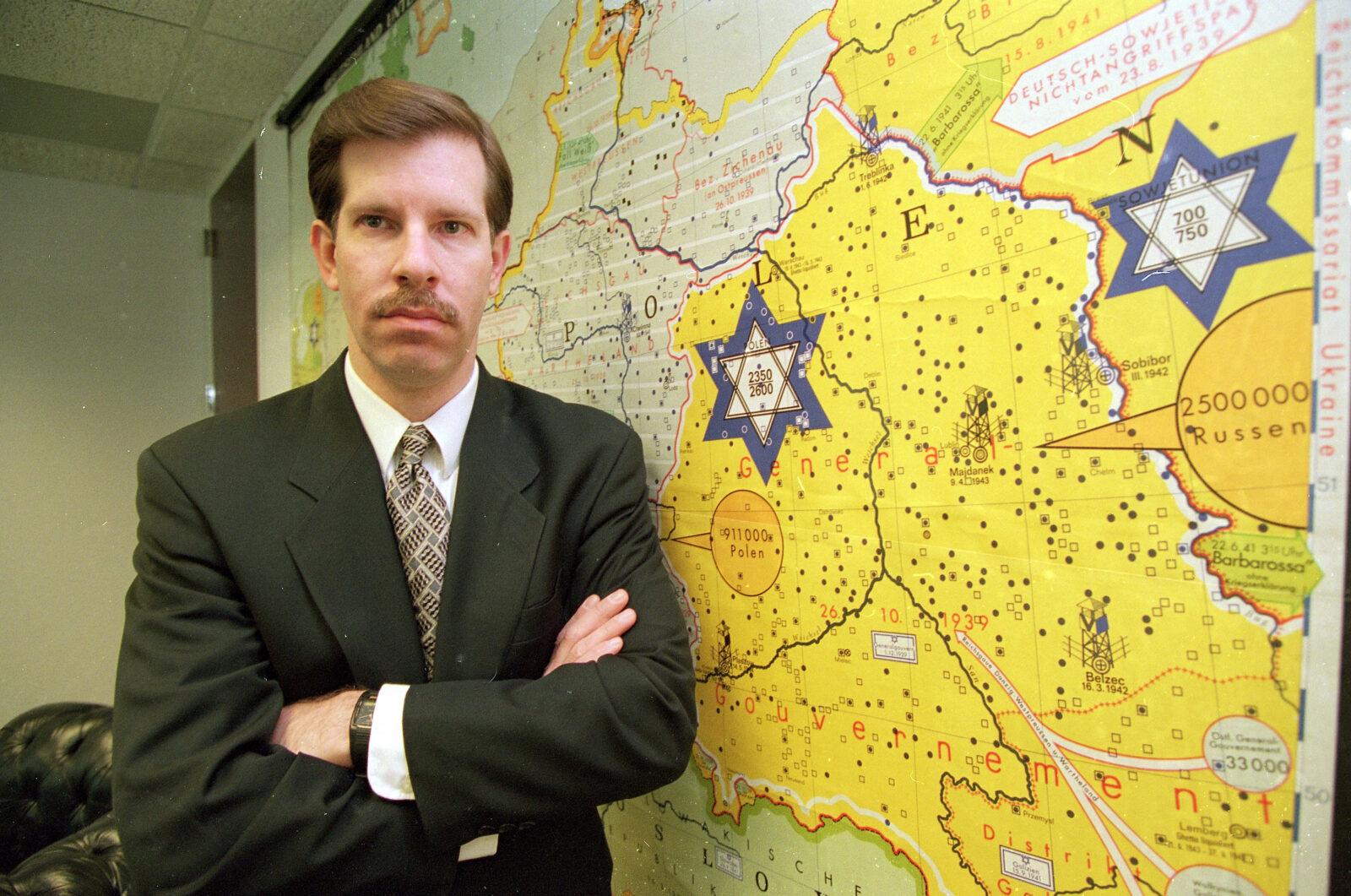 Eli Rosenbaum, the newly minted DOJ counselor for war crimes accountability, cemented his legal legacy by investigating Nazis in the decades after WWII

Eli Rosenbaum’s long career has brought him face-to-face with the “inconceivable” — twice.

Four decades ago, fresh out of Harvard Law School, he joined the Department of Justice’s famed Nazi-hunting unit, the Office of Special Investigations, which he would later go on to lead.

Now, the longtime prosecutor of atrocity crimes has been tapped by Attorney General Merrick Garland to lead Washington’s efforts to investigate Russian war crimes in Ukraine.

“Two countries that were invaded by the Nazis, one is now attacking the other — and honestly, when I hear the president of the Russian Federation refer to Ukraine as Nazis, it’s like fingers on the chalkboard for me, only a lot worse,” he continued, speaking alongside Ukrainian ambassador to the U.S. Oksana Markarova and State Department’s ambassador-at-large for global criminal justice Beth Van Schaack. “Everybody knows who’s channeling the Nazis in waging an aggressive war and committing atrocities.”

Rosenbaum achieved global celebrity in the world of international criminal justice for his inventive legal approaches to investigating and, later, prosecuting those who had committed crimes against humanity during World War II. He will bring that experience to his new role, former colleagues of Rosenbaum tell Jewish Insider.

But Rosenbaum also brings a historical — and personal — understanding of this conflict and of war crimes.

His father served in the U.S. Army during World War II, and some of the detainees he questioned during the war were later tried at Nuremberg. “I don’t know whether it led me to this work or not,” Rosenbaum told JI in 2020. “It probably played a role.” The two only once briefly discussed his father’s experience in World War II, when Rosenbaum was 14: “We never did speak about that, actually. He lived for many, many, many more decades — and we certainly talked about my work — but that was just too close to home.”

Rosenbaum, 67, first joined the Justice Department in 1980, in the brand-new OSI, an experimental Nazi-hunting unit. He has been at the department ever since, with the exception of four years in the 1980s, which he spent at a law firm and then at the World Jewish Congress. Most recently, he oversaw the department’s human rights enforcement strategy and policy on other atrocity crimes in places like the former Yugoslavia.

“I did, of course, cut my teeth, so to speak, on the Nazi cases, but I and my colleagues have been working on cases involving post-war conflicts also now for decades,” he said Tuesday.

At OSI, Rosenbaum devised unique approaches to finding evidence of Nazi war crimes, especially when much of the documentation was hidden behind the Iron Curtain.

“Most of the crimes of the Holocaust, almost all of the murders, were committed in Eastern Europe, which had come under Soviet control after the war,” said Elizabeth White, now a historian at the U.S. Holocaust Memorial Museum who worked with Rosenbaum for more than two decades at OSI. “Much of the documentation that had survived had been seized by the Red Army and was inaccessible in Soviet archives.”

Historians and prosecutors working for the U.S. government created lines of communication with the Soviets, but the Communist government did not cooperate in the way Washington hoped.

The end of an era for Nazi hunters?

“There was no free access to witnesses. They would produce the witnesses. And they chose people, of course, that fit their political interests,” said Zuroff. Meanwhile, judges in the U.S. were “very loath to credit evidence and witnesses who came from Communist-controlled countries,” said White, so investigators had to find corroborating evidence in Western archives. It was a roundabout and often frustrating process, but many of the prosecutions of Nazi war criminals who had escaped to the U.S. would not have been possible without Soviet cooperation.

Now, as counselor for war crimes accountability, Rosenbaum faces a potentially more difficult task: getting anyone in Russia to help the U.S. and its European allies as they investigate the country.

In his remarks on Tuesday, Rosenbaum urged Russians to consider their proud history of assisting the U.S. in its investigation of Nazi war criminals. (A DOJ spokesperson declined to make Rosenbaum available for an interview.)

“For anyone who might be watching in Russia, read the history. My colleagues and I were constantly criticized for collaborating with Moscow in these cases, but it was the right thing to do. We followed the evidentiary trail where it led,” Rosenbaum said, resulting in justice for both Ukrainian and Russian victims of the Nazis.

The road ahead for Rosenbaum and Ukraine’s allies in Europe will be long; investigations happen quietly, over months or years or even decades, as in the case of the Nazi prosecutions. Just last year, a Tennessee man was extradited from the U.S. to Germany after Rosenbaum and his team discovered evidence that the naturalized U.S. citizen had worked during the war as an armed guard in a Neuengamme subcamp.

“This is not something that’s going to happen in the short term. This is a long-term project,” said White. She noted, for example, the recent conviction of a former Syrian regime intelligence officer in Germany for crimes he committed in Damascus in 2006.

“People travel. So for example, you’re having some trials of Syrian regime perpetrators in Germany, because they’re there, and then their victims are there, and so they’ve been able to bring prosecutions against them,” said White. Rosenbaum will likely work to guarantee that when the people identified as Russian war criminals travel outside of Russia — which they will do, eventually — they face criminal consequences.

The German prosecution happened as a result of an unlikely coincidence: the victim of the Syrian officer recognized him at a refugee center in Berlin. With Russia, Rosenbaum will have to devote resources to talking to victims, but also to trying to figure out who within the Kremlin bears responsibility for the war crimes.

“You want to be able to prosecute the people most responsible for the worst damage. But sometimes that’s not as easy as it looks. It may not be the commander on the ground. It may be someone in Moscow, sitting in Moscow, who gave an order to carry out an attack in such a way that the collateral damage, even if he didn’t mean to kill civilians, many civilians were killed,” said Zuroff. “That person in Moscow bears the responsibility.’ Well, there’s not going to be any cooperation from the Russians. So that’s one of the difficulties he’s going to face.”

Rosenbaum acknowledged that the work will happen slowly, and under the radar — even if some of the recent actions of the U.S. and its partners have achieved worldwide attention.

“The recent seizures of superyachts through the work of the DOJ-led interagency Task Force KleptoCapture, work that we do alongside our global partners, understandably garners headlines,” he said at the USIP event. “But there is much more, much more, going on behind the scenes as we continue to use all available resources and employ cutting-edge investigative techniques to hold accountable individuals whose criminal actions are enabling Russia’s unjust and cruel war against Ukraine.”

Ukraine has already begun to try Russian soldiers with war crimes. The first case landed a guilty verdict for a Russian soldier charged with killing a civilian, resulting in a life sentence.

Charging Russians with war crimes in the American justice system is legally challenging because of jurisdictional issues, although Rosenbaum’s team will surely assist Ukrainian prosecutors, too. But the U.S. can only prosecute a person for war crimes if the victim is an American citizen.

The cases that Rosenbaum brought against Nazis did not charge them with war crimes — instead, he worked to remove Nazis who moved to the U.S. after the war, or he assisted other countries on similar extradition matters.

“Eli Rosenbaum’s experience is legend by now. I worked with him in the 1990s when I was ambassador-at-large for war crimes issues and helped him occasionally to bring Nazi perpetrators of atrocity crimes to justice, including one who had fled to Argentina and needed to be brought to justice in Croatia,” said David Scheffer, a senior fellow at the Council on Foreign Relations. “He is the consummate professional and his decades of experience hunting Nazi war criminals and ensuring they no longer live freely in the United States prepare him well for the challenge ahead.”

The legal logistics and questions of process, investigation and documentation will be figured out in the months and years ahead. But Rosenbaum’s goal, he said, is straightforward.

“We have a clear and simple message for anyone who would even consider participating in the commission of war crimes and other grave offenses in Ukraine,” Rosenbaum said. “One word: Don’t.”