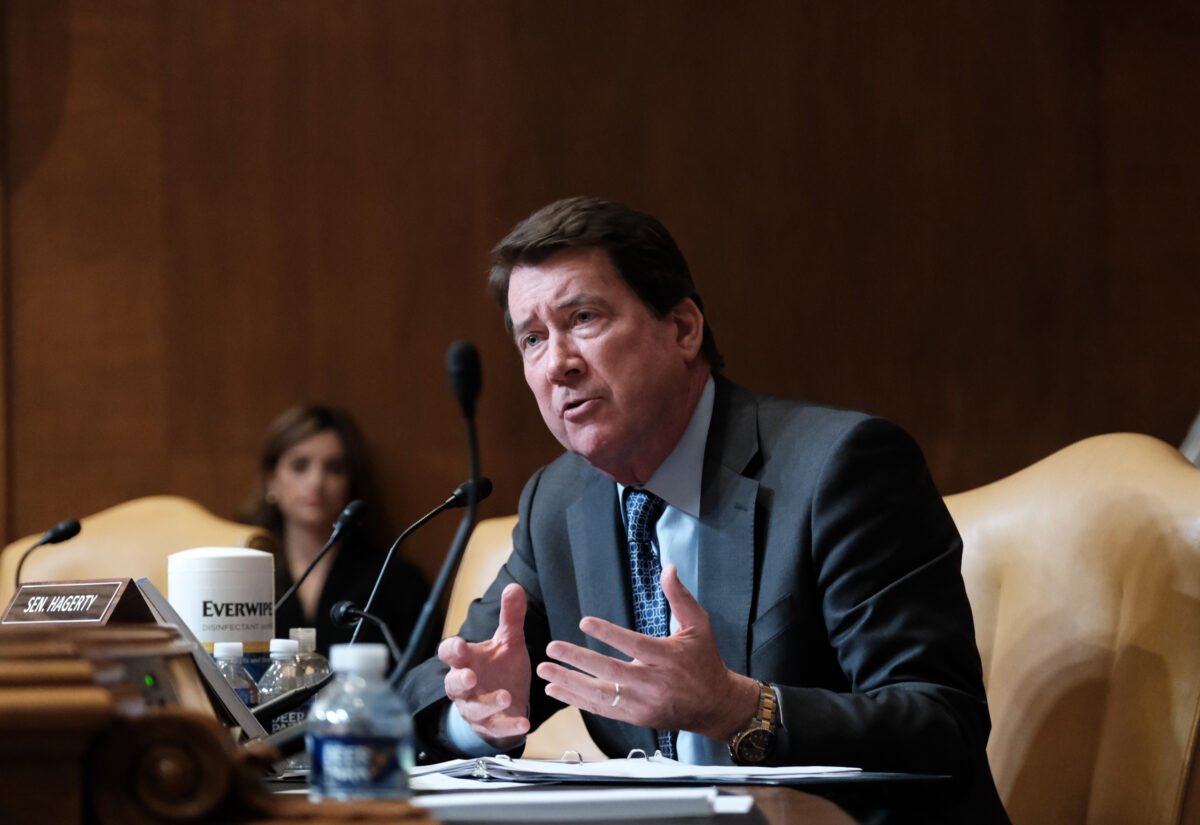 Sen. Bill Hagerty (R-TN) speaks as Secretary of State Tony Blinken testifies during the Senate Appropriations Subcommittee on State, Foreign Operations, and Related Programs hearing at the US Capitol on April 27, 2022, in Washington, D.C.

Republican lawmakers and former Trump administration officials are criticizing the Biden administration’s plan to upgrade the Palestinian Affairs Unit in the U.S. Embassy in Israel to a separate office reporting directly to the State Department, calling the move a de-facto effort to divide Jerusalem.

In a statement set to be released on Thursday, organized by Sen. Bill Hagerty (R-TN) and Rep. Lee Zeldin (R-NY), 35 senators and 56 House members will argue that the administration’s move “undermines our nation’s recognition of Jerusalem as Israel’s capital and signals support for dividing Jerusalem.”

When the Trump administration moved the U.S. Embassy in Israel to Jerusalem in 2019 and subsequently closed the Jerusalem consulate that had historically served the Palestinians, it folded the diplomatic mission into a Palestinian Affairs Unit at the embassy, reporting to the U.S. ambassador to Israel, rather than directly to the State Department, as it had done previously.

The Biden administration — stymied by Israeli resistance to efforts to reopen the consulate — moved earlier this month to redesignate the Palestinian Affairs Unit as the Office of Palestinian Affairs, and gave it a direct line to Foggy Bottom independent of U.S. Ambassador to Israel Tom Nides.

The congressional statement, obtained by Jewish Insider, called the move “alarming” and described the mission as “what amounts to be a separate U.S. diplomatic office to the Palestinians in Israel’s capital.”

“This decision is wholly inconsistent with the Jerusalem Embassy Act of 1995 that Congress passed into law and has repeatedly reaffirmed with overwhelming bipartisan support over the years,” it continues. “Let there be no misunderstanding: this unprecedented arrangement… is an effort to open an unofficial and de facto U.S. consulate to the Palestinians in Jerusalem. In fact, the Biden Administration admits this decision is one step closer to opening an official U.S. consulate, a plan it refuses to stop pushing despite the Government of Israel’s adamant opposition.”

“The Biden Administration’s decision is wrong and not how America should treat Israel, one of our closest allies in the world,” the lawmakers wrote.

Former Secretary of State Mike Pompeo, who served in the Trump administration, offered a similar criticism.

“The Biden administration’s attempt to open a Palestinian consulate in Jerusalem is unlawful, divisive and blatantly disrespectful to the state of Israel,” Pompeo said in a statement to JI. “This decision will only further incite violence in the region and embolden Palestinian terror groups funded by the Iranian regime. Congress should do everything in its power to oppose this shameful course of action.”

A State Department spokesperson told JI that the office continues to be led by the same official, George Noll, that it “operates administratively under the auspices of the U.S. Embassy in Jerusalem” and that its “personnel remain under the authority and security responsibility of the Ambassador as Chief of Mission in Jerusalem.”

“The new OPA reporting structure is designed to strengthen our diplomatic and public diplomacy engagement,” the spokesperson continued. “The ambassador fully supports this policy and believes this new structure will strengthen our diplomatic reporting and public diplomacy engagement. The United States maintains our recognition of Jerusalem as Israel’s capital and will keep our embassy to Israel in Jerusalem.”

Former U.S. Ambassador to Israel David Friedman, who also served in the Trump administration, echoed the arguments made by the lawmakers and Pompeo, saying the “decision wrongfully is designed to divide Jerusalem.”

“Here are the relevant and undisputed facts: The United States recognizes Jerusalem as Israel’s eternal undivided capital as mandated by the Jerusalem Embassy Act of 1995, and no other nation has a capital in Jerusalem,” Friedman said in a statement to JI. “Thus, the attempt by the State Department to establish direct diplomatic ties with the Palestinians through the subterfuge of an Office of Palestinian Affairs’ in Jerusalem that reports directly to the State Department in Washington, D.C. is entirely inconsistent with established, bipartisan U.S. law, and a deliberate effort to walk back important and successful U.S. policy.”

Many of the lawmakers who signed the statement made similar claims that the Biden administration’s efforts to reopen the consulate in Jerusalem would violate the 1995 Embassy Act, which directed the president to relocate the U.S. embassy from Tel Aviv to Jerusalem.

That instruction was repeatedly waived until former President Donald Trump relocated the mission in 2018. The legislation requires that “Jerusalem should remain an undivided city” and “should be recognized as the capital of the State of Israel” but has no specific provision barring the operation of any other diplomatic facility in Jerusalem.

Aaron David Miller, a senior fellow of the Carnegie Endowment for International Peace, argued that the Biden administration’s decision does not violate the Embassy Act.

“This is an effort… to create as many different sorts of minefields or build walls around these principles to try to preempt and constrain the administration from doing things that would, in fact, not violate the Embassy Act, but violate Republican political principles,” Miller said.

He characterized the congressional statement as part of a broader GOP effort to assert that Republicans are “the go-to party when it comes to Israel.”

He noted that, during the 25 years between the passage of the Embassy Act and the closure of the Jerusalem consulate, “no one ever raised” the idea that the still-existing consulate violated the Embassy Act, adding that if Congress ever sought to challenge the administration’s move in court, “Congress would lose on this.”

Miller noted that the U.S. consulate in Jerusalem serving the Palestinians had always reported directly to the State Department, independent of the U.S. ambassador, prior to the Trump administration, pushing back on the Republicans’ assertions that the current arrangement is “unprecedented.”

Eugene Kontorovich, director of the Center for the Middle East and International Law at the Antonin Scalia Law School at George Mason University, characterized the administration’s efforts to establish a diplomatic mission to the Palestinians — first via the consulate and now via the Office of Palestinian Affairs — as an effort to “quietly walk back, partially walk back, the recognition of Jerusalem.”

Alyza Lewin, president of the Louis D. Brandeis Center for Human Rights Under Law, who argued a case related to U.S. recognition of Jerusalem in 2014, told JI that the Palestinian Affairs Unit will “effectively be a consulate to the Palestinians in the heart of Jerusalem.”

Both Lewin and Kontorovich argued that a mission to the Palestinians would be more properly located in Ramallah.