Republicans have argued that reopening the consulate, which has traditionally served Palestinians, would undermine Israeli sovereignty over Jerusalem 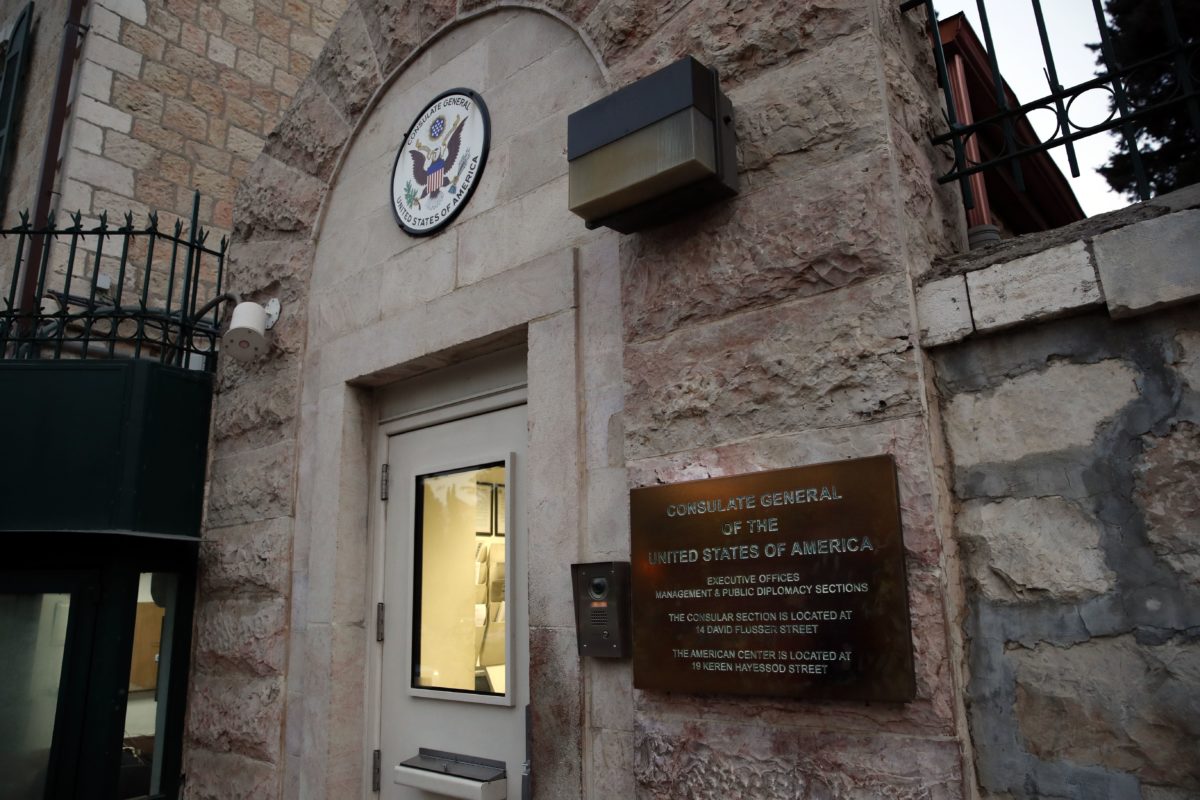 A picture taken on October 18, 2018 shows the entrance to the US Consulate in Jerusalem.

Thirty-five Republican senators introduced a bill on Tuesday that aims to block the Biden administration’s plans to reopen the U.S. consulate in Jerusalem that served Palestinians.

The Trump administration shuttered the consulate in 2018, the same year it moved the U.S. Embassy from Tel Aviv to Jerusalem. Some Israeli officials and Republican politicians argue that reopening the consulate would undermine Israeli sovereignty over Jerusalem and open the door to a potential division of the city.

The bill, led by Sen. Bill Hagerty (R-TN), would make it U.S. policy not to open or reopen any diplomatic facility in Jerusalem other than the U.S. Embassy, and would prohibit U.S. funds from being used to open any such facility.

“President Biden continues to push forward his inflammatory plan to establish a second mission in Israel’s capital city of Jerusalem — one for the Israelis and a second one for the Palestinians,” Hagerty said in a statement. “It is regrettable that the Biden Administration insists on making moves that divide the United States and Israel… The Trump Administration kept its promise to move the U.S. Embassy to Jerusalem, the eternal and indivisible capital of the Jewish State, and Congress must do everything in our power to strengthen our posture.”

The bill, titled the “Upholding the 1995 Jerusalem Embassy Law Act of 2021,” is framed as protecting the Jerusalem Embassy Act of 1995, which directed the president to relocate the U.S. Embassy in Israel from Tel Aviv to Jerusalem. Successive presidents waived the timetable set out in that law, until former President Donald Trump executed the move in 2019.

Hagerty argued that the Biden administration’s plan “violates” the 1995 law. While the 1995 law sets U.S policy that “Jerusalem should remain an undivided city in which the rights of every ethnic and religious group are protected” and that “Jerusalem should be recognized as the capital of the State of Israel,” it contains no specific provision barring the operation of any other diplomatic facility in Jerusalem.

Earlier this year, the Senate voted 97-3 in favor of a Hagerty-led amendment barring the U.S. from moving the embassy out of Jerusalem or downgrading its status; the Biden administration has said it has no plans to do either. There has been no public opposition from Democratic senators to a potential reopening, seemingly dooming the legislation.

Aaron David Miller, a senior fellow at the Carnegie Endowment for International Peace, suggested it was “a stretch” to argue that reopening the consulate violates the 1995 law. Miller said “there may be a handful” of Democrats who ultimately support the legislation, but predicted most would not because, “This is clearly an effort to embarrass the administration.”

Republicans, Miller added, “want to play politics with this issue” and “see a way to make the Republican Party the go-to party on Israel.”

David Friedman, who served as U.S. ambassador to Israel during the Trump administration, praised Hagerty for introducing the bill.

“The leadership of Senator Hagerty and his colleagues in standing with Israel is deeply appreciated,” David Friedman, the former U.S. ambassador to Israel in the Trump administration, told Jewish Insider. “The Jerusalem Embassy Act was passed by overwhelming majorities of both Republicans and Democrats and remains the law of the land. Jerusalem must never again be divided. I urge the Biden administration to follow the law, end its divisive push to open a consulate in Jerusalem and respect Israel’s clear opposition.”

AIPAC spokesperson Marshall Wittmann told JI that AIPAC has not taken a position on the Hagerty bill but “we share its view that Jerusalem is and must always be Israel’s undivided capital. The U.S. should not challenge Israeli sovereignty and must take no action without Israel’s consent.”

Eugene Kontorovich, director of the Center for the Middle East and International Law at the Antonin Scalia Law School at George Mason University, argued that reopening the consulate would violate the “spirit” of the 1995 law.

“The [1995] act commits to recognition of Israeli sovereignty in Jerusalem and support for an undivided Jerusalem,” Kontorovitch told JI. “I think [the administration] is trying to undermine the bipartisan consensus behind the Jerusalem Embassy Act by making a question mark over Israeli sovereignty over all of Jerusalem.”

Alyza Lewin, president of the Louis D. Brandeis Center for Human Rights Under Law, who argued a case related to U.S. recognition of Jerusalem in 2014, said she believes that opposition to the consulate should be bipartisan.

“Making Jerusalem the rope in a partisan tug of war would be an enormous mistake. The significance of Jerusalem to the Jewish people and its history as the capital of the Jewish homeland since the time of King David — is not a partisan issue,” Lewin told JI. “That is why the Jerusalem Embassy Act was passed with overwhelming bipartisan support. Resurrecting a fiction that does not recognize any part of Jerusalem as being in Israel will not bring the parties any closer to peace.”

Biden administration officials have recently reiterated their commitment to reopening the consulate, despite continued Israeli opposition, but have not set a clear timeline for doing so.

Miller told JI he believes the Biden team initially saw the issue as “a relatively low-cost, unentangled move that would help restore confidence with the Palestinians” and “assumed that the Israeli government would not make it as public an issue as they have.”

Given the host of domestic priorities Biden is now tackling, Miller predicted that the consulate, and any other Israeli-Palestinian issues, have shifted to the administration’s back burner.

“I just don’t think they have the bandwidth or the political currency right now to stage a fight over this consulate when in fact, it’s going to be pitched as an effort on the part of the administration to redefine Jerusalem,” Miller said. “It just boggles the mind how much this debate has deteriorated.”

Supporters of the legislation argue that the consulate is the first step in a Biden administration plan to roll back the Trump administration’s recognition of Israeli sovereignty over Jerusalem.

Last week, Hagerty spokesperson Judd Deere explained to Jewish Insider that the senator “believes that President Biden’s plan to reopen a U.S. consulate for the Palestinians in Jerusalem would undermine… recognition” of Jerusalem as the “eternal and undivided capital of the State of Israel.”

“The administration may claim this does not affect U.S. recognition of Jerusalem as the capital of Israel,” Lewin concurred, “but those statements ring absolutely hollow when Israelis and Palestinians both view it as a clear statement by the U.S. challenging Israel’s sovereignty over Jerusalem.”

“The Biden administration has given not a shred of evidence or inclination that they intend to play games with this, to reverse the decision,” he said. “I don’t see the opening of a consulate… as some sort of reconnaissance effort to set the stage for creating a Palestinian capital in East Jerusalem.”