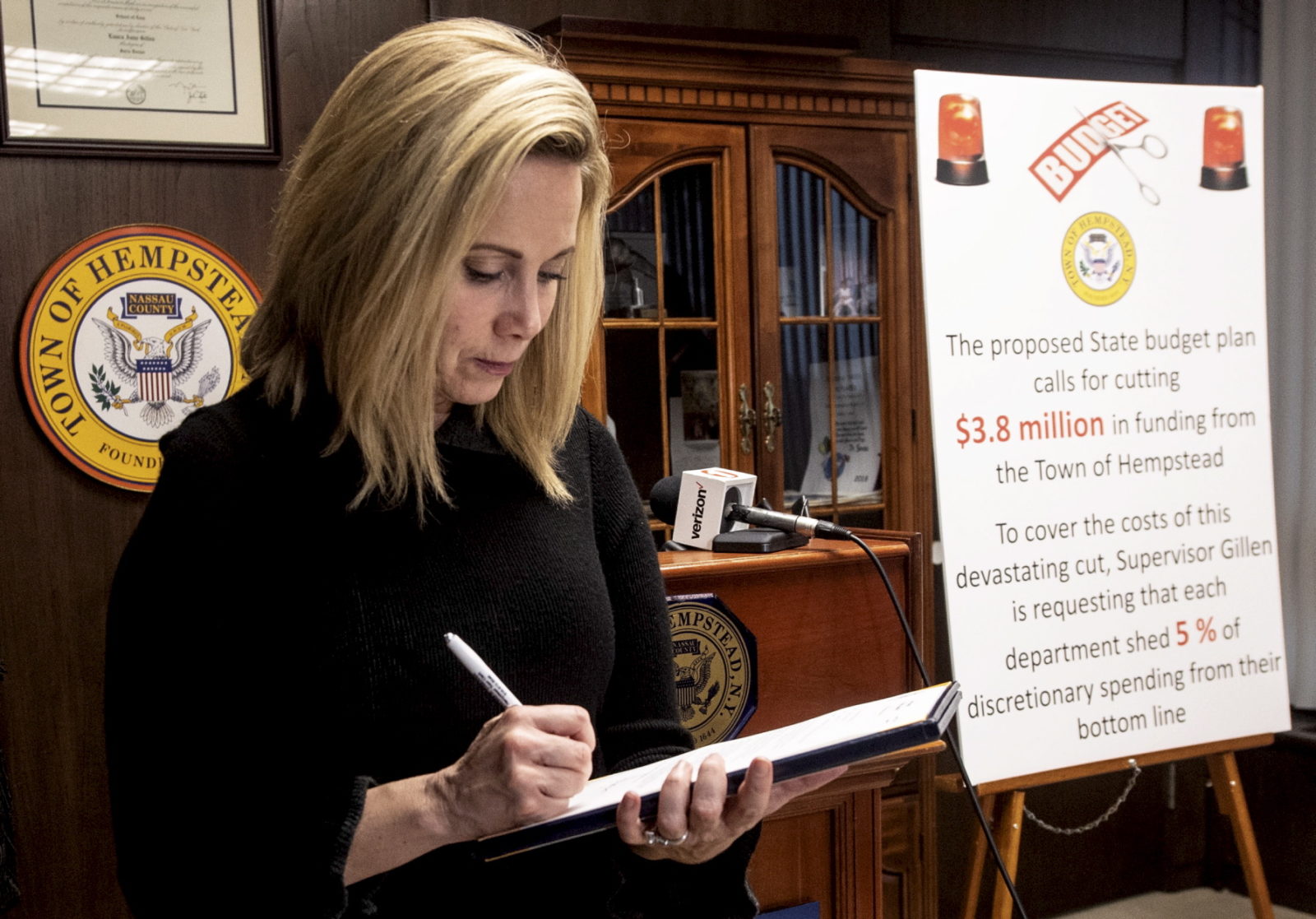 The former Hempstead, L.I., town supervisor, who is running as a ‘moderate to conservative Democrat,’ echoed the congresswoman on key issues like Israel policy and Iran

In just four terms in Congress, Rep. Kathleen Rice (D-NY) has garnered national attention as a dissident in the Democratic caucus pushing for new leadership. Her surprise announcement last month that she would not seek reelection sent shockwaves through the party, and through her Long Island district.

The first Democrat to announce a run to succeed the former Nassau County district attorney in New York’s 4th Congressional District, which includes the heavily Jewish Five Towns community, was Laura Gillen, a former Hempstead, L.I., town supervisor. She’s since been joined in the race by an array of other local officials.

Gillen’s quest to frame herself as Rice’s natural successor received a boost on Monday when Rice endorsed Gillen, saying in a statement that Gillen “has already proven her political tenacity with a strong record of getting things done,” and praising her work on women’s rights, gun safety and tax reform.

In an interview with Jewish Insider in early March, Gillen described herself as a “moderate to conservative Democrat.” She said she is eager to pursue “fiscal responsibility” and interested in joining the bipartisan Problem Solvers Caucus and building cross-party dialogue.

“I don’t believe in socialism,” she said. “I’ve been to communist countries. I know it doesn’t work.”

Gillen lost her re-election race in Hempstead to a Republican, facing criticisms of her budget and tax policies. She had been the first Democratic town supervisor in Hempstead in a century and faced frequent opposition in the role from the town government’s entrenched Republican power base.

Gillen, a lawyer who worked pro-bono with victims of domestic violence prior to her time in office, named crime — which has been a topic of debate in the state following the recent adoption of new bail reform laws — as a major focus of her campaign. Gillen linked the issue to a lack of proper mental health care.

“You see a lot of crime that is so outrageous that is being perpetrated by individuals who are mentally ill, and they either don’t have access to medication or they don’t have a support system to make sure they’re getting the medication that they need,” she said.

Improving access to mental health resources “will not only help crime” but also help deal with the “really big toll” that the COVID-19 pandemic has taken, particularly on children and the elderly, added.

Two of Gillen’s opponents in the June 28 primary, county legislators Carrié Solages and Siela Bynoe, have been vocal proponents of police reform efforts, criticizing a reform package proposed by the former county executive as insufficient. Solages also pled guilty in 2018 to two counts of disorderly conduct and was ordered to submit to drug testing amid accusations of domestic abuse.

Gillen expressed some skepticism about President Joe Biden’s failed signature Build Back Better legislation, which she said had been bogged down by partisanship and having “the whole kitchen sink in there.” She called for bipartisan compromise as a more viable path forward.

Rice made a name for herself as an occasional antagonist to Democratic Party leadership, notably opposing House Speaker Nancy Pelosi’s (D-CA) bid for the speakership after Democrats reclaimed the House in 2018.

She added that she would “try to work within the leadership in a diplomatic manner to say, ‘This is what I believe in,’ but I’m not going to compromise my principles.”

Shortly after joining the race, Gillen also received an endorsement from longtime former Rep. Steve Israel (D-NY), who represented another Long Island district in the House. Israel, a former chairman of the Democratic Congressional Campaign Committee, said that Gillen’s competitiveness in the general election was a key factor in his endorsement. 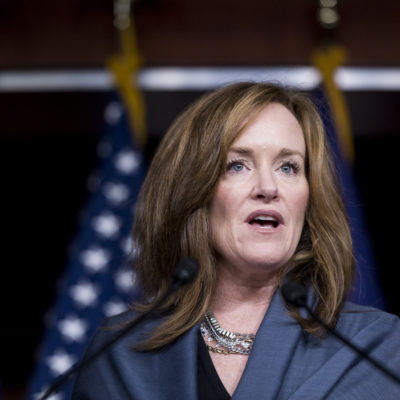 He also praised her “fearless” anti-corruption work as Hempstead supervisor.

But not everyone agrees with Israel. New York State Democratic Party Chair Jay Jacobs slammed Gillen in a recent Newsday interview, saying she “would have a very tough time winning in this congressional seat.” Jacobs had pushed her to run for the state Senate instead.

Since Gillen joined the race, Solages and Bynoe, as well as Malverne Mayor Keith Corbett — a longtime Democratic Party lawyer — have also jumped in.

Jacobs said he sees Corbett — another moderate who leads a GOP-leaning municipality — or Bynoe — who he called “a progressive, but… pragmatic — as the strongest candidates, but in an email urged donors to stay out of the race.

Gillen was also quick to make clear to JI that supporting Israel “will be at the forefront of my agenda in this campaign because I have a significant Jewish population that I would represent.”

She has traveled to the Jewish state once, 26 years ago, with an Orthodox Jewish friend she met while working at a hospice founded by Mother Teresa in Kolkata, India. Her visit came on the heels of a terrorist attack in Egypt that killed more than a dozen tourists.

“When you go to Israel, you really appreciate the threat to the people in that country,” she said, adding that if elected, she would aim to return to Israel early in her term.

She praised Israel for its civil liberties protections, including for the LGBTQ community, its business community and the humanitarian aid it provides to the world, pointing specifically to the aid it has sent to Ukraine.

“We have to really focus on making sure that Israel has the support it needs to stay strong and to defend itself,” she continued, saying she fully supports U.S. security aid as laid out in the 2016 Memorandum of Understanding.

Like Rice, Gillen opposed the 2015 nuclear agreement with Iran.

“I didn’t think it was properly constructed and it didn’t sufficiently address what we know are clearly Iran’s nuclear ambitions,” she said, pointing to the original deal’s sunset provisions and “insufficient monitoring.”

Rather than rejoining the 2015 deal, as negotiators in Vienna are attempting to do at present, Gillen called for “really, really strong sanctions” on Iran to ravage its economy, with the goal of reaching a “far more aggressive” agreement.

“The sanctions, they were effective in 2015” to bring the Iranians to the negotiating table, Gillen said. “Now that we pulled out of the deal, the Iranian government has maybe just tried to live with the sanctions. But I think the more pressure we put on their economy, the more likely we are to get them to the bargaining table.”

“[The Trump administration] had a real win with the Abraham Accords,” she said, describing herself as “motivated and encouraged” by the normalization agreements with four Arab countries.

She supports a two-state solution to the Israeli-Palestinian conflict reached through direct bilateral negotiations — ”a strong and a safe, secure Jewish state alongside a demilitarized Palestinian state.” She described aid to the Palestinians as a potential bargaining chip to bring them to the negotiating table.

Former Rep. Israel told JI that Israel policy is a major consideration in his endorsements, and he said he has been “deeply impressed” with her positions on the issue, describing her as exactly in line with his views on the subject.

Gillen said that, during her time as town supervisor, her community faced a spate of antisemitic attacks, and recalled working with local rabbis and the police department to ensure that they had increased security, as well as with Senate Majority Leader Chuck Schumer (D-NY) to ensure the community received federal security aid and resources for synagogues and nonprofits.

Steve Markowitz, a board member of the Jewish Community Relations Council of Long Island, said Gillen would be “a very strong advocate in Congress for the issues of concern to the Jewish community.”

“She forged a very close relationship with Jewish leaders in [Hempstead] and was quite involved with the whole community in the Five Towns and recognizes the issues of importance to the Orthodox community,” Markowitz, who lives outside Gillen’s district, told JI. “She really made a very strong effort to build ties, understand the issues and be supportive in any way she could.”

Recounting Gillen’s speech at an event on antisemitism several years ago, Markowitz added, “This little blonde Catholic woman got up there and she was as fierce an advocate and as concerned as the most Orthodox rabbi in the room.”

She also said that, if elected, she would take on anti-Israel factions within the Democratic Party.

“If I have to go down there and fight the Squad on this issue, I will,” she said. “Because it’s something that I believe in and it’s, quite honestly, my duty if I represent this district, which has one of the largest Jewish populations out of any congressional district.”