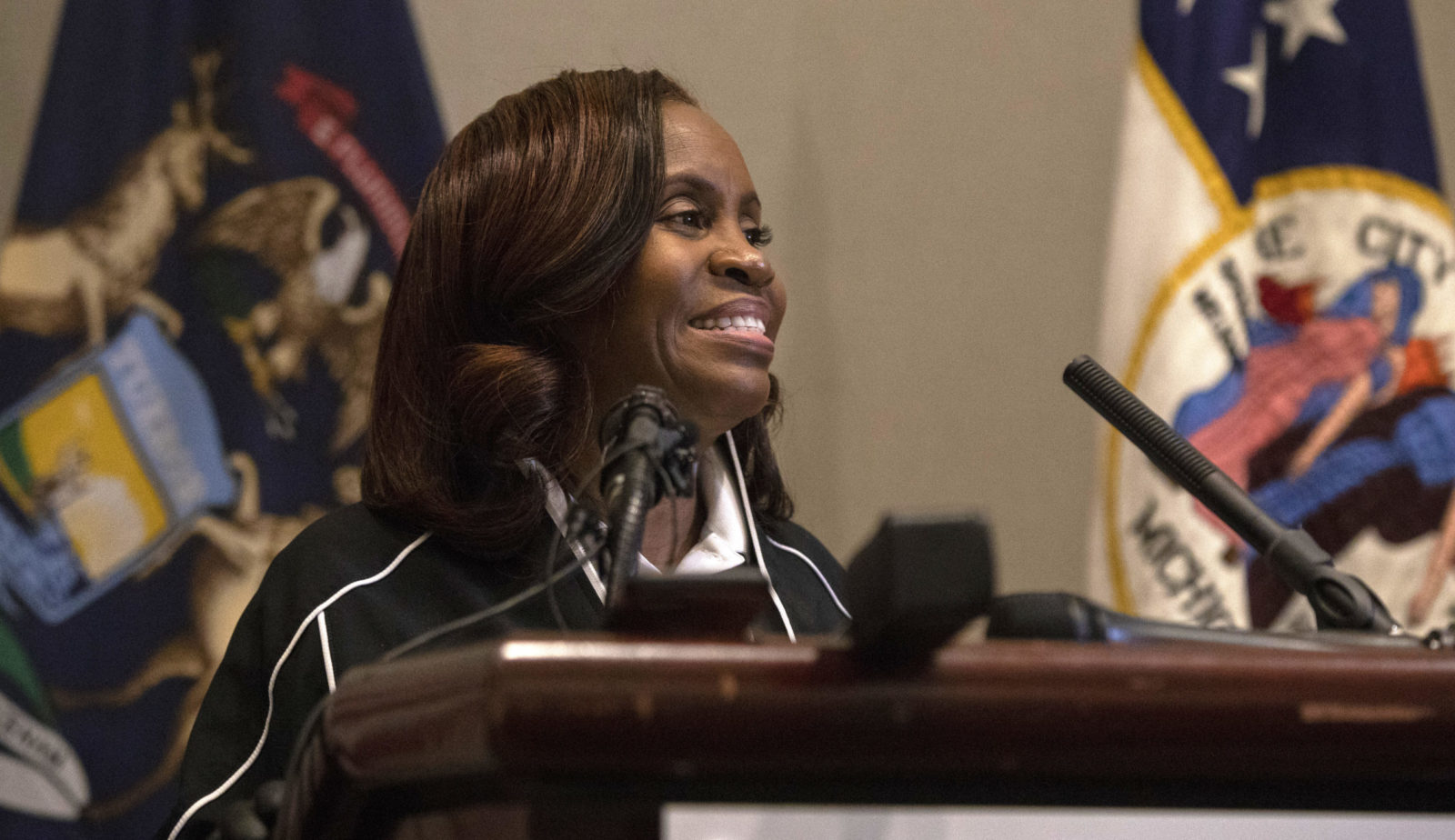 Winfrey told JI she’s pulled in $200,000 since entering the race in February

Winfrey told Jewish Insider in a recent interview that she had not been planning to run for Congress but felt the district — which includes parts of her home city of Detroit as well as a number of outlying areas — “is not being represented,” describing Tlaib’s vote last year against the bipartisan infrastructure package as “the last straw.” Winfrey entered the race in February and has since raised $200,000, she told JI.

“It appears to me that my opponent is more interested in political gain than she is in serving our constituents,” Winfrey said. “For me, that just makes my teeth itch… For you to run as a Democrat in that district and then don’t support our Democratic president, and don’t support some of the benefits that would directly benefit our community, I feel like you have another agenda. When you don’t support the one ally that we have in the Middle East, then I feel you have another agenda, and that agenda is not conducive to the citizens of the 12th Congressional District.”

Winfrey also has a large gap to fill in the money race. As of the end of 2021, Tlaib was sitting on a $1.4 million warchest, but Winfrey’s initial haul is a start, one local analyst said.

“If she’s actually raised $200,000 already, then she’s had a good first six weeks of her campaign. That’s a respectable total. She needs to raise a hell of a lot more, but if she’s actually got 200 in the bank, color me impressed and a little surprised,” Adrian Hemond, a local political consultant, told JI. Hemond led then-Rep. John Conyers’ (D-MI) campaign in 2016, when Winfrey challenged him.

“That doesn’t mean she’s going to win, but that’s at least a viability signal, and a pretty strong one, that Congresswoman Tlaib could have a race on her hands,” Hemond continued.

Hemond argued that, while Tlaib is typically successful at pulling in small-dollar donations, she has been less successful in fundraising from PACs and major donors. “If Janice Winfrey is actually doing that, then she may well have a fighting chance,” he continued.

He noted, however, that Winfrey’s campaign has lagged behind in “visibility” thus far — little earned media coverage, no active social media presence and a bare-bones campaign website. But, with $200,000 in the bank, “you can turn the spigot on that stuff pretty quick.”

For her part, Winfrey argued that she may actually hold a name recognition advantage over Tlaib in some areas of the district where Winfrey ran against Conyers in 2016. Winfrey finished that race with 39.2% of the vote, coming in more than 20 points behind Conyers, and raised just $84,000.

“I’m the only candidate that got 40% of the vote against John Conyers any time anybody has ever run against him, and I did that with virtually no money,” she said. “The 12th Congressional District — they know me, they know my work. They know I’m a hard-working, sincere public servant. I don’t do things for my own personal gain or what I think is best for a small interest group or buddies.”

The Detroit city clerk said her reputation and name recognition in the district has been boosted by hiring election workers from throughout the district.

Winfrey also bragged of a long record of successful annual elections, of being an outspoken voice against Republican questioning of the 2020 presidential election results in Michigan and of pulling off a successful November election during the pandemic.

But that record was marred by vote-counting issues surrounding the 2020 August primary, as well as longer-running concerns about slow election returns, which analysts said could be a drag on Winfrey’s campaign.

Winfrey largely blamed the COVID-19 pandemic for the issues in the 2020 primaries, suggesting that many elderly poll workers had died from the virus or stayed away, and that state stay-at-home orders complicated recruitment and training. She also accused the City of Detroit of offering up untrained workers to fill the gaps.

“That August election was not reflective of the work that we typically do,” she said. “Because of the pandemic, because we were [in a] stay-at-home order, because we couldn’t train and we had to take these poll workers from whoever the city had available to us.”

Winfrey said that her office remediated these issues for the general election and now “have a template in place for a nearly perfect election.”

During last year’s city clerk race, which she won by more than 40 points, Winfrey also faced criticisms of her tax debt of nearly $65,000, which resulted in a lien on her home. At the time, she shrugged off the Detroit Free Press report that revealed the tax debt as a political hit job and said she and her husband are on a payment plan with the IRS. Winfrey previously faced a Detroit city income tax debt in 2011, which led the city to garnish her wages.

If elected, Winfrey would play to her experience — focusing on protecting democracy and expanding voting rights. She also said that infrastructure, quality education and rising crime rates will also be priorities.

Winfrey said crime — which political analysts anticipate will be a major weakness for Democrats this November — ”needs to be handled in a better way,” and recounted that her neighborhood was locked down because of a shooting the morning she spoke to JI.

“That’s what I woke up to — and I don’t live in a bad neighborhood,” she said. “But these are the things that I have to face when I leave my house in the morning.”

She pledged to “stand by our president because now, more than ever, we need a united party… Maybe we won’t agree all the time, but certainly publicly, I will stand united with our president.”

She also said that her nonpartisan city clerk post “means that I know how to bring everybody to the table, to listen to everybody. I know how to communicate as opposed to shouting.”

The congressional hopeful emphasized her support for the U.S.-Israel relationship and military aid to Israel, as well as her opposition to the Boycott, Divestment and Sanctions movement, the latter of which is supported by Tlaib, a Palestinian-American who has been vocally critical of Israel.

“I don’t say [Israel is] a perfect country, but I do know it’s an important country to Americans. I do know that, without Israel, we’re much, much weaker and vulnerable,” Winfrey said. “So how can we not support Israel?”

“I don’t care what your dislike is with the Jewish people, you don’t just wipe out a whole country, a whole group of people — that’s never the answer,” she said. “However fancy you want to make those words so it doesn’t sound like that — but that’s what it is and that’s what you want to do… And I’ll do whatever I need to do to eliminate the likes of those who want to work and dislike the Jewish people just because of who they are.”

“You cannot hate a group of people and expect to serve a community or a nation or people period if you’re anti-anything,” she noted. “As an African American woman, it angers me to my soul that you hate another group of people just because they are… It grieves my soul and I will work against it, and I have always worked against it all my life.”

Tlaib’s campaign did not respond to a request for comment.

To protect Jews from antisemitic attacks in the United States, Winfrey said she will work to ensure that antisemitic hate crimes are properly prosecuted at the federal level and accompanied by “real consequences,” including jail time, for perpetrators.

Winfrey was only broadly familiar with the two-state solution, saying she was “not proficient” in Israel policy.

“My thing is whatever to keep Israel strong, to keep Israel as democratic country, I know I support that,” Winfrey said. “And I think that that two-state outcome might be the best outcome from what I would think it would be.”

Winfrey elaborated on her stance in a position paper provided to JI.

“We must have confidence in Israel’s ability to determine what is best for her own security and well-being,” Winfrey said. “While I support the U.S. conducting Middle East peace talks, the United States should not infringe upon Israel’s sovereign right to pursue peace accords best aligned with her national interests. The United States has a role to facilitate in peace talks, but not dictate them.”

In her paper, Winfrey condemned the United Nations and International Criminal Court, as well as the BDS movement, for “efforts… intended to weaken and delegitimize the Jewish State” and said they will “stop at nothing to compromise the shared Israeli-American values.”

Winfrey’s position paper also calls for “stronger oversight” over U.S. humanitarian aid to the Palestinian Authority, “to ensure that these funds aren’t improperly used to incite anti-American hatred and condemnation of Israel’s right to exist.”

During her interview with JI, Winfrey had declined to discuss U.S. aid to the Palestinian Authority, citing a lack of familiarity with the issue. She also refrained from discussing Iran policy, but said that Tehran “needs to be watched” and should not be trusted.

But her baseline support for Israel has earned her friends among pro-Israel advocates in the Detroit area. Joshua Tobias — a director of the Ira Kaufman Chapel, the largest Jewish funeral home in the area, and a longtime friend of Winfrey and her husband — told JI he connected Winfrey with local AIPAC activists, including former AIPAC President David Victor, who organized a recent fundraiser.

“From what I can tell, as soon as she met the folks at AIPAC they fell in love with her too and are really trying to help in any way they can,” he said. “She understands the importance of America’s alliance with Israel, and it’s become a very important subject for her as well, understanding the importance in this community — she just gets it, she really understands it. And I was very pleased with the answers that I heard from her when I talked to her.”

Tobias noted that Winfrey’s family has a personal relationship with Detroit’s Jewish community. Although they were not Jewish, her in-laws worked in local synagogues for decades and had requested Jewish funerals through Tobias’ funeral home, which is how they first met. Her children also attended pre-K at a local synagogue.

“It’s been kind of an organic development of a relationship between the Jewish community and the Winfreys,” Tobias said, adding, “The only way I can describe [Winfrey] — she’s one of my favorite people in the world. She is strong, and she is one of the kindest people I know.”