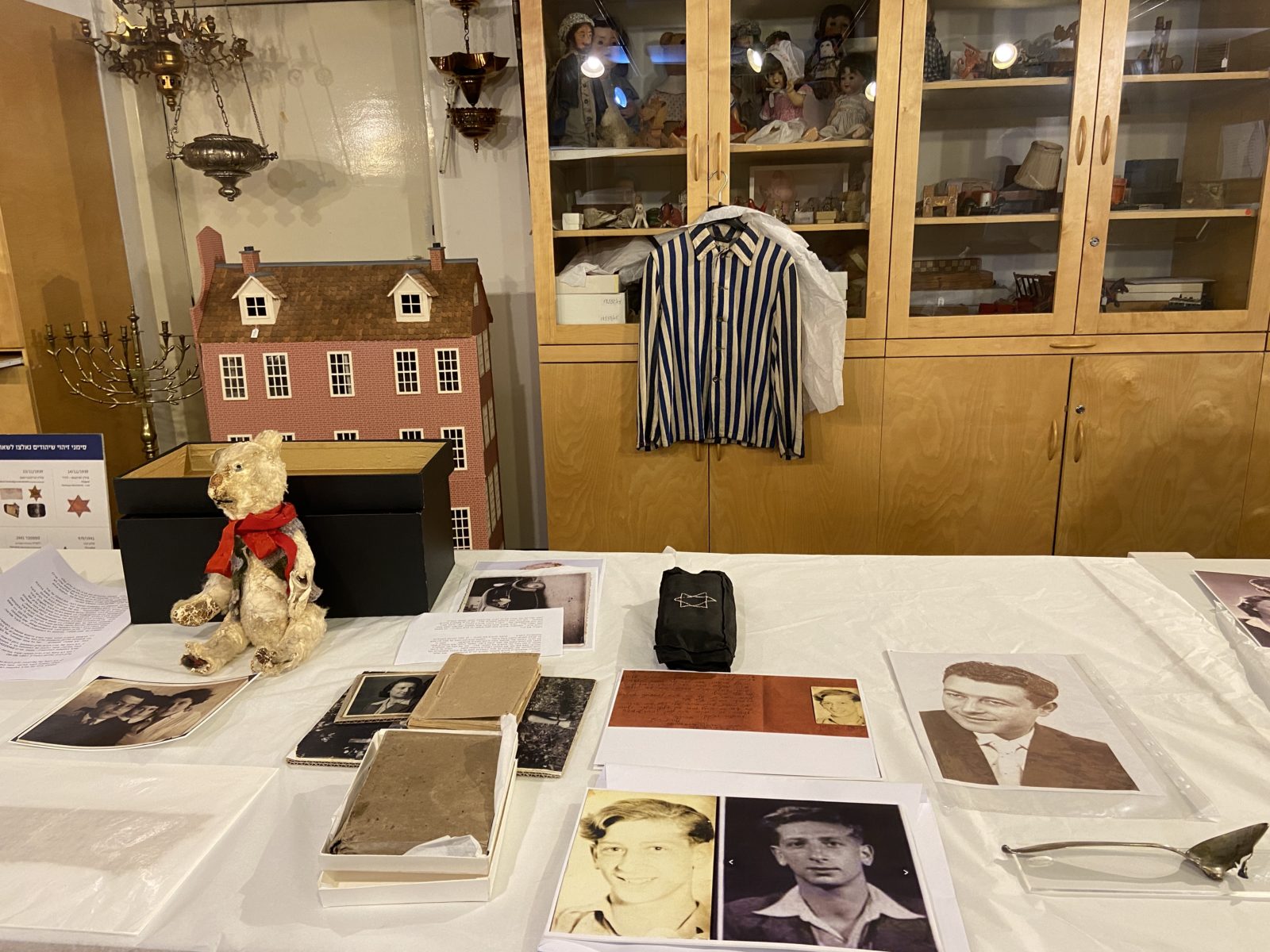 Behind the scenes at Yad Vashem

‘Gathering artifacts is only one element of what needs to be done, we also need to tell the stories behind them too,’ a museum official says. ‘That’s what makes an ordinary object so impactful, so priceless’

A moth-eaten teddy bear, a mangled silver spoon, a well-worn headscarf – all inanimate objects, yet each tells a story, in a powerful and sensitive way, of one of the darkest periods of human suffering, shedding light on both the trials and triumphs of individuals during the Holocaust.

As Israel prepares for Yom Hashoah, its annual Holocaust Remembrance Day this week, Jewish Insider was given a unique look inside the vast archives and storage vaults at Yad Vashem, the World Holocaust Remembrance Center in Jerusalem, catching a haunting glimpse into the horrifying experiences of the millions who perished and those who survived.

The archive building stands alone in the Yad Vashem complex, facing the grand Hall of Remembrance with its eternal flame, where visiting foreign dignitaries lay wreaths to commemorate the millions who were murdered. Beside it is the cobblestone plaza where on Wednesday evening Israeli officials will gather to hear the testimonies of six survivors, each of whom will light a torch to remember and collectively call for “Never Again.”

Inside the archive itself, the temperature is kept low, in an attempt to preserve the aging artifacts for future generations. Michael Tal, curator and director of the archives division, keeps careful watch over each item stored in the archive and catalogs new arrivals – a handful of objects are received each week – sent from across the globe by aging survivors or their descendants.

He is diligent about researching the backstory of everything that reaches his hands, cross-checking personal stories with the extensive list of names – Holocaust survivors and victims – kept at Yad Vashem and searching out the photographs of each item’s owner and their relatives.

“Even though I’ve been here for a very long time, I’m still surprised that we keep receiving things,” Tal told JI in an interview. “Gathering artifacts is only one element of what needs to be done, we also need to tell the stories behind them too. That’s what makes an ordinary object so impactful, so priceless.”

“When we receive an object, we try to find out as much information as we can on the person who it belonged to,” he continued, underscoring that in many ways, these belongings are as much testimony to what happened 80 years ago as the writings, artwork and photographs that are also kept at Yad Vashem.

“Every object tells a story,” Tal said, estimating that there are more than 42,000 artifacts stored at Yad Vashem, from the striped uniforms once worn by those imprisoned in concentration camps to unused stacks of yellow stars the Nazis forced Jews to sew onto their clothing, as well as long-lost precious Shabbat candlesticks, Chanukiahs (eight-branch candelabras) and other religious paraphernalia.

A handful of such items appear in the museum’s permanent display cases; others are carefully packaged up and sent around the world to various Holocaust and World War II museums for temporary or special exhibitions. Some of them are cataloged online, a virtual museum where one can discover to whom the objects belonged and their significance.

Opening a closet filled with neatly wrapped camp uniforms, Tal explained that for many survivors, such artifacts, even though they are a chilling reminder of the horrors of the past, are also a link to a lost life and lost loved ones, and a way of reminding the world of the terrible injustices to which they were subjected.

The teddy bear, for example, belonged to a Polish girl, Stella Knobel. The single child of a wealthy doctor, she received the bear for her 7th birthday in 1931. When the family fled to the Soviet Union in 1939, Mishu, the name given to the bear, was one of the few items Knobel took with her. With no siblings, Mishu became her only companion and it traveled with her, first to Siberia and Uzbekistan, then to Tehran, Iran. Both Knobel and the bear eventually reached pre-state Israel in 1943.

“Because I was an only child who very much wanted a sister and brother, the teddy is like family,” Knobel wrote when she donated Mishu to Yad Vashem for safekeeping. “He was my sister and my brother, and I clung to him. I didn’t have other toys. He’s part of my family, the last remnant of my home in Poland. I know that in Yad Vashem he’ll be taken care of.”

She added: “I thought of burying him in the garden, but I was afraid that someone would find him and get rid of him. The thought that he could be thrown in the garbage is terrible to me…it (the teddy) is symbolic of my life.”

For many survivors and their descendants, such artifacts contain both the hard truths and the happy memories of their past lives and, more importantly, tell the story of their triumph over death and their ultimate survival, Tal explained.

The mangled silver spoon belonged to Artek Poznanski, also from Poland. On his harrowing journey from ghetto to labor camp, Poznanski managed to procure the spoon, an object of great value in the camps. He guarded it closely and when he decided to escape while heading to near-certain death at the Mauthausen extermination camp, the small metal utensil saved his life. Daring to jump from a train, Poznanski was shot at by Nazi guards, but the bullet hit the spoon tucked into his pocket, wounding but not killing him. Poznanski survived, hiding out in Czech territory until the war ended.

And the scarf, decorated with tiny flowers, was once worn by a woman named Anna Lichter, who also attempted to escape from the Nazis on her way to an extermination camp. Lichter was shot dead by guards as she jumped from the train, but her 18-year-old daughter, Debora, who was traveling with her, managed to save the scarf and held onto it for the rest of the war.

This week, as Yad Vashem prepares to hold its first live ceremony after two years of COVID-19 closures, the museum has returned to life. Local and foreign visitors were there to learn and remember. Adjacent to the archive building, cranes and laborers were busy working to expand the existing storage space. A new, 65,000-square-foot center – The David and Fela Shapell Family Collections Center – will provide improved storage conditions for these precious artifacts and allow more of them to be displayed to the public; it is set to open in 2023.

Tal said the new space is greatly needed as the old archive is already cramped and new storage conditions will allow the items to be better preserved.

“It is so important that we collect and preserve these items for the future,” he concluded. “We are in a race against the clock to gather as many of them as possible because as time goes by, these items and their stories are being lost.”