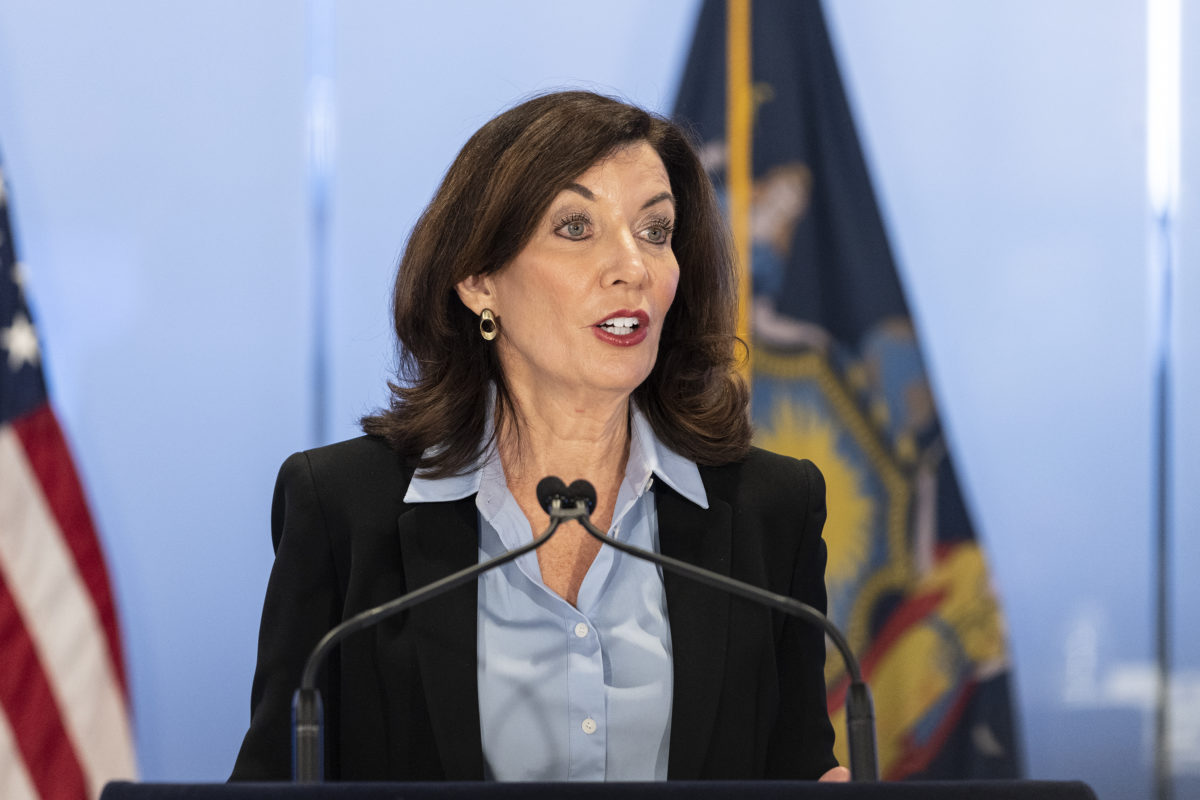 Governor Kathy Hochul speaks during announcement for the creation of a Joint Security Operations Center at MetroTech Commons.

Orthodox Jewish leaders from Queens and Long Island will announce their support for New York Gov. Kathy Hochul on Thursday afternoon at a campaign event in Far Rockaway, Jewish Insider has learned.

The endorsements — from a range of activists in Far Rockaway, Queens, and the Five Towns area of Long Island — are an early stamp of approval from New York’s sizable and politically active Orthodox community, which represents a potentially decisive voting bloc in the upcoming Democratic gubernatorial primary.

Hochul, 63, became the first female governor of New York last August after former Gov. Andrew Cuomo resigned in disgrace amid allegations of sexual impropriety. The Buffalo-born former lieutenant governor is seeking her first full term as she competes in the primary, scheduled for June 28.

According to a spokesperson for Hochul’s campaign, the Orthodox leaders who are now backing the governor include Phil Goldfeder, a former state assemblyman in southwestern Queens; Baruch Rothman, a rabbi and director of special projects at Yeshiva Darchei Torah in Far Rockaway; Cal Nathan, founding executive board member of Teach NYS, an educational advocacy group in New York; and Jonathan Katz, political chair of the Hebrew Academy of Long Beach.

In statements to JI, Hochul’s new supporters described the governor as a strong advocate of the Jewish community, praising, among other things, her commitment to addressing hate crimes in New York.

Hochul “has made it clear that there is no place for antisemitism in our state,” Katz said.

The governor is “laser-focused on improving the lives of every community,” Goldfeder added, describing Hochul as a “dedicated and pragmatic leader who understands the diverse needs of our neighborhoods and will continue to fight for all our families.”

“I’m so grateful to be endorsed by this dynamic group of Jewish leaders who represent the voices of the Five Towns and Far Rockaway community,” Hochul said in a statement to JI. “Since taking office, I’ve made it a top priority to address the rise in hate crimes against the Jewish community by strengthening public safety initiatives and investing in preparedness efforts of nonprofit organizations.”

Hochul assumed office last summer with a deep network of Jewish community connections that she built during her time as Cuomo’s lieutenant and, before that, during a brief stint as a congresswoman in western New York.

In her first public address to the Jewish community as governor, hosted virtually by the Jewish Community Relations Council of New York last November, Hochul emphasized her dedication to combating antisemitism and deepening the state’s connection with Israel.

In recent months, Hochul has aggressively courted support from New York’s Orthodox community, according to a prominent Jewish leader in Brooklyn who is familiar with her efforts but asked to remain anonymous in order to speak freely.

“She’s pushing extremely hard because she needs us,” the source told JI.

Rep. Tom Suozzi (D-NY), who is challenging Hochul in the Democratic primary, has also made overtures to Orthodox leaders in New York since announcing his gubernatorial campaign last December.

But the source told JI that Suozzi, whose district includes Queens and Long Island, “is just not taking off,” and suggested that Hochul is likely to receive additional support from Orthodox leaders following the Purim holiday next week. “There are going to be more endorsements.”

“As governor,” Hochul said in her statement to JI, “I will always be an ally to the Jewish community and will work tirelessly to deliver results to families of the Five Towns and Far Rockaway.”