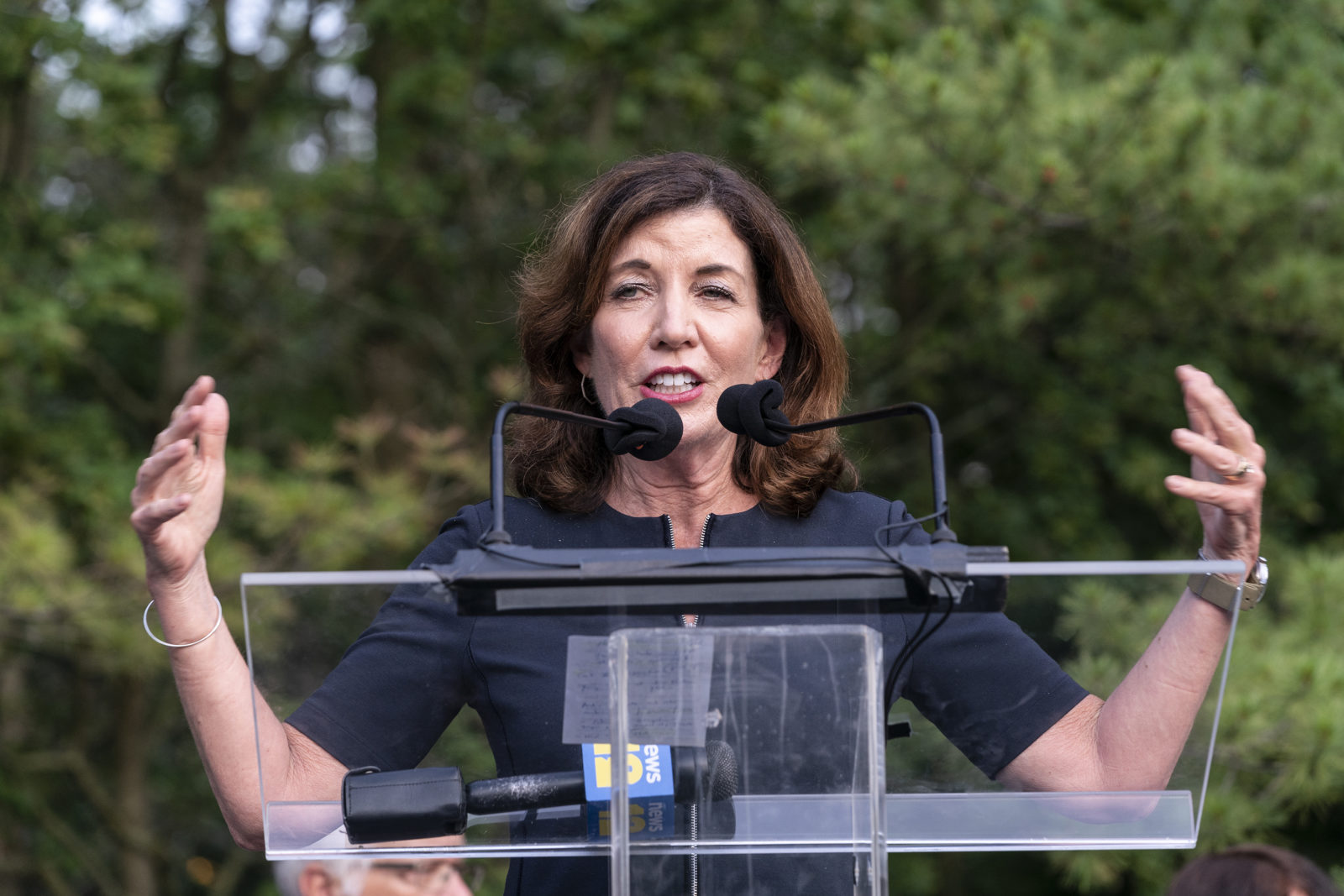 As New York Gov. Andrew Cuomo prepares to resign amid an escalating sexual harassment scandal, bringing his 10 years in office to an ignominous end, the spotlight is now turning on his immediate successor, Kathy Hochul, the Democratic lieutenant governor. Hochul, who assumed the office in 2015 following a stint in Congress, will become the first female governor of New York when Cuomo steps down in two weeks, a timeframe he detailed in a surprise announcement on Tuesday.

In his remarks, Cuomo described Hochul, his second-in-command, as a “smart and competent” lawmaker, emphasizing that she will “come up to speed quickly” after he vacates the governor’s mansion.

“It is the right thing to do and in the best interest of New Yorkers,” Hochul said of Cuomo’s impending departure in a statement on Tuesday. “As someone who has served at all levels of government and is next in the line of succession, I am prepared to lead as New York State’s 57th governor.”

The mild-mannered lieutenant governor from Buffalo represents a departure from the personality-driven governorships of such brash and ultimately self-destructive New York City natives as Cuomo and Eliot Spitzer, who resigned in disgrace amid a prostitution scandal in 2008.

But despite a low profile, Hochul, 62, is no doubt a familiar face among the scores of community leaders with whom she has built a deep network of connections while traversing the state over the past seven years.

The Jewish community is no exception. “She understands the importance of really advocating for every group of people,” said Anna Kaplan, a Jewish state senator from Long Island. “I believe she will be a big advocate for the Jewish community.”

Jewish leaders across New York say they expect Hochul to be a dependable ally in her role as governor, noting that she has long been sensitive to their needs and eager to follow up on a range of issues, including security grants, Jewish day school funding and hate crimes, among other things.

“Kathy Hochul has spent her years in office cultivating relationships with the leadership of the Jewish community,” David Greenfield, the Met Council CEO and a former New York City councilman, told Jewish Insider. “I vividly remember during the start of the pandemic how she reached out to me to offer to be helpful fighting food insecurity at Met Council. She’s accessible, transparent and is widely liked.”

Nily Rozic, a Jewish assemblywoman in Queens, said Hochul has often demonstrated her commitment to the Jewish community in a manner that extends beyond mere formality. In February of 2020, Rozic recalled, Hochul sat down with Ezras Nashim, the all-female Orthodox paramedic group whose bid to secure an ambulance in Brooklyn had been denied at the city level. “They were going through this rough transition trying to get licensing,” Rozic said of the organization, which she had invited to Albany.

Later that year, the emergency medical group found that its request had been approved — an outcome Ezras Nashim attributes to its meeting with Hochul. “She actually had just come in from Poughkeepsie from speaking and she made time,” Michael E. Pollock, the organization’s director of intergovernmental affairs, said appreciatively. “I have a strong belief that the lieutenant governor was able to reach out to the proper people and recommend that this is a fight that shouldn’t be going on.”

“We walked out of there feeling like we were heard,” Pollock told JI. “I don’t know what the female of mensch is, but I’m saying this in all sincerity: I genuinely like her.”

While Cuomo developed strong Jewish ties during his time in office — notwithstanding recent allegations of sexual impropriety — communal leaders emphasized that Hochul will be sworn into office with her own unique set of longstanding relationships.

“This is someone who’s not going to have to learn on the job the issues and needs of the community,” Maury Litwack, the executive director of Teach Coalition, a nonprofit educational advocacy group affiliated with the Orthodox Union, told JI.

Within just the past few months, Litwack said, the lieutenant governor had visited two yeshivas and spoken at a rally against antisemitism in Westchester. “I just find her to be someone who’s deeply in touch with New Yorkers and really cares about them,” he averred.

“We both lit Rabbi Butman’s giant Hanukkah menorah this last Hanukkah,” David Weprin,  an Orthodox assemblyman from Queens, said of the annual menorah lighting ceremony at Grand Army Plaza in Manhattan. “She’ll be a good liaison with the Jewish community, and I think she certainly has had plenty of preparation.”

That goes beyond her tenure as a statewide elected official, according to Weprin. In 2011, Hochul won a special congressional election in a traditionally conservative enclave of Western New York, but failed to defend the seat after redistricting two years later. Still, while in the House, Hochul positioned herself as a strong supporter of Israel, said Weprin, who told JI that the former congresswoman was “very involved” on matters impacting the Jewish state.

“Although she was in Congress briefly, she had a solid voting record on Israel,” Weprin said.

Michael Miller, CEO emeritus of the Jewish Community Relations Council of New York, said Hochul displayed a “firm grasp of the challenges Israel was facing” at the nonprofit organization’s annual meeting during her first term as lieutenant governor about five years ago. “Her identification with Israel, her knowledge of Israel — its challenges and its needs — was very up to date,” he told JI.

From a social services perspective, “she’s also well aware of the issues impacting the Jewish community and its network of agencies,” Miller said of Hochul, who often represented the Cuomo administration at meetings with Jewish organizations throughout the state. “Her relationships to date will serve her well.”

Hochul, who grew up Irish-Catholic, worked as a former lawyer and congressional aide before entering politics at the hyperlocal level beginning with a position on the Hamburg town board outside Buffalo. She served as a county clerk prior to mounting her first bid for Congress. While she now represents the entire state, Hochul remains “well-known and highly respected throughout the Buffalo Jewish community,” said Mara Koven-Gelman, director of the Buffalo Jewish Community Relations Council.

“She shares many of our community’s values and is particularly appreciated for advocating for women’s rights, strengthening civic relationships and combating hate,” Koven-Gelman told JI. “We look forward to working with her in her new role.”

Jacob Neiheisel, an associate professor of political science at the University of Buffalo, characterized Hochul as a “pragmatic” lawmaker who has evolved through the years. “She’s pretty good about coming around to wherever her constituency is,” he told JI, while adding that Hochul would “need to make a pretty big break from the Cuomo administration” if she has any hope of charting her own path free of the governor’s now tainted legacy.

“Hochul will be very different from Cuomo,” argued Robert Spitzer, a political scientist at SUNY Cortland, noting in an email to JI that the lieutenant governor “is not known for having a confrontational style.”

The chief question is whether Hochul “has the gravitas to be an effective governor, or whether she will serve as more of a caretaker,” Spitzer mused. “Her service as lieutenant governor has been as a booster of Cuomo’s agenda. While she is a centrist Democrat, like Cuomo, there will be a reservoir of good will for her, and the contrast in style between her and Cuomo may serve her in good stead, especially if she decides to seek a full term.”