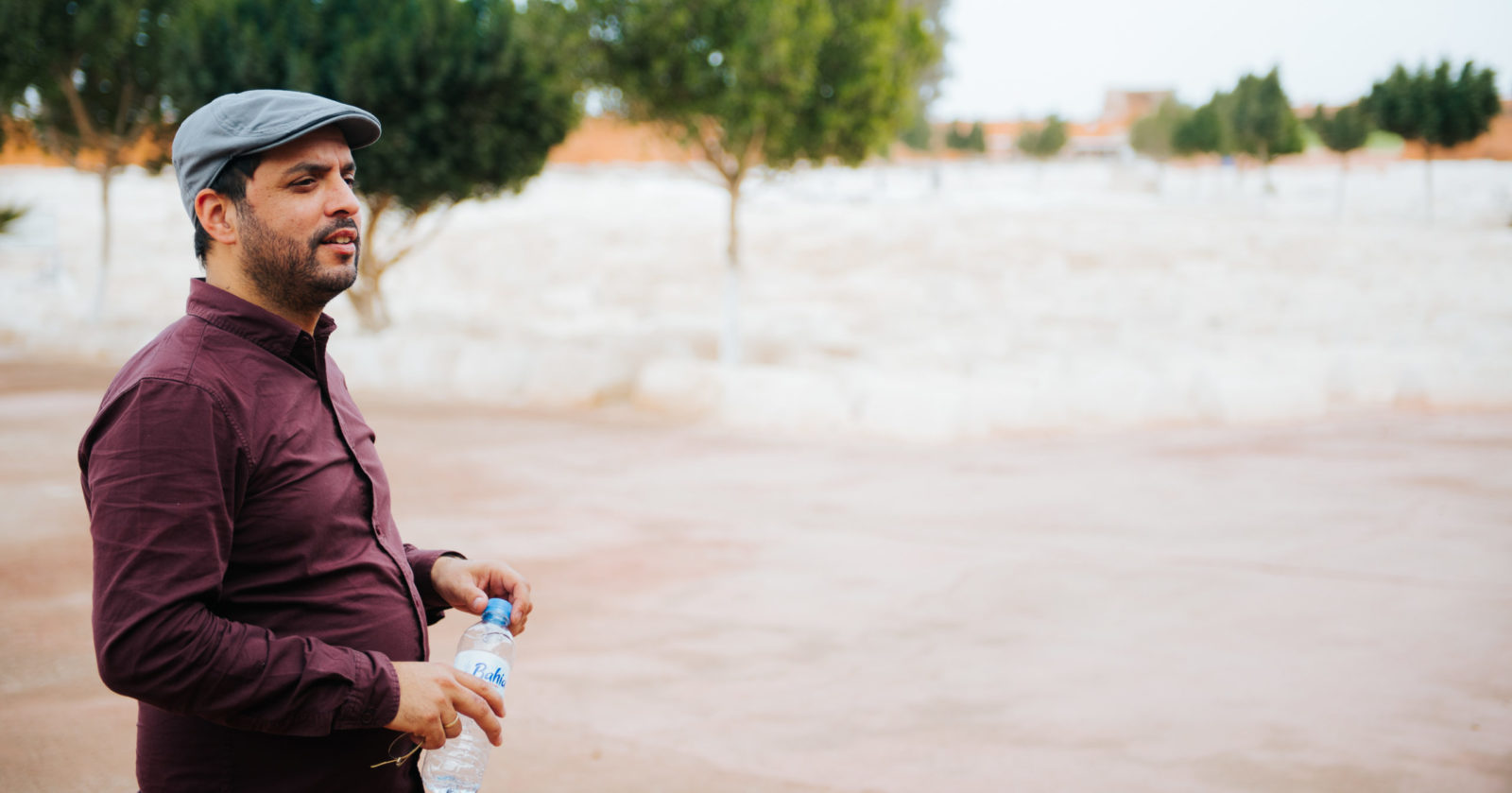 MARRAKESH, Morocco – With expert ease, Kobi Ifrach navigates the narrow alleyways of the Mellah, Marrakesh’s old Jewish quarter, ruffling the heads of small children and greeting stall owners selling tea and spices in the market, as if he’s lived here his entire life. But, despite his Mediterranean complexion and fluent Moroccan tongue, Ifrach did not grow up here. In fact, he was born and raised thousands of miles away in the small dusty town of Dimona – in Israel.

“All my life, I heard about Morocco and listened to stories about Morocco,” Ifrach, 39, told Jewish Insider of his childhood growing up in the southern Israeli development town, which has a sizable Moroccan Jewish immigrant population.

“On Shabbat, on holidays, I would always sit with elderly immigrants and hear how much they missed Morocco and the special connection they had with their Muslim neighbors there,” he added.

A child of immigrants – his father arrived in Israel from Fez, his mother from Marrakesh – who grew up speaking Moroccan Arabic, Ifrach said he always felt like somewhat of an outsider in Israel.

“Even though I grew up in Dimona, lived in Jerusalem, Tel Aviv and other places in Israel, there was always something in my culture, in my traditions that made me feel different,” he continued, explaining what prompted him to first visit Morocco in a pre-army trip at 18. Ifrach would return to the North African country multiple times while studying Islamic studies at Ben-Gurion University in Beersheva. He eventually obtained Moroccan citizenship and moved to his mother’s hometown permanently approximately five years ago.

“When I arrived here, I felt like I had returned home,” stated Ifrach, who went on to create, with a partner, Kulna, a nonprofit organization aimed at preserving and promoting Jewish Moroccan heritage in both Morocco and Israel.

Among the projects in his new home country, Ifrach has helped to build a museum dedicated to the Jews of Marrakesh, renovate the Jewish cemetery, and create study programs for young Israelis interested in learning about Moroccan Jewish life and culture. In all, he has brought more than 1,000 people to the Arab country to experience, in person, Morocco’s 2,000-year-old Jewish history.

“Morocco is the land of longing, not only for Jews of Moroccan heritage but for all Jews, regardless of their roots, and it’s the only place where you can touch and feel Jewish history that has been here for thousands of years,” he told JI during a recent interview at the Leaders of Tomorrow Summit, organized by Tel Aviv-based NGO Israel-is and the Mimouna Association, a Moroccan nonprofit that promotes and preserves Jewish heritage in Morocco.

Archeological discoveries suggest that Jews have had a permanent presence in this North African nation for more than 2,000 years, with the community greatly swelling in the 15th century with the arrival of Jews expelled from Spain and Portugal. Today, while the community has shrunk from an estimated 250,000 to 300,000 in the mid-20th century to only about 2,000 – most fleeing following waves of antisemitism after Israel’s creation –  those still living in the country remain openly and actively Jewish.

“Morocco is a special place because it is the only Arab country, maybe even the only country in the world, that has had an active Jewish community for so long,” David Biton, head of Jewish studies at Ono Academic College in Israel and an expert on the Moroccan Jewish community, told JI. “The community’s influence on the economy and the culture is amazing given its size, and although there are other Muslim countries such as Turkey and Iran that have Jewish communities, there is no Arab country like this.”

Biton, who also serves as Kulna’s chairman, explained that Moroccans are proud of their Diaspora communities, including Jews in Israel and all over the world. Unlike other Arab countries, Jews always held a special status in Morocco and even after their departure for Israel, were able to return and visit the country regardless of regional tensions or politics.

In Israel, Biton pointed out, Moroccan immigrants were always proud of their identity, which many were able to preserve in isolated and far-flung towns such as Dimona, nearby Yeruham and in the Galilee and clung to as they faced discrimination in Israel. In recent years, Moroccan culture, including the annual Mimouna celebration following Pessach, has become far more mainstream in Israel.

“They arrived with small suitcases filled with a rich culture,” he noted. “What Kobi is doing now is bringing back to Israel more of that culture, whatever did not fit in our parents’ and grandparents’ suitcases back then… He is taking the living memories, the living institutions and preserving them for the next generation.”

Ifrach said that it was during a visit to Morocco about seven years ago when he was struck by the fact that the community, made up mainly of elderly Jews today, was slowly disappearing.

“I realized that soon there would be no one left to tell their stories, to tell the story of the Jewish community that once thrived here,” he said, adding, “There was almost no minyan in the synagogue and the cemetery was not being looked after.”

He decided to begin documenting the stories of the Jews here in film and in writing, material that he used to form the basis of the museum that now fills the classrooms of the former Hebrew school surrounding the Slat al-Azama Synagogue in the Jewish quarter. He also brought a crew of volunteers from Israel to clean up the Miâara Jewish cemetery, the largest in the country.

It was in the ancient cemetery that Ifrach found validation for what he says is his calling.

“I had been living here and working as a volunteer for three years and could not decide if I should stay or go home,” Ifrach described. “I was 33 years old; all my friends were getting married and settling down in Israel, what was I still doing alone in Morocco?”

Ifrach, an observant Jew, decided to pay a visit to one of the many tzadikim, or holy sages, buried in the cemetery — Rabbi Pinchas Hacohen.

“I asked him to give me a sign about whether I should stay or return to Israel,” he recalled of the experience. “Afterwards, I went to the synagogue and by chance bumped into his grandson. I told him about my dilemma and that I was reluctantly getting ready to go back to Israel. Suddenly, he took me to his grandfather’s empty house and gave me the keys, saying I could stay there until I sorted myself out. I’m still living there today.”

Seven years later, Ifrach is married. His wife, Kimmy – whom he met on one of the trips to Morocco that he organized – and their newborn daughter recently joined him in Marrakesh. The two are working to set up “Dar Abraham,” a guest house and community center he hopes will serve Kulna Morocco’s activities, including teaching Hebrew to the local non-Jewish population and offering cultural, educational and volunteering activities for tourists.

And while Ifrach began his work long before the governments of Israel and Morocco agreed to establish full and open ties in December 2020, he said that the normalizing of relations has certainly boosted Kulna’s activities in both countries.

The new arrangement, he said, “is helping me to build these bridges; if, in the past, there were suspicions, now everything – the exchange of ideas and culture – is flowing and my goal is to bring as many young Israelis and Jews to Morocco as possible.”

“I want to tell Morocco’s story,” Ifrach concluded. “Morocco is a country with so many ethnicities and they all live together under one identity, under one leader – I think Israelis and Jews everywhere can really learn a lot from here too.”

This story is part of a series on the Israel-Moroccan relationship developing following the signing of the normalization agreement in December 2020. Eglash was a guest of the ISRAEL-is at the Leaders of Tomorrow Summit in Marrakesh.